These days the controversies around the media are about fake news, marketing gimmicks and overall dumbing down. But amidst all the noise, the issues about what constitutes news and how to make the truth reach the people still remains, even if online platforms have replaced the good ol’ newspaper for many readers.

A very well received Marathi play, Don Special, raises questions that hardly anybody asks any more about journalistic ethics. Adapted (from HM Marathe's News Story) and directed by Kshitij Patwardhan, Don Special (Two Special) is set in a newspaper office in the late 1980s. The space looks like it is falling apart, but values in Indian society have also started to decline with the rise of big business, the powerful builder lobby, talk of liberalization, the politician-industrialist nexus, increasing corruption, that are bound to affect the media. In the midst of this upheaval, Milind Bhagwat (Jitendra Joshi), who works with a Pune paper called Dainik Hindustan, tries to uphold his principles and that of the newspaper, established with the idealism that drove post-Independence journalism. 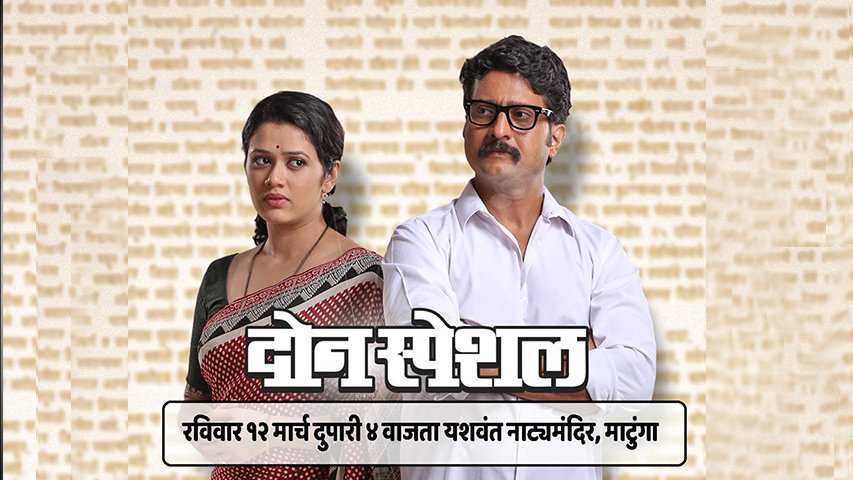 One evening, when Bhagwat is on the night shift, news comes in of the collapse of a wall of an under-construction cultural centre building, that killed a family of three.  Bhagwat has in his hands the heart-rending photograph of a little girl, who has lost her parents and infant brother in the horrific accident, obviously caused by negligence. He plans to put that photo on the front page, with the news over three columns, naming the builder.

When the paper is about to be put to bed, a woman arrives.  She is Swapna (Girija Oak-Godbole), who used to be Bhagwat's girlfriend.  Ten years ago, she had left him without explanation. They have both moved on and married other people, but it is soon clear that Bhagwat still carries the pain of the long-ago rejection.

Her visit is not casual—she is the public relations officer of the construction firm, and it has been her duty over the evening to approach all the papers and get them to drop the name of the builder from their news reports. She has “managed” the others and hopes to do the same with Dainik Hindustan. If she can’t persuade him, she is at a risk of losing the job that she badly needs.

Over the next couple of hours, they talk about themselves, their not-too-happy lives, and the state of journalism, about which Bhagwat is disgusted, what with the growing power of advertisers and PR companies.

The performances are fine, but the impeccable set (Pradeep Mulye) and sound design (Anmol Bhave) are the highlights of the production. The computer generation may not have heard the clatter of a newsroom with its typewriters, teleprinters and the printing press, that has been reproduced with such accuracy.

The play has done well and appealed to audiences, because there are many who are disillusioned by the way things are in the Indian socio-political scenario; compared to the major scams today, the incident of a wall collapse seems insignificant. Which is why it is a test of a journalist’s compassion and integrity, and, indirectly that of the audience too.