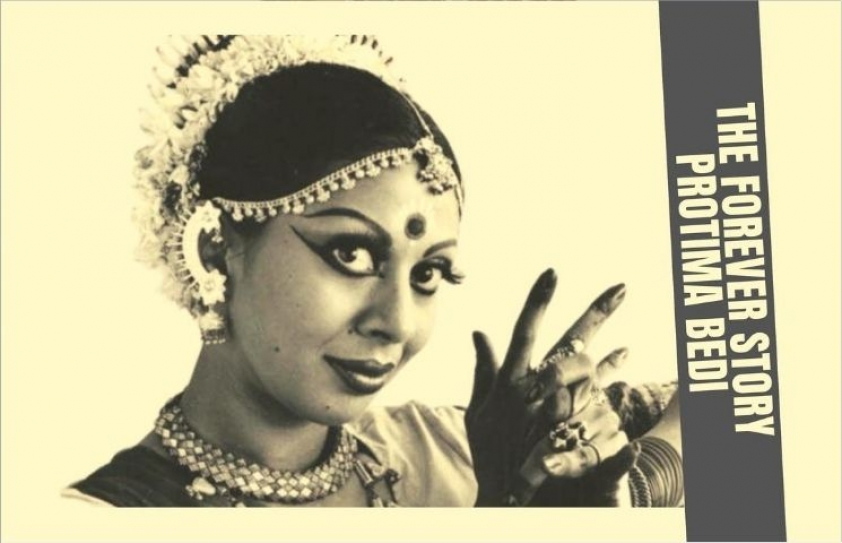 Humra  Quraishi writes that Protima Bedi, was the quintessential modern Indian woman who had once written her own destiny

She passed away twenty two years ago on  August 18 1998, in Pithoragarh; in a landslide. Much before I had met and interviewed Protima Bedi, I’d  been seeing her around the  capital city of India, New Delhi.

She always stood out in a crowd and seemed omnipresent while she was alive. Never alone, she was always in the company of a male friend, always one that was a well known face and suave - there was no derth of them in the New Delhi of those days.

Whenever I got a glimpse of her, she’d be wearing simple  cotton  clothes; most often the traditional mundu (Kerala’s two piece sari), tied low on her slim waist. The emphasis of her clothing would be on the tiny choli she’d be wearing. Not even the short-sighted could help but see her lazily camouflaged or just- about-somewhat covered breasts!

I would notice how she’d carry her beauty sans make up, except for a big-sized bindi and lipstick perfectly shaped around her thick lips. Her pout caught attention and she knew it. She was attractive and she was aware of the fact, that people were staring at her. Her  gait  was  confident  and even  when wearing the simplest of sari’s she’d look different. 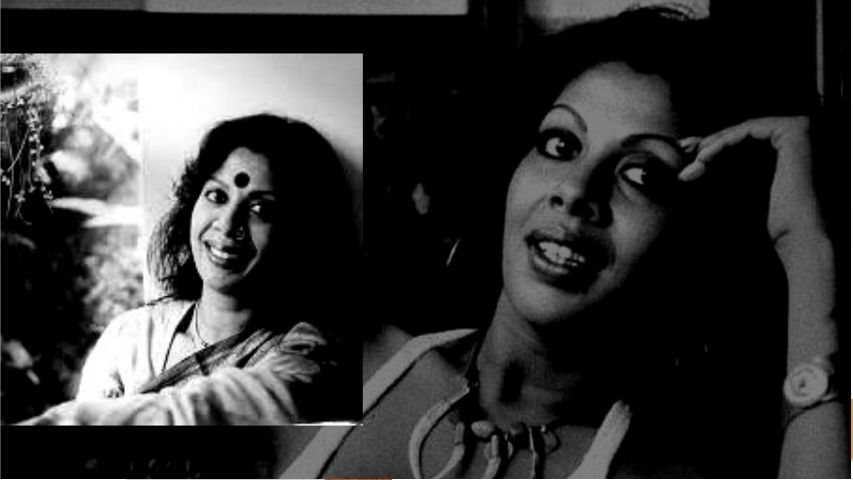 I met Protima Bedi and spoke to her informally at several social gatherings but a detailed interview with her came about when she was all set to dance  before the newly formed forum - Association of British Scholars (ABS). With that, she was also going to be raising funds for her dance school -  Nrityagram, which she had established in Karnataka.

And, as the interview progressed, it was apparent to me that she was not comfortable in answering queries related to the then tallest political figure of Karnataka, Ramkrishna Hedge, whose name hers was linked with at the time. To every question asked about her relationship with him, she said, “If that is true, then I wouldn’t be begging for money for my dance school… at the moment I’m like a beggar asking people to contribute anything from a hundred to ten thousand rupees and no, I’m not giving up. No way!”

But  didn’t  her  dance  school  get ample funds from the Department of  Culture? “Of course we have got some funds but we need more. After all, I’m taking our traditional dance form to rural areas because that is where it belongs. Why should cultural dance forms be limited to urban elite and be viewed only in air-conditioned auditoriums? Today we have more than 200 village children coming to learn different forms of our traditional dance and we have eighteen residential students as well. It’s a dance village I am trying to create and run.”

But how is it that, with a network of such powerful people – men in particular, she is facing so many problems with funding? Don’t tell me, you’re reduced to begging, I asked her. 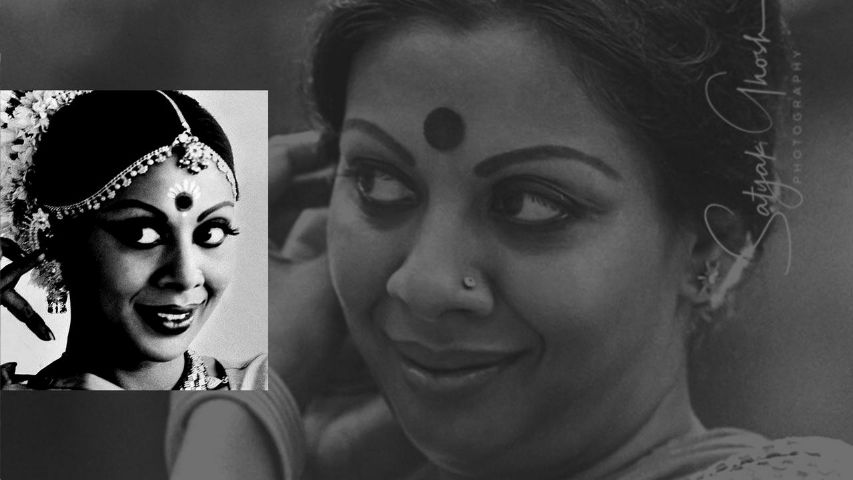 “What men! What contacts are you talking about? I’m so involved in my dance village that I don’t have any time to think of anything else. Our day starts early in the morning, we do all the work ourselves; cooking, cleaning, washing and teaching. I am determined to continue with what I am doing. I’m very strong willed and even if I have to starve, I will not give up.”

Starve? Starve for what? “Obviously for food! What else!” she retorted.

Then she explained to me that traditional dance forms must be taught to women and that the time had come for women of the country to be given their freedom in the actual sense of the term. “How can I rest in peace when so many injustices are taking place? Look at the way our women are suppressed? Look at the crap going on in the name of culture!”

I joked with her while also asking her that, wasn’t there a contradiction in her dancing for the urban elite while talking about rural India? She hit out at me. She said, “I’m doing this to collect funds. It’s for my dancers. For the village and to sustain my work there. My dance school is my passion and I’m one of those women who never gives up. I will do anything to achieve my goal”.

Nrityagram is India's first modern Gurukul (residential school) for Indian classical dances and an intentional community in the form of a dance village, set up by Odissi dancer Protima Gauri (Bedi), in 1990.

Designed by famous Indian architect Gerard da Cunha, the community is situated near Hesaraghatta Lake, 30 Kilometers from Bengaluru. Today the Nrityagram Dance Ensemble has performed across India and in many countries abroad. 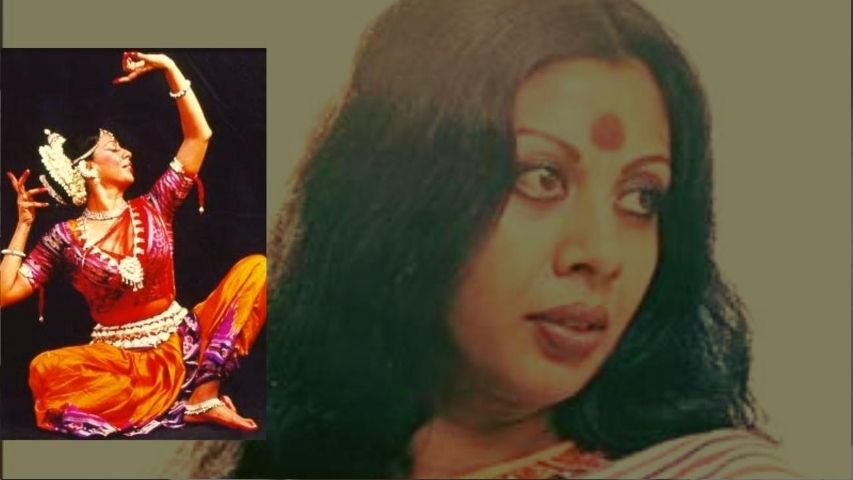 The word Nrityagram, literally translated, means - dance village; and in founder, Protima Gauri's own words, "It is a community of dancers in a forsaken place amidst nature - a place where nothing exists, except dance. It is a place where you breathe, eat, sleep, dream, talk, imagine dance. A place where all the five senses can be refined to perfection. A place where dancers drop negative qualities such as jealousy, small-mindedness, greed and malice to embrace their colleagues as sisters and support each other in their journey towards becoming dancers of merit."

Protima left Mumbai in 1989 to start the dance village; the land was given on lease by the state government and by 1990, the institution had taken root. The building started coming up soon after, following the vernacular architecture of the region. The Nrityagram Dance Ensemble made its New York debut in 1996 and received rave reviews.

After suffering a mild heart attack, Protima formally handed over Nrityagram to Lynne Fernandez, a Delhi-based theatre actress and light designer, in 1997. Subsequently, she set off on a pilgrimage to Kailash Mansarovar and it was there that she died in the Malpa landslide near Pithoragarh.

Since then, Nrityagram has grown in its stature by leaps and bounds and is known today for some of the best ensemble work in India. Perfection in dance along with a high level of good technical support, leading to a complete presentation, is its trademark. Even today, gurus and students work in the fields within the Nrityagram, which has 10 acres of land, and where they grow their own food.