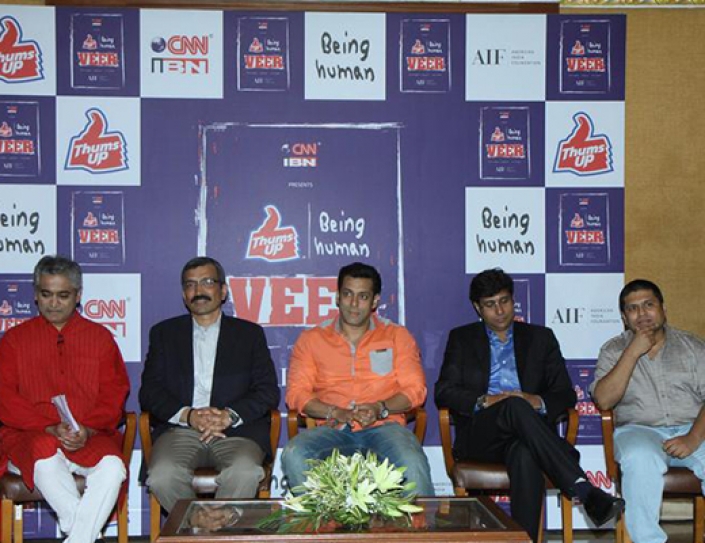 CNN-IBN, Thumbs Up And Being Human Presents VEER Season 2 In Association With American India Foundation.

New Delhi, 29 September 2015: In an effort to unleash the inner potential of people with disabilities and provide them the best employment opportunities, CNN-IBN is back with its one-of-its-kind initiative ‘VEER Season 2’ in partnership with Thumbs Up, Being Human and American India Foundation. The show aspires to exhort and educate the citizens of India to play the role of an enabler and make people with disability discern their true potential.

Started from 24th September 2015, VEER Season 2 is a campaign of strength and self-belief to generate awareness and advocate for inclusivity, accessibility and employability of people with disabilities (PwDs). After receiving an overwhelming response for its first season, VEER in its second edition aims to drive an amount of INR 2 crores for training 2000 PwDs.

In this phase of the campaign, CNN-IBN will also be associated with, the Indian government’s Department of Social Justice and Empowerment and Hans Foundation, an NGO operating in the area of empowering marginalised sector in disability space, to provide skill for training people with disabilities (PwDs). The government body and NGO, both will eminently work with the channel to train and employ the PwDs.

Speaking about the campaign, Mr. Radhakrishnan Nair, Managing Editor, CNN-IBN, said, “We are grateful to receive the support from Thumbs Up, Being Human and American India Foundation for the campaign. It is our pleasure to work on such an innovative program and we hope to receive an overwhelming response from the audience.”

Debabrata Mukherjee, Vice-President Marketing and Commercial, Coca-Cola India, said, “The Thumbs Up philosophy of being passionate and strong is something that drives this program. Through VEER, we want to encourage all the differently abled to unleash their potential, be strong and overcome the barriers they face. We are happy with the achievements of the program in its first year and are excited about the milestones being set for the second phase, where our endeavour will be to accelerate the pace and double the deliverables of the first year.