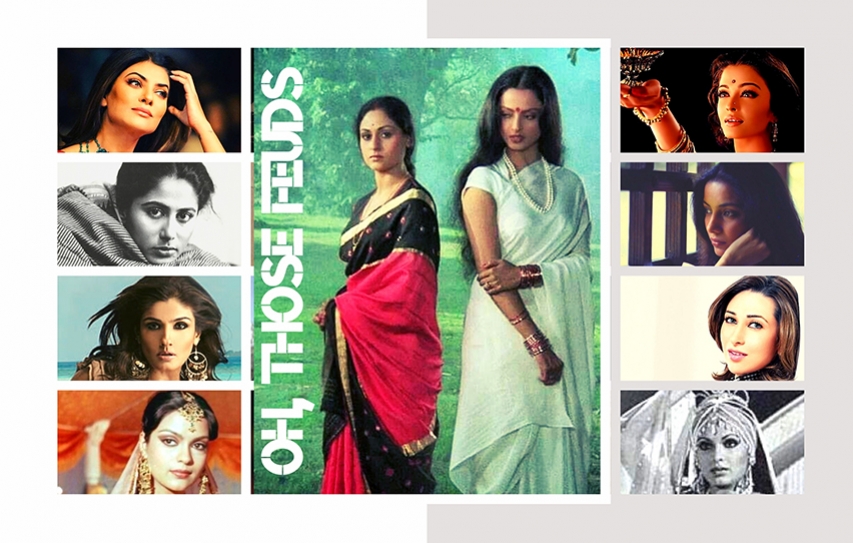 Feuds between the actresses of Bollywood would make for spicy reading in magazines before the emergence of the social media. Whenever tidbits about hostile vibes were reported from the studio sets, invariably the film turned out to be a crowd-puller.

Frosty vibes between Raakhee Gulzar and Sharmila Tagore made news during Yash Chopra’s first independent go as a producer Daag. Similarly, years later there was no love lost between Kareena Kapoor and Bipasha Basu during the overseas shoot of Abbas Mustaan’s thriller Ajnabee. Kareena was stated to have called Bipasha a ‘Kali Billi’, leading to much brouhaha in the fanzines of the day.

Here’s revisiting some of the rivalries, then in the times when misogyny was even more real than it is today, were called  ‘catfights’ between leading actresses which was grist for the gossip mills: 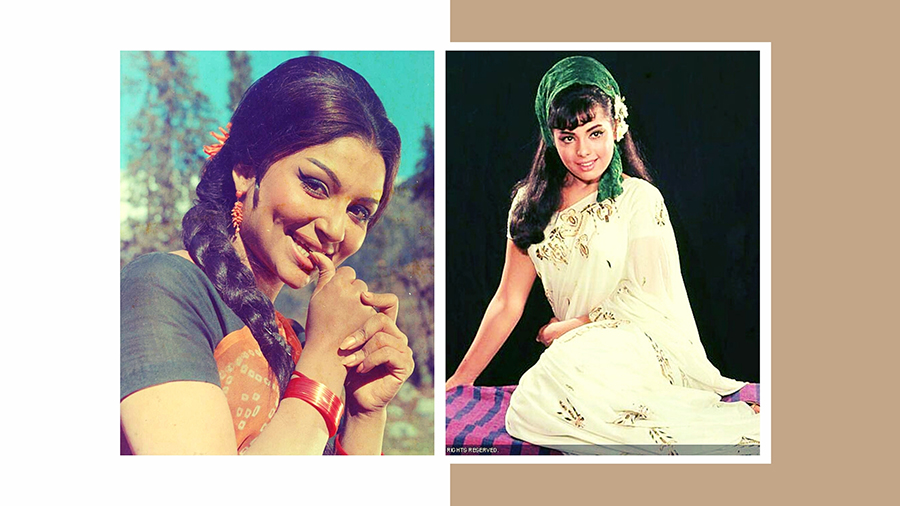 A-list heroines Sharmila Tagore and Mumtaz had proved to be hit pair with the then-superstar Rajesh Khanna. Both the heroines were obviously keen to be signed up in as many projects with ‘Kaka’. Sharmila and he sought to woo the audience with Aradhana, Amar Prem, Safar, Chhoti Bahu, Badnaam Farishte, Maalik, Raja Rani, Daag, Aavishkar and Tyaag.

With Mumtaz, Kaka was seen in Bandhan, Do Raaste, Sachaa Jhutha, Dushman, Apna Desh, Aap Ki Kasam, Roti, Prem Kahani and finally Aaina (albeit in a relatively brief appearance). The superstar’s fans felt he made a perfect pair with both. It was another story that the two heroines tried to ensure that one’s chemistry rocked way more with Rajesh Khanna than the others. 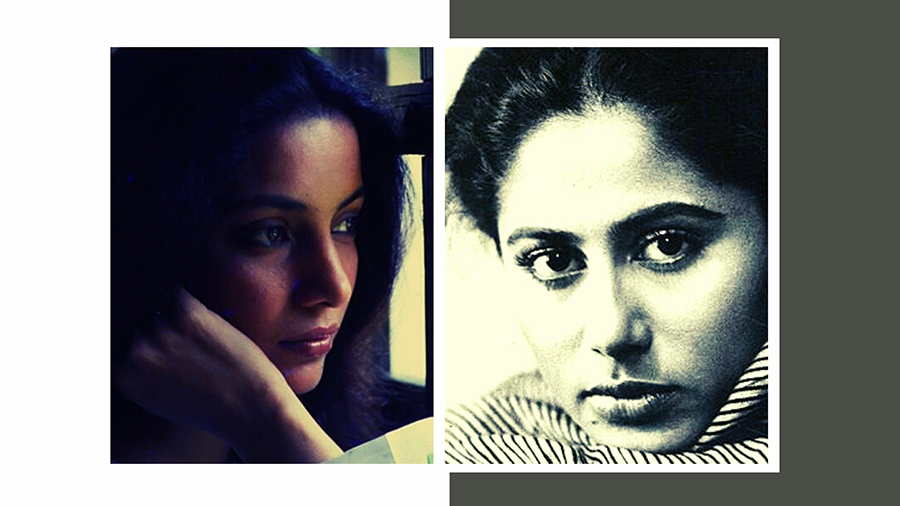 Smita Patil and Shabana Azmi had plenty in common. The arrived from similar social reformist backgrounds and were both showcased by Shyam Benegal. And, they became the faces of the parallel cinema in the mid 1970s, defying the conventions and tropes of commercial movies.

Eventually, both did venture into the mainstream, Shabana with Fakira, Amar Akbar Anthony and more while Smita played key roles in biggies like Namak Halaal and Shakti. They acted together in Nishant, Arth, Oonch Neech Beech, and Mandi in which Shabana played the older woman Rukmani Bai and Smita the younger Zeenat. There were constant comparisons and unpleasant bickering between the two actresses till Smita Patil passed away within a short career span in 1986. 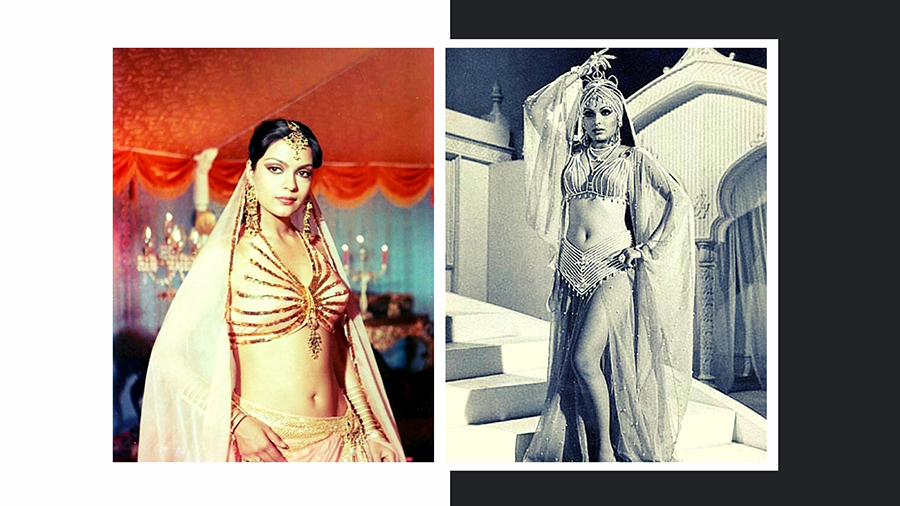 Zeenat and Parveen transformed the face of Bollywood cinema. Their westernized attires, Anglicized accents and well-sculpted bodies became the norms for the future generations. Though both of them never seemed to have issues with each other, the media created a rift since they both replaced each other in high-profile films. Zeenat was offered Amar Akbar Anthony, which was eventually done by Parveen. And Zeenat did Parveen’s role in Laawaris.

In public, they were cordial with each other and went on to co-star in Ashanti, Mahaan and Ameer Aadmi Gareeb Aadmi until Parveen Babi quit the industry. According to Zeenat there was never any enmity since actresses those days were a group of friends who didn’t indulge in unhealthy competition. Yet there has been considerable controversy about the two vying for each other’s roles. 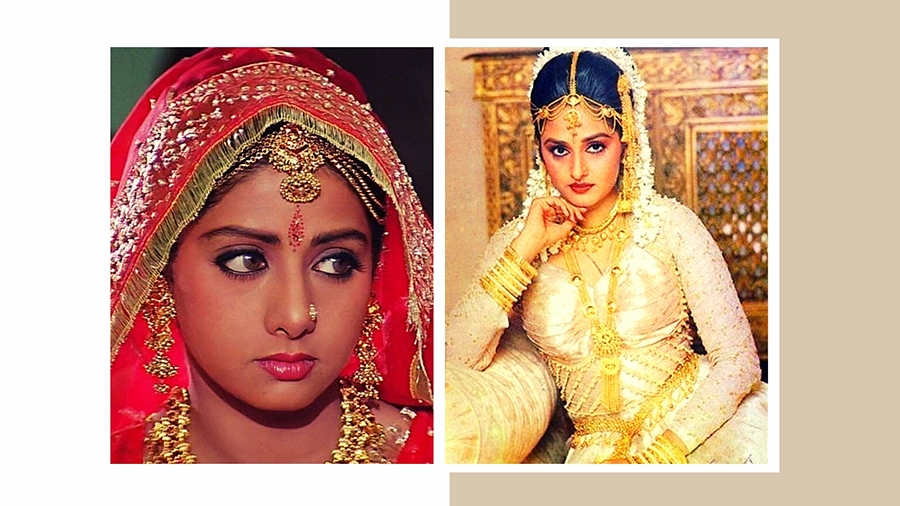 The southern heroines debuted in Hindi cinema in 1979 - Sridevi with Solva Sawan and Jaya Prada with Sargam. They went on to co-star in such hit potboilers as Tohfa, Maqsad, Aulad, Mawaali, Naya Kadam and Aakhari Raasta, until a silent war erupted.

It was said that during the shooting of Tohfa, Sridevi was supposed to die in Jaya Prada’s lap, But Sridevi’s mother intervened and stopped her daughter from shooting the scene, arguing that Jaya Prada would get away with the audience’s sympathy. The arch-foes finally spoke after 25 years, denying canards about a rivalry. Yet a story goes that, Rajesh Khanna and Jeetendra did lock them up in a Hyderabad studio’s make-up room during the shoot of Maqsad, hoping there would be reconciliation. After two hours, when the door was opened, they found the two heroines, sitting in opposite corners, absolutely silent. 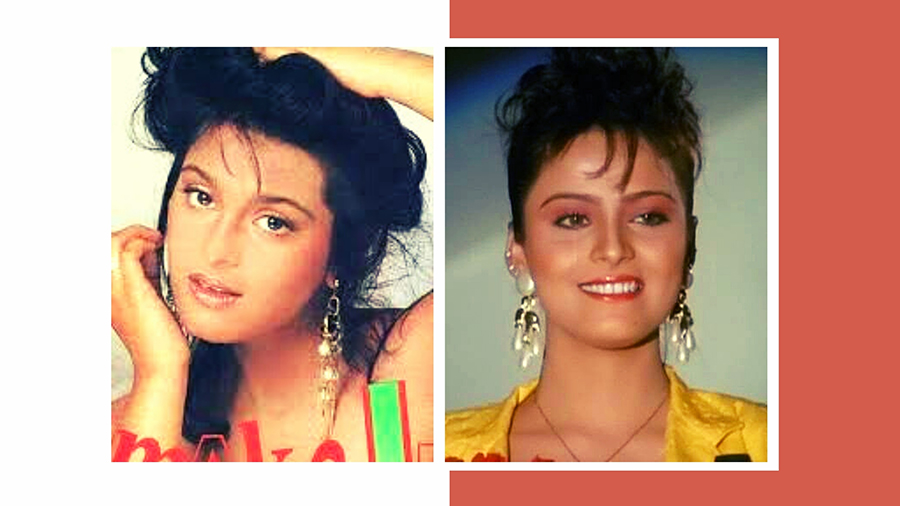 The late 1980s and early ’90 witnessed an emergence of several new faces in Bollywood. Shilpa Shirodkar and Ektaa (now Bahl married to Mohnish) were amongst them. They were both from Bandra and had studied in the same school, and were said to have an uncanny resemblance to each other.

Initially, Ektaa (real name Aarti) was flying high as she had bagged Dev Anand’s Awwal Number opposite Aamir Khan. As for Shilpa, she was recommended to be heroine by both Mithun Chakraborty, and Anil Kapoor, opposite whom she bagged Rakesh Roshan’s Kishan Kanhaiya. However Ektaa made a wrong career choice by appearing in a little-known sleazy flick directed by Sunil Khosla, which upset her mentor Dev Anand.  By comparison, Shilpa had a longer innings with the support of her secretary Rikku Rakeshnath.

Incidentally, besides Awwal Number some of the noteworthy films, which Ektaa did before getting married to Mohnish Bahl were Solha Satra, Vansh, Fateh, Tahalka and Khatraa. Among Shilpa’s claims to fame were Trinetra, Hum, Khuda Gawah, Aankhen, Mrityudaand and artist M.F. Husain’s Gaj Gamini. 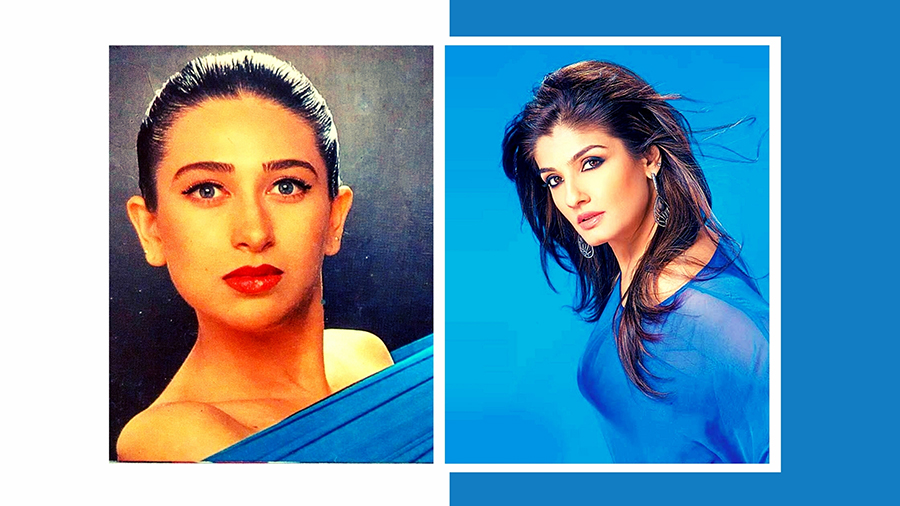 Both were in terrific form in the 1990s. Although Karisma made an impact with her first few films like Prem Qaidi and Jigar, she was severely criticized for dancing to the song Sarkailo Khatiya  with Govinda in David Dhawan’s Raja Babu.

Raveena Tandon had made a promising debut opposite Salman Khan (fresh after the success of Maine Pyar Kiya) in Patthar Ke Phool. Both were in competition to act opposite Ajay Devgn who snubbed Raveena often in favor of Karisma. Be that as it may, the young heroines co-starred in Andaaz Apna Apna and Aatish.

During the making of Aatish, there was a major showdown when the song Ya Mustafa Ya Mustafa was being pictured. Raveena blamed Karisma reportedly, for sabotaging her career as she, in a couple of films, had replaced her. Such was the rift between the two actresses that they refused to pose together for the paparazzi at one of Shah Rukh Khan’s Holi parties. 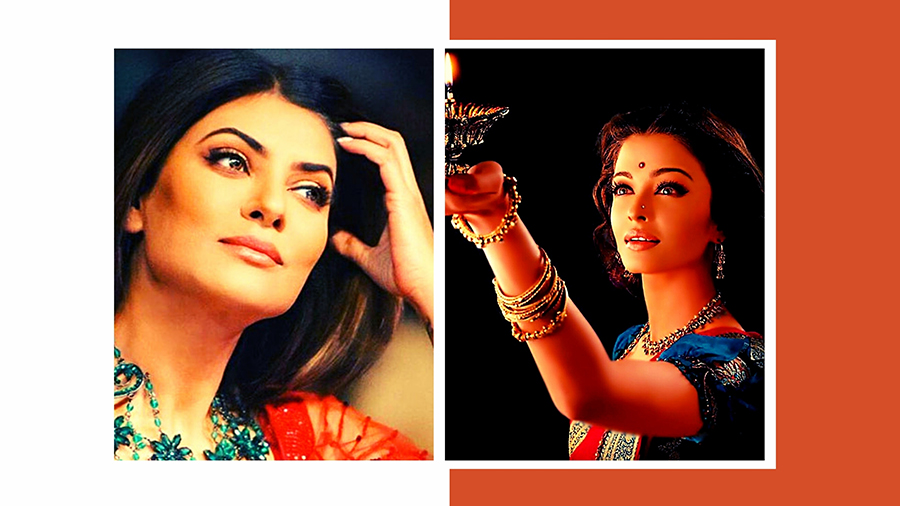 They were competing for the Miss India title. While Aishwarya was a known face and a favorite of the pageant crowd in Goa, Sushmita’s personality and confidence stunned the jury. As backstory goes, Sushmita had almost dropped out of the pageant on hearing of Aishwarya’s participation in the contest, but her mother asked her to stay put. She did and ended up winning the Miss India as well as the Miss Universe titles. Aishwarya, on the other hand, won the Miss World title.

Lore goes that as the date of the Miss Universe contest was nearing, Sushmita had misplaced her passport and was advised to let Aishwarya represent India at the pageant and told that she instead, could compete at the Miss World pageant later. Fortuitously, the authorities in New Delhi organized a temporary passport and visa for Sushmita at the last minute. Clearly, she had an upper hand in the beauty pageant sweepstakes.

Yet a cold war between the two was endemic. Aishwarya made her movie debut with Mani Ratnam’s Tamil film Iruvar and then Aur Pyar Ho Gaya, while Sushmita debuted with the thriller Dastak. Both the Bollywood films tanked at the ticket counters but they were here to stay with their upcoming projects. Sushmita, with Biwi No: 1, and Aishwarya, with Hum Dil De Chuke Sanam, found acceptance by the masses. By the way, the grapevine had murmured a couple of years ago, that they would come together in a major Bollywood extravaganza - turned out to be a false alarm. 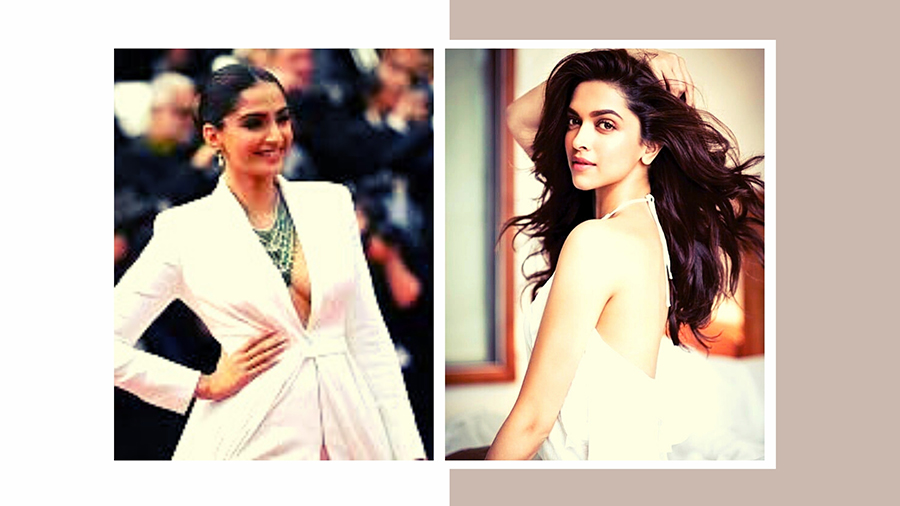 They were both introduced to the screen in 2007 with Saawariya and Om Shanti Om. Both the big banner films clashed, as they were Diwali releases. There was tremendous curiosity about the debutantes. Deepika’s Om Shanti Om was a major hit. Sonam’s Saawariya was not. There were rumors linking Sonam with Ranbir Kapoor but the actor went on to get involved with Deepika. That relationship went pffft when Ranbir next moved on to Katrina Kaif.

Sonam and Deepika made a joint appearance in  Koffee with Karan, and ripped Ranbir Kapoor apart. Viewers were pleasantly surprised about this new friendship, which obviously did not last long. Reason - Sonam took several digs at Deepika in the next season of the controversial talk show.