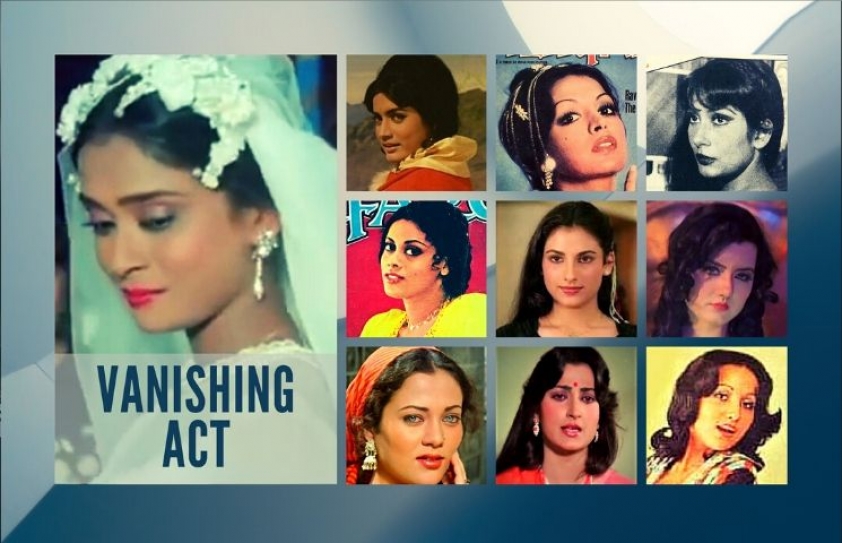 Film historian Dhruv Somani writes on the 10 actresses who just upped and shunned the limelight.

So many stars come and go but linger on in our minds. Through their work they built a certain bond with their fans that had collected their films, posters and interviews from various magazines. There was a direct connect between them.

Today, since many of them are active on social media, fans are delighted to see them regularly through their posts on different platforms, where they command a huge following. Like Sushmita Sen who has made a comeback after a decade with the series Aarya, scoring 10 million views in a single day for the trailer.

But there are others (Kimi Katkar, Anjali Jathar, Nivedita, Rinku Jaiswal included) who just upped and vanished from the Bollywood scene. Today, I am writing about ten more actresses who gained popularity but preferred to do the vanishing act. 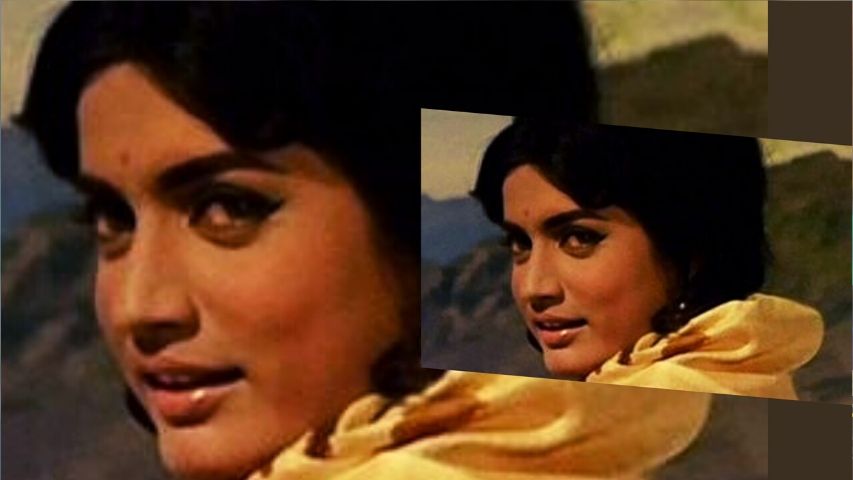 Daughter of the master filmmaker V.Shantaram and actress Jayshree, she made appearances in her father’s Subah ka Tara and Stree, and went on to find roles in Grahasti and Ghar Basake Dekho, both opposite Manoj Kumar in the early 1960s. Reportedly during the shooting of Around the World opposite Raj Kapoor, she met an American student Greg Chapman and a friendship developed between them. They kept in touch until she married him after three years and later shifted to Los Angeles, never to return to Bombay showbiz. 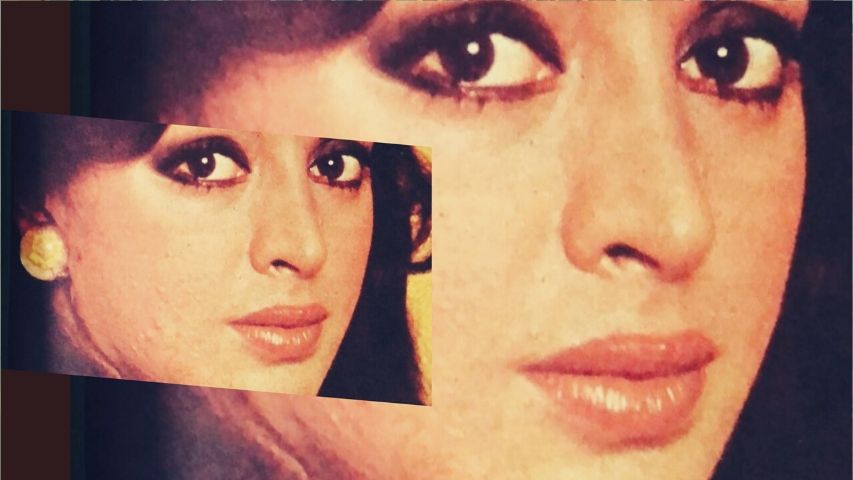 She made her debut as a Bond girl in Her Majesty’s Secret Service (1969). Next, she appeared in Gambler with Dev Anand (1971) followed by the controversial Call Girl opposite Anil Dhawan. The film was a hit, which followed a line-up of films like Toofan Aur Bijlee, Zinda Dil, Ek Hans Ka Joda, Dharmatma and Aadmi Sadak Ka among others. She also acted in some Punjabi films and was last seen in the film Shakka (1981) opposite Jeetendra. Fans are keen to know her whereabouts but in vain. 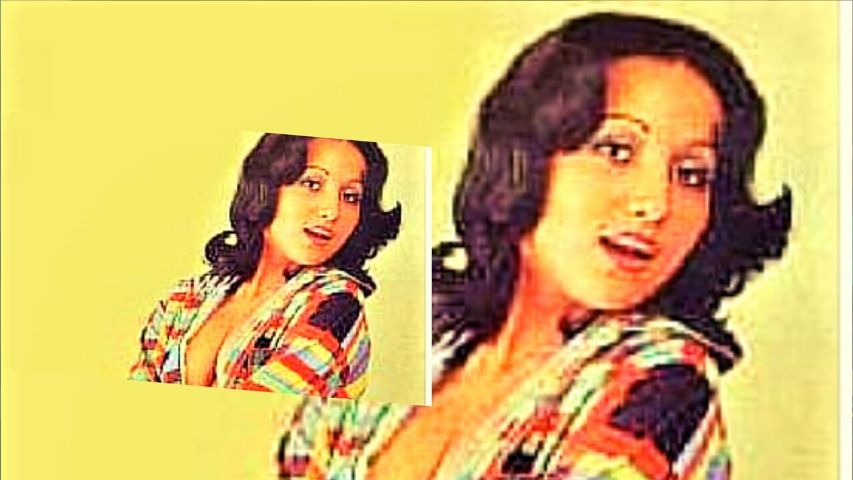 Uninhibited and alluring, she made her debut in Dev Anand’s Ishq Ishq Ishq. Known for her bold roles, this spice girl featured in a batch of supporting roles, namely Faslah,  Goonj , Chori Mera Kaam, Naagin, Bhala Manus, Yahi Hai Zindagi, Dream Girl, Ab Kya Hoga, Darinda, The Burning Train  and Plot No: 5. If memory serves me right, she was last seen in Eenth Ka Jawaab Patthar  (1982). From her social media accounts, it can be arrived at, that she is married and settled in the U.S. and is a famous Astrologer and healer who goes by the name of Komilla Virk Sutton. 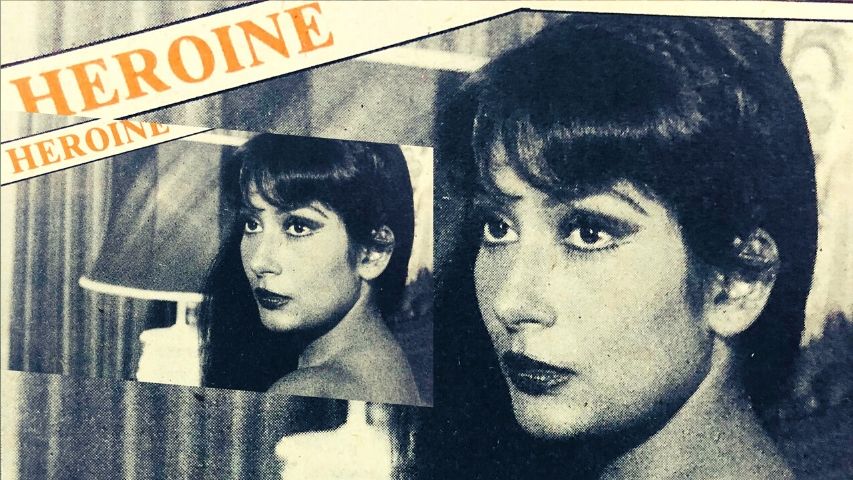 Exuding sex appeal, she was introduced by Kishore Kumar in his film Badhti Ka Naam Daadhi. Sheetal was confident about making it big but her dreams crashed as the outrageously kinky comedy bombed. Bereft of offers, she took on supporting roles. However, success came to her when she opted for no-holds barred vamp roles. Films like Heera Panna, Joshila, Inkaar, Darwaza and Jaani Dushman kept her in the limelight, and especially the Hrishikesh Mukherjee-helmed Bemisaal (1982), featuring her as the wily Ruby Dutt in the company of Amitabh Bachchan.

Dissatisfied with getting stereotyped, she piloted her own film Honey (1982), with actor Pradeep Kumar, for which she multi-tasked as producer, director, script writer, music composer, no less, under the name of Sheetal Kalamadir. There were rumors of some Gulf connection funding the project, which she vehemently denied. She was last seen in the Ramsay Brothers’ Tahkhana. Some believe that she directed a film titled Rose Thorn in the early 2000s but efforts to track her down for interviews have been futile. 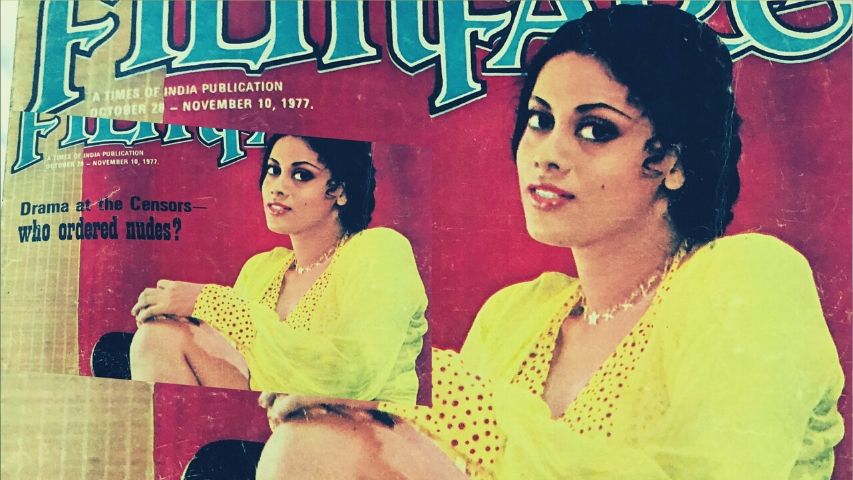 Crowned Miss India in 1971, she became a model who essayed a variety of roles, both of the negative and demure kind. Her first film was Mahesh Bhatt’s Manzilein Aur Bhi Hai (1973) opposite actor Kabir Bedi. And she also played the lead in the films Mere Saath Chal, Maa Bahen Aur Biwi and Jab Andhera Hota Hai, circa 1974.

She was seen in the ensemble casts of Naagin, Haiwan, Swarg Narak, Ghar, Umrao Jaan, Hotel, Barsaat Ki Ek Raat and Mangalsutra, all in 1981. Her songs in Armaan,  Ramba Ho Samba Ho and Meri Jaisi Haseena became chartbusters. She was last seen in Basti Badmaashon Ki in the year 1999. Today, she avoids the Bollywood glare totally. 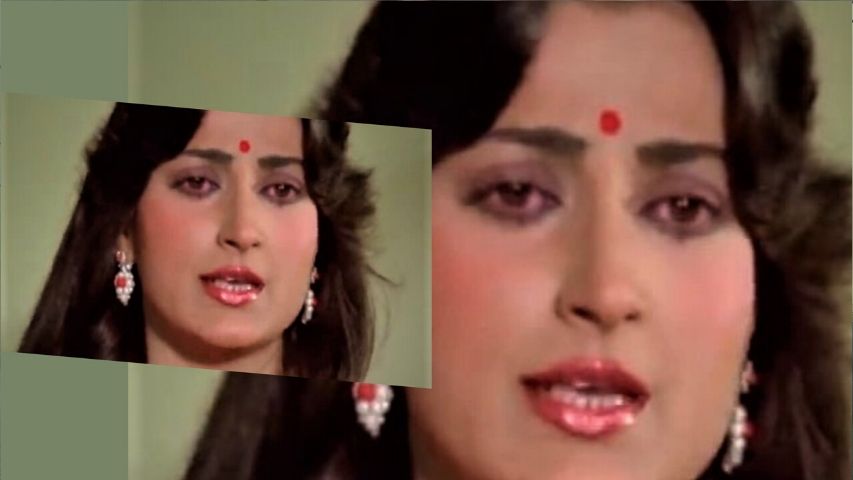 Neeta Mehta made a promising debut opposite Randhir Kapoor in Ponga Pandit (1975). She was next seen in Yehi Hai Zindagi, Main Tulsi Tere Aangan Ki, Jaani Dushman, Shaayad, Naari, Humse Badhkar Kaun and Ram ki Ganga (1984). She was prominent in hits like Kaamchor (1982) and Hero (1984), opposite Sanjeev Kumar. She was linked with Sanjeev Kumar but the rumors fizzled out soon. She was last glimpsed in a brief role in the Rekha starrer Aurat Aurat Aurat in 1996. According to the grapevine she seems to have settled in the U.S.

Born as Satyakim Yashpal, she was a former model who debuted with the thriller Phir Wahi Raat (1980) opposite Rajesh Khanna, which was directed by actor Danny Denzongpa. Though the film did not fare well, filmmakers noticed Kim. She gave an eye-catching performance in Manmohan Desai’s Naseeb (1982) opposite Rishi Kapoor.

Kim, who resembled Dimple Kapadia faintly, was also seen in Humse Hai Zamana (1983) and Maha Shaktiman (1985), both opposite Danny, Andhar Bahaar (1984), Sardar (1984), Commando and Gharwali Baharwali in the year 1988. She was last seen in the film Main Balwaan in a song as a cameo after which she completely faded away. There were some reports of a link-up with actor Aditya Pancholi in a tabloid but nothing was confirmed. 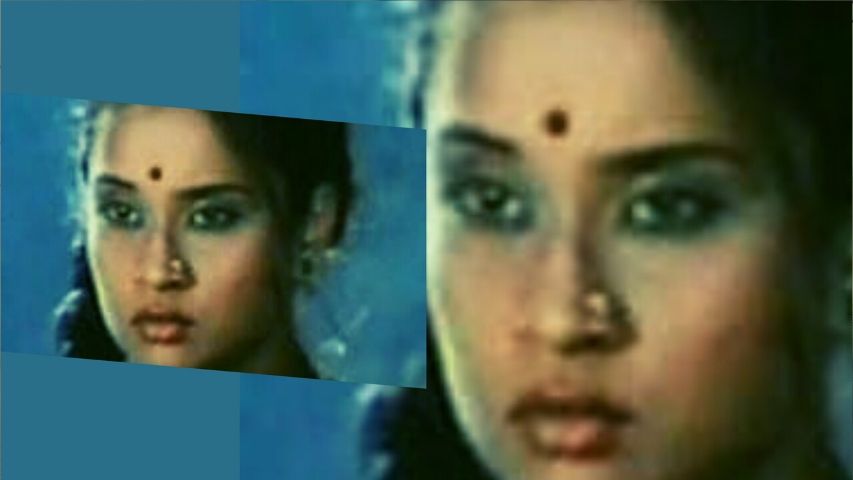 Full of spunk and joie de vivre, Kiran Vairale became a known face in the 1990s with her brief appearances in Ek Baar Kaho, Naram Garam, Saath-Saath, Prem Rog,  Jeena Yahaan, Arth and Namkeen all in 1982. She also essayed parts in Shubh Kaamna and Ek Jaan Hai Hum (1983) where the roles she played had shades of grey. She was mainly seen in supporting roles where she made her presence felt and soon became a known face among audiences. Then suddenly, she left it all and got married to Fahd - the son of Tej, who is actor Dilip Kumar’s sister and settled permanently in the U.S. 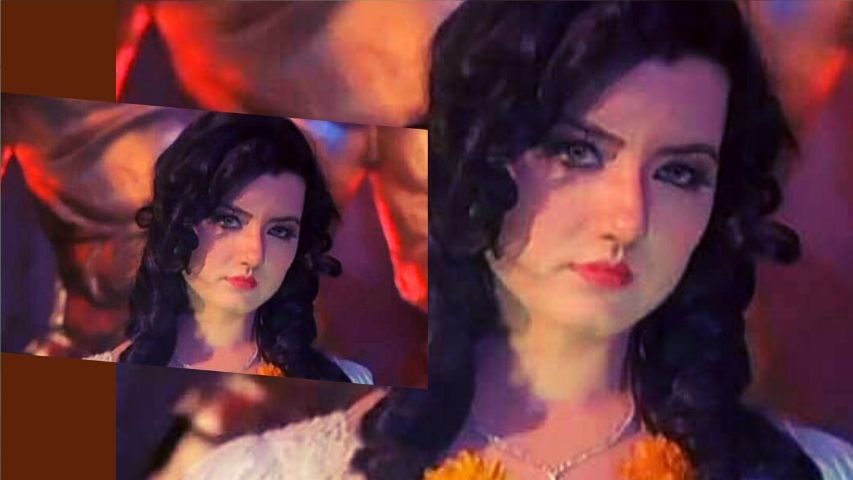 She began her career with N.D. Kothari’s Sarkari Mehmaan (1979) opposite the dashing Vinod Khanna. The film performed averagely after which she was seen in Divorce (1984) top-lining Vijayendra, Sharmila Tagore and Suresh Oberoi. After a lull, she appeared in the Ramsays’ Veerana (1988), which clicked big-time. She was to act in another Ramsay production but it was reported that she received incessant calls from the underworld. She cancelled all shoots to lead a life of anonymity in the U.S. 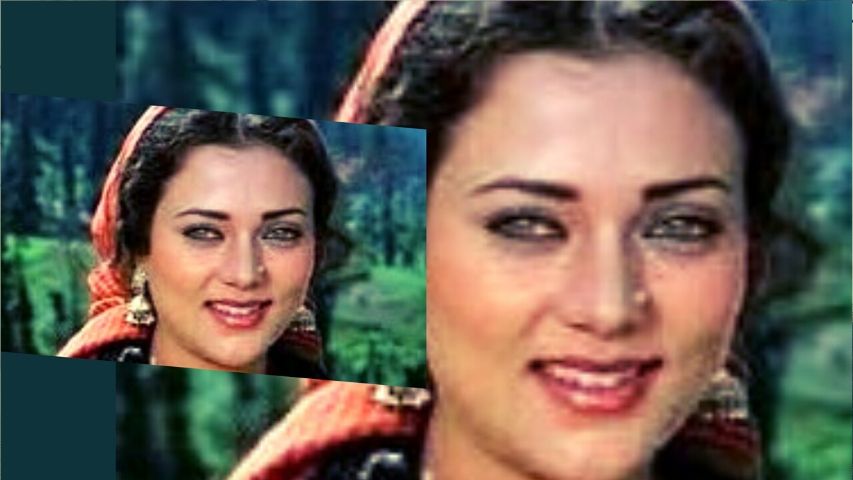 Born Yasmeen Joseph, she was renamed Mandakini by director Raj Kapoor for his magnum opus Ram Teri Ganga Maili (1985). She was the chosen one after the banner had auditioned numerous girls and also some of the top heroines of that era.

Mandakini created quite a stir in the film due to her innocent face, deep blue eyes, and body exposure. She went on to do a number of films with all the top heroes but could not repeat the success of her first film. Some of her noteworthy films include Jeeva and Jaal, Loha, Dance Dance, Jeete Hai Shaan Se, Tezaab (1988), Ladaai (1989) and Pyar Ke Naam Qurbaan (1990). She was last seen in Zordaar (1996) opposite Govinda.

She was often spotted in the U.A.E. Back home she cut a music album called No Vacancy, which didn’t spark much public interest. There were roomers about a linkup with a known underworld celebrity but again there was no conformation about it. She is married to Dr. Kagyur Rinpoche Thakur (whose childhood photographs were used in the famous Murphy ad) and they have a son, Angad. She is active on social media.