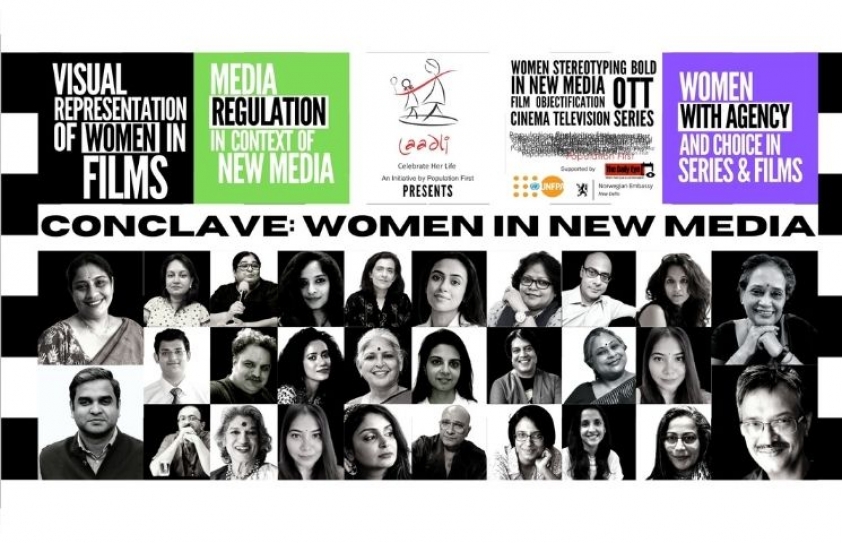 The first ever Media Conclave on Clubhouse was hosted by Population First, and its flagship program Laadli, reports Mrinmayee Ranade

UNFPA and the Royal Norwegian Embassy in India supported the event. The Daily Eye was a partner and it was held on 29th August 2021 from 10 AM to 8 PM.

The theme of the conclave was ‘Women in New Media’ and five sessions of two hours each were held in the three clubrooms, Candid Conversations, #NoRapeIndia and The Daily Eye, with around thirty powerful speakers participating as panelists. 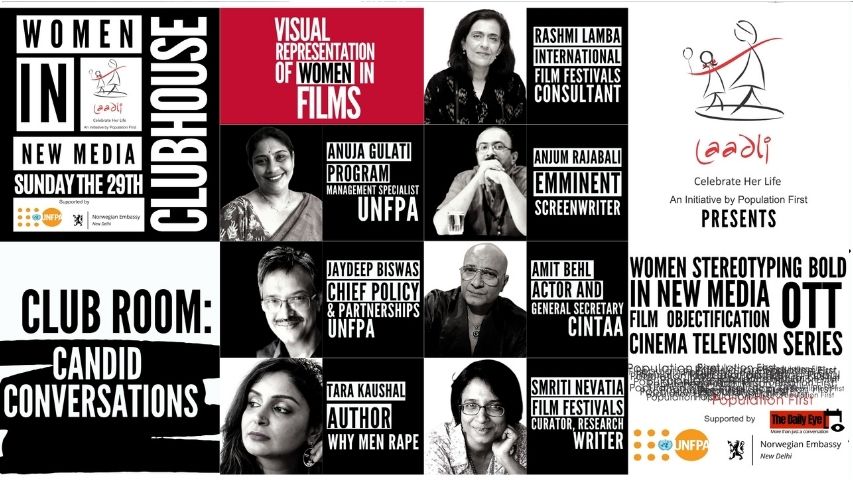 Anjum Rajabali talked about his early days in films, when the producers would want a rape scene in the film because it was a kind of a crowd puller. He recalled seeing people cheering the rape scenes in small theatres. Smriti Nevatia spoke of Satyajit Ray's films, which were women centric - Charulata and Mahanagar were some among those she talked about. Dr. Sharada spoke of films like Tumhari Sulu and English Vinglish, which have done well at the box-office and asked the panelists why more films led by women protagonists who asserted themselves were not being made.

It was observed that usually a woman is seen through a man’s gaze. Scenes of rape are shot more to titillate, rather than to portray the agony and pain of the woman. Anuja gave the audience perspective to the discussions and said that urban as well as rural Indian women were not happy to be misrepresented, as the young Indian women of today are aware as well as assertive. It was agreed by the panelists that things are changing gradually because of pressures upon filmmakers by social media response and also because OTT platforms are now providing the space for diverse narratives.

The second session was in collaboration with #NoRapIndia. The conversation was around ‘Sexual Violence and Abuse in Series and Films’. It had Tathagata Chowdhury, Theatrecian, Kanak Gupta, Educator, Ashima Avasthi, Zee Studios Head Original Series and Films, Shreya Narayan, Actor and Model, and Prerna Wanvari, Actor and Model as the panelists. 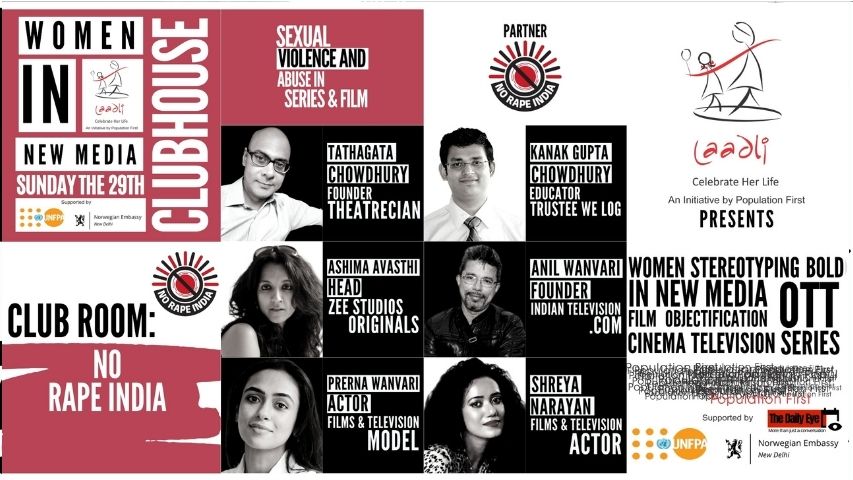 Kanak Gupta talked about the importance of such conversations and said that they should be organized regularly and Tathagata Chowdhury elaborated on the depths of storytelling across theatre and film around the world, which is missing in mainstream and popular Indian cinema and television. He said that it is time that genders are represented realistically as the audience evolves. Ashima Awasthi informed the panel and audiences that studios today were conscious of the impact that storytelling has upon viewers and that young generations of storytellers are reluctant to compromise on their storytelling for commercial purposes only and thereby bringing a paradigm shift in the way that commerce will work in the future. 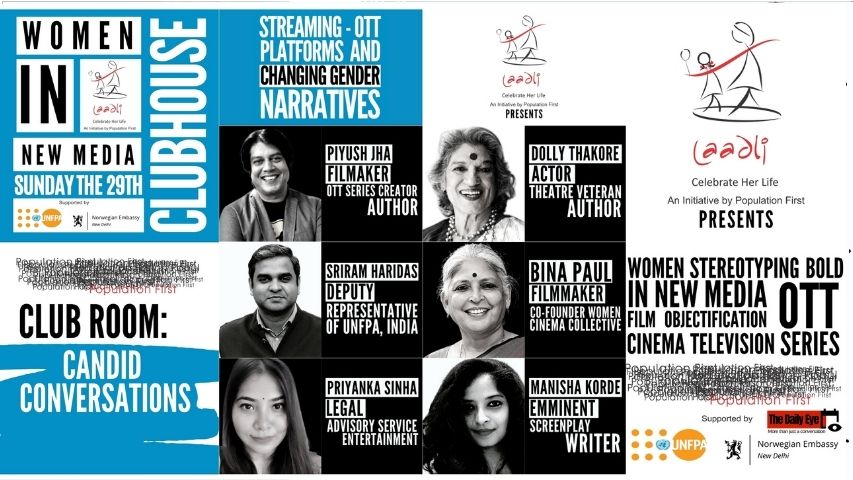 The discussions in this room revolved around how creative communities were becoming conscious of the way they were portraying women and also other genders. Sriram stated that his mother was an avid viewer of mainstream soap operas and could not be convinced to avoid watching them even though they’re regressive. But he added that her interest was in the drama more than the content because it wasn’t as if in earlier days when Indian television had great progressive storytelling, she was any less engrossed. The point made was pertinent to the fact that good storytelling has as much value as formulaic content. Priyanka Sinha spoke about the need content creators feel today to be on the right side of the law when telling stories and their reliance on research to be factual and accurate. Bina Paul was impressive in her take about why women filmmakers, actors and technicians need to be more united so that they can be represented correctly.

The topic for the fourth session was ‘Women with agency and choice in enentertainment’. Vinta Nanda, Filmmaker, Writer and Editor of The Daily Eye moderated the session and the participants were Gajra Kottary, Author and Screenwriter, Nilakshi Sengupta, Documentary and Ad Filmmaker, Mona Ambegaonkar, Actor and Theatre Veteran, Manisha Korde, and Dr. AL Sharada. 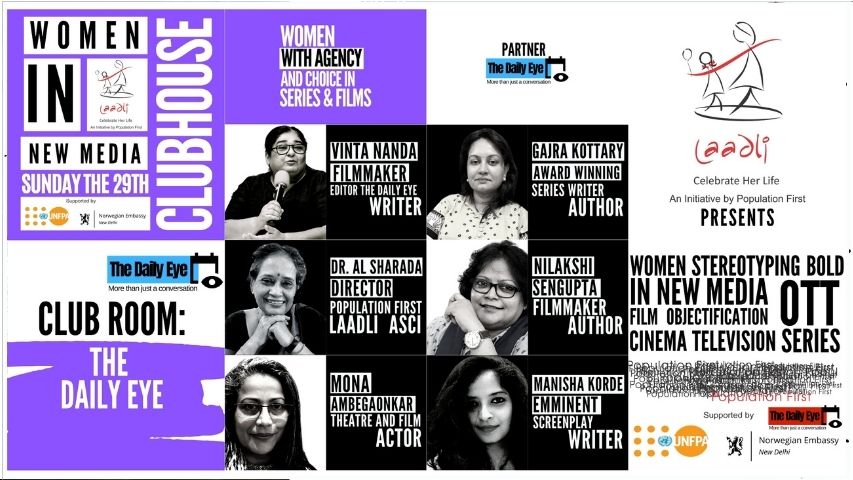 Some of the strong women characters in TV serials were primarily talked about; Dadisa in Balika Vadhu was one among them. Manisha Korde said that the project with a strong woman wasn’t saleable just because it had a strong woman - it had to have good storytelling that would bring the ratings. Mona spoke of a Haryanvi character she played who was a criminal and about why she insisted that the writers provide a back-story to her character so that she could justify her performance. Dr. Sharada elaborated on the need for women characters to be more real than just involved in kitchen politics and suggested that depth should be brought to the writing, especially in these times when audiences, particularly women, are struggling to find agency and confidence. Nilakshi talked about how she managed to get her way despite the hurdles encountered by all women in a largely male-led industry. Gajra was moved by Mona and Manisha’s words and said that while writing in the future, she is going to be much more conscious, than she already is, about sisterhood among women characters and the place that they deserve.

The topic of the last session was catchy. ‘To do or not to do: Media Regulation & New Media’. The session was moderated by: Dr. AL Sharada, and had Rekha Rao Gulrays, PR Consultant and Co-founder Katha Kathan, Aazmeen Kasad, Advocate and Member ASCI, Pradyuman Maheshwari, Senior Journalist and Commentator, Kalpana Yadav, Gender and Human Rights Analyst, UNFPA and Vinta Nanda as the panelists. 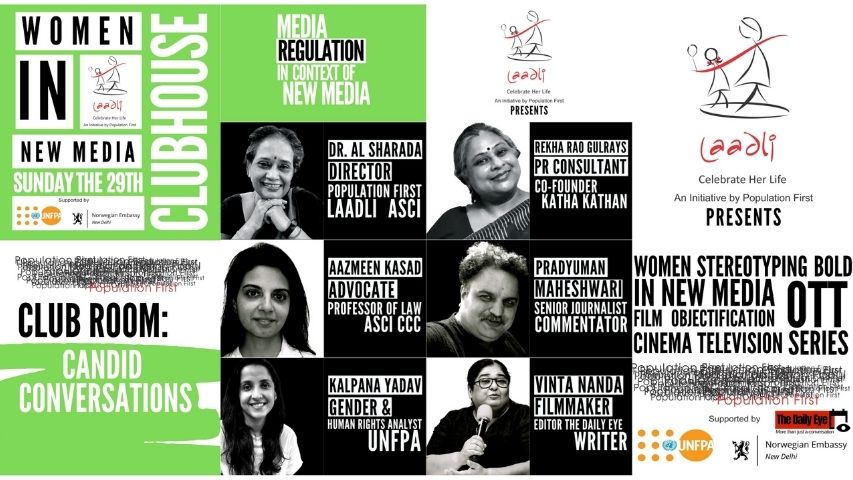 The consensus was that self-regulation was necessary, especially for OTT content. Dr. Sharada pointed out that OTT content was consumed on a personal level and it is not a family event like television viewing is, therefore it could afford to push the boundaries. Kalpana Yadav gave the discussion a human rights perspective and spoke at length about the fact that there were many communities that were missing from storytelling across OTT platforms, Television and Films. Pradyuman Maheshwari explained how self-regulation has been established effectively in advertising. Aazmeen briefed the audiences about the various laws in existence to guide the creative content developers. The latest law, though, initiated by the government, she said, has a 3-tier grievance response mechanism rooted in self-regulation by social media and OTT platforms. Clearly defined guidelines are important for effective self-regulation, said Rekha Gulrays.

Dr. Sharada ended the daylong conclave by thanking all the participants and leaving the discussion on a positive note. She insisted that however difficult it be for women to find representation and voice in the industries of media and entertainment, we must have the conversation going and continue to fight.