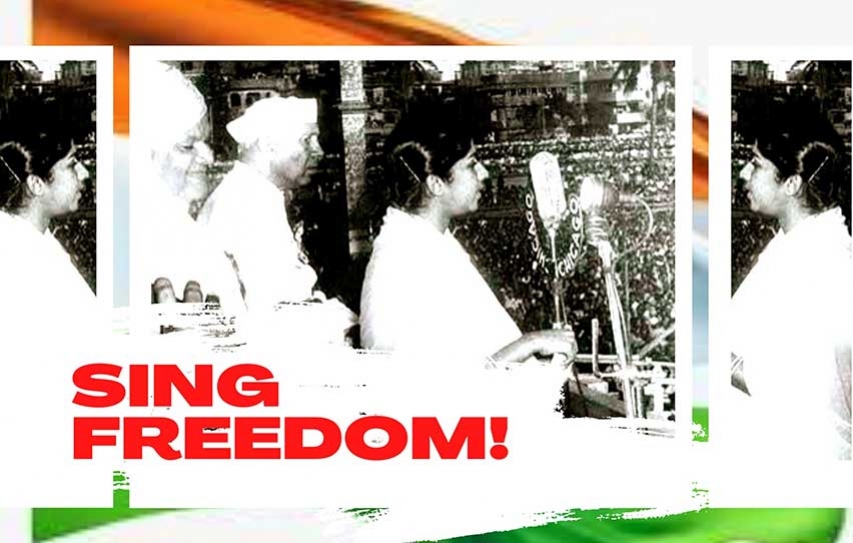 Patriotic songs are de rigueur for occasions such as Independence Day. These songs are wonderful compositions in their own right apart from their role in instilling a sense of national pride, with their adrenaline pumping lyrics and rhythms.

One of the earliest patriotic songs can be found in the Ashok Kumar starrer Janmabhoomi (1936), with the lyrics Jai Jai Janani Janmabhoomi, written by J.S.Kashyap. Saraswati Devi, a Parsi lady whose real name was Khorshed Minocher-Homji, composed the music. She had to hide her origins under a ‘nom de plume’ due to the social mores of that era, which frowned upon women participating in the film industry.

Saraswati Devi was a prolific music director in the 1930s and composed for a number of hit movies in that era. She gave us that lovely song in the 1940 movie Bandhan, titled Chal Chal Re Naujawan, sung and enacted by Ashok Kumar. The lyrics were by Kavi Pradeep who is most famous for the song Aye Mere Watan Ke Logon.

Pradeep wrote the lyrics for the Ashok Kumar starrer Kismet (1943), a super-hit, which ran for several years. Anil Biswas composed the music and both of them faced a lot of flak for their provocative song, Door Hato Aye Duniya Walo Hindustan Hamara Hai.

The song was likely to be censored by the British as World War II was raging but the filmmakers managed to convince the censors that the target of the song was the Axis force thanks to the line Tum Na Kisi Ke Aage Jhukna, German Ho Ya Japani. The real import of the lyrics however wasn’t lost on anyone and the population was fired by the zeal of overthrowing the colonial yoke with independence around the corner.

The pre-independence era was remarkable for songs about communal harmony. The one, which comes to mind immediately in this context is Naushad’s Hindustan Ke Hum Hai, Hindustan Hamara, Hindu Muslim Dono Ki Aankhon Ka Tara, for the 1944 release Pehle Aap. 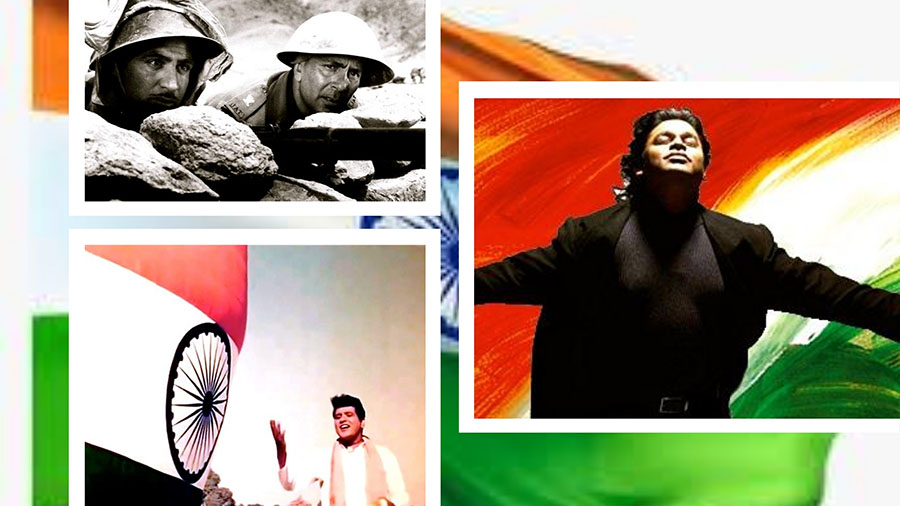 The song is one of Rafi’s earliest if not the first solo under Naushad’s baton. Soon after Independence, in 1948 came the Dilip Kumar starrer Shaheed, with music by Ghulam Haider - the Rafi and Khan Mastana song, Watan Ki Raah Mein Watan Ke Naujwawan Shaheed Ho. Ghulam Haider left for Pakistan soon after that and passed away in the early 1950s after composing for a few Pakistani movies.

Post-Independence, India’s constituent assembly adopted Bankim Chandra Chatterjee’s Vande Mataram, as the national song. Perhaps the best musical interpretation of this song was in the 1952 release Anandmath, with music by Hemant Kumar. Rendered as a duet by Lata and Hemant Kumar, it was enacted on screen by Geeta Bali and Pradeep Kumar. Hemant Kumar also gave us the other memorable number from the 1950s, written and sung by Kavi Pradeep – Aao Bachon Tumhe Dikhyae Jhanki Hindustan Ki. One of the most popular patriotic songs was Saare Jahan Se Accha, written by Mohammed Iqbal several years before Independence. The 1972 Dev Anand starrer Yeh Gulistan Hamara, used the song as its title theme.

The trauma of the 1962 war with China inspired Chetan Anand to take this camera to the rugged mountains of Leh-Ladakh for the war drama Haqeeqat. The music by Madan Mohan is worth listening to on loop to this day. Rafi’s Kar Chale Hum Fida, remains the signature patriotic song played on TV to this day. No less evocative is the impact of the war on soldiers and their families, articulated through three other songs  – Rafi’s Main Yeh Sochkar Uske Dar Se Utha Tha, Lata’s Aaye Ab Ki Saal Diwali, and the Rafi, Talat, Manna and Bhupendra song Hoke Majboor Use. The lyrics by Kaifi Azmi are pure gold.

The China war also gave us the other permanent fixture on the list of stirring patriotic songs – the C.Ramchandra composition Aye Mere Watan Ke Logon. Kavi Pradeep wrote several stanzas for the song of which only a few went into the final version. Lata’s vocals, C.Ramchandra’s music and the moving lyrics make this song stand out like no other. The song was performed live in Delhi as part of a fund-raiser just after the China war and is reported to have brought Pandit Nehru to tears. 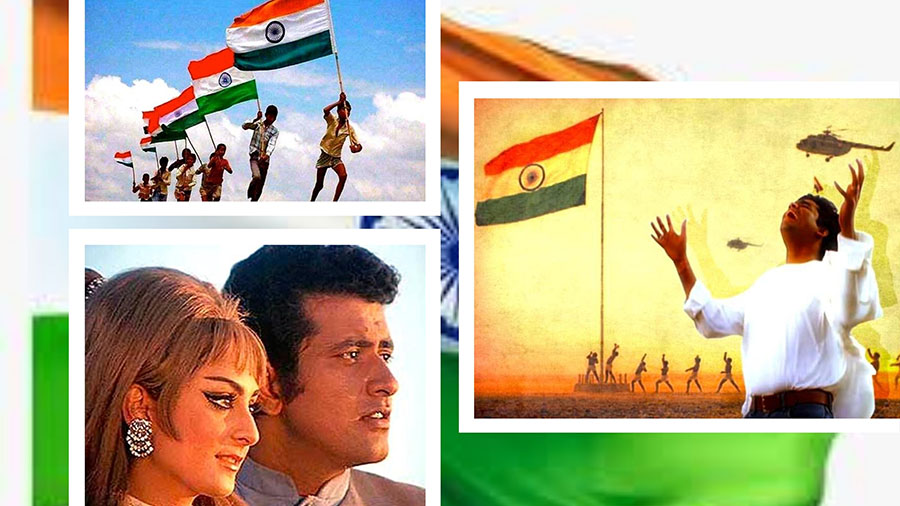 An article on patriotic songs would be incomplete without mentioning Manoj Kumar. His Upkar song Mere Desh Ki Dharti, is well known. The story goes that Manoj Kumar was inspired to make Upkar (1967) after his meeting with Lal Bahadur Shastri, especially his Jai Jawan Jai Kisan slogan. The musical duo Kalyanji-Anandji also scored the music for Purab Aur Paschim (1970), which consolidated the image of Manoj Kumar as the patriotic Bharat.

Less popular though of equally high quality are the songs Manoj Kumar enacted in Shaheed (1965). The movie was based on the martyrdom of Bhagat Singh, Sukhdev and Rajguru. The music and lyrics were both by Prem Dhawan. The lyrics Sarfaroshi Ki Tamanna, still brings a tear to one’s eyes when we think of the bravery of these youth who gave up their lives for our independence. The movie has a number of other patriotic songs by Mohammed Rafi, Mahendra Kapoor and Manna Dey. Manoj Kumar continued to make successful patriotic-themed movies right up to Kranti (1981).

The recent years have seen only a handful of popular patriotic compositions, most recently by A.R.Rahman with Maa Tujhe Salaam.

The gold standard however remains the songs composed before 1947 and a couple of decades after independence as our fledgling democracy found its feet and its confidence forged in the trauma of partition and the nation-defining wars of 1962, ‘65 and ‘71.

As we stand up for the national anthem on August 15, perhaps we should also recall the Hansraj Behl composed song Jahan Daal Daal Par Sone Ki Chidiya Karti Hai Basera, Woh Bharat Desh Hai Mera, as an impetus to raise our nation back to its past glory.