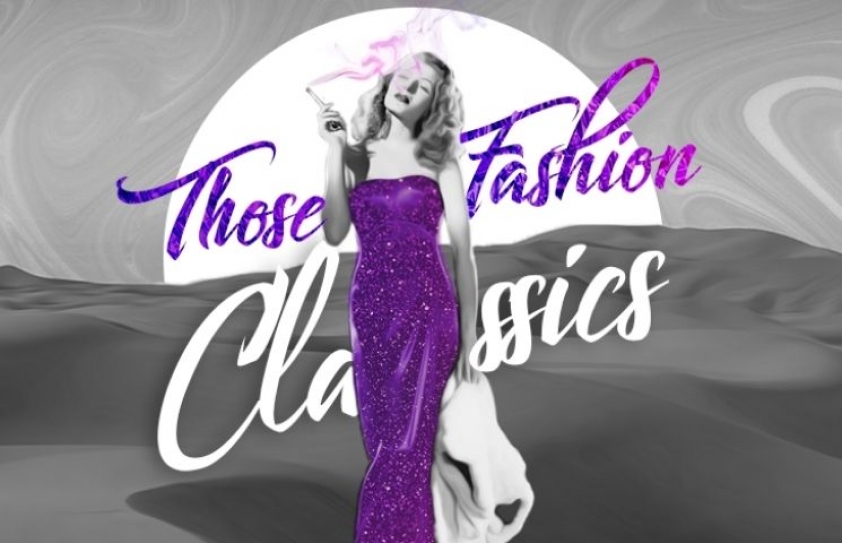 Khalid Mohamed sizes up Hollywood’s retro-chic, which continues to be the stuff that timeless fashion statements are made of.

Incredible but true, it’s the movies, which have taught so many, the urbanites essentially, of us how to kiss, how to fall in love, and, as significantly, how to dress. Or should I say, how to throw attitude and style, or at least try to? Right from our grandparents and parents, we have been infatuated hopelessly by the glamor, the trends and tricks of charisma-oozing screen stars in the quest to make our lives and our wardrobes cool.

Of course, such an infatuation isn’t the right thing to do. After all, it makes more sense to wear what suits you and what goes within a specific milieu. A minister, for instance, was criticized for donning a ‘western’ pair of trousers, shirt and tie instead of opting for kurtas-pajamas or dhotis. Correct, now that’s a point of view, which has its own unilateral logic.

Yet, look around you. A mode of dress is an individual choice. Bespoke or pret-a-porter, global or desi, fashion is what you make of it. And the movies, magazines and those sashays down the red carpet at mega-events set trends and styles willy-nilly.

Bollywood designers, frequently, bank on GQ, Vogue and Vanity Fair for ‘inspiration’ of the current Hollywood celebrities, indigenizing them with embroidery, accessories and silhouettes. Or they shop off Los Angeles’ Rodeo Drive, London’s high-end stores and if the budget doesn’t permit such expenditure, it’s Bangkok or Singapore for affordable replicas.

The current high priests of Bollywood glitzy fashion are, of course, Abu Jani-Sandeep Khosla, Sabyasachi Mukherjee and Manish Malhotra. And we seem to be stuck in a groove there. Although fashion shows and weeks have multiplied like rabbits, they are the most-wanted, be it for films or for wedding extravaganzas.

Be that as it may, since time immemorial Bollywood has been influenced pervasively by Hollywood couture. To date, you will find our show town’s top stars aspiring to be indigenous versions of Leonardo Di Caprio, Johnny Depp, Brad Pitt, Angelina Jolie, Kim Kardashian (Priyanka Chopra submitted herself to Kardashian’s stylist, go a welter of reports), and Nicole Kidman, to name but a few.

I’m not defending the copycat wave, far from it. The point is that it’s there and it’s always been there. Especially so, when it comes to the classic look, the ultimate in retro-chic, there’s nothing comparable to the golden oldies. Truly the Hollywood process of alloying star personalities to studio-designed publicity campaigns, cleverly alloying publicity photo-sessions and their screen roles to advance timeless fashion statements, have set the template as it were. In shaded black-and-white as well as shimmering color.

Here’s cutting, then, to the perilous task ahead of picking my 10 all-time selection of H-town icons, women and men, whose images bespoke for themselves: 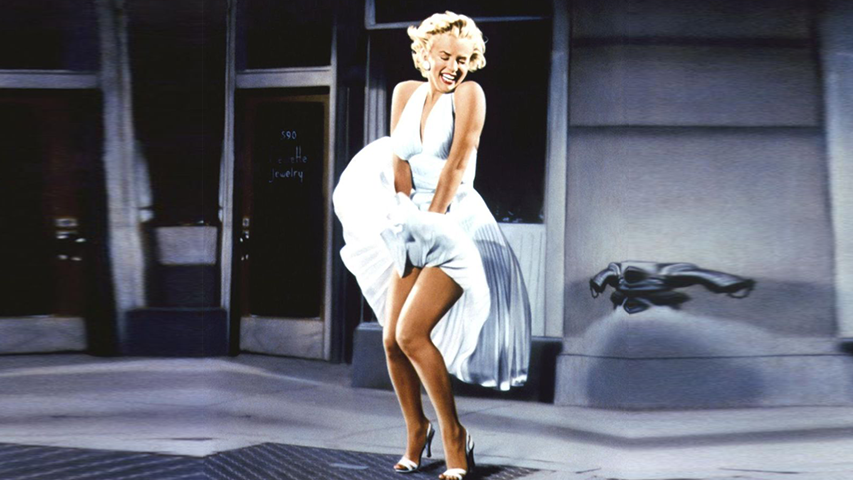 That billowing skirt over the whooshing subway in Seven Year Itch, a pop-art portrait created in her memory by Andy Warhol and itsy-bitsy swimwear are just some of the images, which breathe her back to life. Until Marilyn Monroe, sex symbols looked as if every curl and pout had been arranged in accordance to the cameraman’s instructions. Monroe founded the slept-in tousled-hair look, and her clothes struggled to contain her. Inevitably since she couldn’t always get away from her take-me-or-leave-me seductive allure, and suffered from bouts of depression.

There was that unforgettable flying skirt scene from the romedy The Seven Year Itch. Although she loved filming the scene, her husband at the time, Joe DiMaggio, was outraged. In fact, that scene led to her divorce from the famous baseball player.

Constantly, swishy gowns were designed for La Monroe. Lore has it that she was literally sewn into a Jean Louis silk soufflé ensemble when she was invited to the White House to croon Happy birthday to President John F Kennedy (that they had a tempestuous affair has been chronicled time and again). A bargain basement bathrobe she could carry off with equal panache and if she wore dark glasses to premieres, so what? Monroe was made for fashion. Or was it the other way around? The blonde wonder committed suicide at the age of 36 in 1962, depriving the world of so many immortal designs to come. 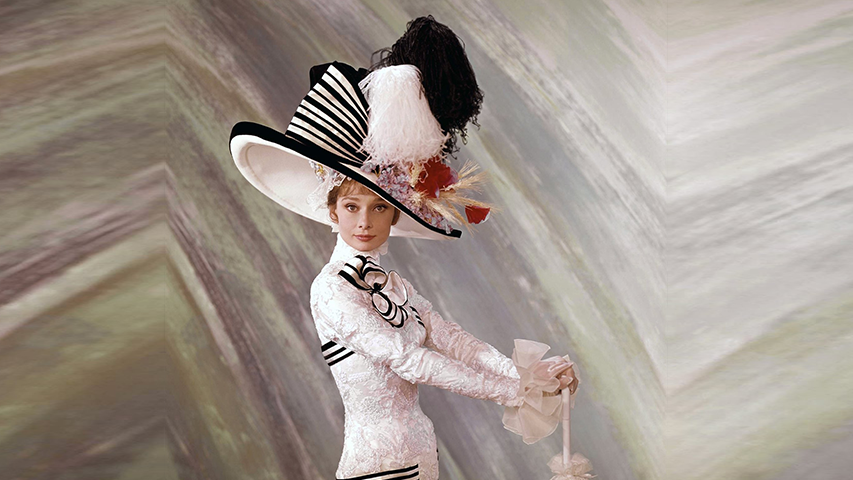 Think Audrey Hepburn and you think of Holly Golightly, the bohemian heroine of Breakfast at Tiffany’s, with the majestically bejeweled bouffant and a cigarette holder, which complements her face to swoon-for. “Everything about her is impeccable,” Hubert de Givenchy once said of his most famous client. And Hepburn’s credo was, “look for simplicity of line… and buy quality rather than quantity.”

The Givenchy-Hepburn partnership was inspired, avoiding the ‘costumey’ and the fussy, especially when she played the chauffeur’s daughter in Sabrina, the wallflower who blooms a la mode Parisian in Funny Face, not to forget the Eliza Doolittle who discards her rags in My Fair Lady to go the races in an over-the-top gown befitting of a duchess. Sigh. 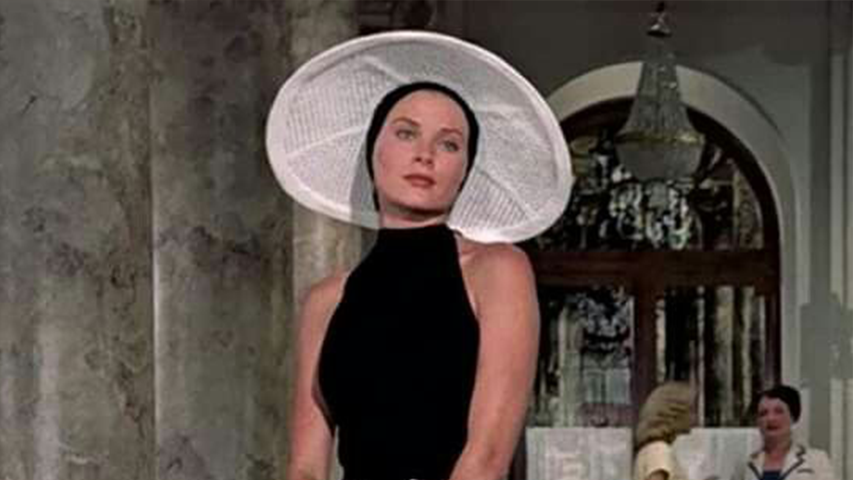 The soon-to-be-princess of Monaco once dazzled with a two-strand pearl choker at New York’s royalty-studded ball. And at the Oscars, she had jaws dropping in an après-Dior gown created by the legendary Edith Head, dress designer at Paramount studio. But it was the rival MGM studio, which on the event of her wedding thoughtfully gifted her costumes created by Helen Rose worn in the film High Society.

Grace Kelly’s USP was to make an entrance chin out, back straight, scattering poise as effortlessly as she did elegance on the screen, particularly in Alfred Hitchcock’s French Riviera-located mystery To Catch a Thief. Glacial always, she could still turn on the heat, thanks to her wardrobe, which was feminine to the core. Plus in swimsuits, she could send out the signal, “Come hither dudes but keep your distance.” 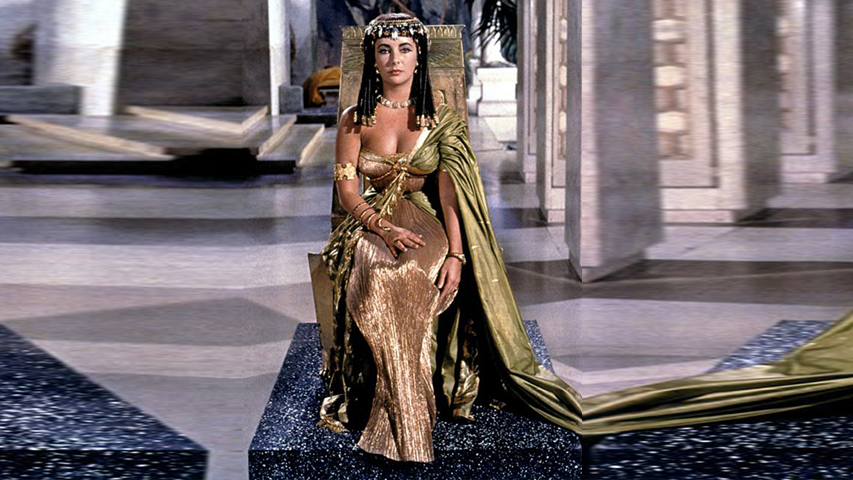 The homely child prodigy of National Velvet started out as the spirited-girl-next door moving on to flash her violet eyes in Ivanhoe and next to exude steam as the scantily garbed Cat on a Hot Tin Roof. More: she sported mountainous, gold headgear for Cleopatra but eventually asserted that diamonds are a woman’s best friends. A serial bride, Hollywood’s queen possessed a jewelry collection, which began with her husband No. 3, the flamboyant film producer Mike Todd, who gave Elizabeth Taylor a gift every day of their marriage.

This included a dazzling ruby suite of earrings and necklace. But it was husband No 5, Richard Burton (and no 6, they divorced and remarried), who gave her the legendary Krupp diamond embedded on a platinum Cartier mount. For special occasions, she would add on the La Peregrina necklace of pearls once owned by Mary Tudor. Princess Margaret had tried on her Krupp Ring at an event and snapped, “How vulgar,” to which Liz Taylor shot right back, “Yeah. Ain’t that great?” 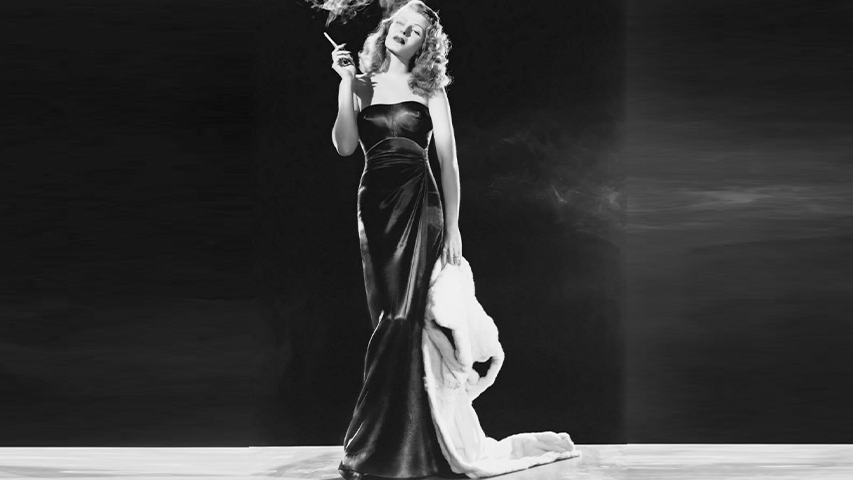 Jean Louis, known to sparkle opulence on costumes, designed her satin bustier dress in Gilda. In everyday life, though, Rita disappointed the paparazzi since she was habituated to comfortable shoes and high-waist slacks whenever they were in sight. 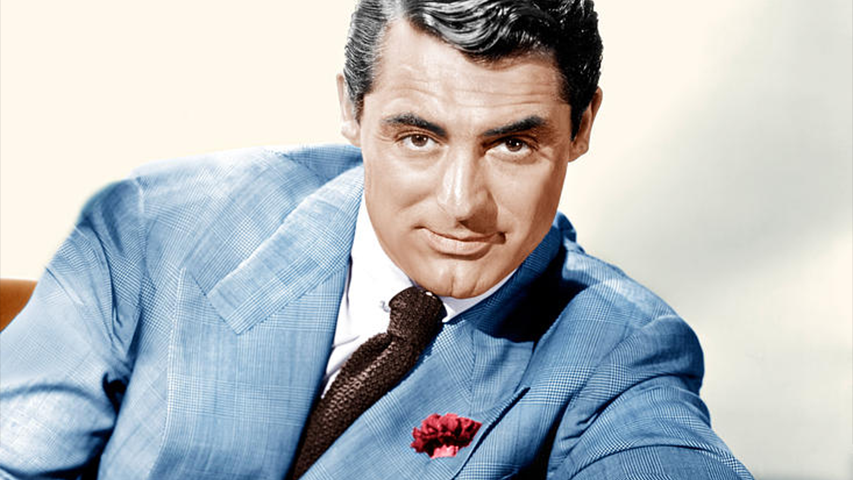 Perfectly groomed, his coiffed hair had a deep parting. And at 6 feet 2 inches, the tall, dark and handsome Cary Grant walked tall through screwball comedies and romantic rhapsodies. Never a wrinkle on his face, he was scrubbed, suave and a master at conveying sophistication. Grant’s suits continue to be a talking point among fashionistas.

At the outset, he was partial to the loose fitting ‘sack suit’ but gradually switched to the slim, lapelled suit, which became his signature. In the ‘suit’ department, Gene Kelly could be rated as his closest competitor. Kelly made the single-breasted suit en vogue and it’s said that his travelling kit would merely comprise a black suit, three white dress shirts, a long woven black tie, a black bow tie, black socks and black shoes. Cary Grant also travelled light. Although his suits were custom-made, he would maintain, “My father used to say, let them see you and not the suit.” 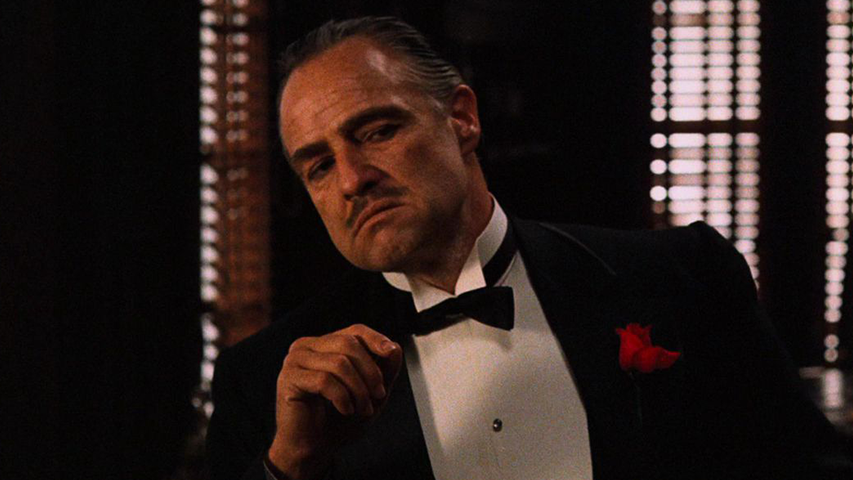 One of the world’s most accomplished actors, Marlon Brando was a game-changer. More of an actor than a clotheshorse, inadvertently a grubby vest, which accentuated his arm muscles in A Streetcar Named Desire, indicated that it’s okay to be as real as it gets. In addition, Brando initiated the leather-jacket biker look with The Wild One, inspiring actors like James Dean, of crumpled trousers, jeans and hat, to dress in sync with their roles at the cost of expending with glamor. Circa 1972, in his Oscar-winning avatar of The Godfather, Brando emblemized the Italian mafia look, which has remained unaltered to date.

The King Of Cool 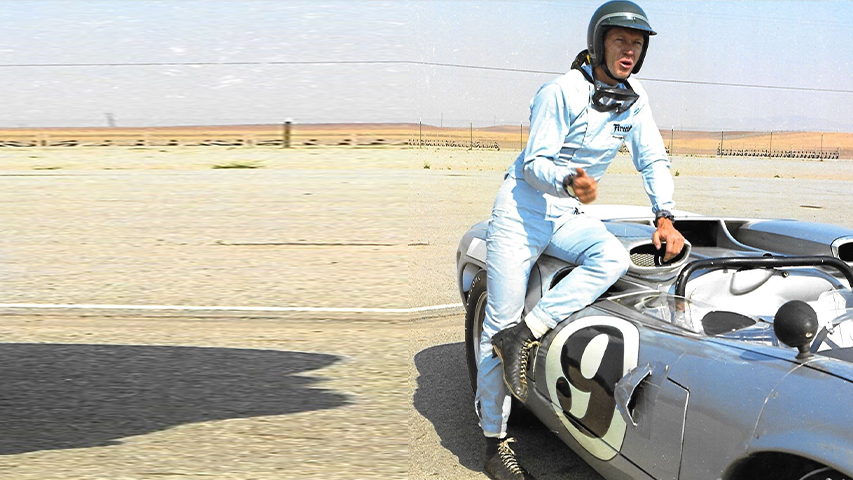 A fanatic for fast cars, Steve McQueen once stated, “I’m not sure whether I’m an actor who races or a racer who acts.” Casual chic was his calling card, whether he portrayed a gazillionaire, a cop, or a race contestant in Le Mans.

McQueen could even outclass James Bond’s accessories without getting gimmicky - in The Thomas Crown Affair, his foldable Persol sunglasses becoming an instant trendsetter. Ditto the Rolex and Tag Heuer wristwatches he sported before the era of brand placements in the movies. Given to shawl collar cardigans worn in Bullitt, the low-key actor could also get away with white crew neck shirts, tweed jackets and brown suede boots, investing them with a touch of class. 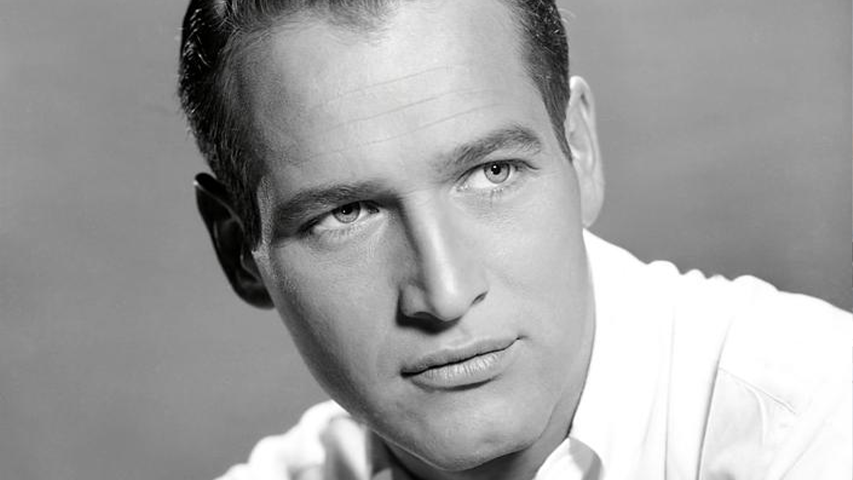 To hypnotize the audience, Paul Newman of the ocean-blue eyes, didn’t need more than a white dress-shirt tucked tidily into a black pair of trousers. The urbane cowboy of Butch Cassidy and the Sundance Kid, however, permitted himself to be styled painstakingly for that film.

His brown jacket over a grey-blue shirt, aged trousers and a prominent buckled belt topped by a weather-beaten hat were color-coordinated with the outfits of his co-star Robert Redford. Difficult to determine which of the duo was the more delectable eye candy. 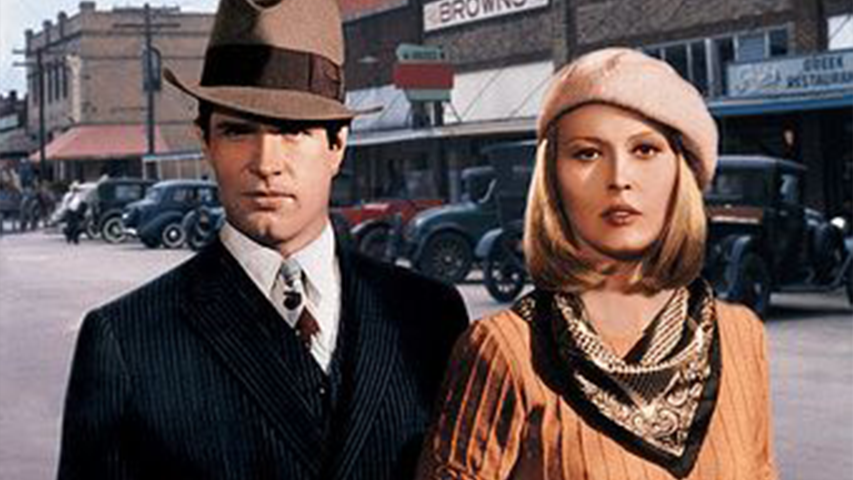 Dubbed as an incorrigible Casanova who ended up breaking the hearts of his leading ladies, Warren Beatty has been undervalued as a style icon. However his skinny tie and khaki chinos, and an array of scarves, continue to be identified with the supremely camera-friendly actor.

Plus, of course Beatty’s brand of gangsta chic, complete with waistcoat and hat, was widely retailed when Bonnie and Clyde asserted that gangsters could be fashion savvy. As the beret-wearing Bonnie, Clyde’s accomplice in crime, Faye Dunaway too entered the Hall of Fashion Fame.