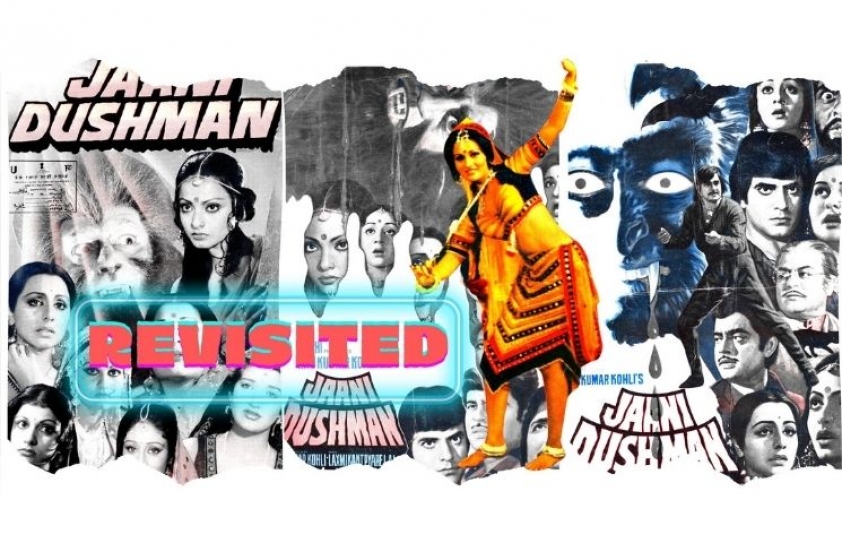 Film historian Dhruv Somani revisits Jaani Dushman the 1979 multi-starrer blockbuster of Raj Kumar Kohli, which is a major draw even today in the rural sector, the streaming channels and YouTube.

Critics’ nightmare and the masses’ darling, however, he was never quite placed in the league of Manmohan Desai or Prakash Mehra. Yet he did give his peers a run for their money when it came assembling an ensemble star cast. Indeed, here’s my all-time favourite director, the master of multi-starrers Raj Kumar Kohli.

Raj Kumar Kohli kick-started his career with small-budget films like Aik Tha Alibaba (1963) starring his wife, Nishi, and Dara Singh; he hit the jackpot over a decade later with his star-studded revenge saga Naagin (1976). Its stupendous success was followed by Jaani Dushman (1979), which had double the number of stars of Naagin. 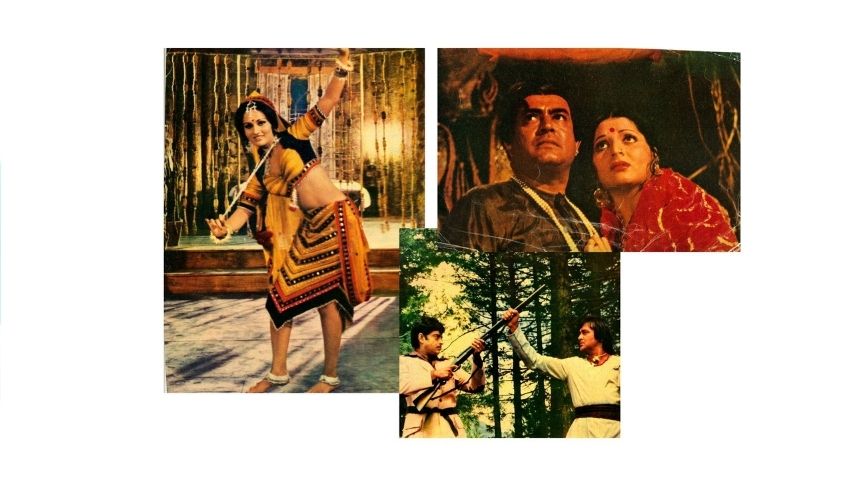 The genre of Jaani Dushman was more of folklore with doses of horror, suspense and action. It attracted the audiences, as there was a curiosity to see big star names in the domain of horror, till then mostly associated with the Ramsay Brothers. Most top heroes stars avoided horror those days then as they felt it would go against their image of action heroes.

Compared to today’s technical standards, the film does look outdated but keeping the era of the late 1970s in mind, it could boast of decent special effects by B. Gupta who sent a shiver down the spine among the viewers. The costumes by Bhanu Athaiya fashioned with mirrored cholis in traditional bandhej and Rajasthani block prints for the heroines. For the heroes, she used solid earthy tones, deep-necked embroidered tops with minimally matching lower-halves with boots. 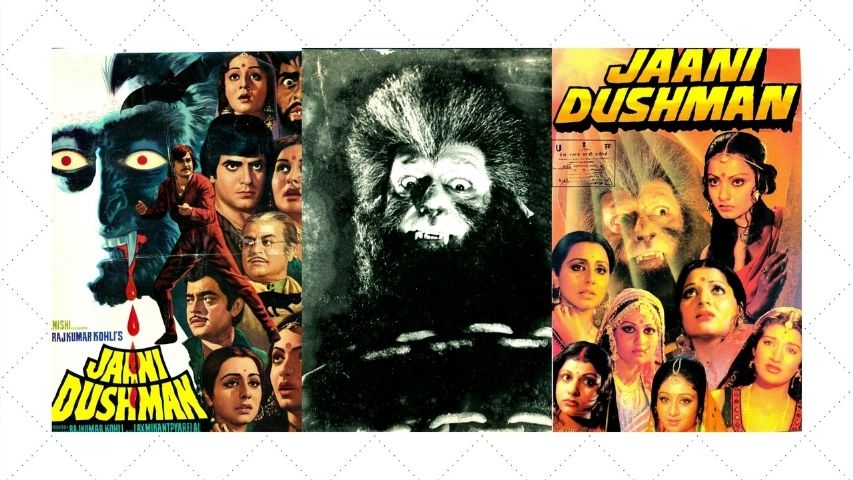 The subject of Jaani Dushman revolved around a werewolf. The story is set in a scenic village where newly wedded brides in traditional red attires would disappear from their palanquins on reaching the village temple for blessings. These chilling mishaps were shown to occur unabated for years in spite of the presence of law enforcing agencies investigating the disappearances.

The script presented the wealthy Thakur Jwala Prasad who’s poisoned on his wedding night, since his wife loves a poverty-stricken man. Consequently, the Thakur’s soul goes on a killing spree to spite his vengeance against brides dressed in the traditional red outfits, as he perceives them as the manipulative one. The horror plot also invents multiple triangles, which keeps the story’s brisk tempo going.

While the brides continue to disappear from the village, the needle of suspicion points towards the villagers. The temple priest, the Thakur, who is venerated as a demi-god, a madman hovering around the village, and the suspicious and arrogant Shera, are all suitably ominous. Inevitably, the villagers continue to live in fear whenever a wedding is scheduled. 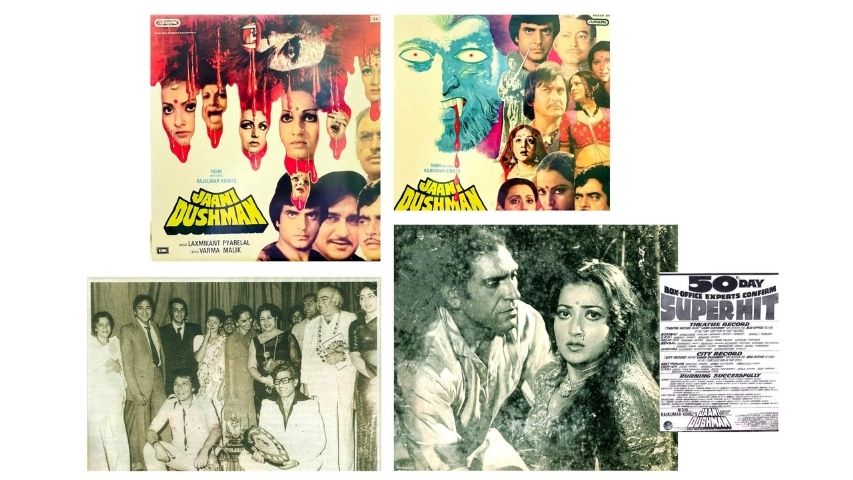 Apart from the star cast, Jaani Dushman clicked instantly because of its music score by Laxmikant-Pyarelal. The lyrics were by Veena Malik. Three of the songs Chalo Re Doli Uthao, Saare Rishte Naate and O Meri Jaan topped the Binaca Geet Mala. The other songs too became popular like Tere Haathon Mein Pehnake Chudiyan, Arre Sun Bhai Saadho, Aisi Waisi Na Samaj Sajna (with dialogue by Shatrughan Sinha in the middle of the antaras).

The vinyl albums of Jaani Dushman were released in a bright blue color (instead of regular black), which became a collector’s item. In fact, even today it fetches a high price if bought in the grey market.

The wedding song Chalo Re Doli Uthao sung by Mohammed Rafi acquired a cult status, regularly played at village weddings. In fact, the story goes that after seeing the film, villagers avoided red bridal clothes and preferred oranges and pinks at weddings. Such was the impact of the film in the rural belt. 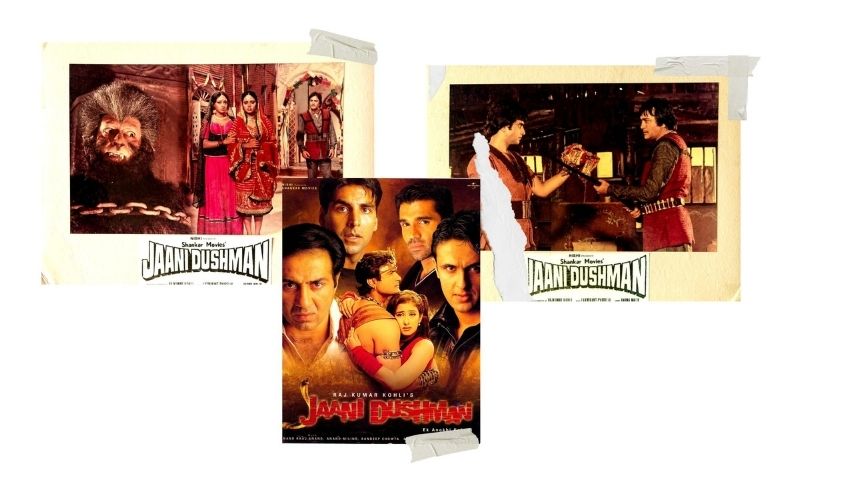 The film was released on 22nd May 1979. Reportedly, the censors, for promoting superstitious beliefs, banned it. Raj Kumar Kohli went into a legal battle and the film was sent to the revising committee – it was cleared with an ‘Adults Only’ certificate.

I was fortunate to discuss Jaani Dushman at length (one of my top favorite films) with director Rajkumar Kohli just before the release of my coffee table book, A Touch of Evil, in 2018 for which he wrote an informative and heartfelt foreword.

In our conversation, the producer-director revealed that during the script narration, Sanjeev Kumar was not keen to play the role of the Thakur as he had already gone grey for Sholay (1975). But suddenly, he got excited and changed his mind. Although he agreed to play the elderly Thakur, Sanjeev Kumar was much younger than Sunil Dutt and just a bit older than Shatrughan Sinha in real life. This was the only time the director and actor worked together. 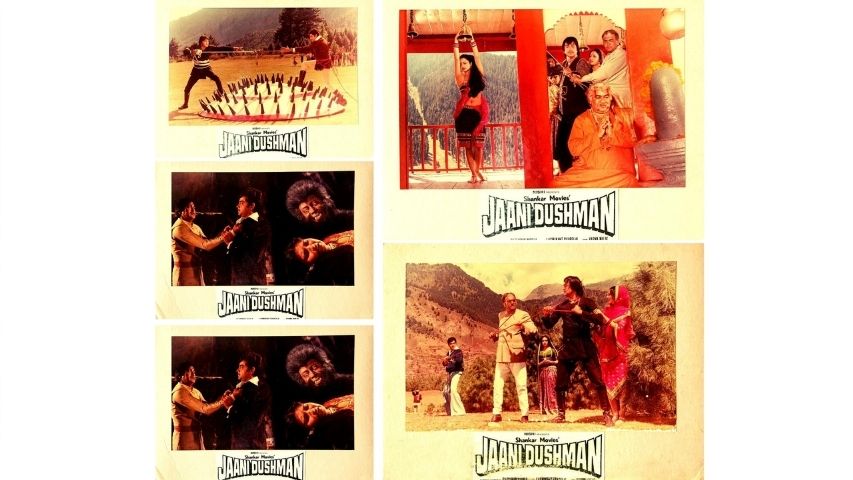 Dharmendra, who was known to Kohli personally, was approached to play the part eventually assigned to Vinod Mehra. Vinod Khanna too was approached for the role essayed by Shatrughan Sinha. Ranjeeta who was on a high after the hit Laila Majnu (1976) was offered the role subsequently played by Shobini Singh opposite Vikram. Shashi Kapoor had also signed on but opted out due to date hassles.

Reena Roy had the chunkiest role among all the leading ladies, as she was the director’s favorite after Naagin. She was not cast opposite Shatrughan Sinha although they were a successful jodi. Instead, she was paired with her family friend Sunil Dutt. Rekha, though had a small role to play, stood out every time she appeared on the screen. Shakti Kapoor who was a newcomer then enacted the cameo of a ruffian who rides away with a bride on horseback, much to the annoyance of his parents. At a screening, his father was extremely disturbed to see his son kidnap someone’s bride.

A major section of the footage was shot outdoors in Kashmir, and the rest on sets in Bombay studios. The song O Meri Jaan featuring Jeetendra and Neetu Singh was shot in Kashmir near the lake with both sitting on a tree, which had also been seen in several other blockbusters like Dharam-Veer (1977). 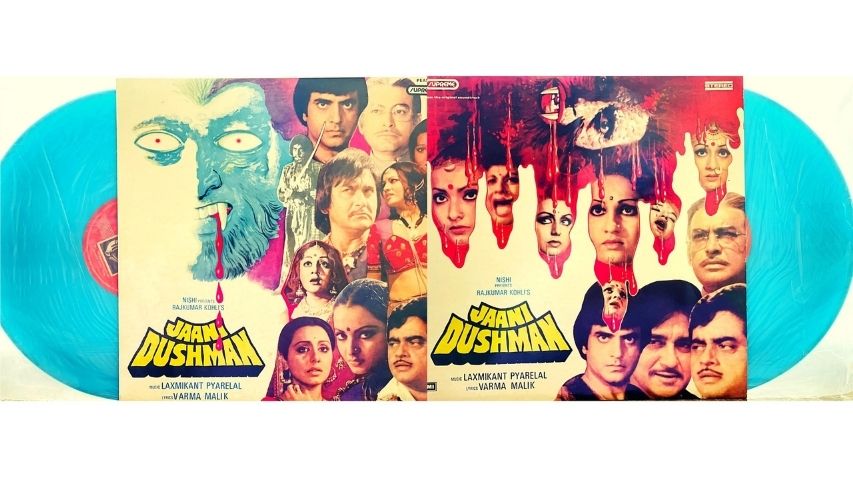 A werewolf suit had been designed for the actors playing the part. Once they were inside it, they could take it off only after a day’s shoot, which was an arduous task. After its release audiences especially loved the train scene in the beginning with Amrish Puri reading The Sixth Pan Book of Horror Stories by Herbert Van Thal.

Jaani Dushman celebrated a golden jubilee at most places. It has always been a sure shot cash-earner whenever re-released in small towns and villages. Its story was duplicated frequently in regional cinema too. Raj Kumar Kohli made another Jaani Dushman – Ek Anokhi Kahani (1999), which was again a multi starrer with Akshay Kumar, Sunny Deol, Suniel Shetty, Arshad Warsi, Sharad Kapoor, Aftab Shivdasani, Aditya Pancholi, Sonu Nigam, Siddharth Ray, Raj Babbar, Manisha Koirala, Rambha and Armaan Kohli. However, it tanked. Incidentally, Amrish Puri and Raza Murad were a part of both of Kohli’s Jaani Dushmans.

Among one of the most-watched films on various OTT platforms and on YouTube even today, how I wish Jaani Dushman would be re-made for the now generation - wishful thinking, perhaps!