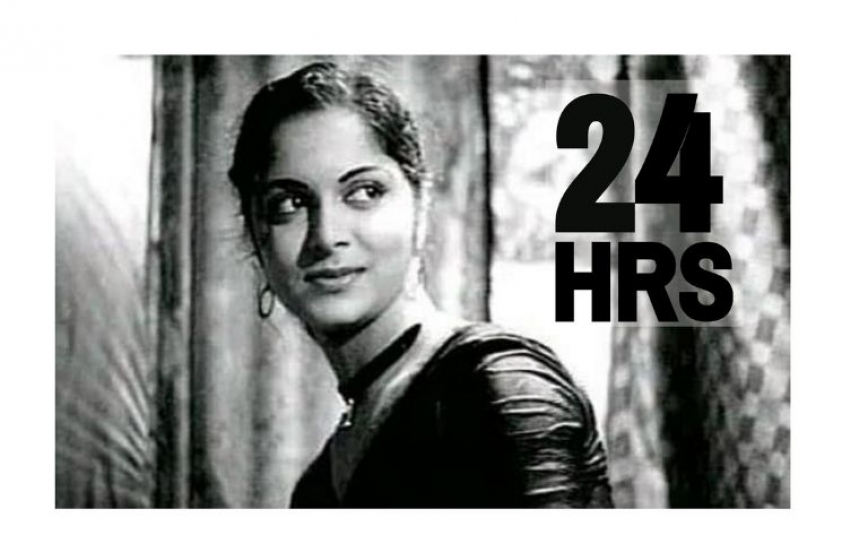 Film historian Dhruv Somani, clocks into Bollywood films, which were set in a tension-packed time frame of 24 hours.

There have been rare films whose plots have been set in a span of 24 hours. Some of them have been mystery thrillers, culminating in a nail-biting finale.

For this Sunday, here’re picking those rarities which have been located in a tight time-span of a single day. 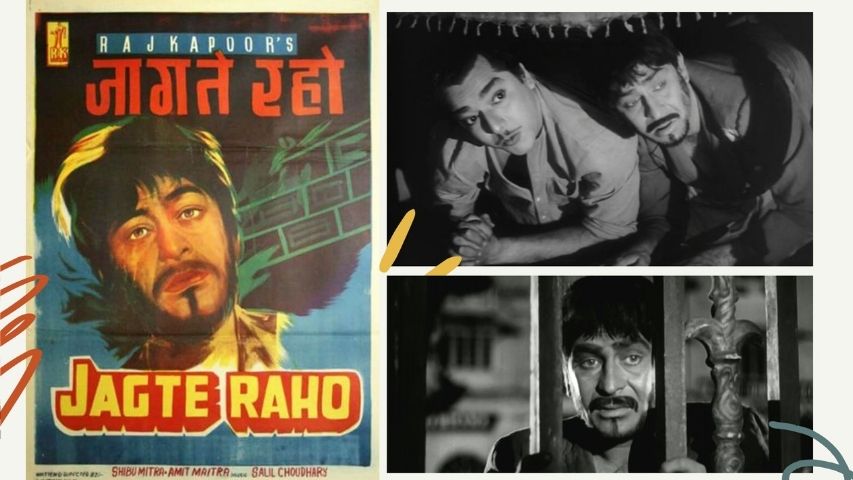 The critically lauded black-and-white Jagte Raho was directed by Sombhu Mitra and Amit Mitra, headlined Raj Kapoor who also produced the film for his R.K. Banner. The plot begins with a penniless villager who relocates from Calcutta to Bombay one night. Tired and thirsty he is unable to find a drop of water anywhere. In desperation he tries to drink water from a fire hydrant but is chased away by a policeman and lands up in a housing colony. The film progresses with the trials of the helpless man who has to face the hard knocks of a metropolis. Inspired by the Bengali film Ek Din Raatre, the Hindi version’s script with alterations, also featured a surprise cameo by Nargis. 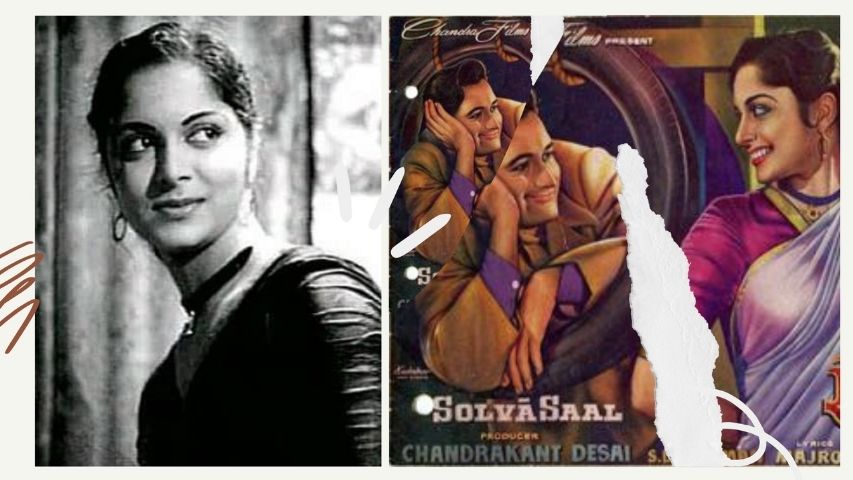 Directed by the upcoming Raj Khosla, Solva Saal had faint echoes of Frank Capra’s It Happened One Night (1934). Produced by Chandrakant C. Desai, the acting crew comprised Dev Anand, Waheeda Rehman, Tun Tun, Jagdeep and Bipin Gupta. The storyline revolved around Laaj whose father has arranged her marriage to his doctor friend’s acquaintance. But Laaj has other plans. She snitches her family heirloom, a pearl necklace, and elopes with her boyfriend Shyam, to Bombay.

En route on the train, a journalist overhears their conversation and follows them in quest of a scoop. Meanwhile, Shyam ditches Laaj and decamps with the heirloom. The journo comes to the rescue of Laaj and promises to recover the heirloom. Follows a romantic caper full of songs and thrills all set in the course of an eventful night. The song Hai Apna Dil Toh Awara composed by S.D. Burman became a chart topper. This was the second time Dev Anand and Waheeda Rehman were paired after C.I.D, also directed by Raj Khosla. 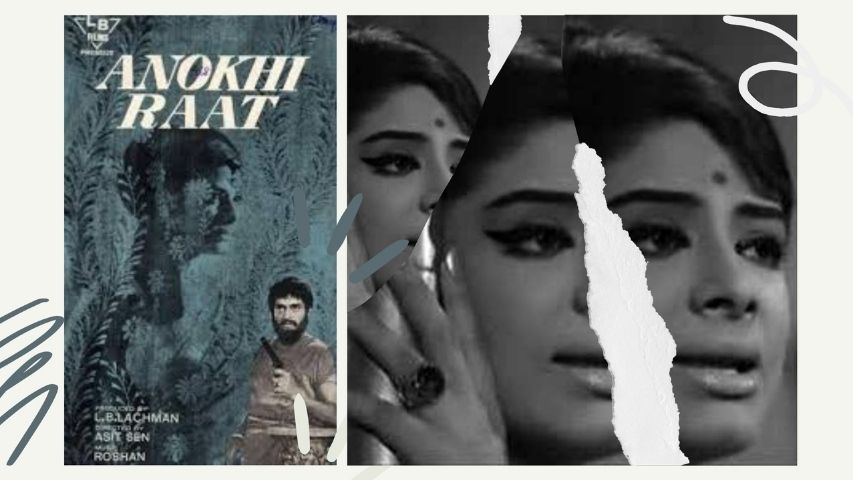 Produced by L.B. Lachman and directed by Asit Sen starring Sanjeev Kumar, Zaheeda, Aruna Irani, Keshto Mukherjee and Parikshit Sahani, this social drama revolved around Rama who in order to save her grandfather’s mansion agrees to marry a much older man Madanlal, who intends to sell the family’s priceless artifacts. Heavy rains and rough weather conditions, along with the entry of an unexpected traveller Awara, a painter, hamper the evil designs, though. Plus, there are four bandits on the run, one of whom is wanted on the charge of murder. The events unfold during the eponymous Anokhi Raat. The music was jointly credited to Roshan and Salil Chaudhary; its most lilting song being Oh Re Taal Mile Nadi Ke Jal Se. 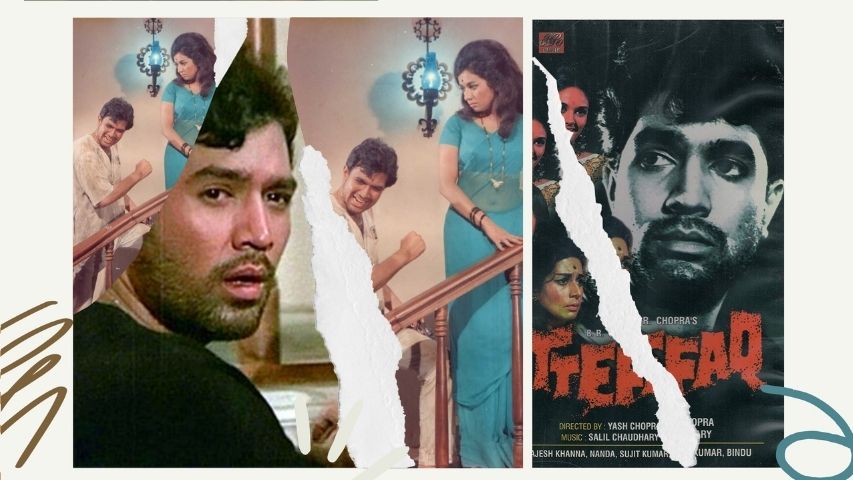 Produced by B.R. Chopra and directed by Yash Chopra, this murder mystery was inspired by the Gujarati play Dhummas, which in turn was obviously borrowed from the English play Signpost to Murder (1964). Way ahead of its times, Ittefaq was shot in a non-stop schedule of 20 days and was devoid of songs as well as an intermission. Rajesh Khanna, who was still to reach superstardom heights, was paired with the extremely popular at the time, Nanda.

Here Dilip Roy, a painter is convicted of murdering his wife besides being declared mentally unstable by the court. Escaping from prison, he lands up at the desolate house of a woman, draped in a blue sari, and threatens her at gunpoint. But something is terribly wrong in the empty house, and the plot thickens leading to a stunning finale.

Ittefaq, which featured Bindu as a prying neighbor, was a box office success. It seems Yash Chopra was very keen to cast Raakhee in the main role but she was under contract with the Rajshree Productions for Tapasya. Shatrughan Sinha was auditioned for Sujit Kumar’s role but the director felt his presence would have been too overpowering. Incidentally, Rajesh Khanna’s role was first offered to Sanjay Khan who declined it politely.

Ittefaq was remade with Akshaye Khanna, Sonakshi Sinha and Siddharth Malhotra, three years ago, produced by Abhay Chopra – grandson of B.R.Chopra. It did well at the ticket windows. 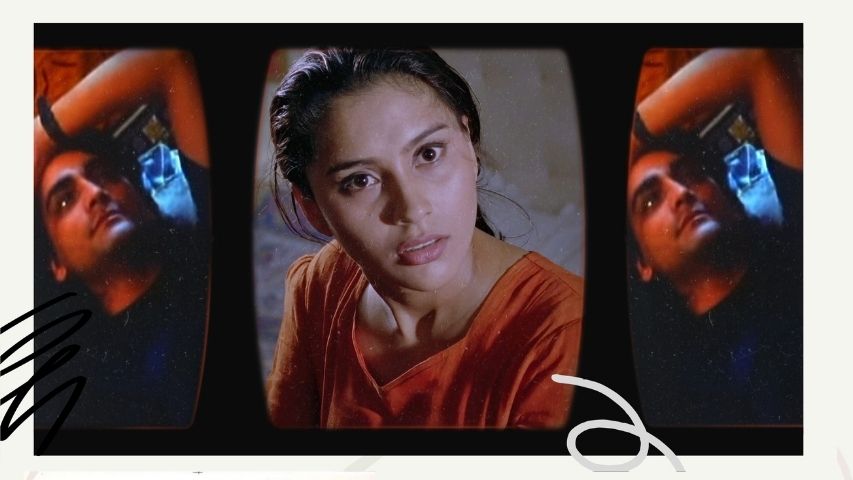 A provocative and rule-breaking film directed by Sudhir Mishra top-lined Murad Ali, Nirmal Panday, Tara Deshpande, Smriti Mishra and Ashish Vidyarthi. A dark thriller, it revolved around Aditya who gets involved in a nasty scuffle with the gang of Ramanbhai when they misbehave with his girlfriend Pooja. Next, the outnumbered Aditya and Pooja are on the run but the gangsters are hot on their trail. The music score by M.M. Kreem was decidedly a plus point. And over time, has amassed a cult following. 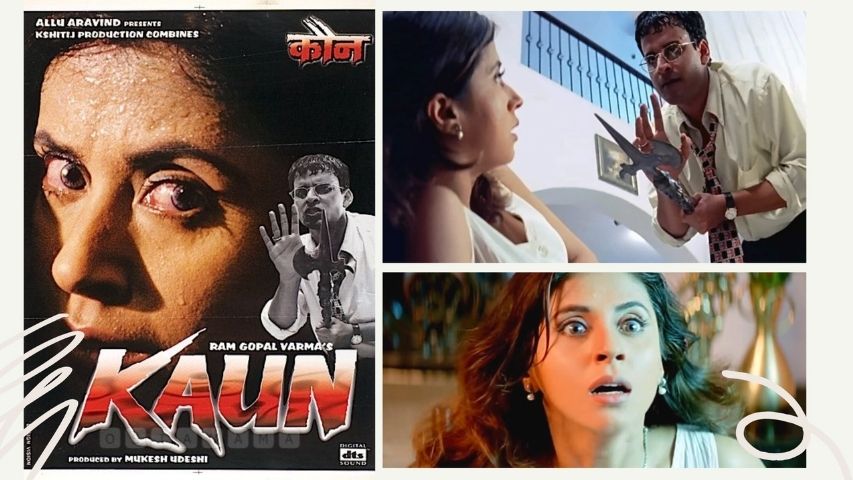 This suspense-stacked experiment, directed by Ramgopal Varma, was appreciated for the bravura performances of Urmila Matondkar, Manoj Bajpai and Sushant Singh. A tight script by Anurag Kashyap, it ventured into a stormy night - when a scared young woman ‘phones her parents asking about their return back home. She watches the news of a serial killer on the run when suddenly the doorbell rings. The confrontation between the intruder and the woman make for spine-chilling moments. RGV was in form as a storyteller and technician then; making Kaun a certified hit. 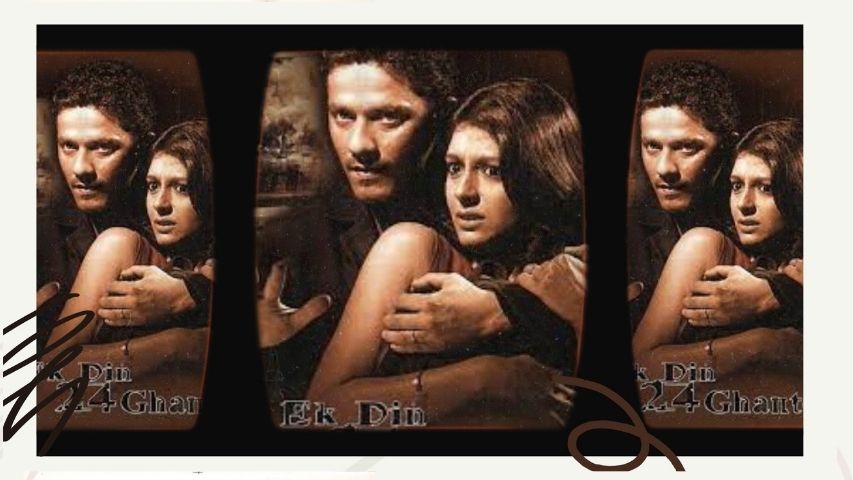 Directed by the late Anant Balani, this caper showcased Nandita Das and Rahul Bose in the lead roles. Inspired by the Germany’s Run Lola Run, the story focused on the rebellious heroine Sameera Dutta who’s in love with Viren, never mind if he owes a huge sum of debt to a casino owner. Viren seeks Sameeras help to extract the money from her wealthy father. Next, Sameera blackmails her father, pointing a gun to his forehead, and threatens she will reveal his deep and dark secret unless he hands over the money right away. The father contacts the police and the tension mounts. The film went ignored because of Balani’s premature death and the lack of any semblance of publicity. 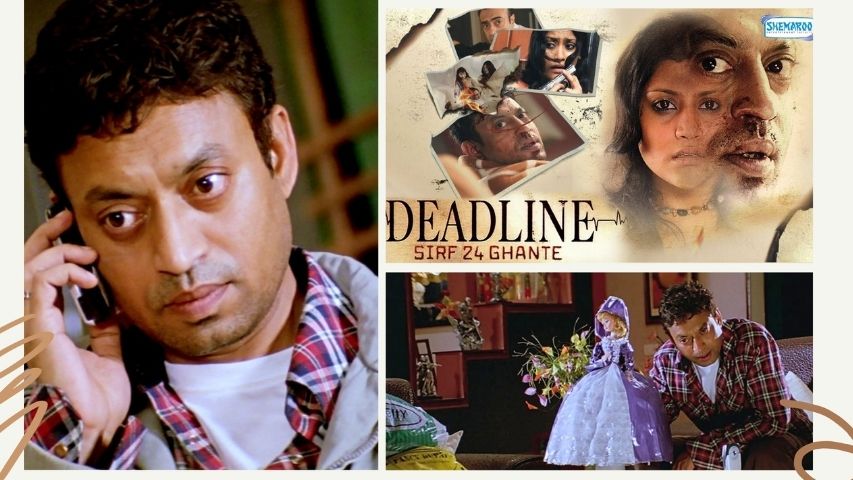 A suspense thriller directed by Tanveer Khan, it starred Konkona Sen Sharma, Rajat Kapur, Irfan Khan, Sandhya Mridul, Rajeev Verma and Zakir Hussain.  Zoom in then to heart surgeon Dr. Viren Goenka, his wife Sanjana and their daughter Anishka who reside in a Mumbai apartment. Anishka is kidnapped and a hefty ransom is demanded for her safe return. The narrative became far too convoluted and predictable to tempt the audience to queue up at the cash counters. 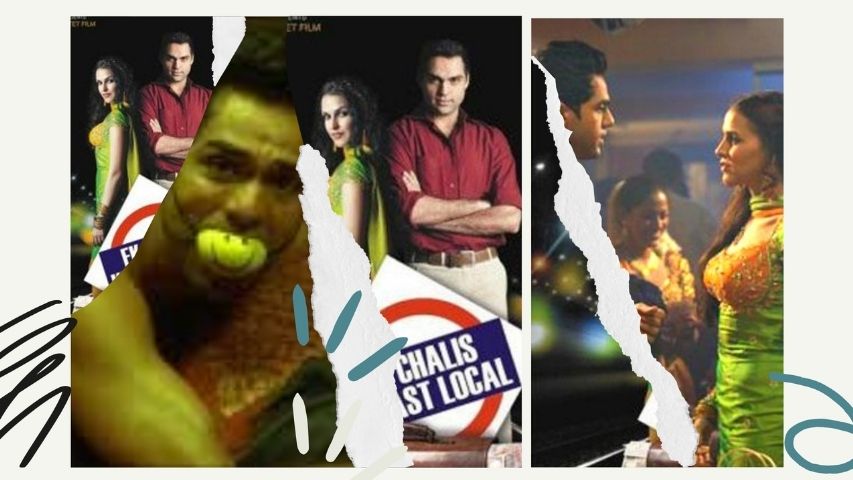 Directed quirkily by Sanjay Khanduri, the effort starred Abhay Deol, Neha Dhupia, Nawazuddin Siddiqui and Vinay Apte. Located on the streets of Mumbai, the black comedy spotlighted Nilesh, a call center employee who after a booze binge misses the last local train from Kurla to Vikhroli at 1.40 a.m. Evicted by a police constable from the railway station, Viren reaches an auto-rickshaw stand where he meets Madhu who has also missed the last train. Together, they walk into a pub to kill time and are lured to engage in a round of gambling. Expectedly, they have been made suckers. How they manage to make it to a new morning is replete with surrealistic situations and oddball characters. Zany and fun, the endeavor was particularly remarkable for Abhay Deol’s convincing performance of a common man. 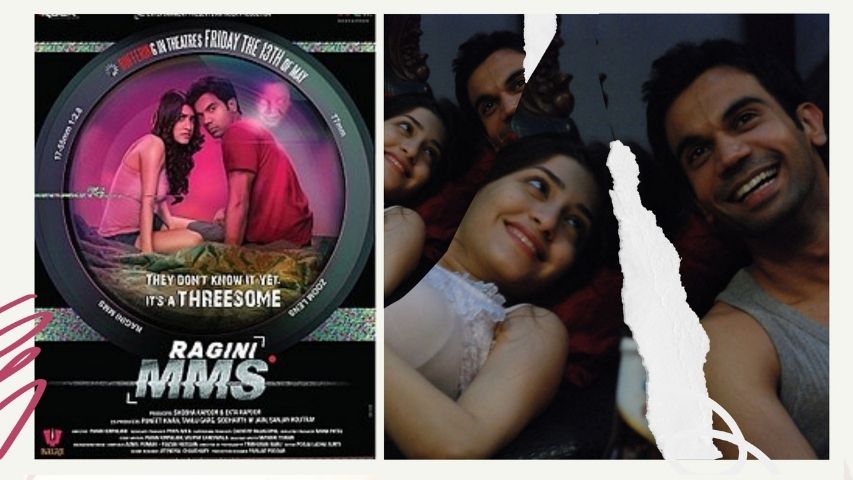 This sex and horror mélange was directed by Pawan Kripalani and produced by Balaji Films. The story was inspired by a cheesy real-life MMS leak, about a couple making love, which made headlines in north India. It also borrowed elements from Hollywood’s Paranormal Activity and Stephen King’s novel Gerald’s Game.

Over then to Uday and his girlfriend Ragini who travel to an abandoned house to find privacy. Uday is notorious for making sex tapes, though, and Ragini is his new victim. As they move towards the bedroom to get intimate, they are interrupted by unexpected guests who warn them about the past of the house where a (so-called) witch had been killed by her own family; ever since then, her spirit on a vengeful spree has haunted the house. Next, the screenplay consistently takes spooky twists and turns. Impressive performances by Rajkummar Rao and Kainaz Motivala made this shudder-fest a must-watch. 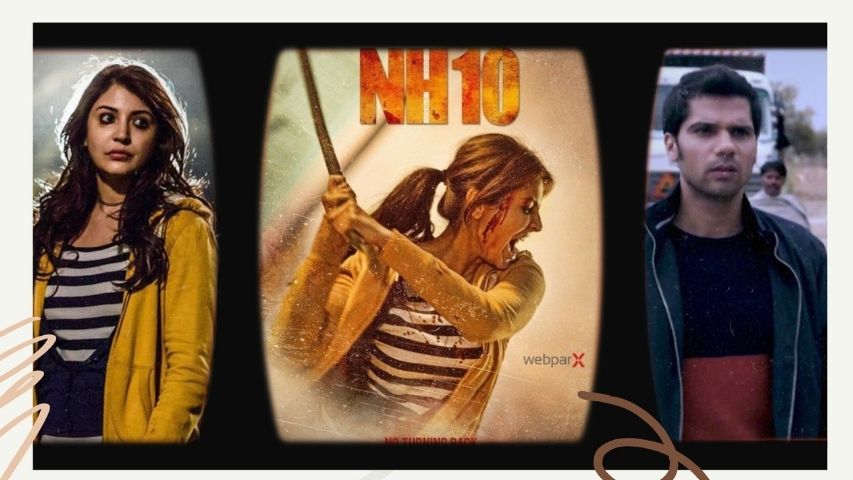 A disturbing film directed by Navdeep Singh and produced by Anushka Sharma, it starred herself, Neil Bhoopalan and Deepti Naval. The focus is on a woman, who has lately undergone a traumatic experience, and her hot-tempered husband. They take off on a short road trip, which turns into a nightmare. Essaying the topical subject of honor killings in north India, the edgy thriller was perfectly calculated to give the viewer Goosebumps.