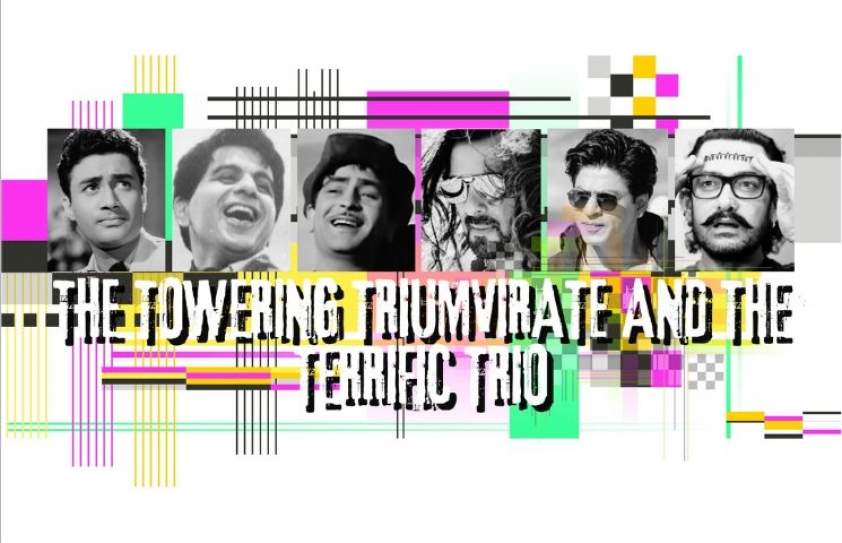 Dilip-Dev-Raj or Aamir-Salman-Shah Rukh? Monojit Lahiri invites readers to go for it while he attempts to objectively analyze this tricky subject for a reality check.

Comparisons may be odious but it would be interesting and revealing to do it across generations.

If the late, revered thespian’s (Dilip Kumar) departure and its attendant impact was any indication, his absence from the scene and screen, for over two decades, clearly didn’t matter. The event seemed to unleash a spontaneous and collective mourning in India and Pakistan as well as  everywhere else that his fans resided.

Along with his two legendary colleagues, Dev and Raj, they did indeed present a formidable, matchless and magical triumvirate that enthralled their fans from the late forties to the seventies. Admittedly, there were other heroes too, Ashok Kumar and Balraj Sahni, heading the list, but this troika cornered the popular pulse full on, whenever and wherever their releases happened. Even today, for senior citizens, these three remain the alpha and omega of all that constitutes charisma.

Similarly, from the late eighties onwards, the new triumvirate have held centerstage. SRK, the Badshah of romance, Salman, the topless bad boy with a heart of gold and Aamir, Mr. Perfectionist, forever inviting us to sample his version of surprise and delight. Sure, there are a slew of other stars in Akshay, Ajay, Hrithik, Ranbir and Ranveer, but the fact that despite the recent disappointing strikes at the BO, the trio still remain the red-hot objects of attention from the media and desire for their zillion fans is testimony to their fan following. Even as we speak, one appearance from them on any Show, reality or otherwise, invariably unleashes a wild stampede!

Great, but cutting to the chase: who is hotter, bigger, better in terms of looks, acting and impact? 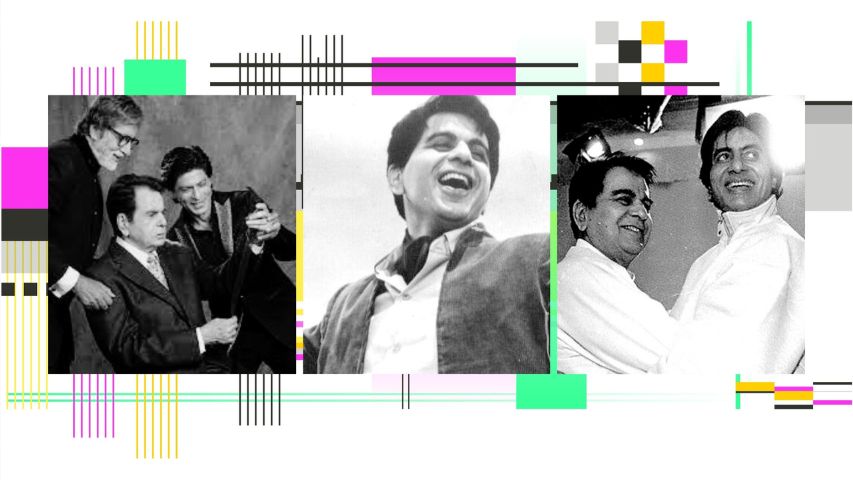 Right at the start, let’s get some fundas straight. In this narrative, objectivity is critical as is context, in terms of time, place and circumstances.

When Dilip-Dev-Raj entered the scene, cinema was perceived. by the makers of that era, as a medium that was an art, entertainment and social force. A nation like India with its honeycomb of identities, defined by language, religion and a host of other criteria, would need social engineering of some scale to weld itself into a strong nation and cinema could be the ideal force to supply the motivation. Idealistic?

Maybe, but the new-found independence did charge up the intellectual and cultural thought-leaders who did indeed view cinema as an agent of change. The concept of glitz, gloss, glamour & stardom, as we know it today, was unknown - with popularity and appreciation the ruling mantras. Hollywood, of course, was a huge reference point with studios, actors and audiences. Little wonder then in regional and popular cinema, tons of movies were either filched, photocopied or inspired by Hollywood classics of that era. The trio too were in the frame with Dilip echoing Brando, Raj, Chaplin, and Dev, Gregory Peck.

However, it must be quickly pointed out that despite these surface imitations, all three carved out very distinctive images that differentiated their brand value to their audiences from each other. Dilip brought a mesmerizingly seductive tragic-hero persona, a brooding lover-as-loser image that resonated hugely with audiences who believed that our sweetest songs are those that tell of saddest thoughts. Raj introduced the good-hearted, happy-go-lucky tramp mandated to spread love, joy and laughter; the painted smile beneath which lay a broken heart. Dev offered the dashing, modern, fast-speaking, stylish young dude who zonked the Gen X of that time. He was Mr. Cool. So, each of them presented individual images that found takers across every spectrum of society.

Cut to the new trio for whom it was the right time, right place! Amitabh Bachchan had slung out the romantic hero, read Rajesh Khanna, with his fists of fury that epitomized his persona as the ‘Angry Young Man’. He was just plain lucky to embrace this image at a time when cynicism, frustration and disgust defined the corrupt 1970s. Everyone wanted change, but was helpless. 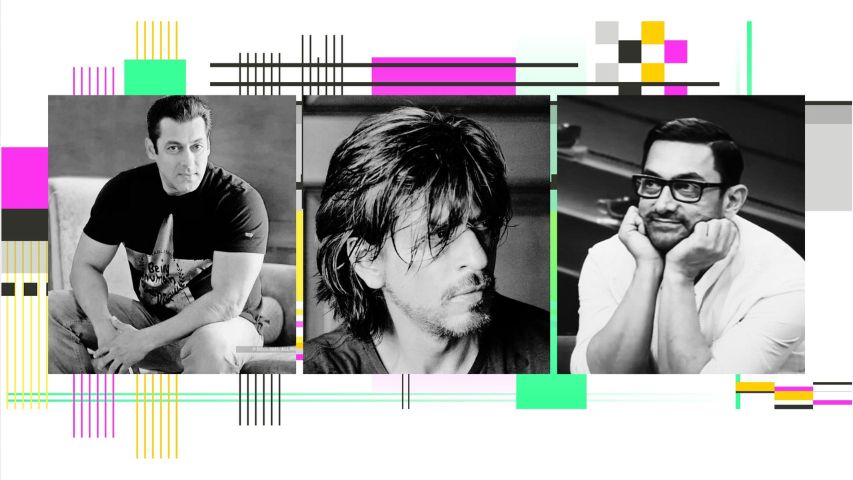 Bachchan represented that change with violence–without-apology, a blazing rebel who took on the corrupt, cruel and unjust establishment as a one-man-army with means-justify-the-end as his motto. While both the Big B and his image caught fire to baptize him as the One-Man-Industry, an overdose of the same role and rhetoric, time after time after time, diluted and killed the early thrills and charm.

Times had changed. Perceptions and society had changed as had values, and new-age audiences found both the image and the bhashans hopelessly dated and corny. Bachchan’s Toofan & Jadugar marked the end of his AYM image and his Angry Old Man was bad news. The youthquake had arrived and it was time to hand over the AYM his hat, walking stick and indicate the door. The new trio were the new stars and did Salman-Aamir-Shah Rukh rock their fans out of their skulls?! Even as I write, and close to 3 decades of their signature whoppers, Maine Pyar Kiya, QSQT and Deewana/Darr, the 3 Musketeers still remain top-of-the-mind headlines.

Moving closer to which group is better, is tricky business because basically, apart from objectivity and subjectivity, it is generation-specific. Among the earlier group, Dilip himself, along with most others, considered Dev the best looking of the three. His ada, angular walk and mannerisms appealed to one section of the audience. Dilip’s heavy-duty brooding, tragic hero image appealed to the more serious lovers of gravitas. Raj’s tramp image, with powerful socialist messages and passionate romantic scenes with Nargis, mesmerized yet another section of the audience.

These three leading men didn’t know or have any other distractions and so gave their all to their calling. The media too, apart from Baburao Patel’s vitriolic Filmindia, a very influential film publication, was collaborative, cordial and kind. Life itself was slow and leisurely and films took their time in the making with the entire unit totally involved. The Director was the acknowledged captain of the ship and his word was law.

There were titans, Bimal Roy, Guru Dutt, Mehboob Khan and Raj Kapoor, whose vision and mission were inspirational, thought-provoking symbols, and they were relentlessly obsessed with their uncompromising pursuit of excellence. Their mantra of engagement, entertainment and enrichment of the mind were exemplary. This aspect was fully endorsed and shared by all, writers, lyricists, music directors, singers, even studio heads, who formed a knowledgeable, informed, passionate and committed group, fully dedicated to offer cinematic fare that appealed to both, the classes and masses.

Sensationalism and titillation were a total no-no and anything bordering on the immoral was solidly dumped onto the negative characters - villains and vamps! It was all clean, uncomplicated, sweet, feel-good, content-driven storytelling that was paisa wasool all the way. While there was competition, the big three held their own, imprinting their stamp in the hearts and minds of their fans that endured, despite the changing taste, time and values. The fact that even today, they are remembered with so much love and affection, makes them special. So, does all this add up to make them better or superior to the new age trio?

Since change is the only constant and each generation has its very own heroes, the answer, objectively, dispassionately, has to be… No! Why?

For one, the frenzy, pressure and competition that accompanies the Khans is unbelievable. Further, the monster of today’s media and PR machinery is forever on over-drive in ballistic fashion, making confusion confounded. The hype that powers the launch of every newbie, especially star kids, can make even the most confident star shaky and insecure. All this, to a new-age audience forever restless and desperate for novelty and instant gratification - so different from the earlier era, loyal, patient, kind.

SRK famously joked that every time a new kid on the block arrives, the predictable A STAR IS BORN headline goes up along with the mandatory message that our expiry date is near and funeral preparation better get started. He had said once, “Well, I guess we are like the cat with 9 lives because even after several red-alerts, we are still around and doing our thing.” This real, or created, madness didn’t exist earlier. 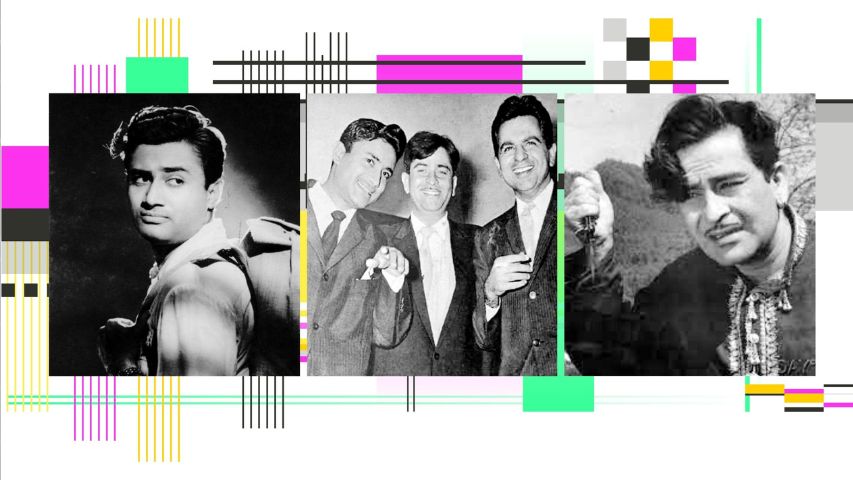 Next, the quality of the directors. There is no Bimal Roys, Guru Dutts, Mehboob Khans or Raj Kapoor; instead, there are Karan Johar, Ayan Mukherjee, Sanjay Leela Bhansali, Adi Chopra, Rohit Shetty, Zoya Akhtar and Farhan Akhtar and gang. Should the latter be thus summarily scoffed at and dismissed as exponents of trash-with-flash, all sound n’ fury, glitz and gloss, signifying… nothing? That would be grossly unfair. This is the new millennium, not the gentle 50s and 60s, consumed by consumerism, where the new slogan is Dil Mange More! More than the other two, SRK represented this new spirit, KKHH and more importantly DDLJ, in blazing fashion, stylishly fusing tradition with modernity; revering the past while bogeying with the future!

If Salman’s swag was loved and Aamir’s films were adored, it’s because the three struck a chord with Gen X that reflected the times. It also demonstrated the audience’s capabilities of engaging and enjoying varied content, dished out by the Khans, and other stars, in open-minded fashion. Kal Ho Na Ho and Chak De India, Ek Tha Tiger and Bajrangi Bhaijan, Fanaa and Rang De Basanti… they were all happily consumed by the fans.

Next, can one ever forget the biggest phenomenon - the hydra-headed monster called Social Media?! The age of anonymity has vanished, replaced by the age of aggressive intrusion. The era of one-sided communication relating to movie-viewing or waiting breathlessly for film critics’ reports a couple of days later, are over. Within half an hour of the first day-first show, social media, Facebook, WhatsApp, Instagram and Twitter especially, is flooded with reactions and responses that can and does massively influence viewers.

Social Media has converted every single individual into a high-pitched and hysterical critic, not only of movies but of lifestyle! Takes, opinions and views of various hues, from the sublime to the ridiculous, flood the space changing the earlier shy, hesitant, introverted and reticent viewer into a raging, blazing, opinionated mouse that roars nuisancely! All this did not confront the earlier trio. Also, if Salman Khan continues to unleash hit after hit with, allegedly, stories and directions tilting his way, it means that capitalizing on brand value is his secret to success, and Bhai, not the director, is the USP of his monster hits. While times are changing and the new trio are indeed looking for re-invention, their massive popularity remains no mean task in an age of fierce competition when every Friday can bring a new surprise.

So, everything considered, it’s really a generational thing - a time and place thing. Each generation brings its own challenges and opportunities, so comparisons, while forever tempting to engage in, are bound to be unfair, inaccurate and irrelevant.