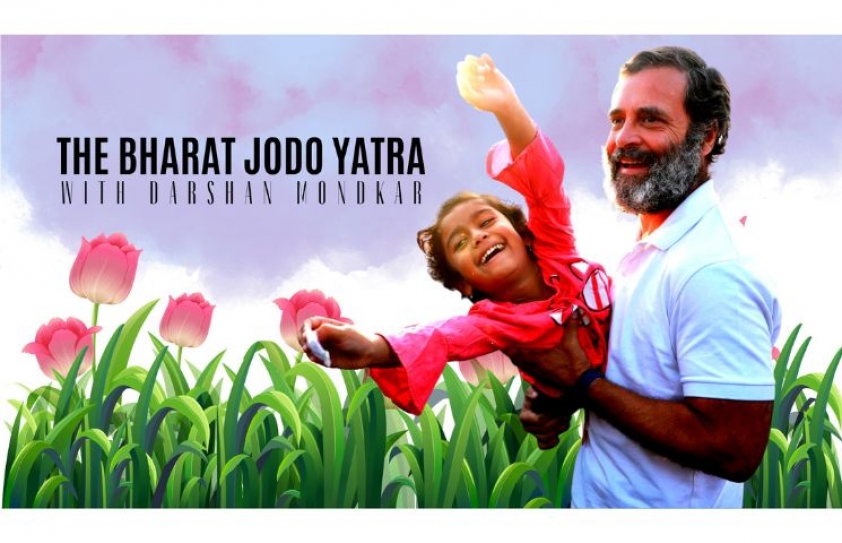 Good ole’ author, activist and social commentator Darshan Mondkar walked beside Rahul Gandhi for 20 mins and had a conversation with him. Curious about his experience, Vinta Nanda scrolls down his Facebook timeline picking up nuggets of great value.

Here, in this article, I piece together Darshan Mondkar’s conversation with Rahul Gandhi to highlight the excitement that the Bharat Jodo Yatra is generating among people from across socio-economic and socio-cultural groups. The moderates, liberals, intellectuals, pluralists have been bashed relentlessly for the last eight years now. Journalists are called Presstitutes, Liberals are Liberandus, Seculars are sickulars, intellectuals have become urban naxals overnight, and the list of words alienating sensitivity and sensibility from brazen majoritarianism is endless…

But who are the people labelling? It is a question that must be answered. Make no mistake, troll armies have been unleashed on social media to do this job multiplied by thousands - to insult, humiliate and shut down voices of reason, which make the Right-Wing agencies feel threatened.

And who comprises these troll armies? Well, that’s an interesting question to say the least. Scores of people are paid pittances to post pre-designed commentaries, in short form, long form and several Indian languages, on Twitter, Facebook, Instagram and every other social media platform – it’s important to note that almost all of them are unacquainted with their own cultures and don’t even care to read what they recklessly flood the social media universe with.

It’s been eight long and dark years for every reasonable mind, which cannot retaliate with the abuse or the violence it is subjected to day in and out. Which then, especially for those asking the question, “What is it about the Bharat Jodo Yatra, that it is gathering so much momentum,” here’s the answer: It is about healing, it is about affirming to the individual/s who believe in peaceful discussion as against hate-filled and vitriolic exchanges based on half-truths and fake narratives that there is hope, that he or she is not alone, that there are multitudes who will join the march to prove there are many ‘more’ sensible people in this world that the brazen and brash.

And, there is nobody among the rationalists, except one man called Rahul Gandhi, who has the confidence and the courage to trust his instinct, to believe that humanity at large is a caring lot, and that brotherhood and sisterhood among diversities is a thing that has outlived and survived every moment of history in India.

And it is he, today, who is walking the talk. The truth is there for everyone to see – so what if mainstream media blocks the Yatra from all its pipelines, so what if the somnambulists believe that politically there is nothing in this that Rahul Gandhi will achieve. To them I say, “Dream on…!” 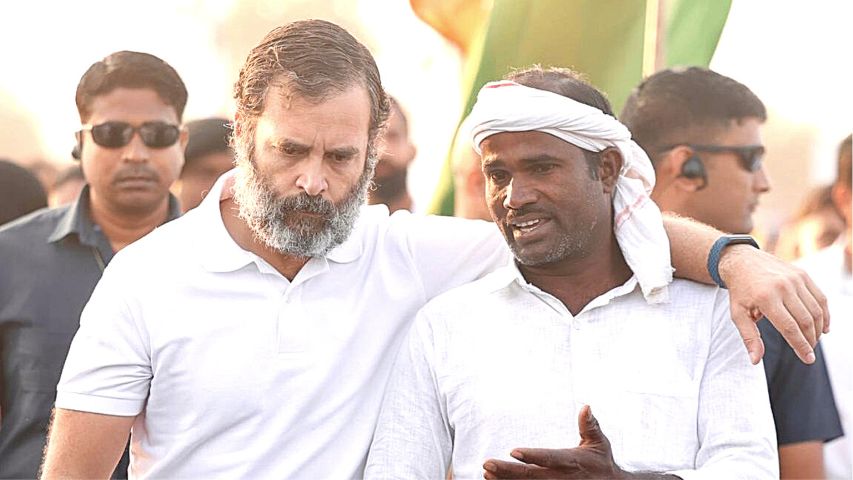 Here below I am reproducing Darshan’s conversation with the man of 2022, Rahul Gandhi, at the time he walked alongside him for 20 minutes.

Darshan: Your walk is giving us a lot of hope, what do you have to say to society, about the fear that is being generated?

Rahul: The fear is not in the society, the fear is inside you. Tell me, aren't you scared, coming here, walking with me?

Darshan: Of course I am!

Rahul: And yet you are here. Because you have conquered the fear inside you. That's what everyone has to do. If you are not afraid, they can't scare you.

Darshan: (As Rahul put an arm across his shoulder) You know Rahul ji, around 353 girls are going to die when they see you put your arm on my shoulder.

Rahul: Why? (He asked innocently).

Darshan: Because of jealousy.

Rahul: (Bringing me closer) Really... Okay then let's give them something more…

Darshan: Why are you walking?

Rahul: Do you know the difference between Pooja and Tapasya?

Darshan: Yes, Pooja is worship and Tapasya is penance.

Rahul: Tapasya comes from the word 'Tapp', which means heat. When you do Tapasya you generate heat. The heat that consumes you. It hurts you, it pains you and then you achieve.

Darshan: But what do you hope to achieve?

Rahul: Your love, your blessings, our unity.

Darshan: There could have been other ways.

Rahul: Yes. Sure. But I do not want to achieve anything without putting in an effort, without doing Tapp. Unless it hurts me, it pains me, any achievement is not worth it. This is my Tapasya.

Darshan: And I am sure you will achieve.

Rahul: One has to do Tapasya without expectations and only then will it be successful. I don't know whether I will achieve what I have set out to do. But I will keep burning myself till I do.

Darshan: How do we, ordinary common folk, deal with the hate narrative being spread?

Rahul: RSS and BJP are dangerous, they want to control you through fear and for fear they use religion. Tell me something, what are you?

Darshan: I am irreligious.

Rahul: But you must have been born into some religion right?

Darshan: Yes, I am a Hindu by birth.

Rahul: So, have you read the Vedas?

Rahul: I have. All of them. Do you think all those who claim they are a Hindu or Sikh or Muslim have really gone through the pain of reading their scriptures themselves?

Darshan: I hardly think so…

Rahul: So when they suddenly start claiming how proud they are of being a Hindu, on what premise do they base this on? 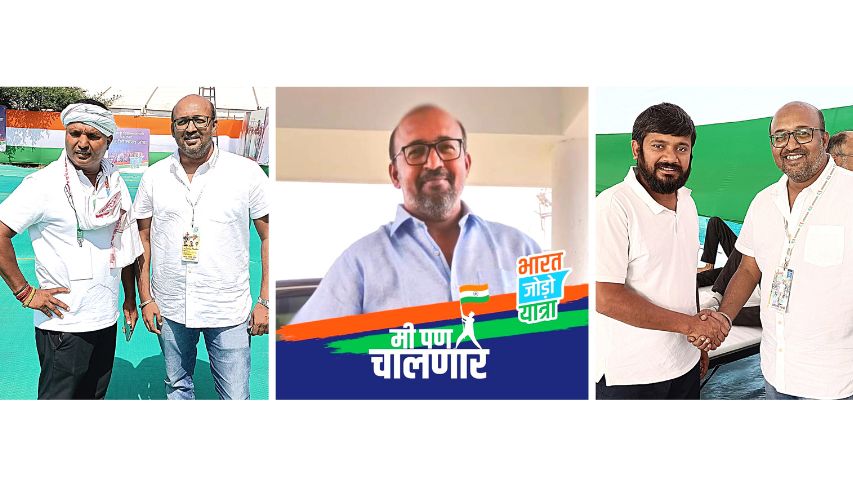 Rahul: This creation of false pride in you leads to extremism and then the fear of the other religion gives RSS the control over you. Once people start figuring this out and start becoming humans first, before anything else, then we will overcome the BJP line of thought.

Darshan: Inshallah, we will…

Rahul: (Putting his elbow on Darshan’s shoulder and coming closer) Are you a Hindu or a Muslim? You just said Inshallah. You told me you are a Hindu

Darshan: I also said that I am irreligious and I don't think religions make one human better or different than another. We are all the same.

Rahul: (With a big smile on his face) See, you are already there. That's how it should be…

Rahul: Are you an atheist?

Darshan: No. I am indifferent

Rahul: You belong to a special school of thought. Do you believe in rebirth?

Rahul: You know, I asked my Dadi once, "What would you like to be remembered as after you are gone.” And Dadi said, "I don't, I will be gone." You are from her school of thought… religiously speaking.

Darshan: I am allowed to use this story, right?

Rahul: That's up to you. Just keep being human. Mahatma Gandhi travelled across India, do you know why he did it?

Darshan: To fight the British and free our country.

Rahul: Not at all. Don't even compare. I have no false notions about myself. I am doing this for myself. This is my Tapasya. I have to understand the diversity of India.

Rahul: When I understand the different aspects of India from the biggest town to the smallest village, then I will truly understand the pulse of India. This is my learning.

Darshan: And in the process get votes?

Rahul: That is not the reason I am walking, but if yes, then why not? First thing I have to do is finish my Tapasya (walk) and I believe I can do it.

Darshan: I believe you can do it too, we all do. Thank you Rahul Sir, for the time you gave me and having such an open conversation with me. You are really very nice to talk to.

Post Script: When asked what was the compelling reason for him to join the Yatra, here’s what Darshan Mondkar said: I had made up a resolve that I will write about Rahul Gandhi - the misjudged and maligned person and let people have an insight into what he really is. While Rahul wants to understand India, it is also important that India understands Rahul, beyond what the media and the propaganda against him wants to portray him as. I hoped to talk to him and it happened. And now I hope the conversation I had with him will make the difference. The least I can do for someone who is relentlessly walking for 3,500 kms across India, is to walk a few kilometres along with him, so why not? And this is why we should all be walking with him.