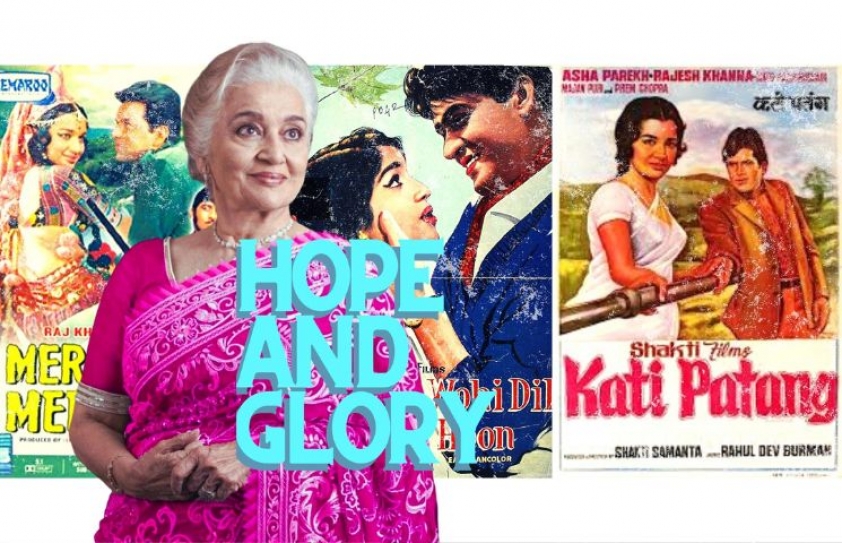 Film historian Dhruv Somani narrates the long and fulfilling journey of Asha Parekh, also known as The Hit Girl who has just been honoured with the Dadasaheb Phalke Award.

She is a star from the golden era of our movies of innocence and grace; when boy-meets-girl stories were wonderful feel-good entertainers. And with her score of major hits, she is a superstar who represented the swinging era of the 1960’s and well into the ‘70s. Just a few days ago, it has been announced that she will be given the Dadasaheb Phalke Award, the highest film accolade bestowed by the Government of India.

An all-rounder, especially superior at dance numbers while having a flair of comedy, she emoted effortlessly. Asha Parekh was a darling not only of the audiences but also of film producers and directors who would line up to sign her since she spelt box office success.

The camera adored her. Practically all her films became money-spinners, earning her the tags of The Hit Girl and The Golden Girl. Having known her personally, here’s tracing the long and fulfilling journey of this fabulous actor who turns 80 on October 2.

Asha Parekh an alumna of South Mumbai’s The J.B. Petit Girl’s High School, devoted her after school hours to learning Indian classical dance, which made her turn from a tomboy to a vivacious dancer. She was a popular student of the school and would often entertain her seniors by making crazy faces, prancing around in class, dancing at every given opportunity and brewing imaginary stories. Back at home she would be busy dancing to popular Hindi film songs, which would play on the radio.

She was the chosen one. J.B. Petit School was celebrating its 75th year annual function, and the principal invited a film star as the chief guest. Actor Premnath agreed but with the condition that Asha would perform a dance number. Her superlative performance brought the house down, after which she was often called to perform at the local celebrations for Ganpati, Dussehra and Diwali. 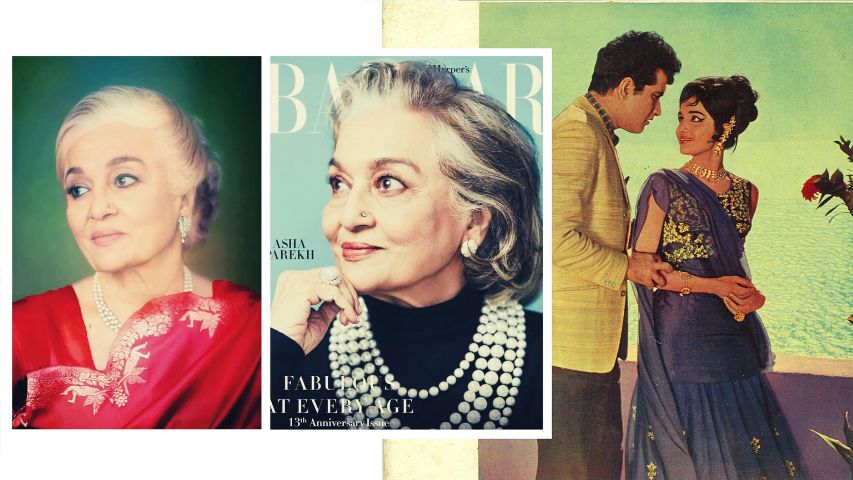 She was initially noticed by Bimal Roy who offered her a brief role in Maa (1952), starring Bharat Bhushan and Shyama. He cast her again as Tabassum’s friend in Baap Beti (1954), which had Nalini Jaywant as the heroine. Acting for her was like a picnic. At times, though, she would doze off in her mother’s lap between the shots. She featured in other brief roles: Aasmaan (1952), Chaitanya Mahaprabhu (1954) and Ayodhyapati (1956). Her dream break came when she was offered Aasha (1957). In which she danced with Vyjayanthimala to the C.Ramchandra song ‘Chal Chal Re Kanhai’.

Still in her teens, director Vijay Bhatt had liked her as a child artist in Chaitanya Mahaprabhu and screen tested her for the lead role for his Goonj Uthi Shehnai (1959) opposite the Jubilee King Rajendra Kumar. However, she was dropped because the director thought she lacked star quality. She was replaced by Ameeta who was riding high after the success of Tumsa Nahin Dekha (1957). Another setback came when she lost out on co-starring with Kishore Kumar for Bewaqoof (1960), in which she was replaced by Mala Sinha. This much-coveted opportunity to work with the legendary V.Shantaram went asunder.

There was hope yet. Top producer Sashadhar Mukherjee invited her and her mother to his residence at Grotto Villa. He requested her mother to enrol her at the Filmalaya School of Acting, which she joined after much reluctance but would hardly attend classes. There she met the niece of character actor Hari Shivdasani, Sadhana. It was around then that Filmalaya was scripting a musical love story to be directed by Nasir Hussain who had quit the Filmistan banner after the success of Tumsa Nahin Dekha.

At the outset, a project with Shammi Kapoor and Nutan failed to take off. It was then resolved that either Sadhana or she would audition and whoever was better would be cast as a heroine in a Filmalaya production. Director R.K. Nayyar who was scheduled to direct his first film for Filmalaya was keen to introduce Sadhana in Love in Simla as he was fascinated by the newcomer and was opposed to Sadhana being directed by Nasir Hussain. An excuse was made that Sadhana had a stye on her right eye and therefore couldn’t show up for the audition. Asha Parekh’s audition was done under the supervision of Nasir Hussain and voila, he had found his heroine.

Here’s tracing Asha Parekh’s estimable oeuvre. Incidentally, she was considered “lucky’ since the songs assigned to her would climb the popularity charts. 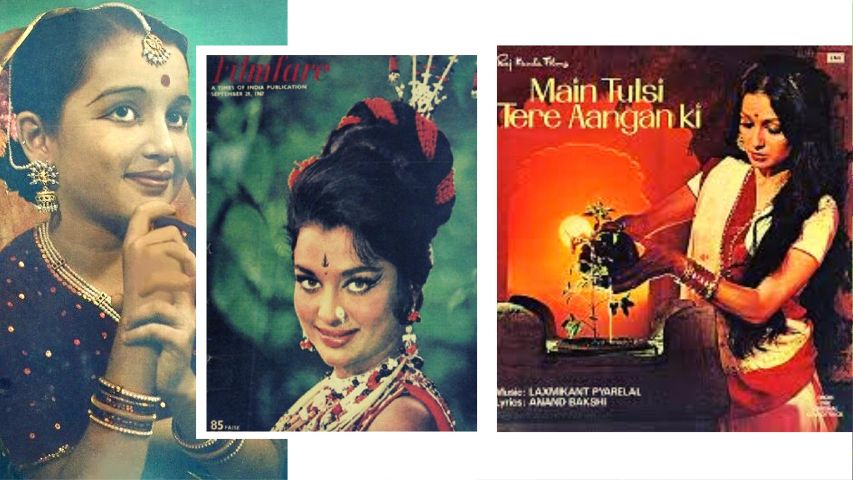 Dil Deke Dekho (1959) opposite Shammi Kapoor was her debut film. She was a raw newcomer who mastered the art of acting with experience. In Dil Deke Dekho director Nasir Hussain and co-star Shammi Kapoor made her feel comfortable and supported her in every possible way while she played Neeta Narayan, a London-returned heiress. The black-and-white film, with an outstanding music score by first-timer Usha Khanna, was premiered at Bombay’s Novelty cinema and became an instant rage.

A star was born. Next, Hum Hindustani (1960) was conceptualised keeping in mind the post-Independence era in which she was cast opposite Sunil Dutt.

Ghunghat (1960) was followed by Gharana (opposite Rajendra Kumar), which were both were major hits. Nasir Hussain’s Jab Pyar Kisise Hota Hai (1961) with Dev Anand and Pran was a huge success because of its music by Shankar-Jaikishen. The song, ‘Jiya Ho Jiya O Jiya Kuchh Bol Do’  was suggested by Shammi Kapoor as he called Geeta Bali ‘Jiya’ affectionately. Shammi Kapoor was to play the male lead but due to creative differences Dev Anand was signed.

Nasir Hussain felt she and Joy Mukherjee made an ideal pair. So, after the success of their first film Phir Wohi Dil Laya Hoon, they were once again cast by Pramod Chakraborty in Ziddi (1964), another commercial triumph.

The Nasir Hussain mystery thriller, which did wonders for her career and is a cult film today was the Vijay Anand directed Teesri Manzil (1966) – it was again opposite Shammi Kapoor. Though originally Dev Anand was signed as the hero, he dropped after a nasty quarrel with the producer at a party where they almost came to blows. This happened at the engagement ceremony of Sadhana and R.K. Nayyar.

The same year Pramod Chakraborty’s Love in Tokyo co-starring Joy Mukherjee became a blockbuster. Her song ‘Sayonara Sayonara’ as a Japanese girl wearing a kimono became memorable. Raj Khosla’s Do Badan (1966), with Manoj Kumar and Simi Garewal, was truly a turning point of her career because she was praised for a sensitive performance.

Aaye Din Bahar Ke (1966), Upkar and Baharon Ke Sapne (1967), Shikar, Kahin Aur Chal and Kanyadaan all came in 1968, which clicked big-time. Only Baharon ke Sapne didn’t because its theme was downbeat and both the hero and the heroine died in the end. The ending was changed but to no avail.

1969 saw her in Sajan and Mahal, which were both suspense films. Aaya Sawan Jhoom Ke, Chirag and Pyar Ke Mausam (1969), both romantic dramas, were instant hits. It was a decade of continuous highs. Asha Parekh by now had come right to the top of her game. 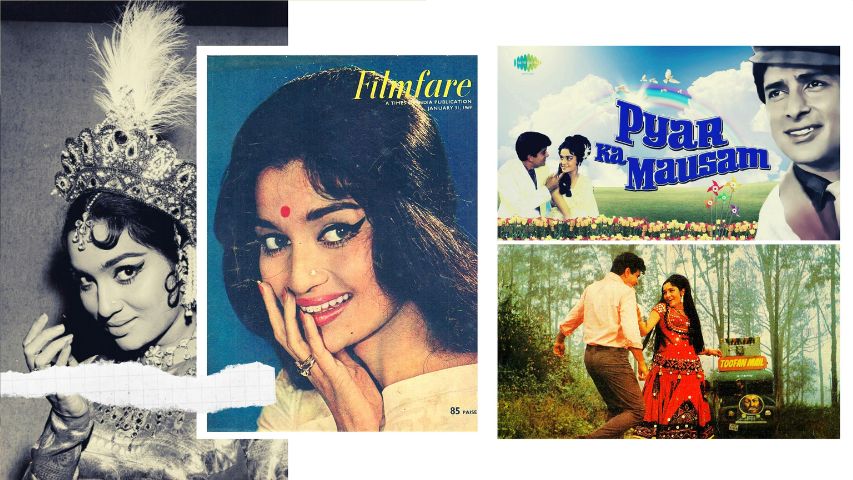 She welcomed the new decade with Shakti Samanta’s Kati Patang (1970) opposite superstar Rajesh Khanna, but that was not an easy role, nor was it easy to bag the film as she had previously declined his offer to do Aradhana (1969). Shaktida was not keen to cast her. It was his son Aseem, who was fond of the roles essayed by Asha Parekh that finally got her the film. It was a role of a lifetime, which also fetched her the Best Actress trophy at the Filmfare Awards. Other films like Pagla Kahin Ka, Bhai Bhai, Naya Raasta and Aan Milo Sajna followed. The same year she did her first Punjabi film Kankan De Ohle with Dharmendra. And she was the heroine in Raj Khosla’s Mera Gaon Mera Desh (1971), which was hugely appreciated and is often described as the precursor to Sholay because of its theme of a conflict with dacoits.

Nasir Hussain’s Caravan (1971) again was a big draw at the box office as its music by R.D. Burman was on the airwaves constantly. Nasir Hussain had once again wanted to cast her in Yaadon Ki Baaraat (1973) in a brief role opposite Dharmendra, which she politely declined.

Jawan Mohabbat and Nadaan too were released in the same year. Samadhi with Dharmendra came in 1972 followed by Rakhi Aur Haathkadi in which she was miscast opposite the much younger Vijay Arora.

Other films that she was seen in those years were Heera (1973), Anjaan Raahen (1974), Rani Aur Lalpari and Zakhmee (1975), Udhar Ka Sindoor (1976), Kulvadhu (Gujrathi) and Aadha Din Aadhi Raat (1977). 1978 again saw her emerging as a top-class performer in a rather abbreviated but significant role in Raj Khosla’s Main Tulsi Tere Aangan Ki along with Vijay Anand, Nutan, Vinod Khanna, Deb Mukherjee and Neeta Mehta.

Here she played the title role of Tulsi, a golden hearted mistress of an aristocrat. The role was initially offered to Raakhee Gulzar who found it to be brief and declined it. Asha accepted the role as Khosla had promised her that he would retain every scene narrated to her after which she accepted the role that won her more fans. Other films released towards the end of the decade were Prem Vivah and Bin Phere Hum Tere (1979) in which she portrayed strong character roles. 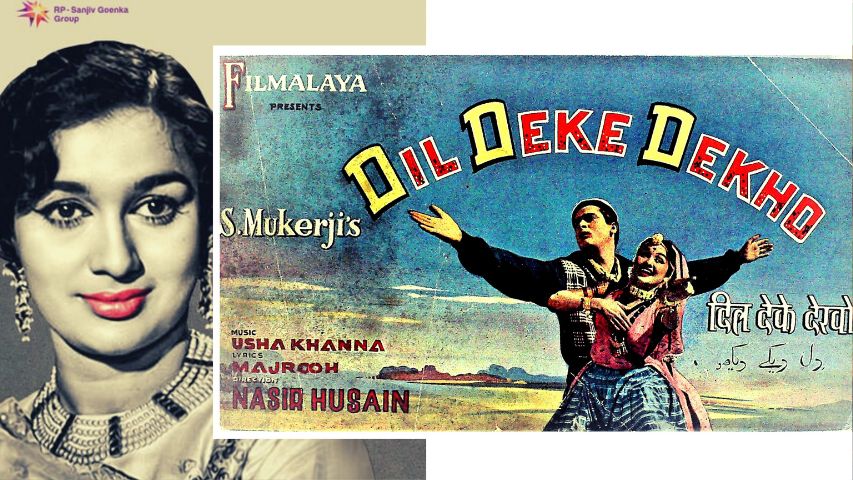 By the ‘80s, she had shifted her focus to strong character roles. The decade began with Sau Din Saas Ke (1980) based on the evil of the dowry system. She was cast as Sheila along with Ashok Kumar, Raj Babbar, Reena Roy and Lalita Pawar, and the film was a surprise hit at the ticket counters.

Her ‘80s repertoire also includes Ustaad, Badla Aur Balidan, Gunahgaar, Bulandi, Khel Muqaddar Ka, Kaalia, Pakhandi, Dharam Aur Qanoon and Manzil Manzil, Lava and Char Maharathi, Car Thief, Kismatwala, Preeti, Sagar Sangam, Main Tere Liye and Hamara Khandaan (1988). Hathyar, Batwara came in 1989 at the end of the decade. She had also moved on to directing T.V. serials. She was appointed as the Chairperson of the Film Censor Board, which kept her busy. Besides, there was the supervision of her Charitable Hospital for the underprivileged. 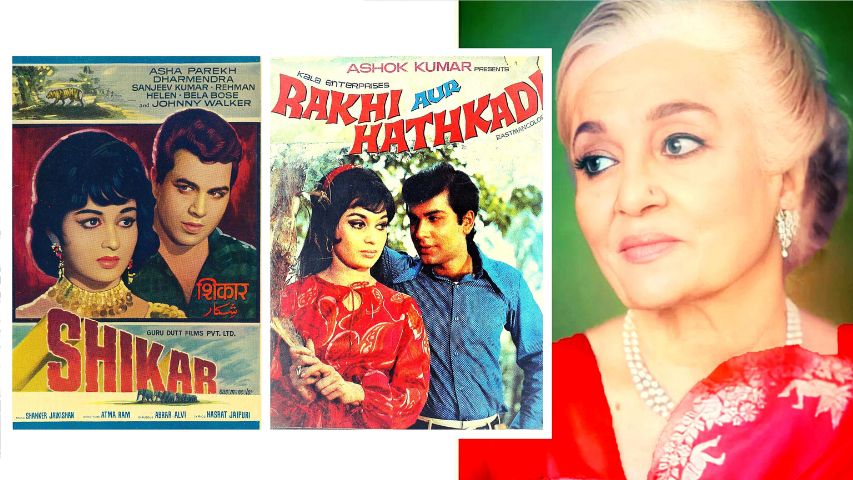 The ‘90s hardly saw her in any striking performances since action films were in, and socially relevant films in those times were out. Thus, she was seen once in a while -s in the films Professor Ki Padosan (1994) along with Sanjeev Kumar and Padmini Kolhapure, Raeeszaada (1990), Bhagyawan (1994), Ghar Ki Izzat (1994), Andolan (1995) and Sar Aankhon Par (1999).

Today, she enjoys herself as she believes in travelling the world over and appears as chief guest on TV and in reality shows. After all, her credo is, “The show must go on.”

K.K RAINA: The Act of Life!