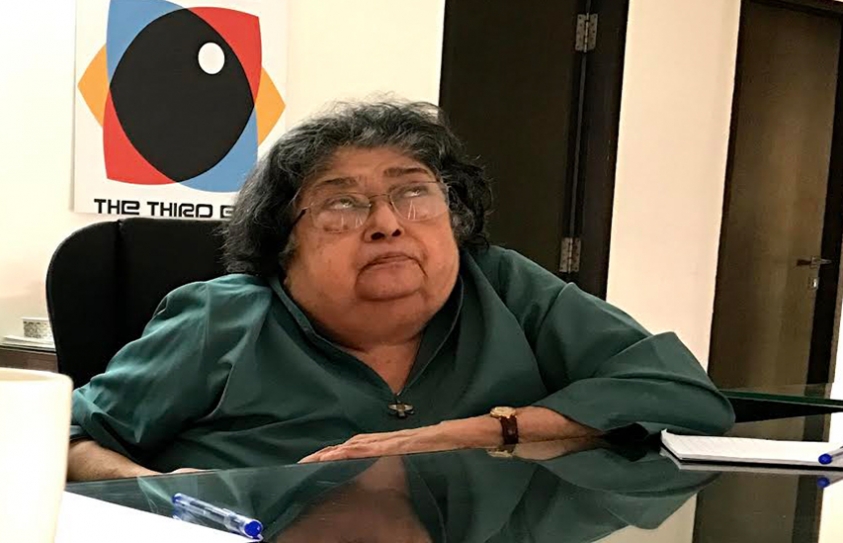 The last time I spoke to Piroj was two days before Nina Goel, her friend called me from Piroj’s mobile phone to inform me of her hospitalization and to tell me that Piroj would not be able to send in her weekly column for The Daily Eye (www.thedailyeye.info), as she wasn’t well; but that she would catch up with the one next week.

A week prior to that day when Nina made this call to me, I had phoned Piroj and asked her if she would like to accompany my ex-colleague Deepa Bhalerao and myself to the Press Club of Mumbai, as we were going there to attend a Press Conference.

Piroj, Deepa and myself had been planning to go to the Press Club together for months, because Piroj had been insistent that we should register The Daily Eye there, and we had planned that whichever was the day that Deepa and I were to travel into South Mumbai for a meeting, would be the day when we would fetch Piroj from her house and take her along with us. She also wanted us to have lunch with her there. She would tell me every time I spoke to her on the phone about our impending visit, that the food at the club was outstanding.

That day Piroj told me that she wasn’t feeling too well but then she made a couple of calls and by the time Deepa and I had reached the Press Club, the management was looking out for us, and we walked in there somewhat like celebrities. We picked up the forms after we were done with the Press Conference, and I called up Piroj on the way back to thank her. Piroj told me, “Vinta, I love your office and I want to come there soon,” to which I said to her that I would really like her to come over soon; and then she took a pause before she continued speaking. She said, “Vinta, where did you get that quiche from, the day that I had visited you last? Will you order that for me when I come to your office to see you?” I laughed and told her that of course I would do that. She was happy to hear that, and then we went on with our lives.

Piroj was a really good friend of mine, as she was to many others. My first tryst with her was when she called me up in late 1993, at the time I was writing this soap opera Tara, which went on to become a huge hit. I was in my mid twenties then and I was not at all prepared for a call from the editor of one of the most popular television magazines of those times, ‘TV And Video World’, especially when the call had come from the formidable Piroj Wadia who was also then the editor-in-chief of Cineblitz, one of the very popular film magazines.

I had never met Piroj before that day, only heard of her. She drawled on before I could grasp on the fact that she had actually called me, and she said to me, “Vinta Nanda, I want to do a cover story with you.”

I remember I was aghast, and I was speechless; a cover story with me? Can that really be true? I must’ve mumbled something, and then she said to me that she would like to meet me and before she could go any further, I told her that I would drop by at her office the very next day. I took her address and landed up at her office, which was at Nariman Point in Mumbai, the next afternoon. She met me with open arms and a warm hug. She told me that she loved Tara and she was really very happy to meet me.
We struck a friendship that day, because she could sense my disbelief and she spent a considerable part of the afternoon convincing me that the cover story that she wanted to do with me was really about to happen.

Thereafter, Piroj and I kept in touch all along. We both went through many ups and downs, but in my weakest moments when everybody I thought used to care for me, had abandoned me in those years between 2006 and 2012, Piroj made it a point to call me every single week and chat with me for hours.

Oh yes, she could really talk for hours, and I could happily listen to her for hours as well. When my entire life had fallen apart, she pushed and shoved me towards Children’s Film Society of India (CFSI), along with the efforts of Rinki Roy Bhattacharya, whom I hardly knew then, but who in a strange way had also connected with me; and together they ensured that I was included to the script reading and approval committee.

CFSI was then paying me Rs 400 per reading of each of the scripts and for putting my comments to them. When I was told of what I would get paid, I called up Piroj and Rinki both, and individually, to thank them. I also asked them if they really thought that roughly around Rs 800 a week would solve my problems? Both of them told me exactly the same thing. They said, “Oh yes, when it comes knocking on your door, it is useful, just take on this job and get involved.” Sure enough, the day that the CFSI man came to my doorstep one day, many weeks later, and handed me Rs 4000 in cash, it was the day on which I was completely broke and didn’t have enough money to take an auto rickshaw to the ad agency Creative land Asia, where I had been called in to meet with the Managing Director, Raj Kurup, for a prospective job; a meeting which I had obviously planned to skip.
I got the job of a consultant because I ended up going to the meeting that day and the consultancy paid me enough to cover my house rent and my food and transport; including the upkeep of my amazing big black dog, Charlie.
This was in 2010.

Piroj never failed to call me at least once a week, and she would encourage me and keep reaffirming to me that I was talented and that I should never give up. She was going through a bad time herself, with her health as well as with her finances. She would tell me that she needed a job, and when I would meet people who knew her, some as well as I did, and others who knew her even better than I did, and ask them on her behalf to help her find a job; I was told by most of the heartless, that I should not sympathize with her, because she had called this situation upon herself.
Yes, it is a very cruel world.

I would often hear some of the the very successful say that about another dear friend of mine who is suffering a lot too and whose name I won’t mention here; and I would think to myself, “When I go asking my friends to help me get some work so that I can survive the bad times that I’m in, do they also think the same about me?” But of course, I was right.
We live in a world, where you are never forgiven for your mistakes, more so after you have succeeded exponentially in your life prior to making them.

There is no bigger learning in life than when you walk up to your friends who wouldn’t have left your side for a moment at the time when you were doing well in your life; and now when you see them walk away from you, before you catch their eye.

However, life went on for all of us. I wasn’t able to keep up with reading scripts for CFSI because my job was demanding, but by 2012, things for me had picked up again and I got busy in establishing the Asian Centre for Entertainment Education (ACEE). The first person I called up and told of the work I was going to be doing, was Piroj Wadia.
She was thrilled when I told her that I was setting up a web news portal called The Daily Eye and that I would like her to write a weekly Television Review for it. When I asked her how much she would charge me, she told me that as long as what I paid her covered the cost of her medicines every month, she was fine. We agreed on that and Piroj Wadia wrote her weekly Television Review for The Daily Eye for the next three and a half years.

In the week of May 8th, Piroj called me to tell me that she needed a break for some days, because the laptop she was using had packed up, and that she was soon going to get a new one after which she would start writing again.

Then she called me again two weeks later to tell me that she had ordered a new laptop online and would resume writing her TV Reviews as soon as it was delivered. Thereafter, when I called her to ask her to accompany Deepa and me to the Press Club, she said, she wasn’t feeling well. And then soon after that, two days later, Nina Goel called me from Piroj’s phone and told me that Piroj had been hospitalized.

I had thought she would be back home and that she would be writing her next review on her new laptop, but then suddenly I got this message from one of her colleagues, Johnson Thomas, that Piroj was unconscious and that she was diagnosed with Septicemia. He wrote to me in the message which he sent me, that Piroj had been put on the ventilator and that there was nobody from her family who was there to take responsibility for her. He said that the doctors were waiting for someone to come around and give them the permission to pull her off the life support that she had been kept on.

I immediately put the message up on my Facebook page, and so many angels descended upon Piroj. Mahabanoo Mody Kotwal, Dolly Thakore, Moin Beg to name a few. All of them went to see her and kept us updated till this evening of 19th June 2017.
Mahabanoo informed us a few hours ago, that finally some of her relatives did show up, and that Piroj has finally found peace and gone to the better place.
Piroj has left all of us and she has gone to her new home, probably where her old laptop will be functioning, because in Gods heaven it is alone, where everything works. Adieu my friend Piroj Wadia.