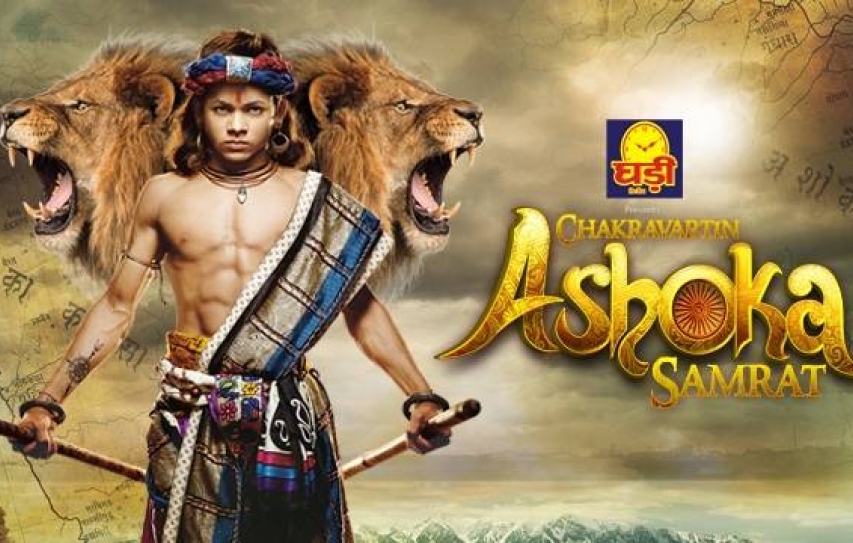 The Mauryan Emperor?Ashoka, who ruled most of the?Indian subcontinent?in the 3rd century BCE has held a fascination for Indian filmmakers.

In ?1980,? erstwhile filmmaker ?OP Ralhan announced his dream film project, Ashoka, The Great. He had meticulously? researched on the? Mauryan Emperor such that the walls of his South Bombay Row House were covered with a? painted story board; replicas of artefacts, armour? and arms? of the? period were strategically placed in the living area. He was living his dream. He had wanted to cast a? new face as Ashoka, by holding a contest, where contestants? sent in their photographs and details with Rs 100 as an entry fee. He had envisaged that part of the film?s finance would come from the contest. Unfortunately, it remained a pipe dream.

Next attempt was Santosh Sivan?s Asoka in 2001, produced by Shah Rukh Khan who also played the title role. Asoka was a history lesson with a few liberties and overwhelmed ?by? the glamour of Bollywood,. It did middling? business, soon a director?s cut was? telecast as a miniseries.

Now Colors has taken on? the onus of recreating the life and times of India?s most significant ruler Emperor Ashoka. Scripted? by author Ashok Banker, who is making his comeback to television scripting ?after nearly two decades,?Chakravartin Ashoka Samrat?is the first time that the king?s story will be narrated on television.Thetwo episode narration in Shyam Bengal?s Bharat Ek Khoj not with standing. The show is? produced by Contiloe Entertainment, a company which is no stranger to making historicals? they currently ?have? Bharat Ka Veer Putra ? Maharana Pratap on Sony. They have earlier presented Veer Shivaji on Colors TV and Jhansi KI Rani on Zee TV.

The historical retelling of this era of Mauryan history ?will showcase the life and times of Ashoka -- from his ?boyhood to his rise to power to his penance after the blood-bath in the battle of Kalinga that made him give up war to embrace Buddhism.

At present, the focus is ?on young Ashoka, who is Bindusara?s son by Dharma, the daughter of a Brahmin. His true antecedents are revealed much later to both father and son. In the meanwhile, under the patronage of Bindusara, ?he is ?being mentored by Chanakya, who sees the potential in the boy to rule the Mauryan kingdom, and knows of his parentage. The dowager queen? Helena is conniving to overthrow her step-son Bindusara from the throne of Magadh, in favour of ?her own son Justin. In the meanwhile, Bindusara?s queens -- Charumitra and Noor? want their respective sons ? Sushim and Siyamak -- to take the throne of Magadh.

?Night after night, viewers are treated to court intrigues, power play, mysterious killings and alliances amidst the splendor of Mauryan architecture.? The Sushim, Bindusara?s eldest son shows his animosity towards Ashoka, who gets a lot of attention from Bindusara. This? depiction sets the tone for what happens latterly.

Considering the visual feast of plush interiors and stately palaces and dwellings, with a touch of Greek culture,? it is obvious that no expense has been spared in recreating a golden age in India?s history.

Stepping into the role of young Ashoka,? is the? 14-year-old Siddharth Nigam, fresh? out of Mahakumbh.? The young actor has been ?showcasinghis dexterity withstunts, this was amply seen in Mahakumbh where he plays the Rudra. But as Ashoka he has also proved himself in dramatic scenes opposite stalwarts like Sameer Adhikari who plays Bindusara and Manoj Joshi who plays Chanakya. In fact it?s opposite the latter, that the ?young actor has ?showcased his dramatic ability with ease.

The period of the Guptas and the Mauryas are the ?richest periods where India was not only strong, and united, but also very powerful. Nobody dared to conquer ?her not even the Greeks. Through Chakravartin Ashoka Samratviewers? get a glimpse of the glorious might of the Indian? emperors ? Chandragupta Maurya and his lineage .

Very little is known about Ashoka?s early days and his rise to power. The serial traces the emperor?s journey right upto to the Kalinga war.How he became the emperor in spite of not being the elder son of Emperor Bindusara and his struggle against his own brothers.

The casting has been pitch ?perfect. Sameer Adhikari as Bindusara is a master of epics, he comes to this series after Buddha and Mahabharat. Manoj Joshi, who has played Chanakya on stage for over 24 years, is the perfect fit to essay? the? role of? Indian history?s seminal ?kingmaker and statesman. None of the young actors today could have played the young Ashoka as? Siddharth Nigam is doing. Earlier another young actor Paras Arora wowed the viewers as the young Shivaji in Veer Shivaji. The others in the cast are all accomplished actors like Tej Sapru, Sumit Kaul, Prinal Oberoi and others. The pint sized actor? Md Faizan who plays Siyamak is one to watch.