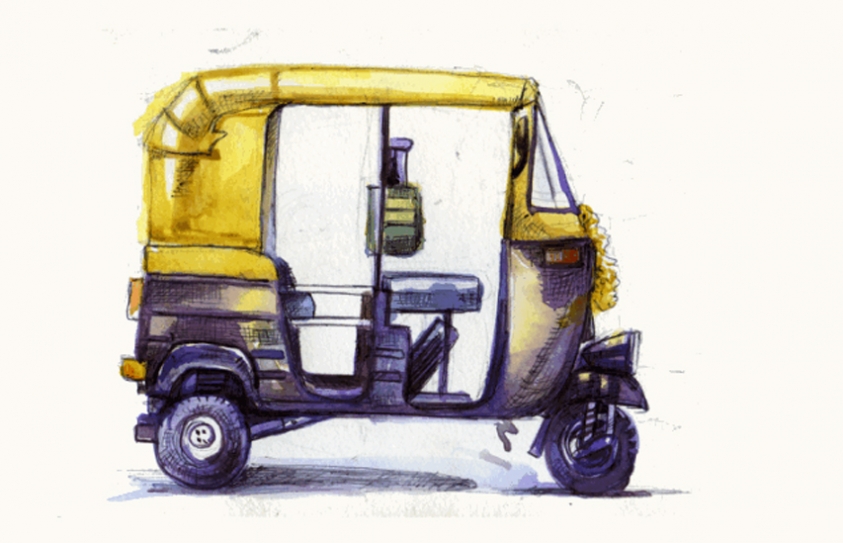 ‘Everyone you meet has something to teach you’, goes a saying.

Travelling multiple modes of transport on a regular basis allows for sharing space with a variety of people. Local trains, metro trains and auto rickshaws make for an interesting melange of populace to cross paths with. There is a distinct difference between the local train traveller and a metro rider, but they both allow for silent nonparticipant observation in the course of which many truths tend to reveal themselves wordlessly.

The surplus of words, however, comes from a one-on-one interaction. The auto rickshaw ride offers itself as a readymade opportunity to know more about the perspectives and opinions of a person who forms an integral part of the urban landscape of Mumbai. The three-wheeler is the vehicle of choice for most in the city. It is preferred by the busy office goer, the rushed housewife and the college student, who can sometimes afford to pay a price for reaching a destination just a little bit faster.

My daily four kilometre commute presents an opportunity to interact with the driver of the auto-rickshaw that graciously agrees to take me on a certain route (finding transport upon which has lately become tedium of sorts).

The noisy, and pothole-filled journey takes me past a crowded fish market laced with a roadside vegetable market, a few mutton shops, many overflowing garbage bins, a big road crossing, two overhead bridges, a string of ethnic clothes shops, some flower shops, a roadside plastic utilities market and some narrow lanes where only one vehicle the size of a small car can pass through at a time.

The nature of the journey is such that one often feels the need to utter a few sentences or at least a few words (not always the kindest ones!), so conversations are imminent.

Among the many interactions that i have had, some remain in the mind, weeks or even months later.

One rainy Friday, a kindly looking man asked me if i were from U.P. He had perhaps heard my phone conversation in Hindi with my daughter a while ago. I mumbled a yes, trying to keep it short, but it was just the pointer he required. He told me he had three daughters who lived in a village in central U.P with his wife and parents, and how he was facing the discomforting prospects of finding a groom for the eldest one. He spoke with pride about how they were well educated and that the eldest one had completed a MBA from Lucknow. He lamented the fact that instead of wanting to meet the girl who would bring so much value to the family, the prospective groom’s family was more interested in a big dowry. He said he felt worried about subjecting his intelligent and well informed daughters to a life that did not offer much scope for their growth. He debated whether a person who asked for dowry would value intangibles like a person’s intrinsic worth.

Another day, another driver began the conversation by asking if i had travelled abroad. This, as it turned out was just an excuse to speak further. He proceeded to tell me how he had travelled to the Middle East to make some money as a driver. He remembered the good roads, the better pay and the respect he got from the passengers. Then in as sombre a voice that a loud (so as to be heard over the din of the traffic) conversation allowed for, he shared the reason why he was forced to return. He had lost his wife to an unspecified illness. He had to return to be able to look after his four young sons. He spoke movingly about how he never gave a thought to the value of a woman’s work in the house and how painful it was to manage a parallel workload.

On a third occasion, many days later, i got the opportunity to converse with a driver who seemed quite senior. He said he was past 65 years of age and found it hard to drive in streets where there was a lot of unnecessary speeding and overtaking. He went on to pontificate on the meaning of life and the meaninglessness of the constant rush hour that signifies Mumbai. He said he had lost his wife of 45 years a few months ago, and that had made him feel empty and directionless. He added that he had made a decision to spend more time with his children and grandchildren as he now felt that he had not made a conscious effort to interact much with them. He said that he had never once told his wife about how much she had supported him on the difficult journey of life as he had felt that she would be around to take care of him always.

These conversations made me marvel at how profound words can sometimes be uttered in the most unexpected of places and contexts. The candid conversations revealed the turmoil of a mind that does not often have the opportunity to express its deepest concerns.

They also brought forth the underlying issue of women’s situation in a section of working class urban India. The fate of a young educated woman, whose father is careful enough to facilitate her education, but not progressive enough to contemplate anything other than an arranged marriage for her; the married housewife’s burden of bearing children and collapsing under the responsibility of housework and childcare, the way in which an elderly woman is looked upon- as a permanent caretaker- useful till her last breath with no thought given to her needs as a senior citizen and the problems that come with ageing.

There is a need to hear more, to learn more, to contemplate more on the real everyday nature of problems surfacing from a changing reality. The landscape of gender and its related concerns needs a discourse with those who are not aware of them as issues. There is also perhaps the need to dialogue with every possible person who easily and unselfconsciously shares a snippet of a personal dilemma, a tragedy or a wistful realisation. There is a need to reach out and articulate in a voice that says, let us talk, because your issues and concerns are also in some way universal issues and everyone’s concerns…

BENGALI MAESTROS ON THE FAMOUS 4!

MUJIB: The Making Of A Nation