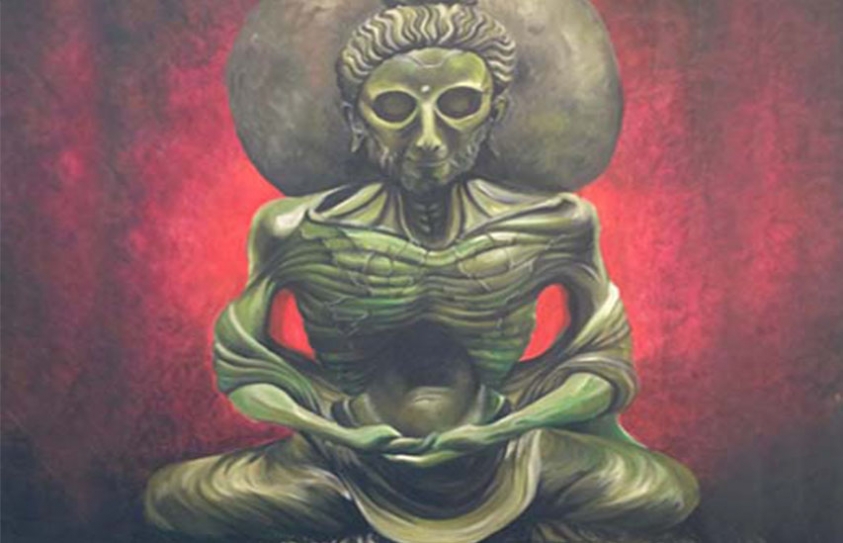 Environment, Development And The Paradox Of Progress

The wisdom of ancients was cast in proverbial stone when the Atharva Veda extolled believers to worship the environment, and consequently immortalized the message of preserving nature.All elements of flora and fauna were held in reverential esteem , even forming part of ritualistic practice. This ensured banana plantation as regular provider of food and leaf. Cows and substances that followed were consumed as food and medicine. The message was clear. If the sustaining elements vanished, the consumers would follow the extinction. Hymns were devoted to such preservation. Centuries buried the wisdom under thick dust that encrusted the gospel, and generations followed in reckless disregard, blinded by development without a thought to tangible sustainability.

Living memory does not have to wander afar to recollect local and overseas disasters that shook the human race, only to keep surfacing time and again. Like the head of Greek Medusa who turned all to stone until a mirror reflected her own image and turned her to one. The subject here reflects that reality. Begging the query, how many must turn to stone before a warrior Perseus holds the mirror? From Chernobyl to Fukushima, from Union Carbide to local mangroves, there is much that this disastrous journey has traversed. The behemoth of environmental exploitation continues to straddle many decades. Global warming is only one face of the apparent consequence that imperils ‘The lonely planet’. An anachronism for teeming billions that only know the art of extraction without rejuvenation. Resources of planet earth continue to nurture unforgiving masses until unforeseen, though not unforeseeable, consequences wreak havoc without wisdom.

Satellite imagery shows rampant and blatant exploitation of natural resources and ugly footprints of “development”. Few discerning eyes look for calamitous results that reduce green covers to vast deserts of sand and stone. Ozone continues to deplete and cancer proliferates. In the face of ‘development’ worldwide, the current scenario raises a pertinent question of tangible sustainability. Saving the iconic Taj Mahal from a commercial corridor just in time could not rescue the monument from yellowed exteriors facing brunt of pollution. Until Lord Curzon’s chandelier crashed as a reminder to put our act together. The Pyramids of Egypt , invaded by every commercial establishment in the vicinity, could scarcely escape ‘development’ for tourism. Commercial aggrandizement is the sole mantra propelling advancement without holistic growth. In the fertile lands of Punjab and Haryana, the rice and grain bowls of India, ‘Change of user’ for land is readily granted to landowners by accommodating officials sharing spoils of windfalls. Green fields on arable land have given way to the fertile hectares colonized and industrialized by hurried builders and businessmen. Large industrial behemoths, educational institutes and residential enclaves continue to invade lands that fed the country for generations. The ensuing ‘compensations’ to landowners dissipate in a single generation, giving rise to crime and vagrancy of once well-to-do families. Why such concrete constructions could not be planned in arid lands without impinging on rich cultivable farmlands raises the question yet again on tangible sustainability of development.

The times now call for critical impact assessment of all actions in the name of ‘development’. The domino effect of consequences continues to flow like an already polluted river, containing more and more untreated effluents that pollute its purity. As populations thrive on global maps, internecine and international conflict continue to feed proliferating denudations of forests and natural sources of water. The larger machinations of plans, aided by superior technology, continue to perpetuate disasters that emerge with time. Closer home, in hushed tones, are mentioned course of canals constructed to water selectively the industrial interests of politicians rather than address needs of impoverished farmers destroyed by uncertain monsoon. Parched earth, rendered arid by vagaries of rains, multiplies farmer suicides. Numbers added to statistics are rattled with poker faces in State Assembly, empty promises following allegations against earlier parties in power. For miles beneath Mumbai’s elevated corridors of fancy transport, stand archaic bullock carts ferrying desperate peasantry to town in search of life and livelihood. The bullocks finally end drought with access to city water. Then remain here to die. A collage of hurried lives follows peasant suicide headlines each day, the news screaming in silence from ‘Raddi’ heaps of scrap merchants. The elevated transport corridors, built at extensive costs, serve less than 43% people and remain under utilized upto half capacity.

Derelict irrigation canals , abandoned and unfinished, dot the promised lands in Maharashtra. After Rs.70,000 crore expenditure by State exchequer, only the babus and Ministers are smiling. Not a drop of water has reached the killing fields taking toll on impoverished farmers. More pyres light the skies as a PIL in Bombay High Court continues to seek answers from evasive, laggard officials. No one is clearly accountable for development and sustainability. In metros in India and abroad, a futile attempt at tapping solar power stands evident. The glass clad facades of tall highrises, ubiquitous in most city centres, are failed architectural experiments. Alienated from environmental scrutiny. In Central London, the glare from glass melts tyres of parked vehicles in the parking area across. In Mumbai, the glass cladding traps people and smoke in fire emergencies, sealing escape and fate. Fire hazards completely escaped the attention of planners, as firemen battled in smoke filled corridors At the Churchgate station building, the glass façade is open for fresh air when air conditioning bills mounted. Now disallowed, the sustainability of such development comes into the fore again.

Development worldwide has arrived at a colossal cost to environment. Ecology, marine life, atmosphere, global warming, depletion of ozone layer, all are mere tips of the iceberg. The Chernobyl disaster continues to haunt survivors visiting unmarked graves of dear ones. As does the Fukushima nuclear plant disaster in Japan that has claimed many lives under discreet , steely silence. Closer home, travails from Union Carbide tragedy continue. Maimed survivors clamour for evasive compensation, receiving mere tokens. New plants sprout on newly acquired land vested from farmers. Mayawati Government acquired many such tracts only to pass them on to private builders. Yet again, arable land turned arid as concrete structures destroyed green, fertile covers.

The tide of devastation must halt. It is easier to study human disasters from a perspective of sustainability perspectives. It is much harder to survive the disaster that follows, on scales that are large and permanent. In India, the Environment Protection Act is a strong legislation that draws Rules governing projects. Although the Act stands like a sentinel, it is the illegal activities that need an iron hand to quell. Sand dredging, illegal iron ore mining, coal scam, sandalwood smuggling by the tonnage, discreet poaching in national parks, sale of tiger skins and elephant tusks from wildlife and similar brazen acts have been committed despite the laws. The culprits must be brought to book to ensure perpetrators do not continue to violate environment with impunity. The provisions for protection of animals and environment in criminal law are hardly invoked. The National Green Tribunal, newly set up, operates with more news of insufficient infrastructure than strongly armed enforceability. Surely ministries are empowered to come down on violators with a firm hand. The ‘Night watch’ arm can be initiated that spots violations under gaze of satellite images and local area administration. Officials must act at the outset rather than meet a fait accompli, once towering structures have been erected and occupied. When every inch of the land mass is documented in revenue and city records, the administration must be held responsible for violations under their jurisdiction.

As development marches into newer times, mute spectators are not the manner of silent condemnation of malpractices. Activists must be protected who uphold protection of environment and conservation of natural resources saving them from unbridled exploitation. The whistle blowers Act needs to be stringently pursued. Rice and wheat can become dust. But dust cannot become grain. The sooner the planners realize the consequent disaster, the more tangible shall become sustainability of development.