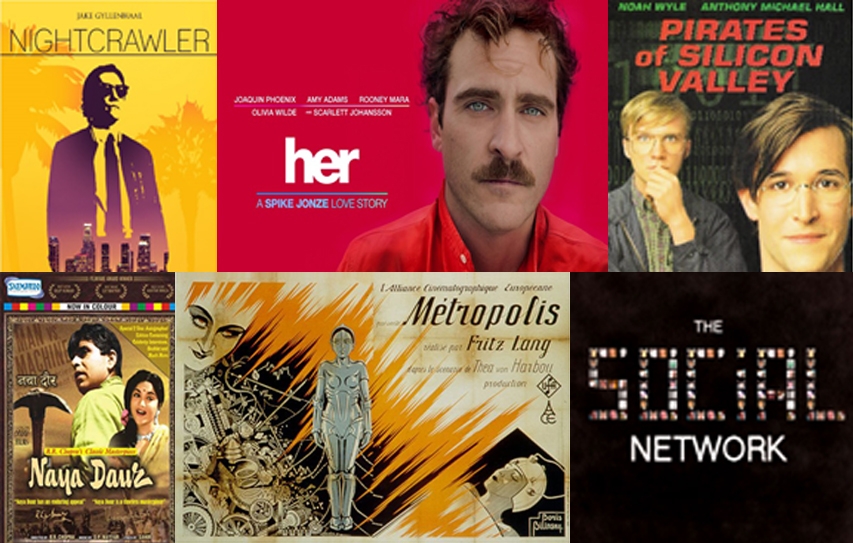 Like the ever-present air, we live and breathe technology. Despite our excessive dependence on the array of media at our disposal, we take our options for granted. Nevertheless, advancements over a variety of fields transcend boundaries and change the way we perceive the world around us.
From the revolutionary inventions of yore to the flying leaps in the tech world today, we have set milestones in societal evolution and have also been witness to cinematic interpretations of the world reshaped by these developments. This month’s column lists the Top 5 films on the storylines that emphasise the themes, whether real, fictional or metaphorical.

1.Metropolis (1927, Fritz Lang): Set in 2026, this silent expressionist science-fiction showcases the dystopian Metropolis, made airtight by class hierarchies. The wealthy conduct their business from towering skyscrapers while the workers toil like ants on the ground below and never the twain do meet. That is, until a teacher Maria (Brigitte Helm) catches the eye of Freder (Gustav Fröhlich), scion to the Frederson Empire. He follows her trail down to the workers’ city, only to be appalled by their working conditions. The resolution of the class struggle is possible only when “the heart” (Freder) mediates between “the brain” (his father) and “the hands” (the workers).

Metropolis may seem like a viewing meant for film students, but it is a venture ahead of its time with its attention to detail in cityscape and the choreographed drudgery of the labourers’ existence. Given the present fondness of studios for post/apocalyptic settings, Metropolis was a pioneering masterpiece all those decades ago. Incidentally, it is also the first film to depict a robot – the Maschinenmensch remains one of the most iconic androids in cinematic history.

2.Naya Daur (1957, B.R. Chopra): Industrialisation dawns in post-independent India, adding to the conveniences of the privileged few whilst taking away the livelihood of many. Shankar’s (Dilip Kumar) village is no different

Many earn their wages by plying horse carts, a subsistence that is threatened when the landlord’s son (Jeevan) introduces a bus service in town. This leads to a face-off between man and machine where Shankar must prove that his cart can move as fast if not faster than the dreaded buses, culminating in a thrilling climactic race, where the hero’s victory is hard-fought and well-deserved.

3.The Social Network (2010, David Fincher), Pirates of Silicon Valley (1999, Martyn Burke): Facebook and Apple products have found a way to stay ahead and remain relevant. While the journeys of Mark Zuckerberg and Steve Jobs may have varying trajectories, the two tech rebels did break-out in their own time and defined the way we connect with the world today.

The Social Network is a slick, dramatised take on Zuckerberg navigating through an unsavoury lawsuit in order to establish one of the most influential social media platforms in the world. Despite clashing versions of ‘the real story’, the film has repeat value under David Fincher’s able direction.

Pirates of the Silicon Valley is based on the book Fire in the Valley: The Making of The Personal Computer and charts Steve Jobs’ journey from his U.C. Berkeley days (“They're not revolutionaries, we are”) to his eventual international fame. Pirates... had the stamp of approval from the subject himself.

4.Her (2013, Spike Jonze): A plaintive look at urban isolation, Her peeks at the bleak future coming our way at a time when communication devices get more advanced and human interactions get less nuanced.

Joaquin Phoenix plays Theodore, a lonely man who writes love letters on behalf of those who cannot express themselves. For all his soulful outpourings on digital greeting cards, he finds solace with Samantha (Scarlett Johansson), an A.I. operating system. Turns out, he is not the only one falling in love with her. Few films can capture the lives of such quiet desperation without morphing into mawkish drama.

5.Night crawler (2014, Dan Gilroy): Media’s cacophony is its own noise pollution of sorts. When a channel manages to outshout the white noise above the others, it gets a boost in ratings. The television audience watches impassively, desensitised to the gore and accustomed to the faux activism in human interest stories. Jake Gyllenhaal plays Lou Bloom with aplomb.

He is the polite sociopath (Dr. Lecter would approve) who shifts career paths from scavenging to cruising across the streets of LA for crime scenes. Lou quickly descends down a path of racing for the money shot of victims (either of accidents or violent crimes). His tendencies are fuelled by hardened TV station head Nina Romina (Rene Russo), who wants all the footage she can get to reverse the sagging arc of her TRPs.

The five films on this list round up the social and media spheres in our daily existence, the older ones rendered even more timeless by their appeal to this day. Technology may progress, but the human thread of greed, ambition and even violence remain unchanged.
Until next month with another topic, this columnist wishes a good weekend for you (and for herself).