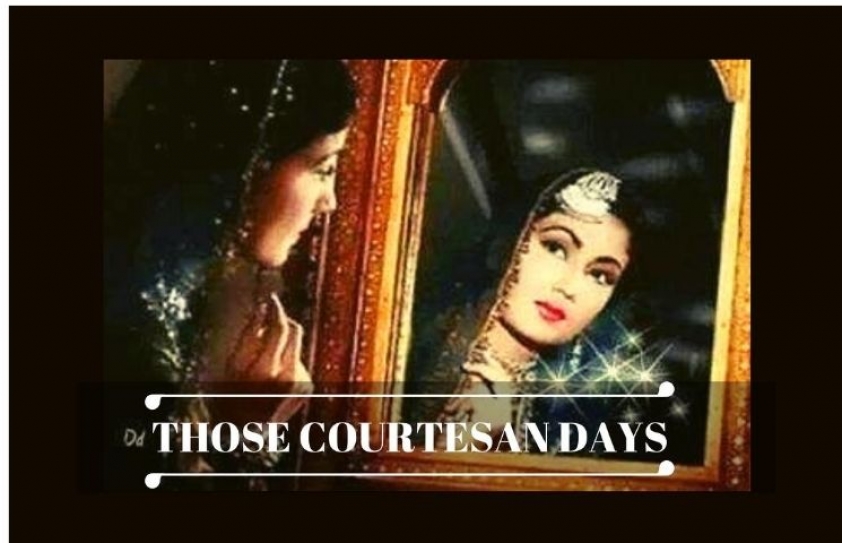 Film historian Dhruv Somani, writes on the near-extinct genre of Bollywood films, which took you into the kothas and durbars of tawaifs.

The courtesan culture was once a socially concerned theme of our movies. Today, as the tradition of courtesans (quaintly called the nautch girl, during the British Raj) is near extinct, so are the films focusing on their artistry as the dance form, and their trials and tribulations in being accepted within the societal mainstream? At most, their status could always be the ‘other woman’.

Right from the silent era, Hindi cinema would return frequently to the kotha and detail their love stories, which oftentimes led to unrequited endings and rarely, to an optimistic finale.

Nalini Jaywant had scored the Best Actress Filmfare trophy for her nuanced role as a wily but ultimately noble-hearted courtesan in Kala Pani. Saira Banu played a woman with ghungroos on her feet in Paise Ki Gudiya and Hema Malini in Sharafat Chhod di Main Ne, Jaaneman, Yudh, Ramkali and Mehbooba, and Leena Chandavarkar in Mehboob ki Mehndi. Nanda was a total misfit in Nartaki though. Mumtaz in Khilona, Reena Roy in Rocky, Smita Patil in Ghungroo and Angaaray, Tabu in Jeet, Rani Mukerji in Mangal Panday and Sushmita Sen as Naima Begum in Kisna were way more convincing.

The courtesans gave way with time to beer bar dancers and when that was banned, to what are called escort services.  For this Sunday, here’s a selection of the heroines who portrayed the courtesan with conviction and had total impact in our movies: 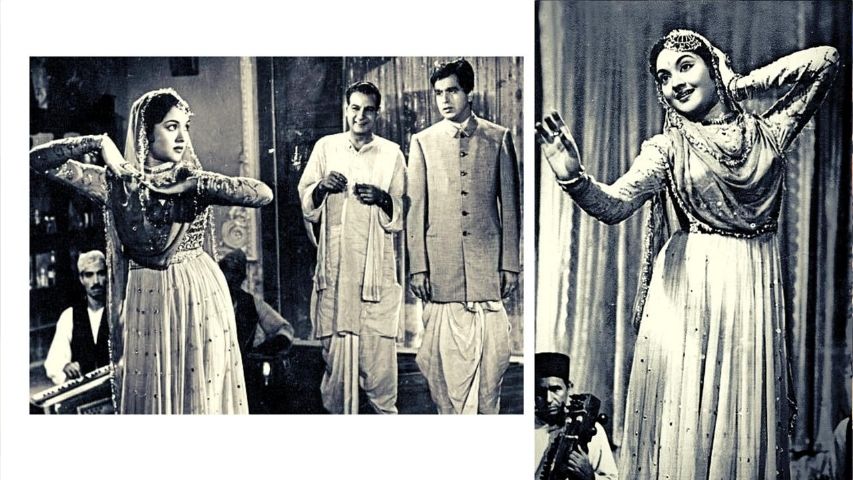 Adapted from Saratchandra Chatterjee’s classic novel, Vyjayanthimala’s powerful portrayal as Chandramukhi, the sympathetic kotha woman to the alcoholic Devdas, played by Dilip Kumar, in the version directed by Bimal Roy. She refused to accept the Filmfare trophy of the Best Supporting Actress since she felt her role was on par with Suchitra Sen’s who played Paro.

Be it K.L. Saigal, Dilip Kumar, Shah Rukh Khan or Abhay Deol who played different avatars of Devdas, Chandramukhi were central to the tragic story. Though P.C. Barua’s and Bimal Roy’s versions didn’t exactly storm the box office, it was Sanjay Leela Bhansali’s grandiose version of Devdas and Anurag Kashyap’s funky take in Dev D that clicked with the audiences.

Vyjayanthimala replayed the quintessential courtesan in B. R. Chopra’s Sadhana, and in F.C. Mehra’s Amrapali. Her expertise in classical dance forms was an added advantage in such roles, which she performed with pitch-perfection. 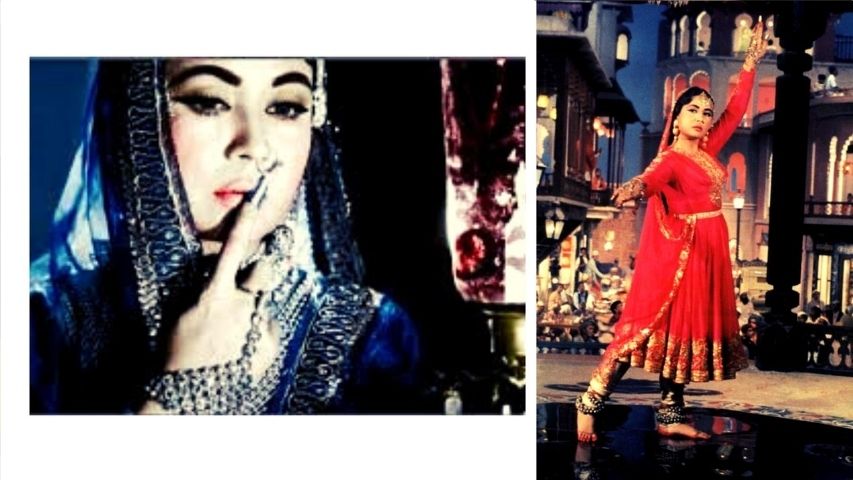 She was director Kidar Sharma’s Chitralekha, based on the novel by Bhagwati Charan Verma about King Chandragupta Maurya’s love for a  strong-willed courtesan. In the Bimal Roy-produced Benazir and Ved Madan’s Gazal, she was the kotha girl who dreamt of marrying her suitor.

Unarguably, Kamal Amrohi’s Pakeezah, is one of her estimable career’s-best (alongside Saheb Biwi aur Gulam). Who can forget the look in her eyes while singing Chalte Chalte Yunhi Koi Mil Gaya Tha when the train whistles through the stillness of the dark night?  The long-delayed in the making masterpiece, it is claimed by some, became a super-hit only when she passed away weeks after attending its premiere. Set in the 1920s, it narrates the journey of a tawaif and her longing to be respected in society. The elaborate sets, the unforgettable music score and Meena Kumari’s performance are to die for. 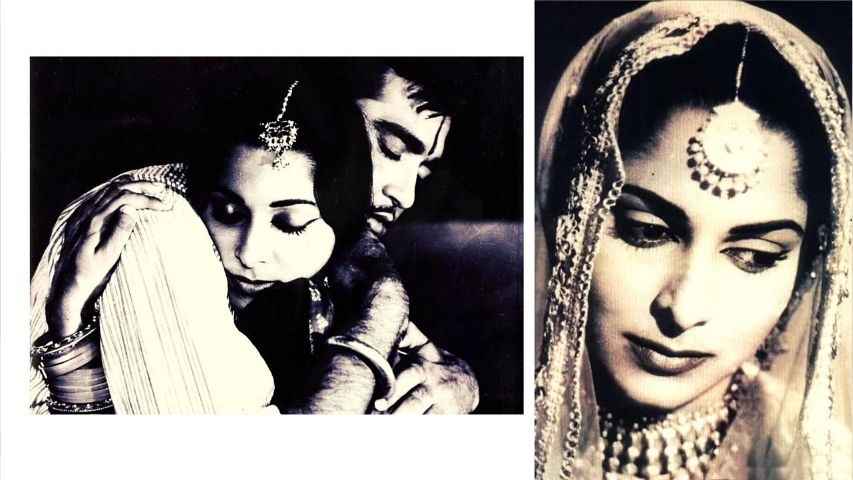 She was the courtesan who won the heart of a dreaded dacoit enacted by Sunil Dutt in Mujhe Jeene Do. During the song sequence Raat Bhi Hai Kuch Bheegi Bheegi, she employed her dancing skills with tremendous grace. And in Darpan, co-starring Sunil Dutt, she was a school teacher’s wife whose past is filled with deep and dark secrets of the turbulent life she had led before, albeit unwillingly. 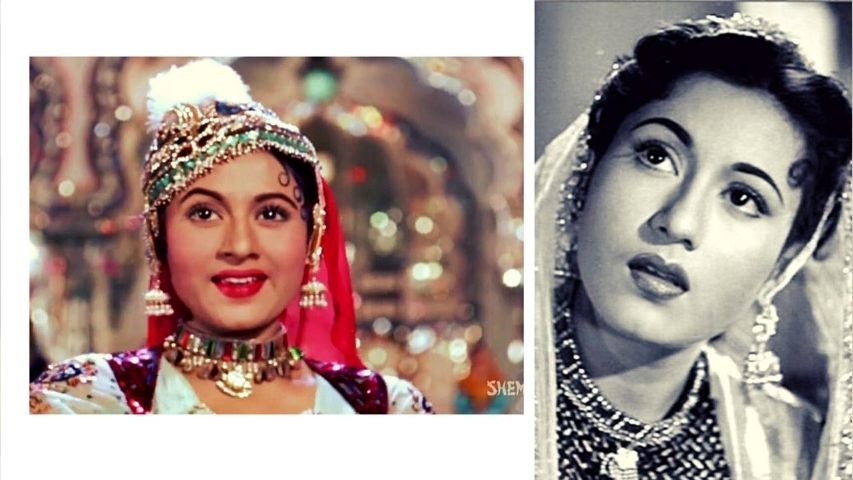 The Venus of India, as she is justifiably called, was ethereally beautiful in K. Asif’s Mughal-e-Azam, rated by some critics as one of the best Hindi films ever made. The dazzling Sheesh Mahal, where she danced to the tune of Pyaar Kiya Toh Darna Kya, has been unmatched to date. The love story of Prince Salim and Anarkali opposed formidably by Emperor Akbar are the stuff legendary films are made of. And it works far better in its original black-and-white format (with two color sequences) than it does in its updated completely colorized version. Bina Rai had also played the eponymous part in Nandlal Jaswantlal’s Anarkali earlier. 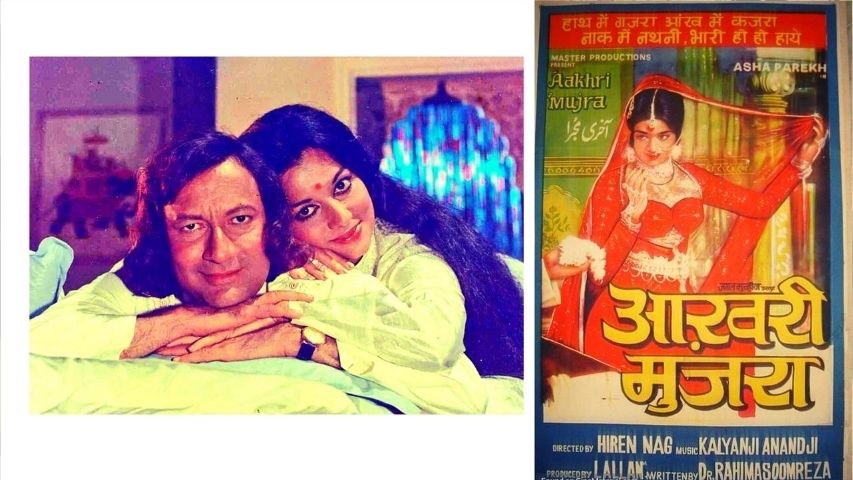 Asha Parekh’s performance as the other woman, in Raj Khosla’s Main Tulsi Tere Aangan Ki, was moving and credible. Her role as Tulsi who sacrifices her life for her paramour’s wife Samyukta, played by Nutan, tugged at the heartstrings.  A trained dancer, she also played the nautch girl in Aakhri Mujra, and Bin Phere Hum Tere. 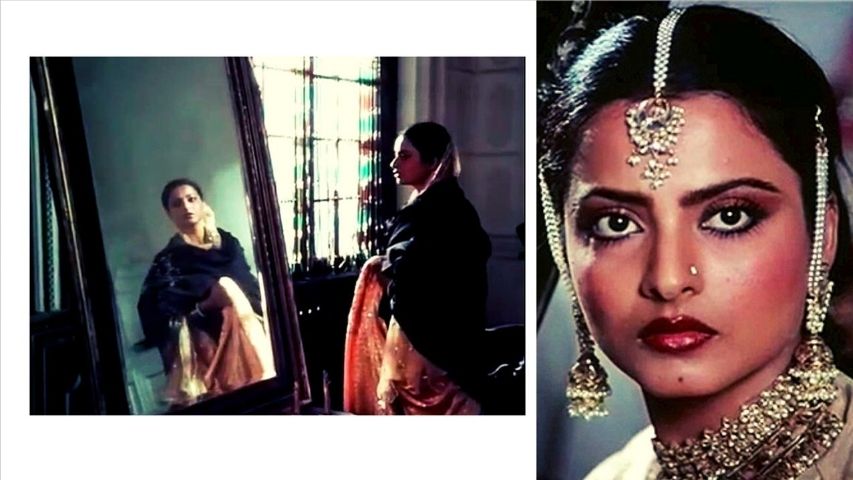 Directed by Prakash Mehra, Muqaddar ka Sikandar had a sub-plot, which involved Zohra, the courtesan with the proverbial heart of gold. Amitabh Bachchan and Rekha consolidated their status as a widely adored hit pair.  Rekha’s dance number Salaam-e-Ishq, became so popular that it was performed at real-life kothas, be in Bombay, Delhi or Lucknow. The character of Zohra, with different shades, was replayed by her in Daasi, Maati Maange Khoon, Ghungroo Ki Awaaz, Jaal, Deedaar-e-Yaar, Prem Tapasya, Khoon Aur Paani, Kasam Suhaag Ki, Ameeri Gareebi and Yaatra to name a few.

But undoubtedly Muzaffar Ali’s Umrao Jaan, was her class act. She added her trademark allure and mystique to her dance movements and is believed to have worn her own collection of jewelry for the songs. Khayyam’s music score was wonderfully old-worldly and melodious. Rekha won an armful of trophies including the Best Actress National Award.

Director J.P. Dutta subsequently recreated Umrao Jaan with Aishwarya Rai and Abhishek Bachchan but it appealed neither to the critics or the masses. 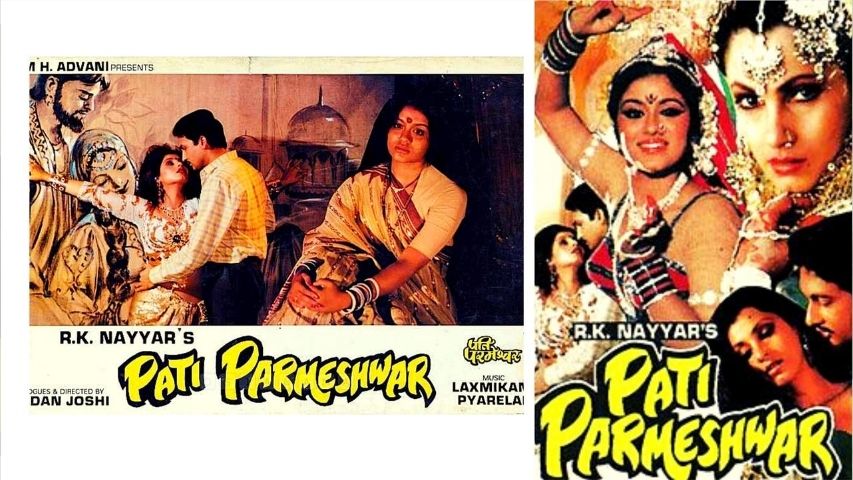 She was the danseuse Tara in Pati Parmeshwar, produced by R.K. Nayyar and directed by his assistant Madan Joshi. Shekhar Suman and Sudha Chandran played the husband and wife in this triangular drama. Bristling with regressive elements, it was cleared by the censors after two years with several cuts.  It was a colossal flop. Dimple Kapadia played the courtesan in Gunahon Ka Fasila and Ranbhoomi, which are best dismissed from the memory files. 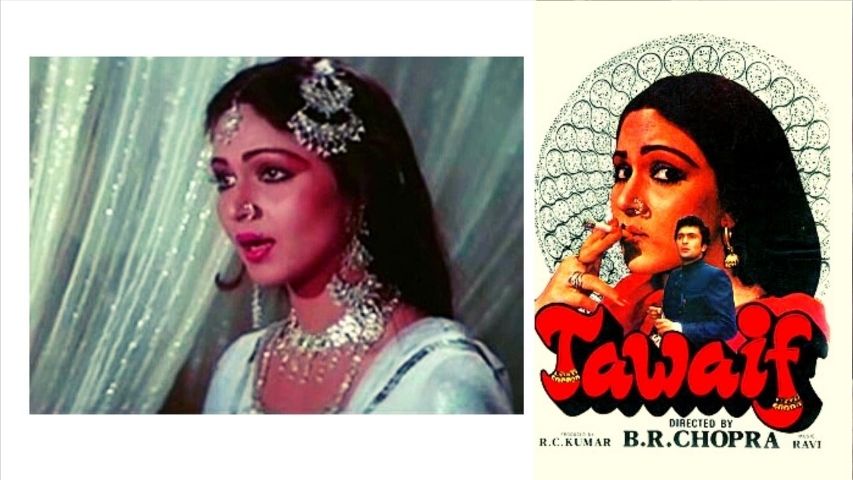 She enacted the title role of B.R. Chopra’s Tawaif, meant to convey a social message that women can be independent on escaping from their exploitative environment. Rati Agnihiotri as Sultana, accidentally takes refuge in the house of a kind man Dawood Mohammad Ali Khan and hopes to escape her past. The acting crew included Rishi Kapoor, Deepak Parashar, Poonam Dhillon, Ashok Kumar, Kadar Khan and Sushma Seth. A commercial success, Rati quit acting for a while and got married after this film.

The blue-eyed songstress-actress played a courtesan in Pati Patni Aur Tawaif, directed by Raj Kumar Kohli. It was a remake of Pakistan’s film Bazar-e-Husn, based on the novel by Premchand. She had reprised her role from this Pakistani film along with Mithun Chakraborty, Farah and Sumeet Saigal. It clicked at the box office. She was, then, seen in similar roles in the film Salma, with Raj Babbar,  Shoma Anand and Farouque Shaikh and in Mahaveera, with  Raaj Kumar, which however sank like the Titanic. 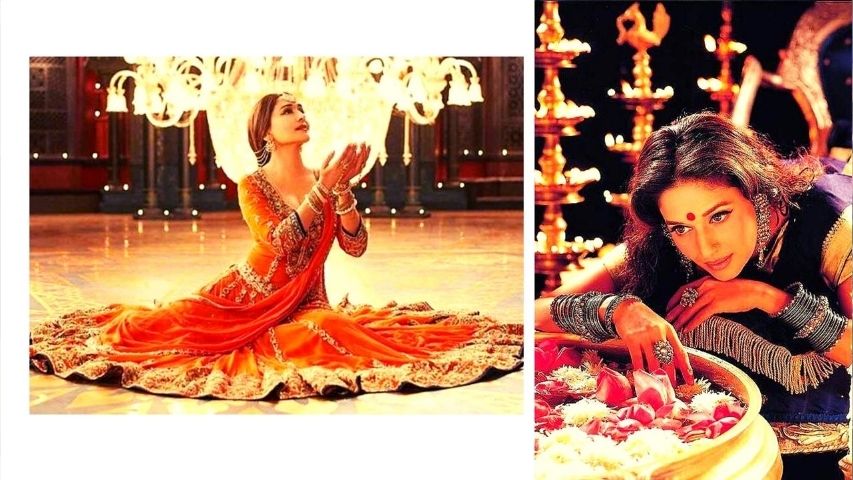 She shone a light as Chandramukhi in Sanjay Leela Bhansali’s remake of Devdas. The drunk lovelorn Devdas, incarnated by Shah Rukh Khan lamenting and crying on Chandramukhi’s shoulders was déjà vu but the audiences gave the ostentatious production a thumbs up. Madhuri Dixit’s dances and her confrontation scenes with Aishwarya Rai and Milind Gunaji were the film’s highlights. Every costume she adorned looked tailor-made for her character. She was seen as a poet-dancer in the film Dedh Ishqiya, and more lately, as Bahar Begum in the multi-starrer Kalank, where she however seemed to be ill-at-ease.