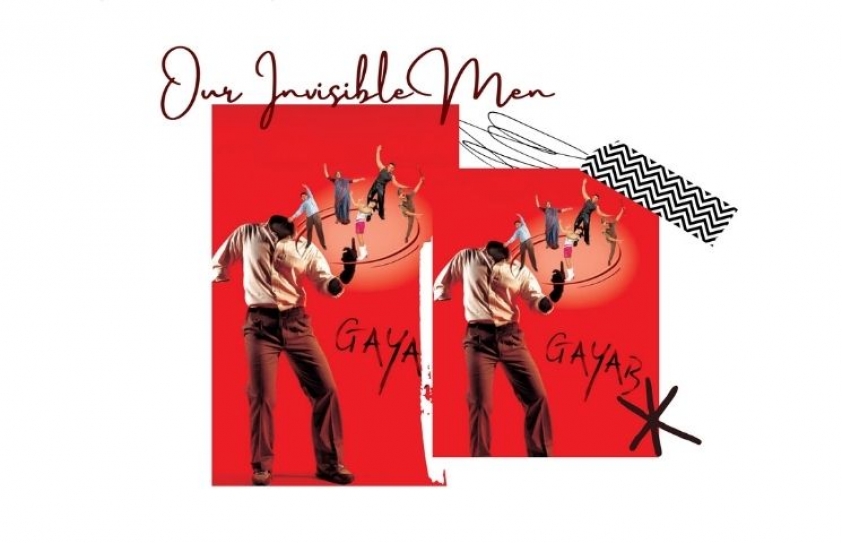 Down the decades, Bollywood has been fascinated with the science fiction notion of an invisible man. It all began with the inspiration sought from James Whales’ 1933 classic The Invisible Man, adapted from a popular novel by H.G. Wells, which was published in 1897. More versions followed in Hollywood. Obviously, our filmmakers detected tremendous potential to give an Indian twist to the theme and cater to the taste of our audiences.

As it happened, though, only a few of them clicked at the desi box office. For this Sunday, I travel back in a time machine as it were, to select B-town’s 10 attempts at wooing the viewers with heroes who could perform the vanishing trick. 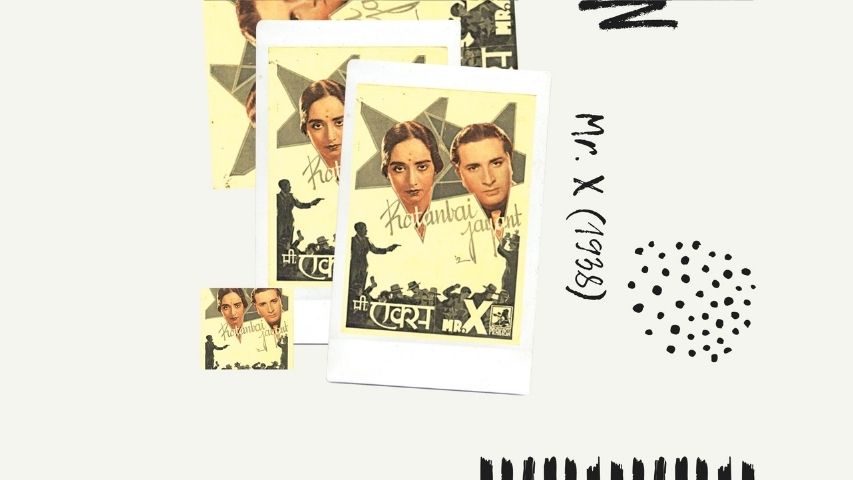 This was the very first film on our shores about the Invisible Man - produced by Prakash Pictures and starring Jayant (Amjad Khan’s father) opposite Rattan Bai (mother of Shobhana Samarth and grandmother of Nutan and Tanuja). The acting crew included Shyam Sunder, Lallubhai, Anant Marathe and Hari Shivdasani (father of actress Babita). However, there is scant material accessible on this first outing into invisible territory. 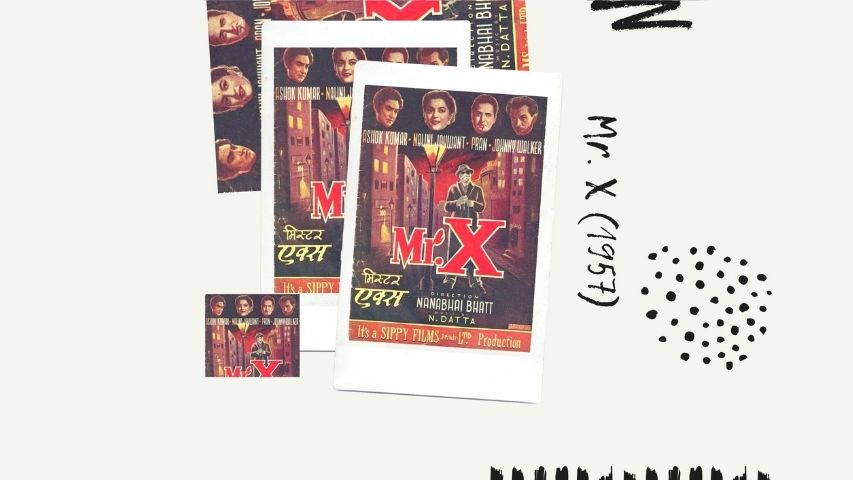 Produced by G.P. Sippy and directed by Nanabhai Bhatt, this one featured Ashok Kumar, Nalini Jaywant, Johhny Walker, Pran and Helen. The plot revolved around a scientist’s lab assistant who gulps down a magic potion to disappear. Unfortunately, there is no antidote to make him visible again.

To add a touch of spice, the scientist’s daughter falls in love with the Invisible Man. There is also a villain on the scene, into kidnapping and killing. Towards the thrilling climax, the villain is caught, the Invisible Man returns to normalcy and the magic potion is destroyed forever.

Johnny Walker played the role of a laundry-man who wears his customers’ stylish suits and breaks into that still-remembered song Laal Laal Gaal. The music score was jointly credited to N. Datta and Chitragupta. 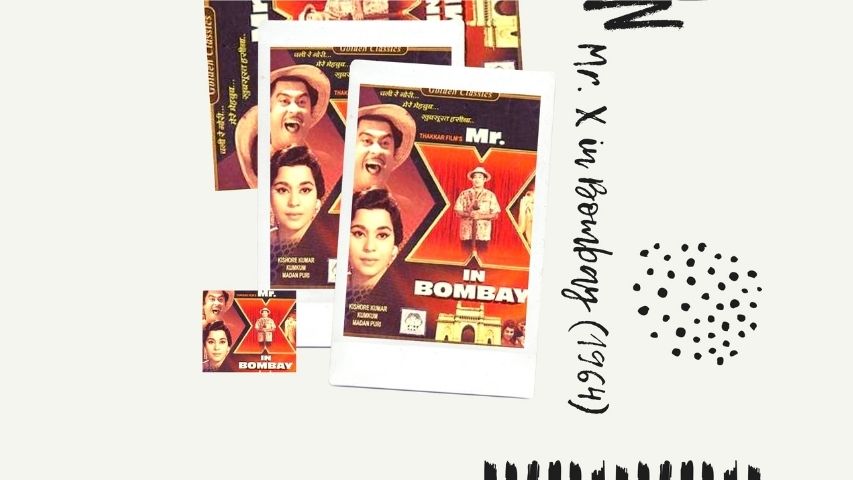 Directed by Shantilal Soni and produced by C.M. Thakkar, here Kishore Kumar, Kum Kum, Randhir, Madan Puri, Mohan Choti, Leela Misra and Tun Tun comprised the cast. Conceived as comedy, the plot concerned a professor who is being blackmailed since one of his experiments has led to the accidental death of an employee. The blackmailer had helped him to get rid of the dead boy and in return wants to marry the professor’s daughter. Not to be outwitted, the professor creates the formula to become invisible. Fairly successful at the cash counters, the film’s piece de resistance was the Laxmikant-Pyarelal song Mere Mehboob Qayamat Hogi, which continues to be remixed to date. 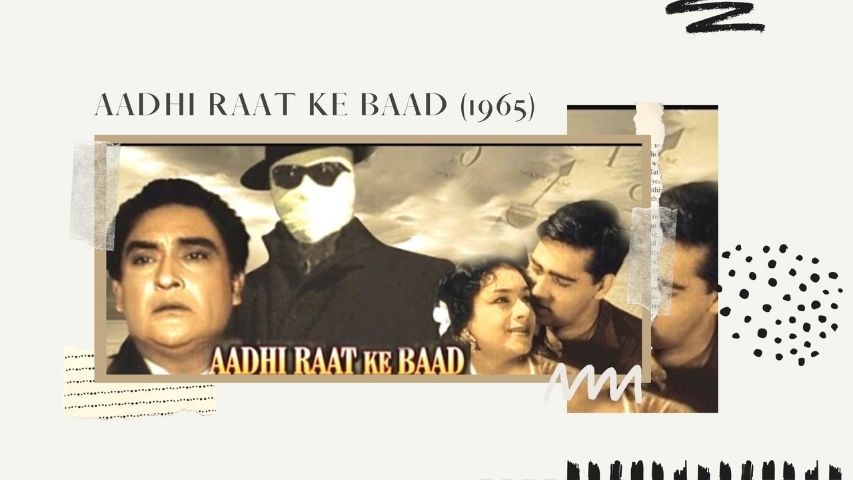 The screenplay was far too convoluted in this account a of a hotel partner being murdered, which sparks mayhem galore, including more gunshots, fist bouts and scuffles. The location even suddenly shifts to Rangoon. The baddy is just a breath away but who’s to identify him?

Headlined by Ashok Kumar, Ragini, Shailesh Kumar, Agha, Sajjan, Ullhas and Naina, the whodunit with an element of invisibility was directed by Nanabhai Bhatt and produced by actor Rajan Haskar, husband of the yesteryear comedienne-cum-vamp Manorama. This was the second time that Ashok went through the invisible routine. 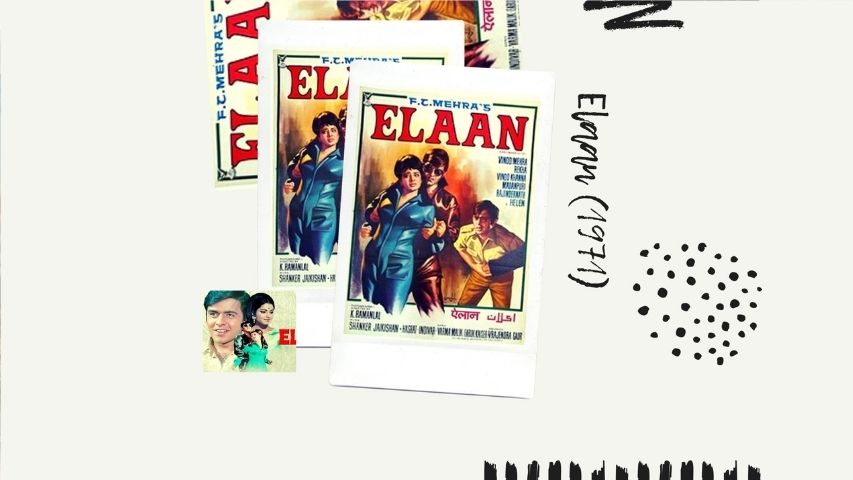 Here, Naresh Kumar Saxena who lives with his widowed mother and sister, Seema, works as a freelance photojournalist - he’s assigned to investigate a spate of illegal activities on a remote island.

On landing there, Naresh is whisked away by a pack of goons and incarcerated in a cell along with scientist Ram Singh. The scientist confides in him about an atomic ring, which can turn one invisible and hands it over to him. Naresh uses it to escape and turns the tables on the bad elements on the island. This thriller, enhanced by the presence of Rekha, was a certified hit. 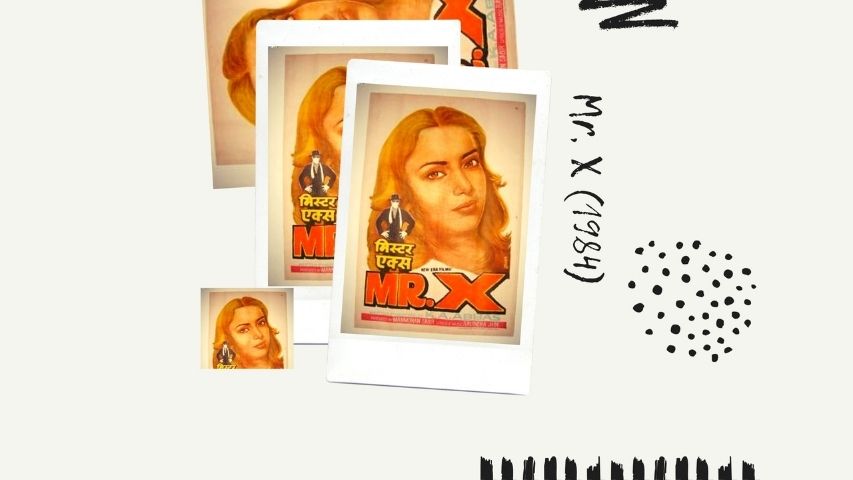 The narrative begins with a voice-over on the evolution of mankind in the voice of Amjad Khan and moves on to a professor who has cracked the formula of becoming invisible. But Ramesh, one of his former students, drinks the magic potion. Invisible now, he wreaks havoc in the city, the crime rate spiraling beyond control.

The professor and his daughter ask another former student - who has become a much-respected scientist in the U.S. - for help. And so you can guess that all ends well.

Ravindra Jain composed the music. Perhaps for a lack of funds, the background music was taken from the Amitabh Bachchan hit Don. You get the impression that the film was long-delayed and was somehow finally cobbled together. Even Amol Palekar’s voice seems to be dubbed in some scenes. As a filmmaker, his socially concerned films such as Saat Hindustani and Shaher aur Sapna best serve K.A. Abbas’ memory. 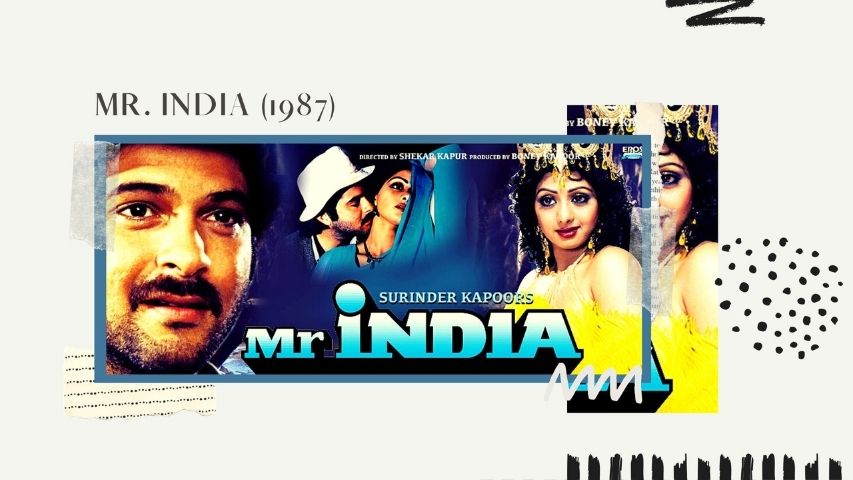 Shekhar Kapur’s second go at direction (after Masoom), was this delightful entertainer. It starred Anil Kapoor, Sridevi, Amrish Puri, Annu Kapoor, Ashok Kumar, Sharad Saxena and Satish Kaushik. Said to be one of the last scripts written by Salim-Javed, the focus was on the good-hearted but poverty-stricken Arun Varma. He looks after ten orphan kids, and struggles to make ends meet. A part of the house for orphans is leased to journalist Seema. And they come into conflict with the fearsome Mogambo, who wants the house to serve as his store for illegal arms and ammunition.

His father’s friend, Professor Sinha, introduces Arun to a gadget to become invisible. Arun now adopts the name of Mr. India and takes on the might of the arch-villain whose line of dialogue, “Mogambo khush hua” is quoted to this day and age. Next, Seema is kidnapped and the gadget is demanded as ransom.

Borrowing shades from the Shammi Kapoor starrer Brahmachari, the script, direction, the ensemble cast and the Laxmikant-Pyarelal music score (who can ever forget Hawaa Hawaai?), made Mr. India a mega-hit, to be cherished forever.

Periodically, plans were announced for its sequel, but without Sridevi it would be now impossible to make this a franchise. 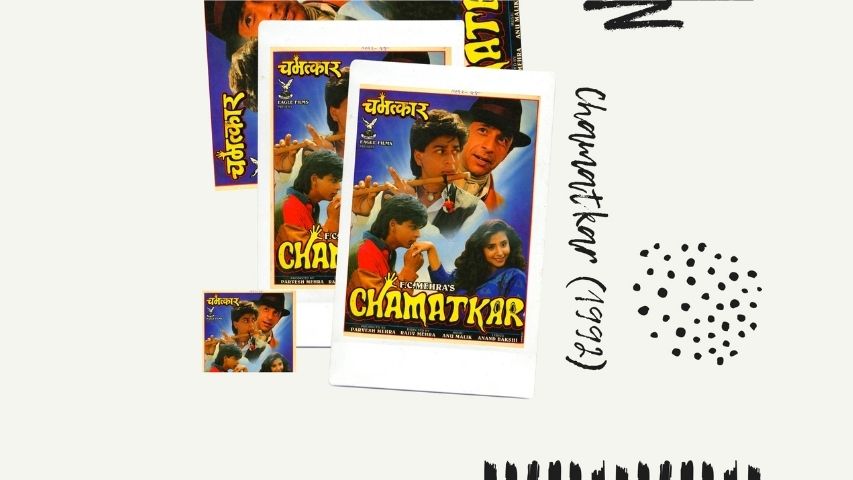 Inspired from the friendly ghost Casper of the comic strips, this caper was directed by Rajiv Mehra, starring Naseeruddin Shah, Shah Rukh Khan, Urmila Matondkar, Tinnu Anand, Shammi Kapoor and Ashutosh Gowariker. The plot revolves around Sunder, a villager who had been conned by a friend. On reaching Bombay, he loses his luggage and is pickpocketed. While taking shelter in a graveyard, he meets Marco, an invisible ghost, who comes to his rescue. Ensue hilarious antics, the comedy was a commercial success. 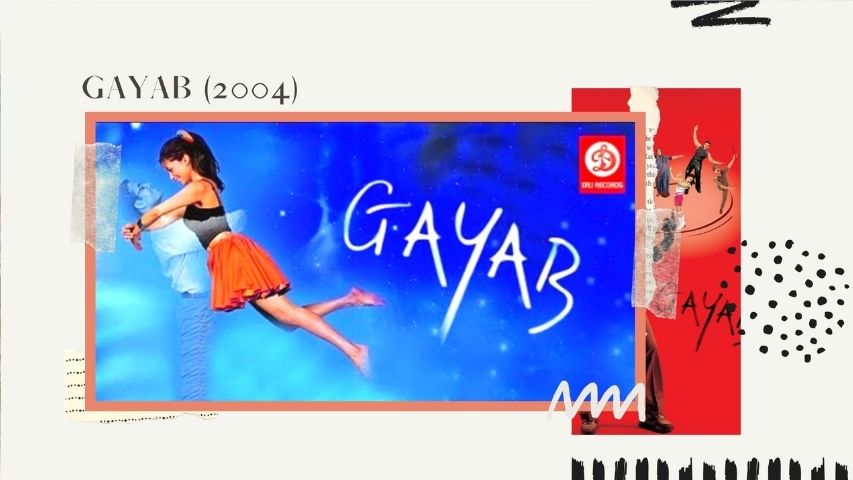 Directed by Prawaal Raman and produced by Ram Gopal Varma, this supposed entertainer featured Tusshar Kapoor and Antara Mali in the lead roles. Tusshar plays Vishnu Prasad, an unpopular nerd nagged by his mother and ignored by his father.

He is in love with his neighbor Mohini who’s besotted with Sameer. Beaten black and blue by Sameer, Vishnu sits at a lonely beach spot and prays to the divine forces to make him disappear from the world since he is so unwanted. And what do you know? He becomes invisible as his prayers are answered. Excited, he spies on Mohini and lands Sameer into a mess by robbing a bank. Uff, need one say more about this calamitous flop? 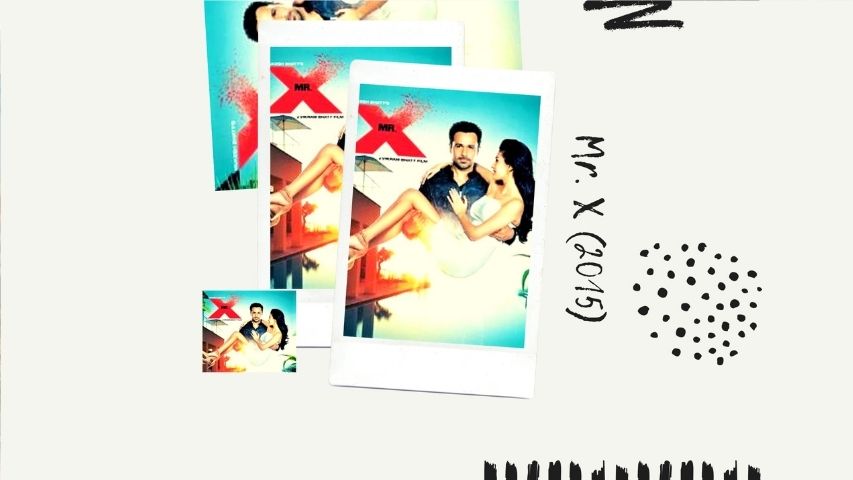 Inspired by Mr. X (1957) directed by Nanabhai Bhatt (Mahesh Bhatt’s father), the focus was on the hero who becomes a vengeful vigilante on turning invisible. A mind-basher, the screenplay was totally confusing, wandering into scenes of terrorism, a police squad, which never knows its job, and quite inevitably, there were romantic interludes now and then, which are best deleted from the memory files.