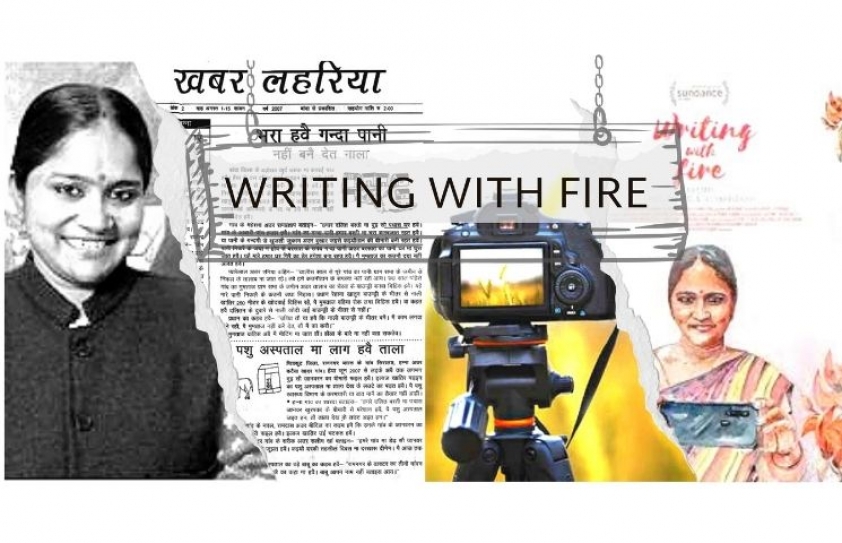 In a mud-walled house in rural northern India, Meera Devi sits across from a woman who recounts how four men broke into her house and raped her. "They (people in positions of political power or of a higher caste) can do anything. They can even kill us," the victim tells Meera, who's recording the interview on her smartphone. The woman's husband sits on the floor on the side, listening to the interview with a pained expression. He says, "We don't trust anyone except Lahariya."

This is a scene from a documentary called Writing With Fire, which profiles Khabar Lahariya (Waves of News), India's only major news outlet run by women from marginalized communities. It focuses on rural reporting through a feminist lens and is led by chief reporter Meera Devi.

The film won the audience award in the World Cinema Documentary category at this year's Sundance Festival - it's directed by Indian filmmakers Rintu Thomas and Sushmit Ghosh.

Khabar Lahariya began as a small Hindi language newspaper in 2002 in the northern Indian state of Uttar Pradesh. Many of its reporters are Dalits, formally called "untouchables" - people at the very bottom of India's ancient 4-level caste system considered by higher castes to be so impure, they should not be touched.

The Indian constitution bans discrimination on the basis of caste but it persists. Two-thirds of rural women and about half of rural men practice untouchability themselves or had a family member who did, according to a 2016 survey of non-Dalit Hindu adults in the Indian states of Uttar Pradesh and Rajasthan, conducted by the University of Pennsylvania and the Indian nonprofit Research Institute for Compassionate Economics. That could mean they refuse to eat with lower caste people or don't let them enter their kitchen, which is considered a sacred place in Hindu households. Untouchability is more common in rural India, where Meera and her colleagues live and report. 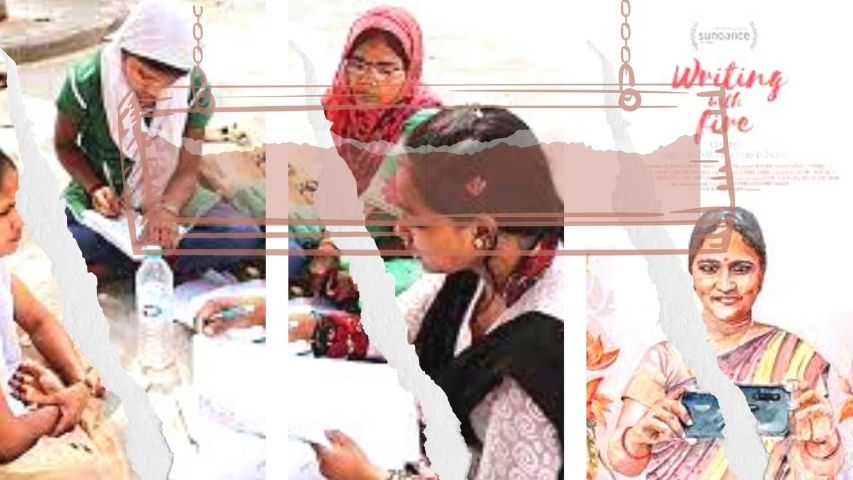 Lower caste Indians are routinely beaten up and even killed by members of dominant castes for marrying outside their caste. And 10 Dalit women or girls are raped every day across India, according to a 2020 report by the international rights group Equality Now and Dalit rights organization Swabhiman Society.

Attacks against Muslims and other minorities, including Dalits, have been rising since the Hindu nationalist party came to power in 2014, Human Rights Watch said in a 2019 report. In March, the research group Freedom House downgraded India's global freedom status to "partly free" citing increased attacks on minorities and a "crackdown on expressions of dissent by the media, academics, civil society groups, and protesters."

This is the environment in which Khabar Lahariya's journalists report on the brutal murder of a woman, profile a young Hindu nationalist leader and interview fellow Dalits about discrimination.

The documentary charts the print to digital transformation of the semi-literate newsroom - most of the reporters have had some, but not a great deal of education - and documents their struggles with the basics of the English language (which they need to know to operate the smartphones they use when reporting). It follows Meera and two other colleagues as they find workarounds to challenges like power outages while reporting, interviewing unyielding, patronizing elected officials; all the while, many of the reporters' families are pressuring them to marry because that is what is expected for many women in India.

So what keeps them going? The answer might lie in the ending scene of the documentary in which Meera says, "When future generations ask us, 'What were you doing when the country was changing and the media was being silenced?' Khabar Lahariya will be able to say proudly that we were holding the powerful to account."

NPR's Sushmita Pathak interviewed Meera Devi over email in Hindi and translated her responses to English.

What is the biggest challenge for you as a female Dalit reporter in India?

The biggest challenge is being a female journalist in a place where journalism is not considered a woman's job. It's hard to be a Dalit woman and a less educated woman in a rural area. It's also challenging to have to question those who consider themselves upper caste, who are audacious and have powerful political connections and who may live in the same neighborhood as I. 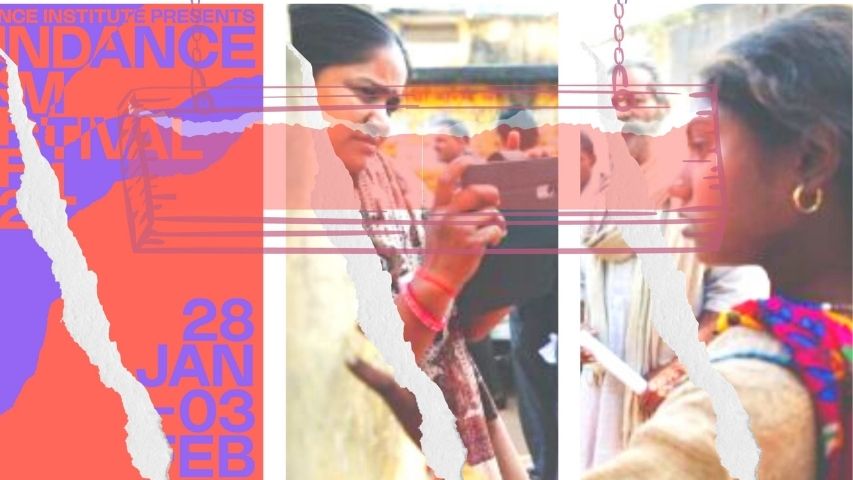 You report about caste-based and gender-based violence and at the same time also face discrimination yourself. How do you tackle interviewees that try to patronize you or try to make you feel inferior?

I face discrimination every day, and not just because of my work. Sometimes it presents itself in formal situations and other times informally but overall, I have won this fight. A lot of times I feel like people try to humiliate me. For instance, when I go to interview government officials they don't answer my questions or don't answer what's being asked. They say, "Go write what you want, we're not going to give you any answers."

I also face discrimination from male journalists, especially while covering a news event like a politician's rally. All the media is huddled in one-place and male journalists who consider themselves and their channels very important plant themselves at the front with their huge equipment and try to boss me around. Many times I have had to fight my way and jostle to get a good view. Sometimes I have to do my reporting from somewhere else, in the middle of the crowd for instance, to get a good scene. But being a woman is very helpful while reporting on women's issues.

[While reporting on caste-based atrocities] I am reminded of my own caste but I don't express it while reporting. Most interviewees don't know my caste. Sometimes they ask about it or try to guess if I'm Hindu or Muslim based on my dress.

What kind of harassment/backlash do you face because of your work? Have you ever felt fearful for your life or for your family?

There have been a lot of instances of intimidation. One time I interviewed a woman who'd filed a legal complaint against her brother-in-law. She says he stole her house. After talking to her, I had to get to the other side, so I went to visit the brother-in-law. He wasn't home but an elderly woman who was there called him. In less than 10 minutes, two men riding a bike arrived. Soon there were several people on bikes, and they blocked the road. They started verbally abusing me and threatening to call the police. They accused me of trying to steal something and said, "if you are interested in photography, why don't you take photos of my bedroom?" They snatched my camera and deleted all the images. They stomped on my press card and copies of the newspaper. With great difficulty, I managed to leave the scene. I went to the local police station but they advised me not to file any complaint. Even today, I see the man in my neighborhood from time to time.

I have got threats against my life. There have been threats against shutting down our newspaper. They raise doubts about my reporting and investigate if I'm really a journalist. They intimidate and threaten because they are powerful. A lot of my colleagues have had mobs turn up at their homes and intimidate their families. They've caused our vehicles to be involved in crashes [by tampering or other means].

Now that we are totally dependent on technology (because we publish online), this intimidation is out in the open for everyone to see, in the form of trolling. If we post a story critical of someone, the trolls start piling up. Technology has provided them with a platform. I am always fearful for my life and for my family. 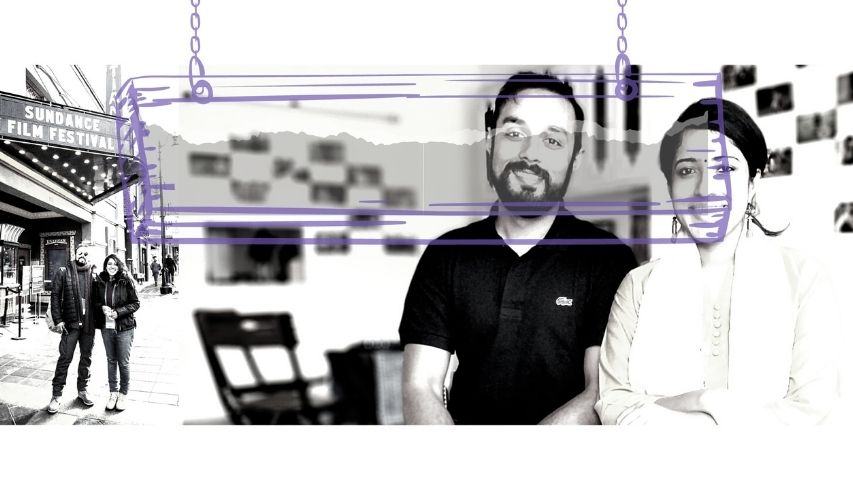 The film charts Khabar Lahariya's transition from print to digital. What were the reasons for that shift? How do you feel about it? What are the technical challenges?

The transition from print to digital was essential for us. Not just because everyone else was moving toward digital, there were other reasons too. Printing a newspaper is a costly affair and selling the newspaper was challenging.

When we went digital, there were women in our team who were seeing a smartphone, touching a smartphone for the first time. It was surprising and amazing. They had to learn to operate the phones because their work (such as recording the interview and other videos) was done on the phone. There were a lot of challenges but we made it a success together. There were different challenges every day and with each one we learned to come up with new solutions. No electricity? We had a solution for that too.

There are many challenges that your all-female newsroom faces. But what is your biggest strength?

The challenges are our biggest strength. The values and objectives of our organization are our strengths. As women, we are each other's strength. We are an amazing group of friends who share all our joys and sorrows with each other, and not just work-related ones. Our rural reporting through a feminist lens and our unity as a team is our strength.

This film won an award at the Sundance Film Festival in the USA. Do you think viewers in the USA understand what caste is? How would you describe it to them?

I cannot say if viewers in the US understand what caste is but I know that there are Indian-Americans there. It is important to talk about caste-based discrimination, about the abuses of the rights that the Indian constitution has granted us. It doesn't matter if it's American viewers or viewers from any part of the world. As a citizen of India, how can my life be separate from this?

You can watch Writing With Fire at the upcoming Hot Docs Film Festival, starting on April 29.