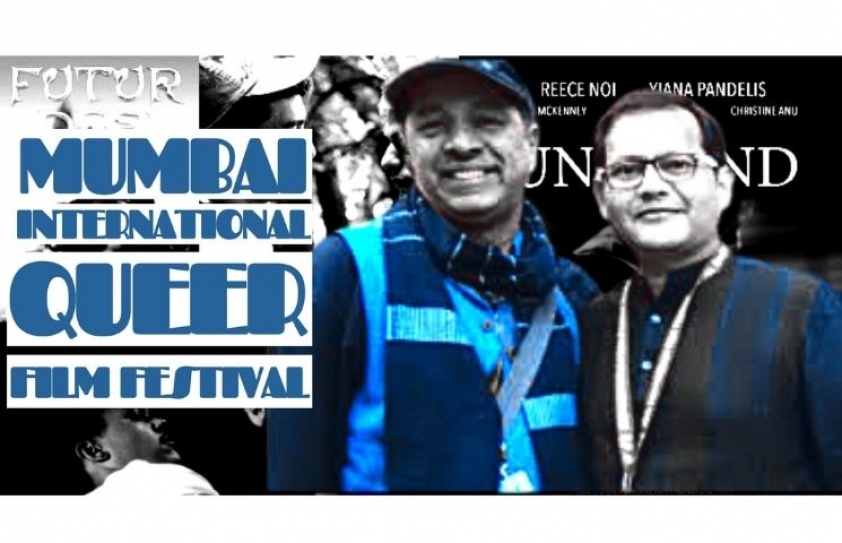 And, actress Renuka Shahane offers Rs.50,000 each to the other four shortlisted scripts, reports The Daily Eye Newsdesk

The 12th edition of KASHISH Mumbai International Queer Film Festival, South Asia’s biggest LGBTQIA+ film festival, concluded on September 5th after 23 day-long events, with 12 days of screenings, panel discussions and Q&As. The glittering online closing ceremony on September 5th featured not just announcement awards in nine categories, but also an announcement was made of the winner of the KASHISH QDrishti Film Grant where a filmmaker will receive Rs.2,00,000 to make his or her next film, sponsored by Lotus Visual Productions.

KASHISH QDrishti Film Grant has been supporting filmmakers making their LGBTQIA+ films for the past six years - an attempt to nurture queer content. This year in 2021, the call for script submission was opened only to Indian filmmakers who identified as part of the LGBTQIA+ community.

“We are thrilled about the quality of submissions this year by LGBTQIA+ identifying filmmakers who have sent in such beautiful stories that offer an insider’s perspective to the lived experiences of the LGBTQIA+ persons.  We are highly obliged to Lotus Visual Productions for offering this grant, and super delighted that Renuka Shahane has chipped in with money to support production of the other four shortlisted scripts. It is time to rejoice, and my heart is filled with pride”, said Sridhar Rangayan, festival director.

Announcing the winner, jury member and senior screenwriter Robin Bhatt said, “The entire journey from reading the script, not once but three times, was a learning experience - getting into the mind of creator was an eye opener, few more bulbs lit up inside me and  I realized that KASHISH is not just another film festival, it’s a stage for young filmmakers to see, learn and make films about emotions, fears, humiliations and joys of being who you are. All five scripts were good, I hope they get made. There always is one winner and by unanimous vote we chose the most promising script The Caress by Bhargav Lahkar. 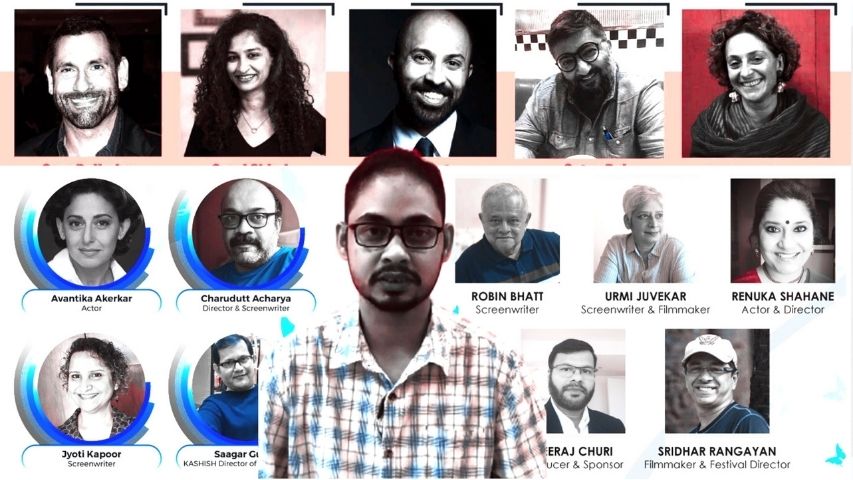 ‘The Caress’ is the story of a middle aged trans man who crosses paths with an earlier lover and they have dinner together, that heals the resentment between them and frees both of them from their regrets.

Exulted at winning the grant, filmmaker Bhargav Lahkar said, “I am so grateful that my story and screenplay has been able to meet the expectations of the jury members, and I am thrilled that my story has been able to capture their minds. I hope after this film is made, it will capture everyone’s hearts as well. And through this film queer love stories will be heard. I am so looking forward to making this film with all my efforts. Thank you so much!” Bhargav’s documentary short ‘Towards Hope’ was screened at this year’s KASHISH 2021 film festival.

Neeraj Churi, producer at Lotus Visual Productions, who is sponsoring this grant, said “We were heartened to see participants from a broad spectrum of the LGBTQIA+ community who presented truly diverse scripts covering nuanced and, at times, personal stories about non-binary, lesbian, bisexual, and transgender experiences. The complex stories and the presentation energy of all the finalists was encouraging, making the judging process challenging. As we congratulate the winner, we wish all the participants the best in their filmmaking journey and encourage them to join us again for the following year.”

Renuka Shahane, well-known actor & director who was on the jury said, “It was an honor and a great pleasure to be on the KASHISH QDrishti film grant jury. The five stories pitched to us were diverse, rich and unique in their representation of particular aspects of the LGBTQIA+ world experience. The jury discussions were also very enriching where the final decision was made with a lot of considered deliberation and mutual respect among us. I am really thankful to all the writers and directors from the LGBTQIA+ community who have delved into their personal experiences to share a part of themselves with us,” and added, “I am happy to offer Rs.50,000 to the other 4 short listed filmmakers to make their films and realize their dreams.”

“Being part of the KASHISH QDrishti Film Grant 2021 was very exciting. It is not often that one gets a chance to interact with the filmmakers after reading their dreams. An interactive pitch session provided an additional dimension to the selection process. I would say that these scripts opened a portal for the jury into a world that mostly remains hidden. All the five scripts dared to investigate spaces deeply personal and as yet unexplored. A quiet rebellion resonated through all of them as these new voices underlined our collective human struggles,” said jury member Urmi Juvekar, screenwriter of two National Award winning films. 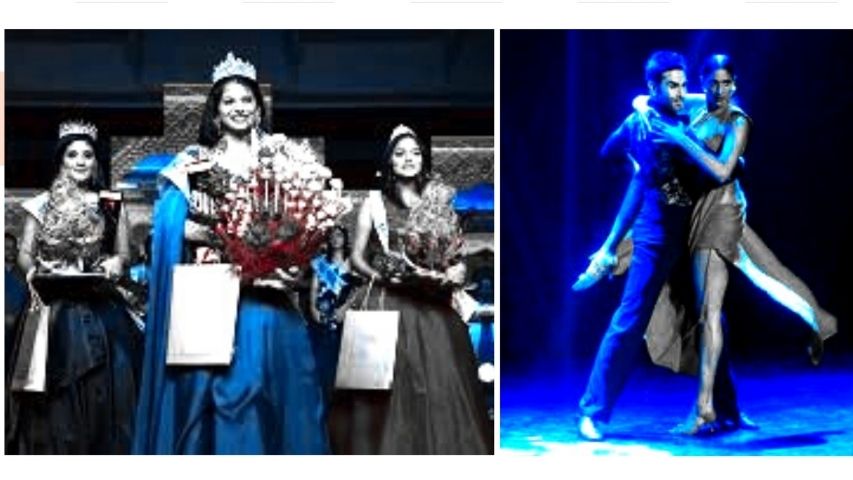 There was an open call for script submissions and out of the dozen scripts received by LGBTQIA+ filmmakers based in India, 5 scripts were shortlisted by an eminent pre-jury panel. These 5 scripts were pitched by the filmmakers at an online pitching session to the 5 final jury members who selected the winner based on not only the strength of the script, but also the director’s vision and mission of the project.

The other scripts that were shortlisted were Aaj Chandni Ki Nagri Mein by Soumyajit Ghosh Dastidar, Baby Dyke by Sonal Giani, Sifr by Jasleen Kaur and Thumkaa by Abhaysingh Kalbhor.

“In the post-sec 377 India, when the legal discrimination against the LGBTQ community has been removed, there is still a lot of mending and sensitization that needs to do done on societal level, we as the KASHISH QDrishti Film Grant Pre-Jury were collectively looking for such narratives that can help for furthering a better understanding and acceptance for the LGBTQ people from outside as well as even inside the community. We have shortlisted five scripts that cover the wide spectrum of Indian LGBTQ+ community, and also shine the light on the lesser represented identities of the community,” said Saagar Gupta, dialogue writer and director of programming of KASHISH Mumbai International Queer Film Festival.

"It was an absolute honour to be a part of KASHISH QDrishti Film Grant Pre-jury. What struck me the most about the entries was that most of them had their heart in the right place. And that more or less sums up KASHISH for me - a film festival full of heart. My best wishes to all the participants. May your stories see the light of day! " said screenwriter Jyoti Kapoor.

"I feel proud and satisfied to have been part of the KASHISH QDrishti Film Grant Pre-jury. Each of the scripts had a unique voice and truth. Making a choice was not easy. I wish all applicants success and pray that we have more inclusive stories and new voices across all platforms", said writer & director Charudutt Acharya.

“To be part of the KASHISH QDrishti Film Grant Pre-Jury introduced me to some wonderfully passionate and committed storytellers whose stories need to be seen and heard. Kudos to all the participants,” said actor Avantika Akerkar.

The winner of the KASHISH QDrishti Film Grant will be mentored by senior screenwriters, and also will be provided with other technical resources to complete the film, and have its World Premiere at KASHISH 2022.