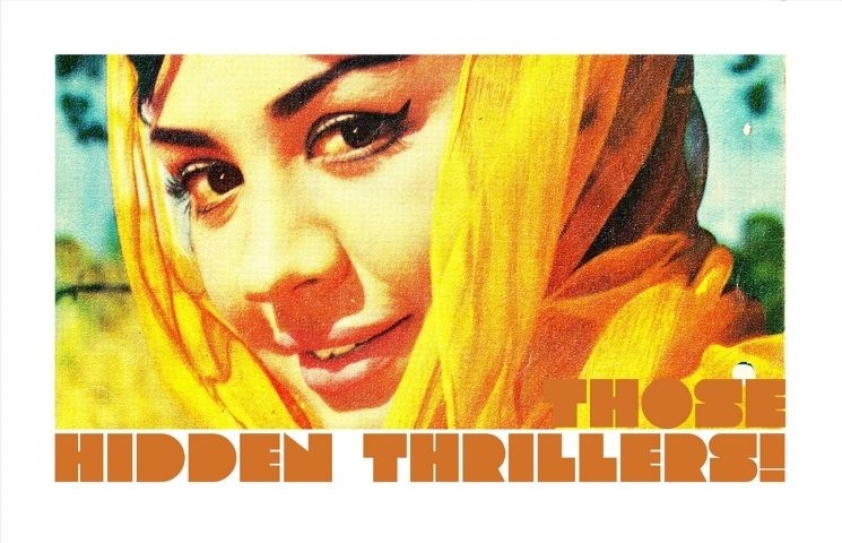 Film historian Dhruv Somani, checks out the engrossing thrillers of the 1970s, which went under the cracks since they flopped.

Thrillers as a genre have always been a personal favorite, especially those of the 1970s. Admittedly it was a genre most often inspired by popular novels and films from the west.

Classics like Madhumati (1958), Woh Kaun Thi, Bees Saal Baad (1962) and Mera Saaya (1964) unlocked themes of the supernatural and reincarnation where fear appears in a deadly disguise and the truth is revealed at the end. Old abandoned mansions on dark moonless nights, empty alleys, white chiffon curtains flying and blowing in the breeze, hooting owls and flying bats chilled and thrilled the audiences.

The ‘70s witnessed several top banner productions, which hit the bull’s eye at the box office. For this Sunday, I looked back at Bollywood - some well made lesser-known films couldn’t rake in profits but continue to attract a niche viewership. If you ask me, they’re perfect for a late-night weekend dekko: 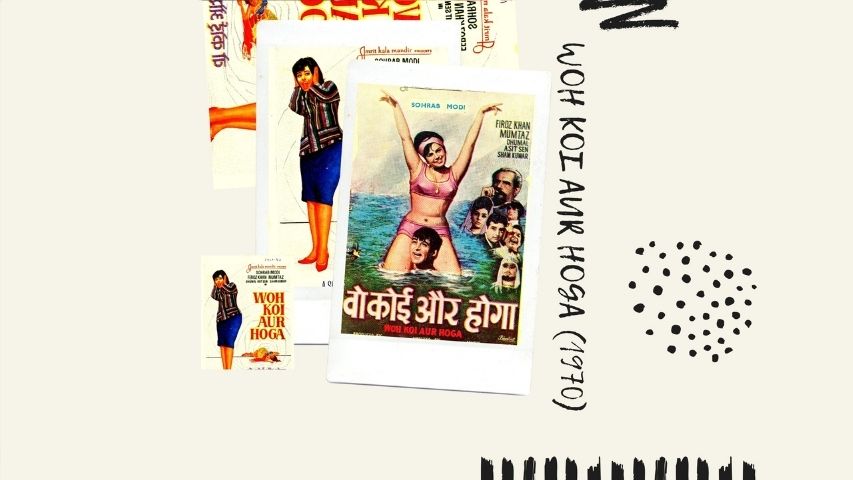 Directed by A. Shamsheer, who had previously helmed the suspenseful Main Wohi Hoon (1966) - he assembled the cast of Feroz Khan, Mumtaz, Sohrab Modi, Dhumal, Asit Sen, Meenaxi and Shyam Kumar. The plot revolves around a mysterious girl, Seema, who plays hide-and-seek with Gopal Babu at a bookstore and in a train compartment and then meets him at a cabaret joint. Eventually they fall in love. Seema escorts him to a museum to see wax statues, which look alarmingly real. To make matters worse, those statues are of the missing inhabitants of a small town near the sinister Purani Haveli. This screenplay was partially inspired by Hollywood’s House of Wax. 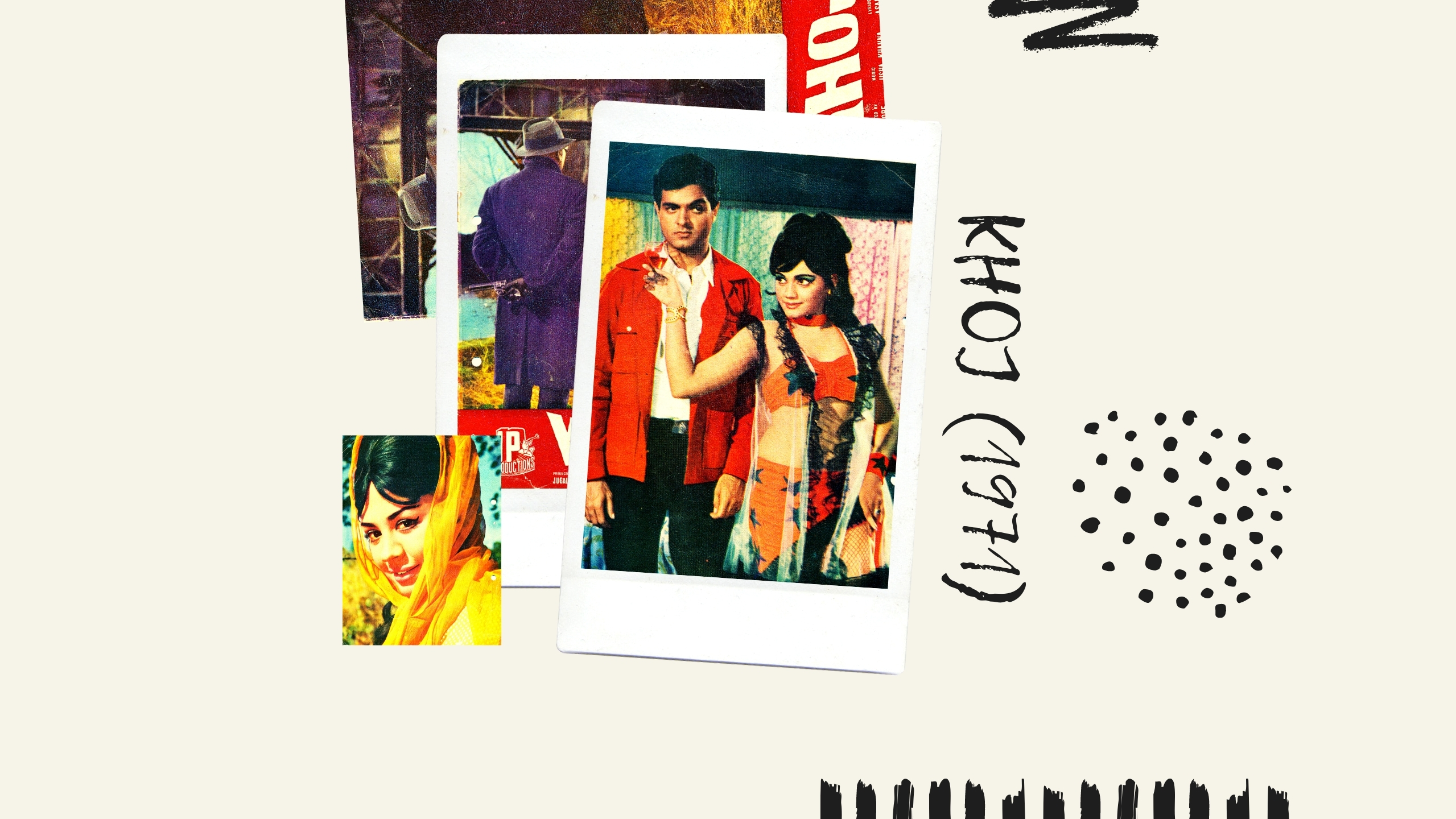 Directed by Jugal Kishore and starring Deepak Kumar, Shatrughan Sinha, Farida Jalal, Jaishree T, K.N. Singh and Dheeraj, the plot line of this film was riveting. Believe it or not, an assassin, named Amar, is shocked when he’s hired by a man to kill none other than himself.  He is further taken aback when a crook, an eyewitness to the crime, blackmails Amar to join hands with him for future crimes. Soon, Amar is appointed as a general manager in a shipping Company while Singh plots to kill the son of the owner. Asha the innocent typist of the Company is charged for the murder. Full of twists and turns, here was a gripping thriller, which kept you guessing about the goings-on right till the end. 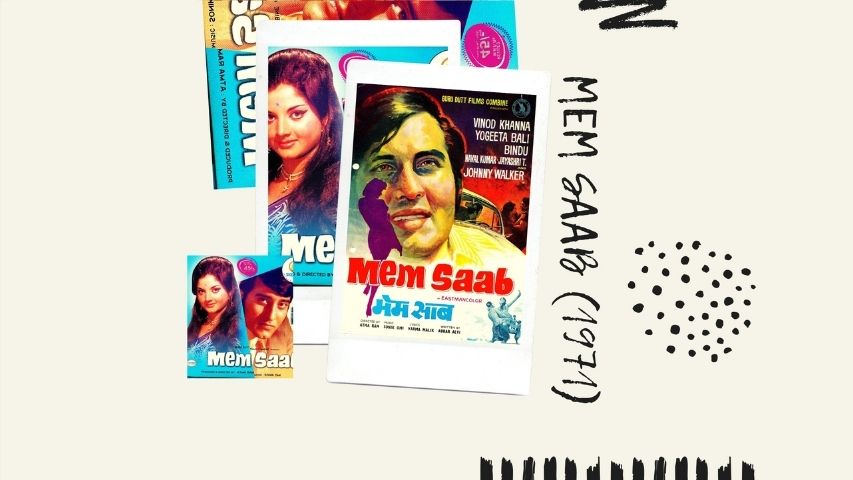 Directed by Atmaram (brother of Guru Dutt) Memsaab revolved around a gang of smugglers and an unknown woman called Memsaab. Starring Vinod Khanna, Yogeeta Bali, Johnny Walker, Jayshree T, Bindu, Asrani, Abhi Bhattacharya, Tarun Bose and Jagdish Raj, the plot kick starts with a fisherman Arjun, who gives a lift to his friend Victor. As soon as they arrive ashore Victor is charged for smuggling diamonds in his cigarette case. Arjun is also arrested but both are set free.

Next, Victor is shot dead while in a telephone conversation with Memsaab. Arjun finds a diamond cufflink on the floor, which belongs to the killer. Investigations reveal that the cufflink belongs to Rupa Seth the owner of Sea Rock Fisheries. Naturally, the lady wants it back at any cost. Ensues quite a cat-and-mouse game, leading to a surprising ending. The musical score by Sonik-Omi was well appreciated. 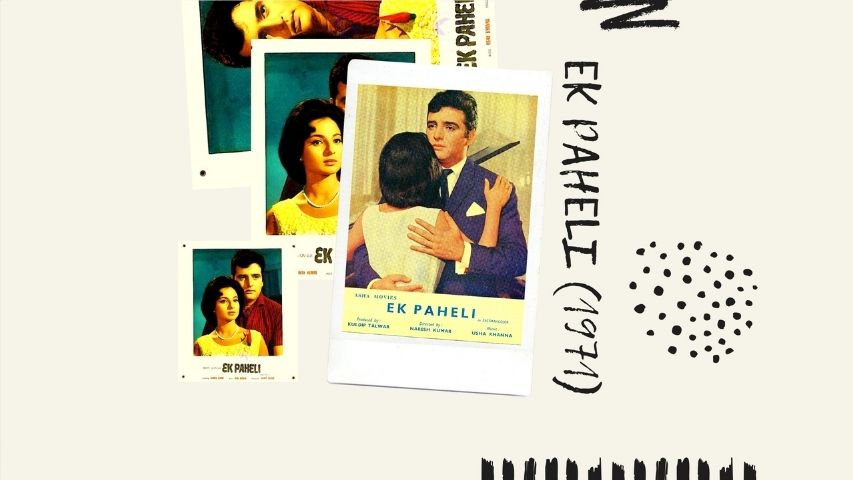 This one starred Feroz Khan, Sanjeev Kumar, Tanuja, Madan Puri, Aruna Irani, Rajendranath, Tun Tun and Jeevan. Director Naresh Kumar spins a yarn about one Dr. Sudhir who returns to Goa from U.K. after his father’s death to take over his family business.

Mysterious events abound after he buys an antique piano for a party he’s hosting. The pianist dies that very night. Oddly, a girl called Maria insists on coming to his house at random hours to play the piano. He feels attracted towards Maria but is unable to gather much information about her from the locals. Soon, the loyal servant of the house dies of poisoning and Dr. Sudhir becomes the prime suspect. His business rival pushes the police into wrongly framing Sudhir, who now has no choice but to find the missing Maria. A hummable music score by Usha Khanna enhanced the strange goings-and-comings-on. 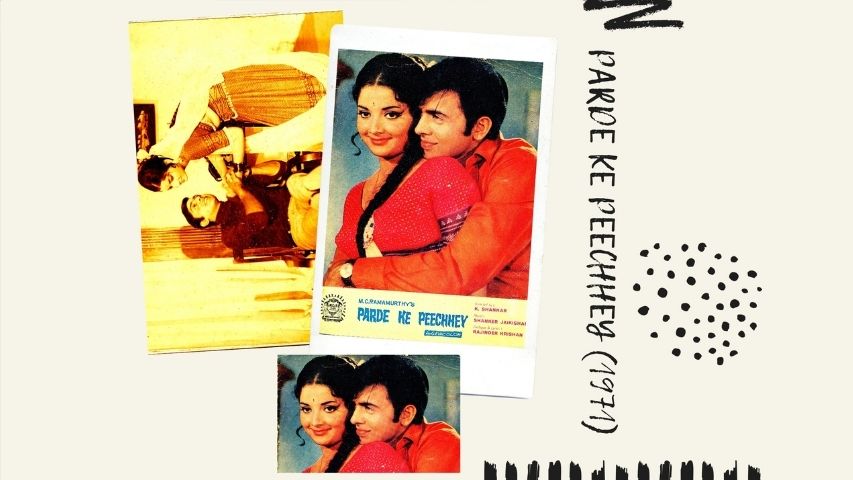 Directed by K. Shankar, it starred Vinod Mehra, Yogeeta Bali, Pran, Jagdeep, Suresh, Tarun Bose, Padma Khanna, Bindu and Raj Mehra. The focus was a deserted haveli belonging to Balwant, managed by his aged maternal uncle. The haveli, the scene of may killings, is believed to be haunted, scaring away the locals as well as the police. However, Balwant decides to visit his property with his friends Anand, Gautam and Rajan, all of whom get attracted to Tara, the daughter of the caretaker. Soon, another visitor, Suchitra - an unknown tourist who is also there on an agenda, joins them.

In the night they see a beautiful girl singing in the mansion after which it is mutually decided that every night one of the four friends would guard the Haveli. Balwant has his lusty eyes on Tara while Rajan and Tara fall in love. A scuffle happens between Rajan and Balvant and it leads to the latter’s death. And then the plot thickens - all eyes are on Rajan who is blamed for Balvant’s murder. Despite the presence of the upcoming Yogeeta Bali, and a melodious musical score by Shankar Jaikishan the suspense flick tanked. 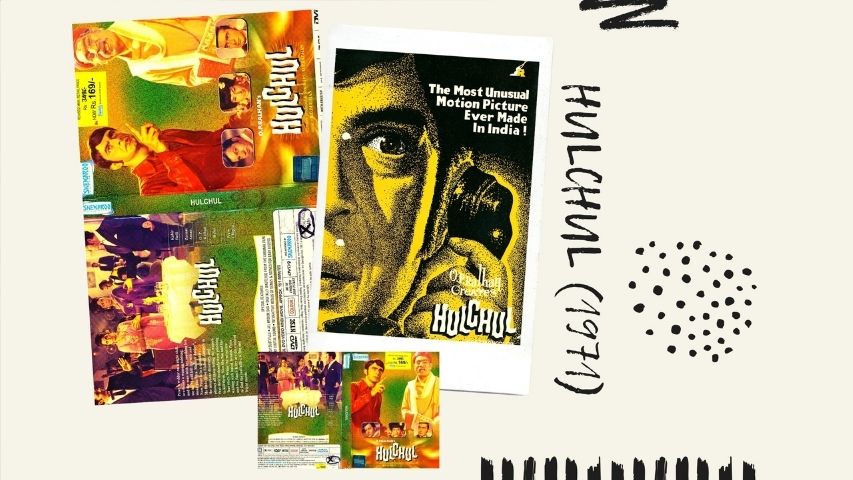 Directed by O.P. Ralhan, the thriller was incorporated with a comic twist. Late one night, Peter (played by the director) is standing under a bridge when he overhears a man and a woman plotting the murder of the man’s wife. He also learns that the man’s name is Mahesh Jaitley.

Being a responsible citizen, Peter searches the telephone directory and finds three persons named Mahesh Jaitley. He then sets out to warn their wives of the imminent danger they face. He faces a number of obstacles but is helped by his girlfriend Kitty D’Souza. Quite zanily and absorbingly told, Ralhan introduced Zeenat Aman in a brief role in this film opposite Prem Chopra. Kabir Bedi also made his debut, while the supporting cast comprised Sonia Sahani, Madan Puri, Chand Usmani, Tun Tun, Ramesh Deo and Helen. Slick and funny, it was rejected at the ticket windows but remains fresh in the minds of people. 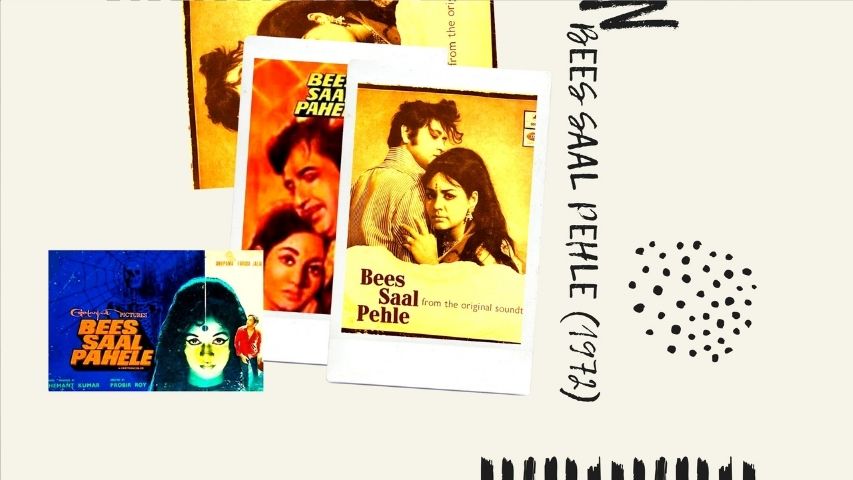 Here an ageing caretaker of a mansion narrates a tale of love and betrayal to a young traveller on a stormy night. Soon, the visitor begins to experience terror around as the cupboard doors slam open and shut and a haunting voice echoes in the corridors. The caretaker knows it all and says the place is spooked because the local Thakur, who wanted her, killed a young man Anand who was in love with the beautiful Radha. He diabolically weaved a web of lies and deceit trapping Anand and the people surrounding him. Hemant Kumar’s music score was appreciated, though the film flopped miserably and is almost impossible to locate. Incidentally, Hemant Kumar’s son, Jayanta, was introduced as the hero with the name of Ritesh in this film and eventually married Moushumi Chatterjee. 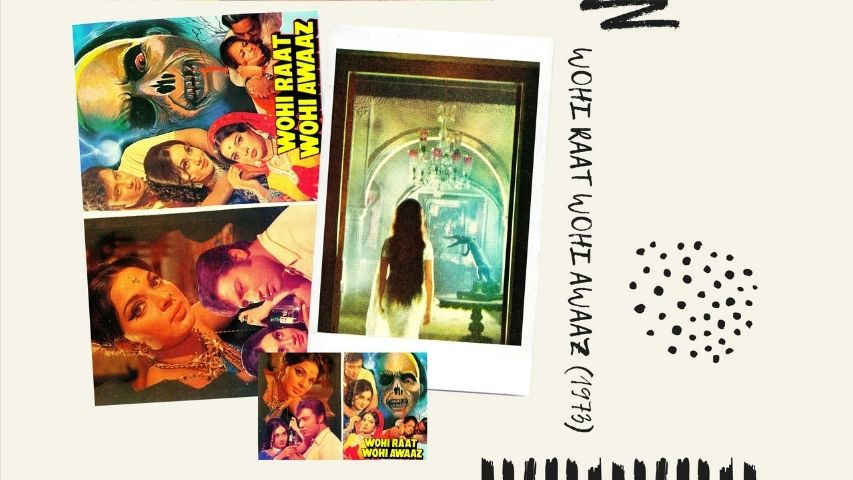 A Zamindar’s younger son Vijay returns from abroad and tries to investigate the mystery around his old ancestral home. Predictably, as the body count of the dead people rises, the heroine Sarita helps Vijay to solve the mystery. The outcome bombed. It is remembered though for its melodious music by the Sonik-Omi duo. Incidentally, Omi also played a cameo role in this film. 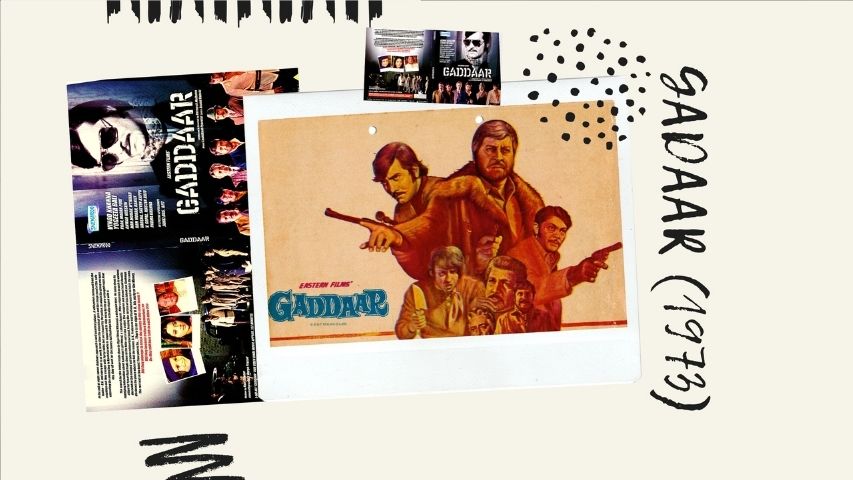 But then one of them turns out to be a double-crosser, who after a long search is traced to the hills of Himachal Pradesh. The action-packed finale was excellently executed. And Vinod Khanna was noted for his strong screen presence. 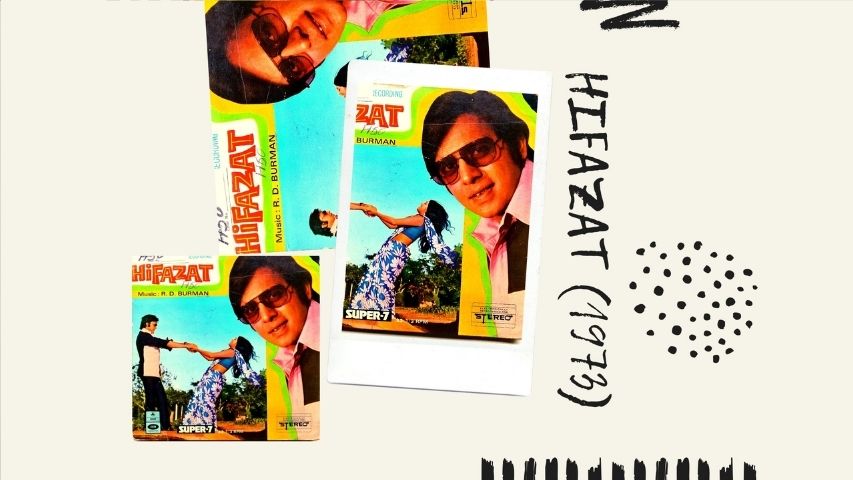 The location was Sona Haveli where two thieves dump off a dead body. In a scuffle the boss kills his assistant, but the boss is killed too by an unknown entity. Cut to Kishore and Asha who are in love but come from feuding clans. After much coaxing, Kishore’s father agrees to the alliance but there’s a hitch ahead. It seems Asha is not the real daughter of Judge Ram Pratap whose family (never mind if Asha is adopted) has been under a curse. Oh well, by this time stories of curses had been taken over by the horror genre. Hifazat is also popular for it is one of the rare and the most under rated musical scores of R.D. Burman. 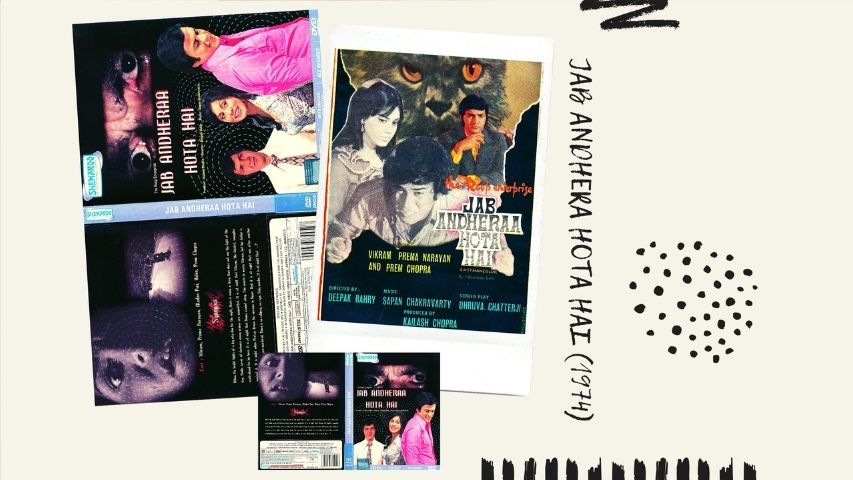 Directed by Deepak Bahry, the cast comprised Vikram, Prema Narayan, Prem Chopra, Helen, Jalal Agha, Keshto Mukherjee, Dulari, Naaz, Sajjan and Anita Guha. The screenplay begins with a girl being dropped off on a deserted road. While she’s walking towards her house, she realizes she’s being followed.  She tries to run for her life but is strangled to death. The story moves on to   Vikram - he is working for a smuggler Sohanlal Bhardawaj who is keen that his daughter Roma should be married to the wealthy widower Pratap Saksena.  Vikram and Roma fall in love and have to unravel the murky past of her father. Clearly, this Andhera, was inspired by Alfred Hitchcock’s Frenzy (1972). Director Bahry survived the flop, though, and went on to helm the super-hit Agent Vinod for the Rajshree banner, three years later.