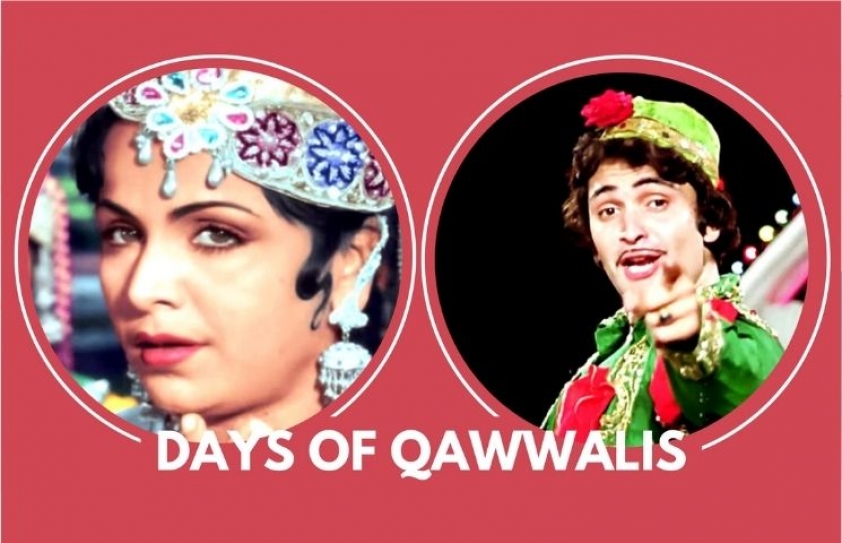 Film historian Dhruv Somani asks why have the qawwalis, once a big draw in the Bollywood movies, have gone with the wind today?

Once, the qawwali maintained a sacrosanct place in yesteryear’s film music. A mystic tradition known for more than 500 years, the form gained momentum in Hindi cinema in the 1930s ever since the advent of the talkies.

The first qawwali - Nazariya Taane Hai Teer Kamaan - was recorded for Barrister’s Wife in 1935. During the same year a qawwali was heard in Talaash-e-Haque sung by Jaddan Bai (Nargis Dutt’s mother).

The qawwali is a presentation of the authentic Sufi spiritual song, which conveys the divinity of the Almighty. In its purest form it’s considered as a religious experience for both the listener and the performer. Mehfils would begin towards the evening and last till the early hours of the morning. The great prolific poet Amir Khusrau who passed away in the 14th century, was addressed as the founding father of the qawwali genre since he debuted in this style to mark the death of his spiritual guide Nizamuddin Aulia.

A qawwali meant words worthy of remembrance praising the Almighty, but with changing times it switched to freeform lyrics in Bollywood cinema. The qawwali ideally featured the harmonium and the tabla as the main musical instruments, along with the signature cyclic clapping of hands in sync with the performance. The qawwals usually wore a short jacket under a kurta pajama along with a shimmering topi. While classical music placed emphasis on ragas and taals, a qawwali placed greater emphasis on the poetic text and rhythm. Initially, the qawwali was performed only by men but progressed to include women.

Muslim socials of the 1950s especially forwarded the genre, making it an integral part of the mainstream. Today, it is a near-extinct genre. The plotlines have become more urban and the advent of MTV and the disco-culture have given precedence and moved to hip-hop and rap. Largely, qawwalis in the movies have become as rare as a blue moon.

Here’s remembering, then, this lost component of film music. I have tried to cover most of the memorable qawwalis but pardon me if I may have missed out on a few.

During the ‘50s one of the most memorable qawwalis: Humen Toh Loot Liya, was recorded by composer Pransukh Nayak for Mehboob Khan’s Al Hilal (1958) and Datta Naik wielded the baton for Aaj Kyun Humse Parda Hai, rendered by Mohammed Rafi backed by a male chorus for B.R. Chopra’s Sadhana (1958). 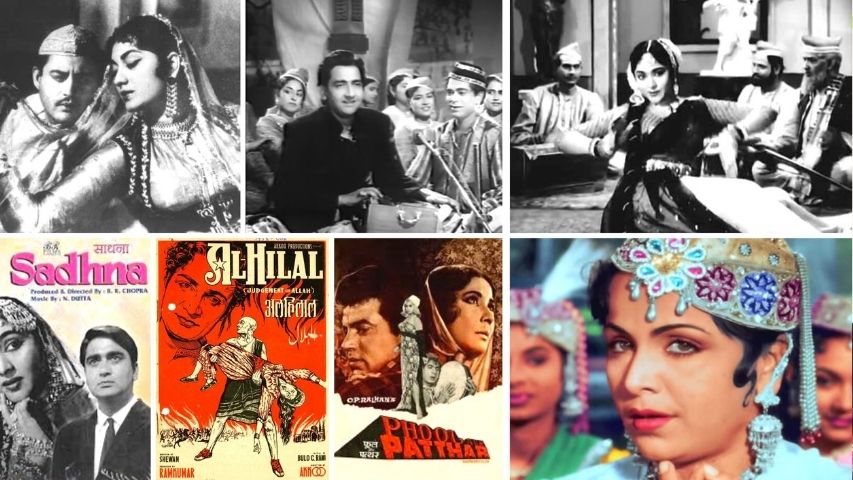 Naushad’s score for K. Asif’s magnum opus Mughal-e-Azam (1960) is outstanding. One of its jewels is Teri Mehfil Mein Kismat Aazmakar Hum Bhi Dekhenge, playbacked by Shamshad Begum and Lata Mangeshkar, who launch into a poetic verbal war. It was pictured on Madhubala and Nigar Sultana.  It continues to be a touchstone of the genre.

The qawwali in the flop film Jab Se Tumhe Dekha Hai (1963), though not a very popular one for its musical beats, still merits mention since it presented two of the Kapoor Brothers, Shammi and Shashi, in the same frame.

My favorite decade of the ‘70s can easily be called the golden decade of the qawwalis, starting off with Zaalim Meri Sharab Mein - in Sunil Dutt’s Reshma Aur Shera (1971), composed by Jaidev, rendered by Manna Dey and pictured on character actor Sudhir.

I.S. Johar’s 5 Rifles (1974), directed by I.S. Johar, may have tanked but is still recalled for Jhoom Barabar Jhoom Sharaabi sung by Aziz Nazan.

In a breezier mode, Nasir Husain’s Hum Kisise Kum Naheen (1977) was highlighted by the R.D. Burman track Hai Agar Dushman pictured on Rishi Kapoor and Zeenat Aman, and is replayed extensively to date.

During the same year Manmohan Desai’s mega-entertainer with music by Laxmikant-Pyarelal, Amar Akbar Anthony, with Rishi Kapoor playing Akbar whooped it up in the widely lauded Sirdi Wale Sai Baba and Purdah Hai Purdah. The latter was particularly notable for its zingy choreography and Rishi Kapoor’s agile moves.

The little-known Charandas (1977) directed by B.S. Thapa, starring Vikram opposite Lakshmi again after the success of Julie, believe it or not had Amitabh Bachchan and Dharmendra jousting to the Rajesh Roshan number, Dekh Lo Ishq Ka Martabba sung by Aziz Nazan and K.J. Yesudas.

The same year Manmohan Desai created a qawwali sequence for Mere Dil Jhoom Zara composed by Laxmikant-Pyarelal, with a twist in the performance with Shabana Azmi and Neetu Singh in Parvarish, who brandished revolvers no less in their hands.

Towards the end of the decade, Kalyanji-Anandji’s Aaj Faisla Ho Jayega Tu Nahin Ya Hum Nahin was seen in Karmayogi (1978) as a face-off between the Ajit and Rekha, in the midst of which Raaj Kumar intervenes to defeat the villain. 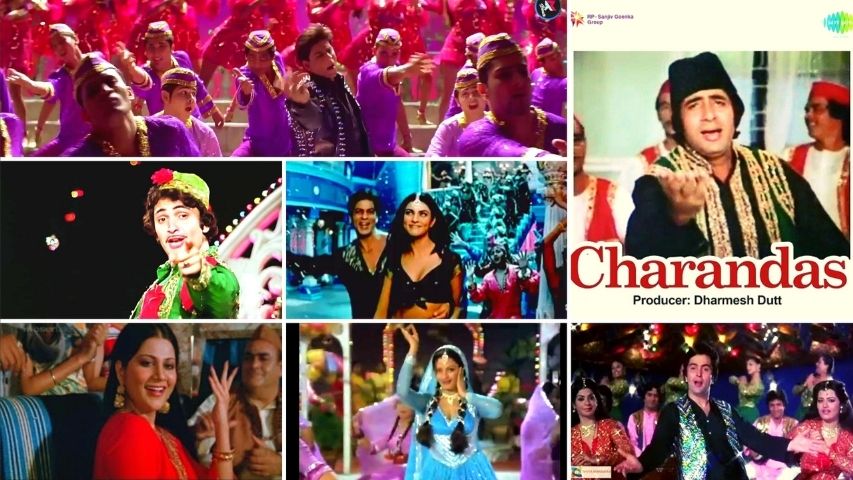 Atmaram’s suspense-laden Khanjar (1980) with music by Nitin Mangesh, can be recalled for the Aziz Nazan-rendered Lo Hum Aa Gaye Hain Phir Tere Dar Par which appears at a crucial juncture of the movie, starring Navin Nischal and Reena Roy.

Ramanathan’s Dial 100 (1982), an action-comedy with Vinod Mehra and Bindiya Goswami staged a qawwali with Asrani and Jagdeep in disguise, as they lip-synced to the lyrics Allah Tauba Hai Tauba Hai.

Towards the end of the decade, a face-off was seen between the parties of the groom and bride - Dulhe Raja Ki Soorat Dekho - filmed on Aruna Irani and Jaishree T. from Ghar Ghar Ki Kahani (1988).

The ‘90s witnessed a steady decline of qawwalis with the domination of either action-packed movies of stories set overseas. The qawwali soon became a pretext for dance competitions. Nevertheless, one does remember the popular song, which began as a qawwali and then became a song of a cry to a beloved - Der Na Ho Jaaye - in R.K. banner’s Henna (1991), the dance being performed with gusto by Ashwini Bhave.

Piya Haji Ali is a still-cherished incantation from Fiza (2000) and was sung by A.R. Rahman, Kadar Ghulam Mustafa and a chorus line. A similar song was featured in Govind Nihalani’s Dev at the Haji Ali Durgah - Rang Deeni by Kailash Kher.

The next year brought Rockstar highlighted by A.R. Rahman’s Kun Faya Kun. And five years ago Bajrangi Bhaijaan (2015) included the qawwali - Bhar Do Jholi Meri - originally composed by the Sabri Brothers but revamped in the voice of Adnan Sami.