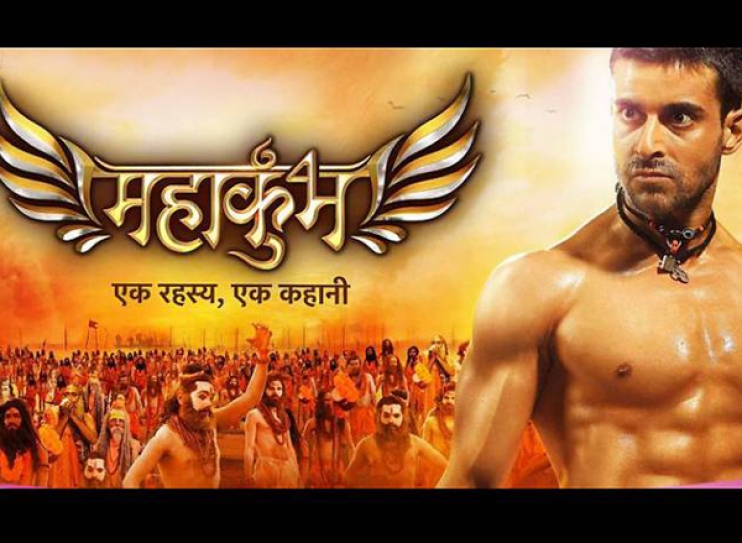 Life OK?s channel driver Mahakumbh- Ek Rahasaya, Ek Kahani, is a unique challenger to the saas-bahu sagas at primetime. Grabbing eyeballs on weekdays at 8 pm, the supernatural thriller isIndian television?s first authentic superhero actioner. Much like the recent crop of internationalaction thrillers, whichhave reverted tomythology, ancient secrets, elixirs and the supernatural for plot ideas. The super hero content is no stranger to Life OK viewers, Adventures of Hatim was one such show on the same channel, but it was an adventure fantasy tale simply told.

Like The Da Vinci Code, Mahakumbhtakesactioners to a whole new level.It has fused mythology and the supernatural with modern day technology, espionage and the perennial power play for supremacy over the world, and not for a positive change, it is always the dark forces. Generic to Bond films and their clones where two or more parties battle it out for an element vital for world supremacy. The crux of the power struggle in Mahakumbh- Ek Rahasaya, Ek Kahaniis the Amrit,the elixir of life that emerges at every Mahakumbh. This is most coveted, as whoever possesses it, will lord over the world with its supernatural strength of immortality.A touch of Rider Haggard?s novels, particularly she. The Sarpa clan and the Garuda clan have been battling for the Amrit every Mahakumbh. Once in every 144 years,the Amrit makes an appearance at the Mahakumbh. To guard it, seven saviourswith supernatural powers are born.

The boy Rudra visits the KumbhMelawith his father Shivanand, who is a Garuda. The bridge over the Ganga is blown up as plannedby Swami Balivesh, one of the head priests, who has pledged his allegiance to the Sarpa clan. Rudrais thrown into the water due to the impact of the blast. He is saved by Oriya Baba, who takes him to Mai Mui. Shivanand is smuggled off to Poland, where a sinister conclaveand Grierson hold him captive, torture and probe him for the secret of the Amrit and understanding it scientifically.

Rudra, whopossesses supernatural powers, is unaware of the gift.Ashegrows older, his powers emerge,unknown to him, he is one of the seven Garudas, the protectors of the Amrit.Rudra is raised by Mai Mui, but is constantly hunted down by Balivesh and his henchman Khoye Paye Pandey of the Sarpa clan. He even runs away from home, only to return, after he has met Charlie a vagabond. On the eve of Dussehra, he is attacked by Khoye Paye Pandey, under the instructions of Balivesh. Oriya Baba saves Rudra, but is fatally injured and dies, but not without meeting his wife.

Rudrarealizes that the Garuda birthmark on his back is responsible for danger to his loved ones. After Mai Mui?s death, Rudra decides to go to Allahabad with Maya.In Allahabad, he meets his father, grandmother, Charlie and his destiny.
Shivanand?s hideout is approached from the mouth of a dry well. Where a bank of computers, and gadgets create a visual display for locating the Garud?s and the Sarpas. The mythological aspect is well blended with science and technology and results in an awesome sequence of visual effects, wherein as Shivanand plays on a keyboard which reproduces strains of devotional music and the visuals spin around. It is science and technology meeting supernatural and mythology. More hi-tech display is forthcoming as a new gadget has just been introduced which will unearth the course of the mysterious Savitri. The script couldn?t get more politically correct as it includes a Cleanup Ganga sub plot; which is a front for the District Collector and Shivanand?s mentor.

The scripting and direction are the frontrunners ? culling a plot out of mythology and giving it a contemporary twist, has pioneered a new genre -- the mythological-thriller on Indian television. In true thriller style, there is no sitting back at 8 pm. It is all edge-of-the-seat viewing. Lensed by Arvind Singh in and around Varanasi, the visuals are a sheer delight ? authentic old architecture, the shamiana speckled landscape, the colourful pennants, the throngs of devotees and sadhus, the majestic Ganga and yes, the foreign presence. It is atrue representation of small town India. In the early episodes, the ace cinematographer gave viewers a fetching view of Poland. The camera work is exemplary.

The high end action sequences (courtesyaction director Marek Solek) and the constant plot twists and turns are complemented by the casting which simply must be commended. Gautam Rode may have stolen hearts in Saraswatichandra, but as Rudra he is matchless,with his piercing eyes, sculpted body and silences. He is energyin motion and his bodylanguage cuts a fine edge. For that matter, even Siddharth Nigam as the young Rudra was spot on.

Mahakumbh has an on-screen Triveni -- three accomplished actresses.Seema Biswas, who made her TV debut playing Mai Mui. It?s unimaginable that an actress of her caliber was missing on the small screen. For Ketki Dave,Mahakumbh was an impulsive decision. As a co-viewer remarked: ?Thapadia Maii had to be played by Ketki Dave.? And now we have had another formidable actressSurekhaSikri, who has stepped in as Rudra?s Dadi!

The 120-episode series has been shot across the world -- from the quietude of Poland to the bustling Ghats of Varanasi.Producer-director Arvind Babbal?sprime time epic is the definitive game- changer. Made at stupendous budget, the highest ever earmarked for a TV show in India, Mahakumbh?s epic proportions are unique to Indian television.
Matchless in many more ways than one, Mahakumbh- Ek Rahasaya, Ek Kahani is one very tough act to follow for not just Arvind Babbal, but Gautam Rode too, Indian television?s true super hero.