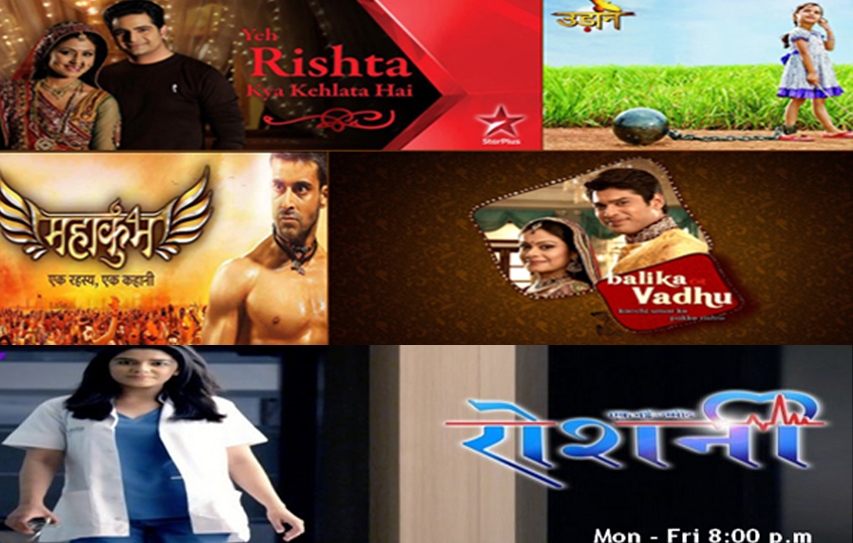 Prime Time showcases a number of shows on premier channels. During the crowded three hour band, a few have had a really long innings and are still going strong. It’s proven that, some soaps start well, but after a hundred odd episodes they lose steam (read that as: the script lost its bite), and viewers; soon after that they and wind up as the channel’s past shows. Some of them manage to engage the viewers with time leaps (a most common remedy for sagging TRPs or a twist in the tale with a new character). Once they run out of leaps, twists, and other ploys, they are faced with closure. Kyunki Saas Bhi Kabhi Bahu Thi is a prime example of two time leaps, and endless twists in the plot – including Mihir and Tulsi’s deaths – both had to resurface. Otherwise, every time it was all quiet in the Virani homestead their nemesis – Mandira would pop up. Yet at 1833 episodes KSBKBT was wound up by the channel.

The main channels have subsidiary channels, so the best of the past line up make their cut on those. Bade Achche Lagte Hain is enjoying its re-run on Sony Pal. Barring the latter episodes, the weekday soap garnered respectable TRPs thanks to the freshness of the plot — a middle-aged romance and the main actors – Ram Kapoor and Sakshi Tanwar – TRP draws. Balika Vadhu is being caught up on Rishtey, from Colors. Although, Balika Vadhu is still pulling in viewers at Prime Time as Colors’ channel driver. It heads my Top Five list of shows which have sustained themselves from their first episode and some are even still around with a respectable viewership.

Since its premier telecast in 2008, Balika Vadhu has shattered a myth that no show with a social message can hold the viewers’ interest and survive more than a few months.

Balika Vadhu then took up cudgels for literacy among girls and adults, women empowerment, widow remarriage, and the rights of women as Anandi became the sarpanch. Dadisa, Anandi and their family became the role models for combating rural society’s self imposed barriers. The show hasn’t seen the last of the taboo of child marriage, as it doesn’t subscribe to the happily ever after. Now, Anandi and Shiv’s daughter who was kidnapped is a child bride.

It’s not that Balika Vadhu always made a successful turn, but the creative team has been sensitive to viewer reactions and gave the latter a fresh attraction in terms of a new character or plot twist. Often times these new characters were played by veterans like Farida Jalal, Sushmita Mukherji and more recently Rajeshwari Sachdeva.

It’s not that Balika Vadhu hasn’t faced actors dropping out. Once again the makers have dispensed with some characters with the convenient fatal accident when an actor wanted out or a prolonged visit to the US. Otherwise, they have replaced the actor – Anandi and Ganga have changed several faces. The last actor change is Shakti Anand, who has stepped in as a very adult Jagdish. Surekha Sikri is the only one who has faced the camera from day one to the present day! Is her loyal servant Maakhan still around?

One can attribute Balika Vadhu’s tremendous staying power to creative scripting with an ear to the ground for the viewers’ acceptance and response. The script of Balika Vadhu deserves to be a study tool.

Star Plus’ channel driver Yeh Rishta Kya Kehlata Hai is a homespun family drama in the mould of the channel’s earlier family saga Kyunki Saas Bhi Kabhi Bahu Thi. A young couple Naitik and Akshara Singhania, who live in a Marwari joint family in Udaipur. The story showcases their journey as husband and wife, now mother and father and their love for each other.

Yeh Rishta Kya Kehlata Hai has been criticized for lack of realism, where a female character would be fully dressed up with layers of makeup to make breakfast for the family and wash dishes. Yet the show’s popularity hinges on its simplicity and highly emotional content and yes, the women who are so relevant to holding the large joint family together. Even nuclear families in the urban centres feel drawn to Yeh Rishta… with its utter simplicity.
This true blue soap opera must be credited for a few shake ups. The popularity of the dubbed Telugu version caused heartburn among the Telugu entertainment industry, which called for a ban for all dubbed shows. Hina Khan, who plays Akshara,  participated in the ‘Power of 49’ campaign in which soap opera actors urged women to vote in the last elections because of the influence soap operas can have on their viewers.

India’s first supernatural-mythological thriller, Mahakumbh- Ek Rahasaya, Ek Kahani played out its stipulated 120 episodes with panache. Set in the backdrop of Uttar Pradesh, the story revolves around Rudra, a boy who possesses supernatural powers. He is one of the seven protectors of the Amrit which appears every 144 years during the Mahakumbh and his father, Shivanand is one of the leading Garuds. The boy Rudra was played by Siddharth Nigam who is currently playing Ashoka; the adult Rudra was played by Gautam Rode, whose next is likely to be an international venture.

Marked by a unique and original concept and script, it straddled two countries – Poland and India. It was a ubiquitous struggle for world supremacy between the dark forces and the protectors, as is common in the genre. The religious fervour of the Mahakumbh gave the show an edge with its classic action sequences and superior VFX. Not for a minute did the pace let up. New characters, played by seasoned actors like Seema Biswas and Surekha Sikri were introduced at just the right moment and if their job in the script was done they were bumped off. So the story remained clutter free thanks to calculated elimination.
Besides its Prime Time recognition, Mahakumbh was the first Indian TV series promoted at the Times Square by Life OK!

One more show dispels the myth that a socially relevant fiction series has no place on Prime Time and is bound for failure. Udaan Sapnon Ki or Hauslon Ki Udaan is a special in this line up. Originally conceptualized by Mahesh Bhatt as a film with Ajay Devgan, it remained unrealsed because of market vagaries. Its producer Mahesh Bhatt has earlier anchored shows like Haqueeqat which dealt with real life atrocities.

Udaan deals with the regressive practice of bonded labour in  Azadganj, where the villagers are terrorized by their landlord,  Bhaiyaji. A young girl Chakor was kept as a collateral, as an unborn child by her parents for the money they borrow from Bhaiyaji for their father’s  funeral. Chakor is a spunky girl who dreams of freedom, fights against injustice and stakes her claim for education. Udaan also deals clears the myths about a local devi whose charity box fills Bhaiyaji’s coffers. When Azadganj gets stifling for the plot, Chakor lands in Mumbai. The village girl’s escapades in the big city and its caverns, has her meet with Rocky a young alcoholic who forgets her in his sober moments and the three taporis who lead her to Amma, her past is still a mystery. It exposes the NGO scam in the name of child welfare, when actually it’s a front for child trafficking for organ transplants.

The script has been supported by an arresting performance by the young Spandan Chaturvedi who is as capable with pranks and mirth as she is in dramatic moments.

A year of telecast, and Udaan is still in flight.

Ek Nayi Ummeed – Roshni is Life OK’s newbie at Prime Time. An apt successor to Mahakumbh. From the very first episode, this medical drama has showcased its classy and distinctive style in every aspect. Just 50 episodes old, it has exposed medical malpractice, human relationships, young romance, the murky business of medical referrals, etc. in Leela Hospital. Each week, Roshni takes a new turn.

Despite its nascent status it deserves it place in the Top Five, as it has  already   displayed a high standard of scripting, editing and production values. Casting is replete with class actors like Amol Palekar, Raghuvir Yadav, Divya Seth and Kurus Deboo.

There is hope for this hospital drama.