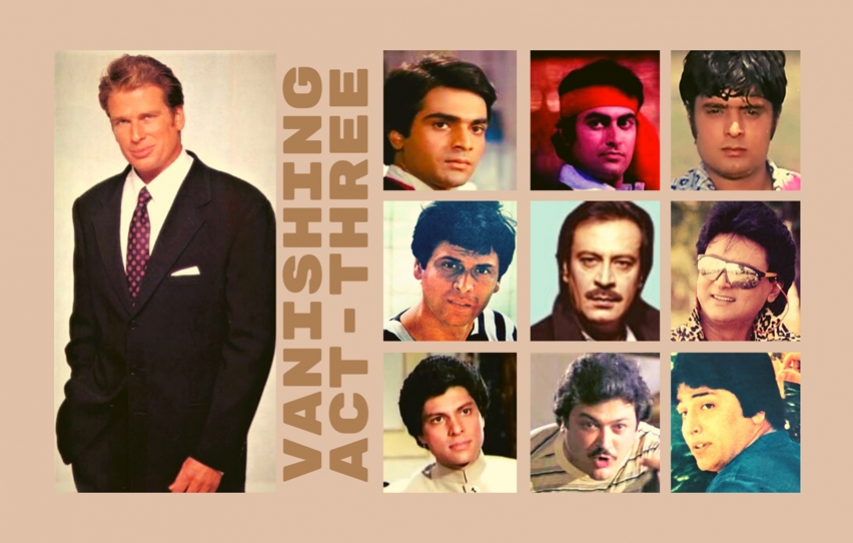 Vanished III: The male actors who disappeared from Bollywood

Film historian, Dhruv Somani, concludes his series on the vanishing acts of Bollywood, this time tracking down the male actors who quit the B-town scene.

Right off, here’s expressing my gratitude for the overwhelming response to the articles Vanished Part I and 2 on gifted actresses who are no longer in the limelight.

For this Sunday I have attempted to write about the other gender, camera-friendly actors who also faded into the sunset as it were. There are several actors whom I wanted to re-discover Sameer Khan, Rohan Kapoor, Sailesh Kumar and Rakesh Panday but was unable to get much information about them.

So, here’s selecting 10 actors with a decent backlog of work behind them. It hasn’t been an easy task but have tried to do my best to connect with them and get an update: 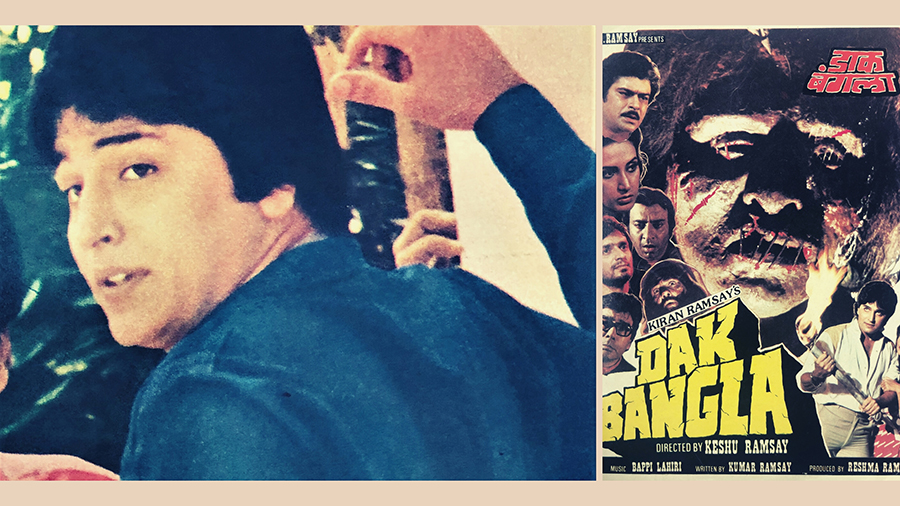 From the family of producer N.N. Sippy, he was first noticed in Awara Baap in the company of Rajesh Khanna, Meenakshi Seshadri and Madhuri Dixit who was cast in a brief role opposite him. He had also worked in the  first Sindhi Cinemascope film Hal Ta Bhajee Haloon made by Satram Rohra (producer of Jai Santoshi Maa) for which Lata Mangeshkar sang her first and last Sindhi song.

He was later sighted in Shoorveer, Patton Ki Baazi, Aadhi Zindagi Aadhi Maut, Anjaam, Sitapur Ki Geeta and Amba, which was his last film. He played a character with grey shades in it. He was also seen in the Ramsay Brothers’ Saamri 3D and Dak Bangla, which did reasonably well. He doesn’t regret turning down Govinda’s role in Ilzaam. Just one of those things ordained by destiny, he feels.

Rajan Sippy directed the multi-starrer Shehzaade with Dharmendra, Shatrughan Sinha, Dimple Kapadia, Kimi Katkar, Jaya Prada and Moushumi Chatterjee, which fared reasonably well commercially. Next, he was scheduled to direct Maharaja with Anil Kapoor and Madhuri Dixit but found himself drawn towards Dubai, where he settled down permanently. The Gulf War had broken out then but the tide eventually turned in his favor.  He organized quite a few star shows like Khan versus Khan with Aamir and Salman, which became a huge success in Abu Dhabi and Bahrain. Also, Dubai became a preferred destination for film shootings.

He handled the shoot of Boom (1991) in Abu Dhabi for his friends Jackie and Ayesha Shroff. In Dubai since the past 30 years, from the plush Media City, he manages investments, film distribution and product promotions. He owned a famous nightclub franchise but as the pressures increased, he sold it five years ago. Apparently, Kalpana Iyer and Sonika Gill helped him in the club project. A father of two daughters, who are married, he keeps in touch with his Bollywood friends like Boney and Anil Kapoor, Jackie Shroff and Govinda and considers Shatrughan Sinha and Poonam as family. He can be found on social media. 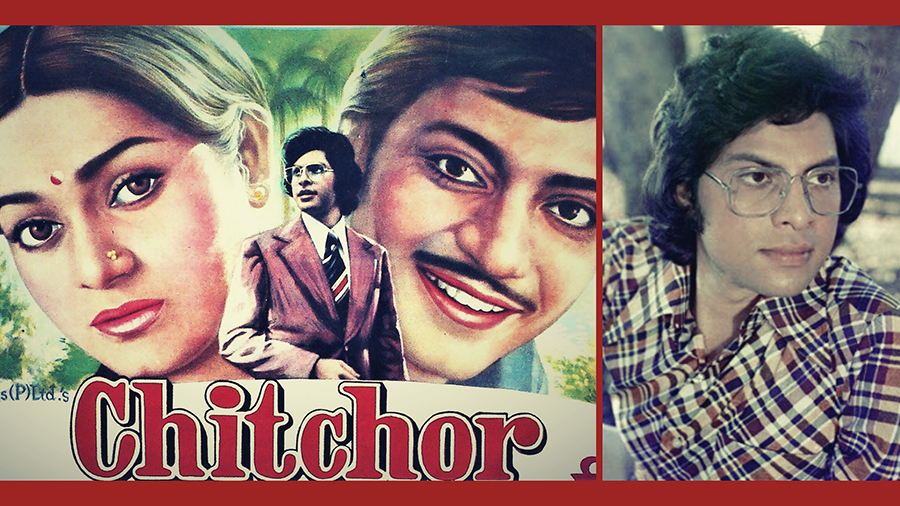 This actor spelt royalty. Son of Princess Sita Raje, daughter of Maharaja Tukori Rao Holkar of Indore, and Col. F.D. Ghatge who was from the Sardar Kagal family of Kolhapur, he joined the Film and Television Institute of India Pune.

He began his career with a striking performance in Basu Chatterjee’s hit Chitchor with Amol Palekar and Zarina Wahab. Erroneously, IMDB cites the Shatrughan Sinha starrer Anokha as his debut film.

In the 1970s he featured in a variety of films. Count among them Agar, Anpadh, Kasme Vaade, Sunayana and Shaayad. The following decade kept him busy with Humse Badhkar Kaun, Kunwari Bahu, Satte Pe Satta,  Shahenshah and Prem Rog to name a few. He switched to negative parts in Jyoti and Razia Sultan. The Ramsay Brothers cast him in their scream-fests Guest House, Veerana, Bandh Darwaza and Aakhari Cheekh.

Classically tall and handsome, he shifted gears to character roles  as in Tridev, Lekin, Souten ki Beti, Jhankar Beats, Devdas and Garv. He moved to television with Singhasan Battisi, Junoon and the popular serial Buniyaad. Today, he lives in Indore, far away from the madding crowd. 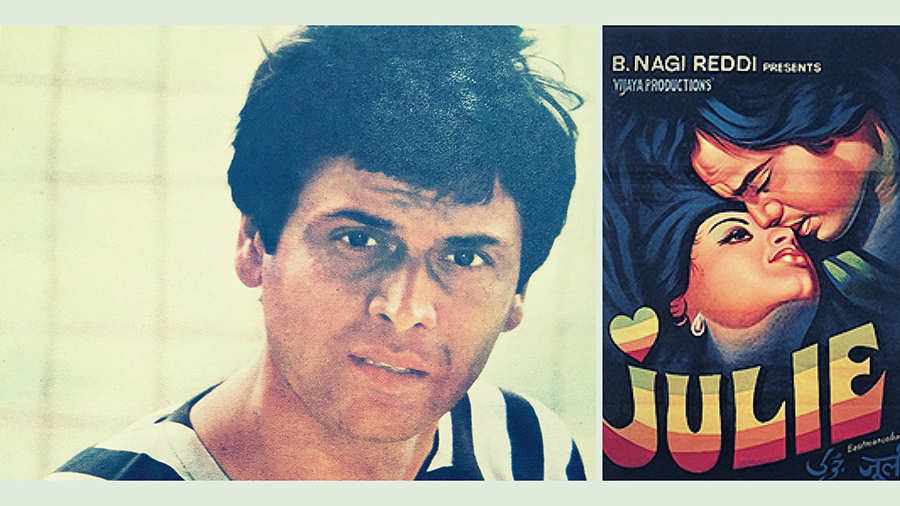 Vikram Makandar popularly known as Vikram started off in Patthar Ke Sanam and played significant parts in approximately 20 films including Jab Andhera Hota Hai, Aadmi Sadak Ka, Call Girl, Ranga Khush, Sankoch, Swami, Charandas and Jaani Dushman etc. His mega- hit proved to be his biggest mistake though; Julie opposite ‘Lovely’ Lakshmi (remake of the Malayalam Chattakari). Lakshmi as an unwed mother, character actress Nadira and Rajesh Roshan’s music score got all the credit for the success. Vikram, on the other hand, began to be typecast as the suppressed, weak-willed stereotype and was mostly offered projects with female-centric themes.

Hence he turned producer with Situm (1982) starring himself Naseeruddin Shah and Smita Patil but there were no instant buyers for the outcome. Today, the Mumbai-based Vikram can be seen on social media platforms and keeps himself busy by running his business and managing his portfolio of share investments. He would need to be lured with a role of substance to return to the studios. 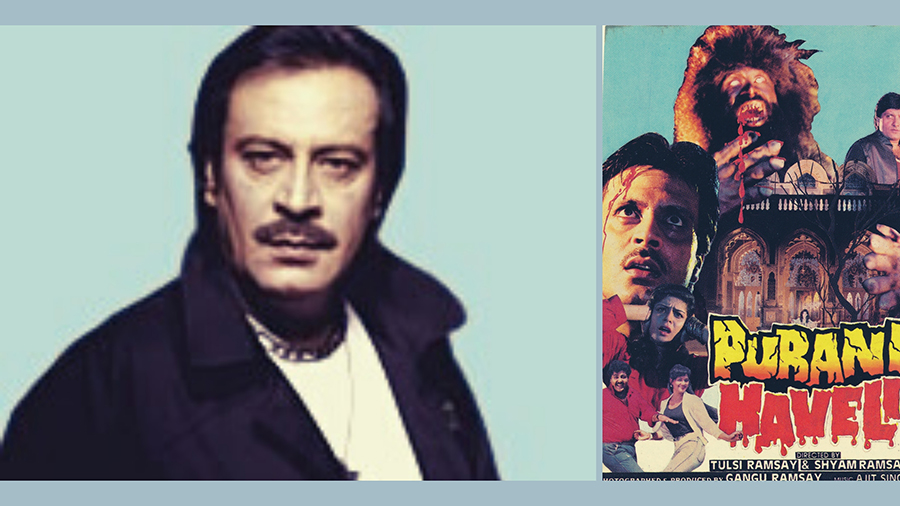 Former model and winner of the Mr. India title, he became the face of Vimal Suitings (Reliance), besides serving as the in-house model of the international brands of Giorgio Armani and YSL for their Indian collections.

When offers from top banners waned, he was seen the Ramsay horror flicks Sanatta, Purani Haveli, Ajooba Kudrat Ka, Shaitani Ilaaka and Aakhari Cheekh. His most prominent performance during this phase turned out to be in Prakash Mehra’s Sharaabi (1984) as Inspector Anwar who sang the hit number Manzilein Apni Jagah Hai Raaste Apni Jagah.

He shifted to television after a near fatal accident in Dubai in 1986. There were serials like Swabhimaan, Chandrakanta, Kanoon, Kahin Toh Hoga and The Zee Horror Show. He was also seen in the first season of the popular show Big Boss. Married in 1985 and divorced, he has a daughter. He was forced to quit his acting career on being diagnosed with cancer. He is cancer-free today and hopes to return to his first love, acting. 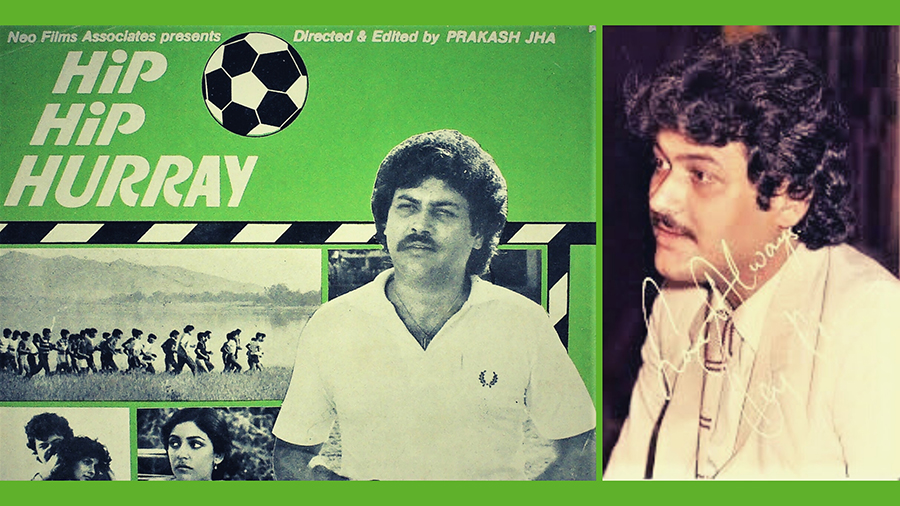 Raj Kiran debuted in B.R. Ishara’s Kagaz ki Nao (1976) opposite Sarika. His gentle personality and low-key acting were his calling cards in Shikshaa, Manokaamna, Maan Abhimaan, Ek Naya Rishta and Hip Hip Hurray. However, he was appreciated largely as a supporting actor in Karz, Baseraa, Arth, Raj Tilak and Waaris .His career began flagging in the 1990s with minuscule roles in Police Public, 7 Bijliyaan and Hatya.

Professional and personal crises drove him into depression. He divorced his wife and had to go through mental treatment. He disappeared and was located in an asylum in the U.S. by his former co-star Deepti Naval. The late Rishi Kapoor was keen to help him and bring him back to Bollywood from Atlanta but it was not to be. Last heard of, he  was working as a cab driver to meet his expenses in the U.S. 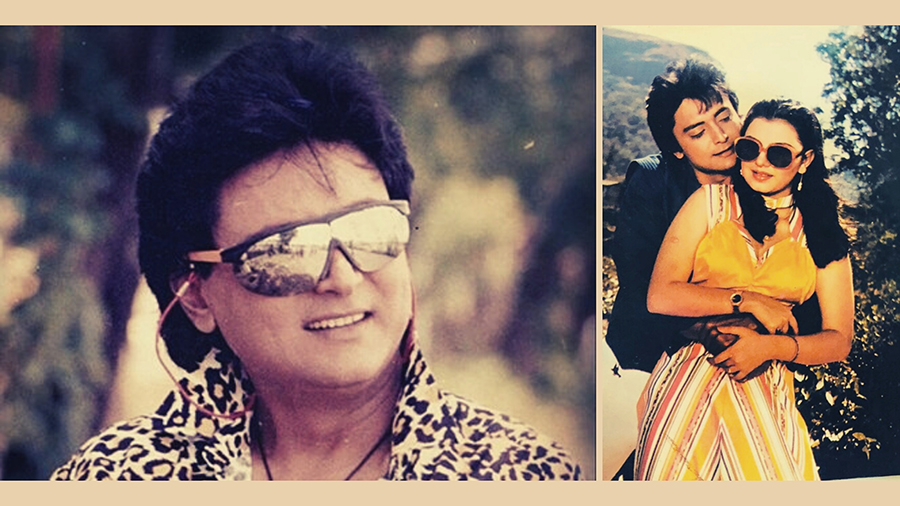 Born in Bhopal, he was a regular in the commercials of Gold Spot, Bombay Dyeing, Arvind Mills and Nescafé. He made his bow in the successful but underrated thriller Apradhi Kaun?, opposite Aparna Choudhary and Rajni Sharma. His second effort Chambal ke Daaku featured real-life dacoits Madho Singh and Mohar Singh playing their own selves. 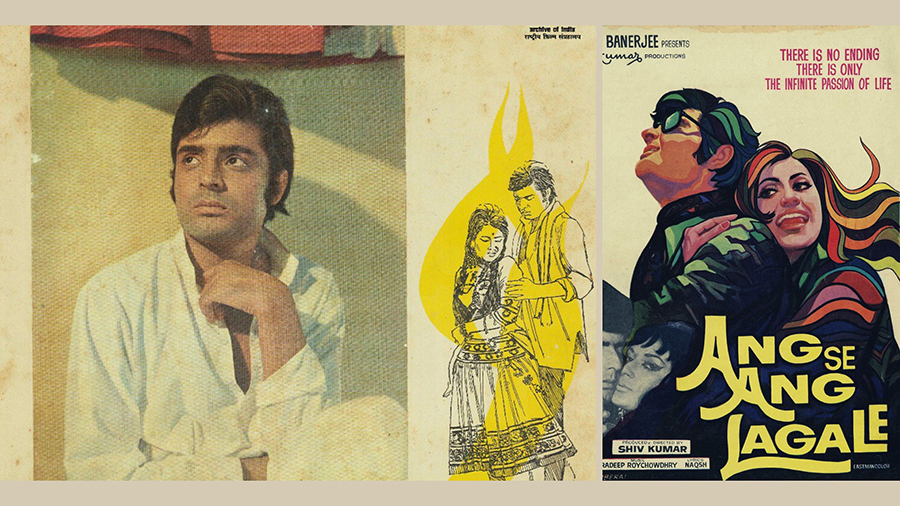 The good-looking Satish Kaul became popular in both Hindi and Punjabi films. Having worked in more than 300 films he was often called the Bachchan of Punjabi cinema. In Hindi cinema, some of his noteworthy endeavors have been sampled in Faslah, Dawat, Ang Se Ang Lagaley, Warrant, Harfan Maula, Karma, Khooni Mahal, Kabristan and Bandh Darwaza.

He portrayed Lord Indra in B.R. Chopra’s magnum opus TV series Mahabharata in 1988. He married and divorced. His wife left him with their only son for the U.S. Presently, he’s struggling to make ends meet in Punjab. His acting school has shut down and he is unable to pay his hospital bills in Ludhiana and is at Vriddha Aashram – an old age home. His former co-star Preeti Sapru has appealed to the government authorities for help. 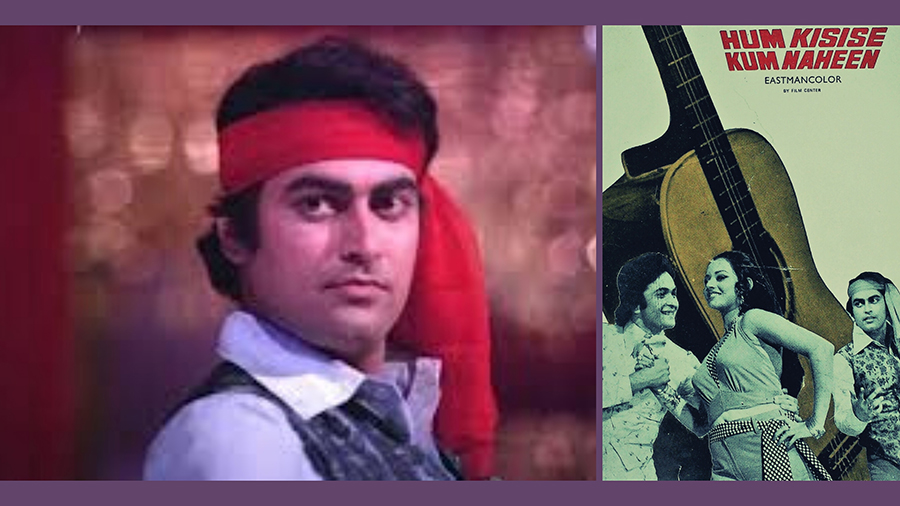 Tariq Ali Khan, nephew of producer-director Nasir Hussain was introduced in the action-packed musical Yaadon ki Baarat. The guitar Tariq carried wasn’t just a prop, at college he was a guitarist with a beat group.  Followed the musical Hum Kisise Kum Naheen opposite newcomer Kaajal Kiran. He was also seen in Zakhmee, Zamane ko Dikhana Hai, Khwaja ki Diwani, Manzil Manzil, Zabardaast and finally in Zevar in 1987 after which he seemed to have quit the industry, presumably because he wasn’t offered any worthwhile assignments. He was seen in Mere Damaad after a break of eight years in 1995. Today, he is said to be working with a hotel in Mumbai. 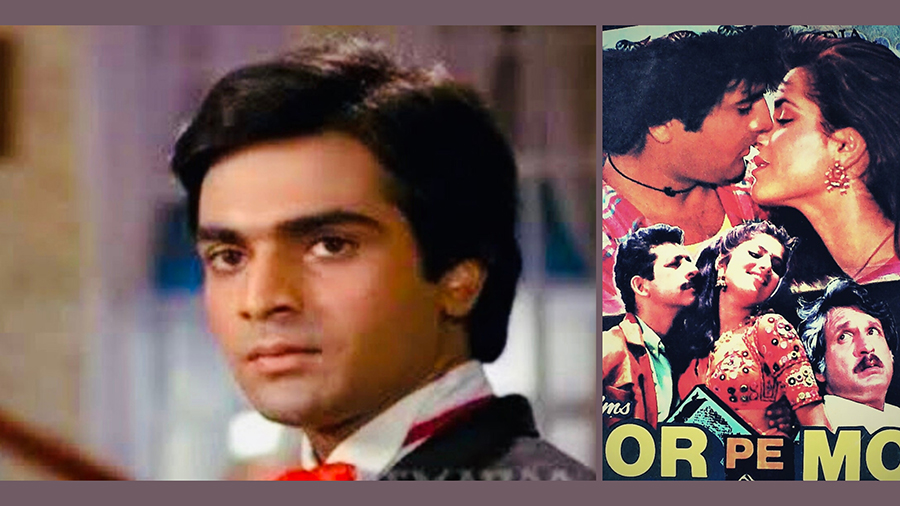 Young and handsome, he made his debut with Jawaani directed by Ramesh Behl opposite the heavily western-accented Neelam Kothari. The love story dealing with a generation gap between youth and their elders was a no-no at the cash counters. Yet the fresh pair was accepted, and Neelam went on to do several top-drawer projects.

Karan, cousin of Tina Munim Ambani didn’t fare too badly for while, showing up in Maha Shaktimaan, Maa Beti, Apna Bana Lo, Apne Apne, and Mahakaal opposite Archana Puran Singh for the Ramsay banner. He ventured into film production with Chor Pe Mor starring himself, Neelam, Sonam and Naseeruddin Shah, which the audience shunned. Today, he dons the cap of a creative producer at Reliance Entertainment and has been active as a co-producer of a number of successful films like Toilet- Ek Prem Katha, Naam Shabana, Baby and Rustam. 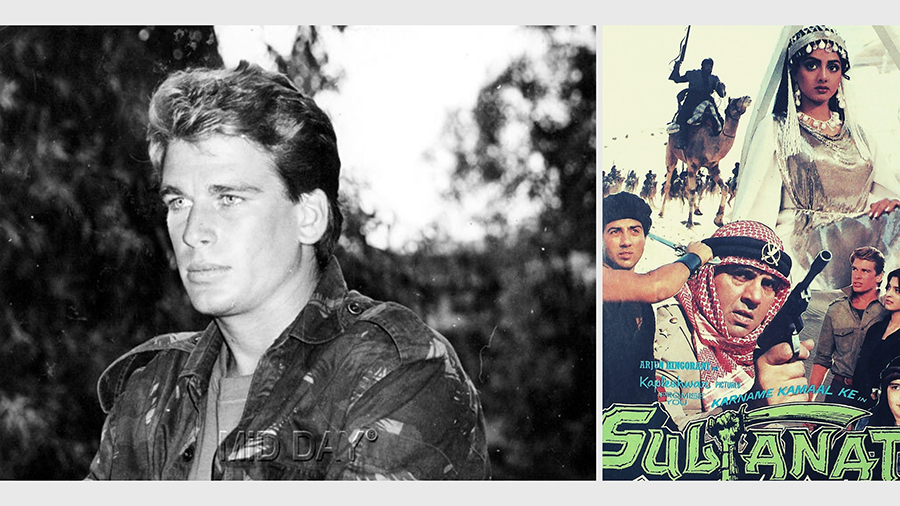 Shashi Kapoor had every reason to be chuffed about being the undisputed Kapoor heartbreaker. In fact, being a father of three children, made no difference to his vast fan following among women.

In the 1980s the focus shifted to his son Karan Kapoor who was macho, terribly elusive and always blushed his way out of awkward situations. He had featured as a kid in brief parts in his father’s productions Junoon and 36 Chowringhee Lane.  It was September 1983 when Sultanat was still in its incubation stage. Mukul A. Anand was hell-bent on adding one more name to the cast of Dharmendra, Sunny Deol, Sridevi and the lately-announced Miss India  Juhi Chawla.

The director was on the lookout for someone to play Sunny Deol’s brother and since it was an Indo-American venture Karan Kapoor fitted the bill. But it wasn’t a cakewalk for Mukul A. Anand as the Kapoor lad gave him a long chase before giving his nod.

Sultanat was still in the making when Karan became famous as the Dream Boy via Bombay Dyeing ads. He was a keen photographer and shot the campaign for the Jalal Agha-helmed Nirvana starring Sarika. He was in the British TV series The Jewel in the Crown. Karan was seen in some B-town productions like Loha opposite Mandakini and Afsar and Zalzala, both opposite Viyayeta Pandit.

Enough was enough for him by then. Based in London, he is married with two children Aliya and Zack. About four years ago, he was in the news for the photo-exhibition Karan’s Time and Tide clicked in various parts of India.