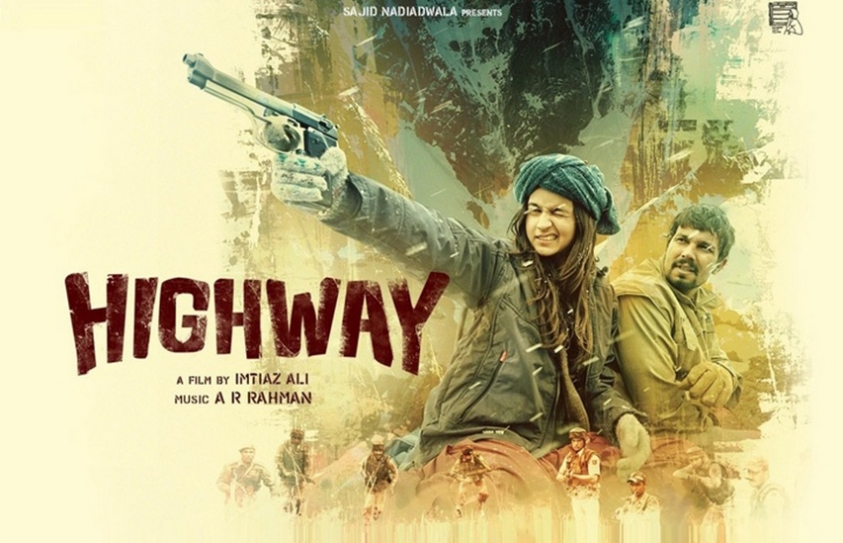 First of all – a standing ovation to Bollywood.  Highway – a very proud moment for Hindi Film industry .

Here is a film with an excellent entertainment quotient and a very apt social topic discussed in a decent way.  Kudos to Imtiaz Ali – one of the top notch directors of Indian Cinema & Sajid Nadiadwala – one of the top most producers who now experimens & believes in sensible cinema with entertainment.

Imtiaz Ali has proven that a social issue can be addressed in a brilliant way in commercial cinema as well.

Highway is a journey of two people from different strata’s of society.

Veera (Alia Bhatt), from a wealthy family and who are very well connected with top level bureaucrats and politics, is kidnapped by Mahavir Bhatti (Randeep Hooda), a dreaded contract kidnapper and killer.

In spite of knowing that he had kidnapped a girl from a very powerful background, who will leave no stone unturned to get to him and his gang; Mahavir is hell bent on going ahead with his plan of getting ransom or selling Veera in a brothel, since he thinks that when rich class people commit atrocities on poor females, the poor should do the same with the rich class people.

Due to the fear of getting caught, Mahavir & his gang keep on shifting their location from one place to another. After the initial fear, Veera starts enjoying this journey and doesn’t want the same to end as she feels much more secured in the company of Mahavir and his gang.

And because of this secured feeling with Mahavir, Veera breaks down and reveals that she was sexually abused many a times in her childhood by one of her uncle and she doesn’t want to return back to her so called society and family where she feels locked in a jail and where even her parents, even after knowing about such incidents, cannot protect her.

The story is suberb and excellently narrated through the journey of the kidnapper and the kidnapped.  The chemistry between Alia Bhatt and Randeep Hooda + his gang of kidnappers is outstanding and seems natural.  Other characters in Randeep’s gang are quite hilarious. Outdoor locations are awesome and very well captured on camera – the rustic narrow lanes of villages, the mountains, the godown where Alia is confined by Randeep looks natural, the highways and above all Shimla scenes.

There are lot of scenes which will make you emotional – Alia Bhatt’s helplessness when she is in the clutches of kidnappers, when she tries to run away from the clutches of the kidnappers but comes back to the kidnappers, when she reveals about her sexual abuse as a child, her outburst (in the climax scene), in front of her family, at her uncle who had sexually abused her when she was a small kid, Randeep Hooda crying when he realizes that he had made a mistake by kidnapping an innocent girl (Alia Bhatt), Alia requesting Randeep to visit his mother after the kidnapping deal is done and Randeep promising her the same.

As usual, A.R. Rehmans music is outstanding and particularly the Patakha Guddi song.

The dialogues are good – particularly when Randeep says – with 1 pistol shot, 2 people die – 1 is the person who is shot and the other is the shooter.

The characters who have played Randeep’s gang members have been selected properly for their roles and have acted very well.

This is Randeep Hooda’s finest performance to date.

Above all, it is because of Alia Bhatt’s innocent looks and brilliant acting; you cannot take your eyes of any scenes in the film.  Other Bollywood Babes – watch out.  A new star actress has arrived.