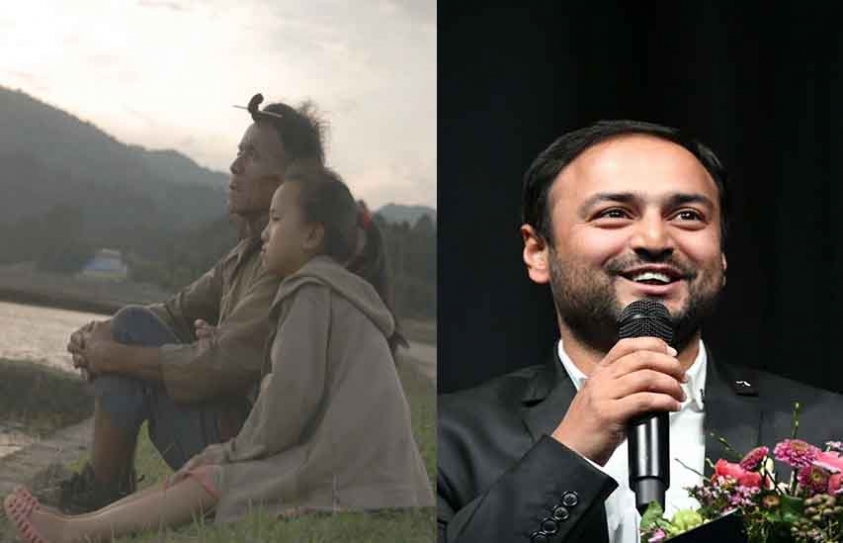 Mumbai, February 20, 2017: Indian filmmakers never cease to amaze the global audience with their storytelling and filmmaking skills. As the Berlin Film Festival drew to a close on Saturday, Indians had a reason to rejoice. Debut filmmaker Amar Kaushik’s short film, Aaba bagged the prestigious award at the 67th Berlin International Film Festival 2017. The unconventional love story won Special Prize of the Generation K Plus International Jury for the Best Short Film of the year.

The film was premiered in the Generation Kplus competition on February 11, 15, 16 and 19, 2017.
Aaba is the brainchild of Amar Kaushik, who has gone full circle in life before penning down this moving tale about a man on the edge of his death bed. Produced by Raj Kumar Gupta and Mitul Diskshit and co-produced by Onir and Alison Welly, the film was shot in Apatani language in Ziro district of the picturesque valley of Arunachal Pradesh, with a cast comprising locals of the state. The story revolves around an orphan girl who comes across the news of her grandfather reaching the terminal stage of lung cancer. As the grandfather (Aaba) starts counting his days, the family faces unexpected turns.

Expressing happiness on receiving the award, Amar Kaushik said, “Aaba is my first film as a director and the project is very close to my heart. Being awarded at the Berlin Film Festival for Aaba has given me moments that I will cherish all throughout my life. This award is for my entire team without whom, this would not have been possible. Special thanks to my mother for sharing such a wonderful story with me and to all my producers for placing their trust in me.”

The producers were confident that the heart-rending story will strike a chord with the audience. From the locations, situations, people and expressions, Amar has put his best foot forward to replicate his imagination into this film. The confidence that Raj, Onir and Mitul had in ‘Aaba’ has clearly well paid off, as the premiere of the film at the 67th Berlin International Film Festival received amazing response, followed by the award on Saturday evening.

Commenting on Aaba’s success at Berlinale, producer Raj Kumar Gupta, said, “I feel very proud and am elated that our film has won at such a prestigious festival. It was a script that had moved me and I decided to produce it along with my friend, Mitul Dikshit. Congratulations to each and every team member who made this film happen.”

About Amar Kaushik
Born in 1983 in Uttar Pradesh, India, Amar Kaushik grew up in Kanpur with his grandparents and the north-eastern state of Arunachal Pradesh, where his father worked in the government’s forest department. He completed his graduation in Science with an aim to join the Indian Air Force, only to slowly realize that it wasn’t his real calling. Amar’s fondness for travel made him take up a job in a marketing firm related to tours and holidays.. Now, selling involved telling stories and all the story-telling inevitably led him to Mumbai.

With no backing or support from the film industry, Amar is a self-made artiste, who spent 10 years climbing his way up the ladder from being an assistant director to associate director to a second unit director, while working with some of the best minds in Bollywood. He started his career with Miditech and worked on the very popular television shows. He got his first break in films with Raj Kumar Gupta’s ‘Aamir’ where he worked as an Assistant Director. He continued working with eminent directors like Onir, Raj Nidimoru and Krishna D.K among others and has been part of many films including Sorry Bhai, Go Goa Gone, Fukrey, No One Killed Jessica, Ghanchakkar etc.

In 2016, Amar made his first short fim ‘Aaba’ based on a true story that he had heard from his mother as a child while growing up in Arunachal Pradesh. The film is selected to be premiered at the 67th Berlin International Film Festival, which is amongst the most prestigious film festivals in the world. The film will be premiered in the Generation Kplus competition on February 11, 2017.

Amar is currently working towards his first feature film.