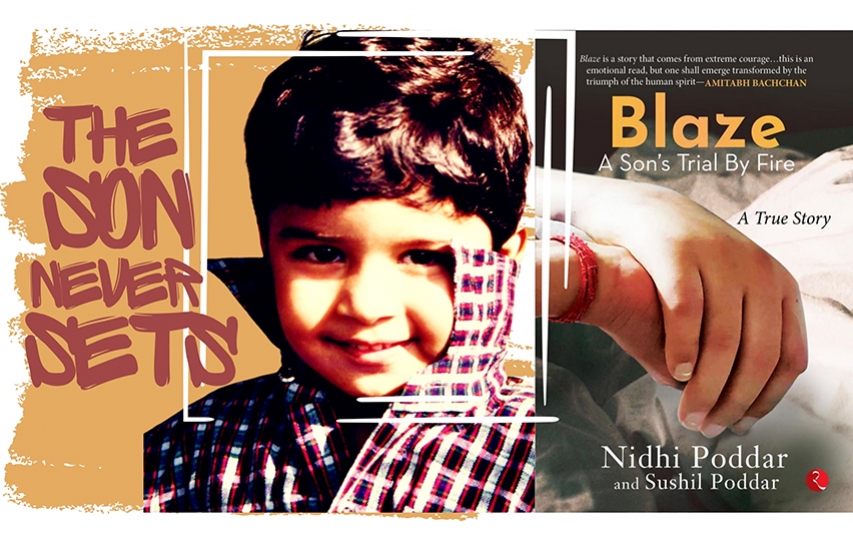 Here’s a book by first-time authors Nidhi and Sushil Poddar. With utter sincerity, with words, which alternate between the deeply personal and the haplessly stoic, they have chronicled the loss of their 22-year-old son, Divyansh Atman aka Manu. After an unwavering combat war for 10 years, he succumbed to leukaemia at the age of 22, a little over two years ago.

Page after page, Blaze: A Son’s Trial by Fire draws you into the seams and folds of the life of a bonded family, which can never be the same again. Written in one go during the early months of the lockdown following the COVID-19 virus pandemic, the outcome is far from being therapeutic for the Poddars, in their 40s. More than that, it is a reaffirmation that Divyansh has not left the building, that his presence will be eternal - as much for the readers as for the parents.

In person, the Poddars appear to be quite polar opposites in their temperaments and instincts to adapt to the departure of their child - now their prime raison d’etre to carry on regardless with their everyday lives.

Nidhi Poddar, as the central voice, strikes us as the more vulnerable and wears her emotions on her sleeve, while her husband, a senior government officer by the very dint of his profession, is retentive (perhaps deceptively so). Not given to public display of affection, his hugs, smiles, tears and laughter were rationed out, inevitably because the son, who considered his father a role model, couldn’t show any signs of weakening, of surrendering to the ordained. 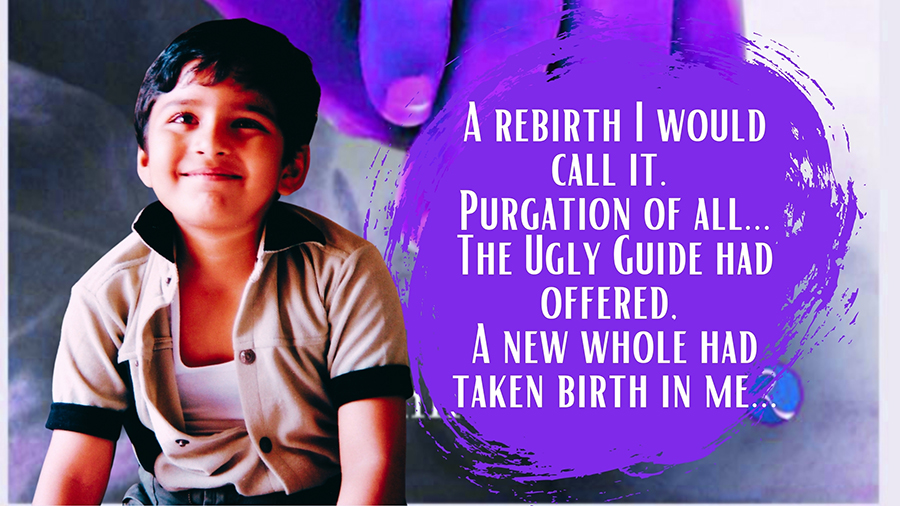 During the decade-long valour displayed by Divyansh right from his pre-teens, he would write short stories and poems, besides excelling in his studies, sitting for his examinations after being driven to the school from hospital. There were instances when his innate sense of humour would come to the fore. Like the time when he couldn’t read a text out loudly enough in his classroom. On being reprimanded, he firmly shut all the windows and began again. Even the presiding teacher couldn’t suppress his shabashi.

Rightfully, the narrative is constructed from the throbs and anxieties of the mother and not from a partriachical perspective, which continues to prevail in the grid of our societal tradition. Evidently, Sushil Poddar and his homemaker wife have shared a relationship of seamless equality.

Moreover, the mother doesn’t hold back her truthspeak, disclosing some errant vignettes. For example, when Divyansh was a little boy and had annoyed his father by indulging in some harmless mischief, he was pulled by his hair and told to behave himself. The father regretted the incident immediately, chastened by the fact that the child had said, “But you could have just slapped me across the face.”

Many of the beautiful notes, which Divyansh would hand over bashfully to his parents, are heart-wrenching. Especially the one in which he noted that before he was diagnosed with leukaemia, she (his mother)  had been a tad unfair to him, apportioning her love and time more towards Ananya, her second-born. Once he was diagnosed with a terminal illness, she didn’t hold herself back from him to the slightest degree. That note was written close to Christmas day, with a joyous sign-off that the mother’s return back to the normal days, was the best gift Santa Claus could have ever given him. 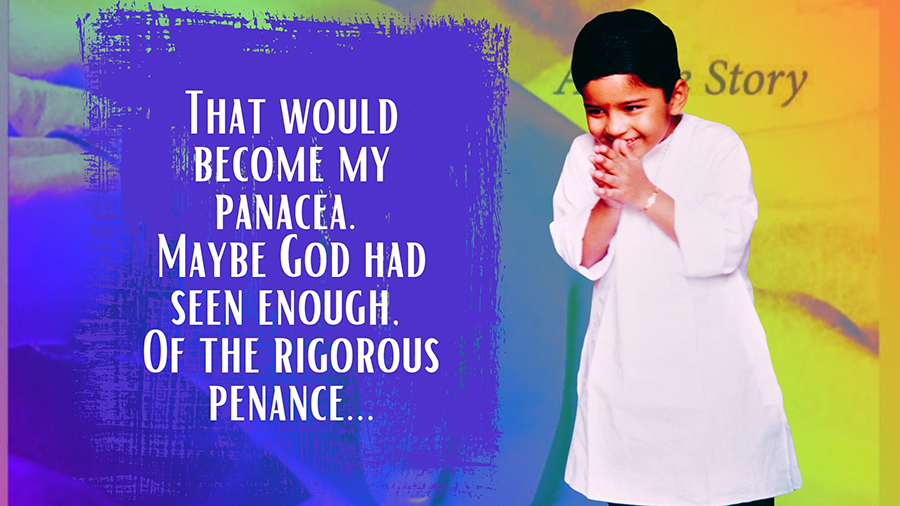 As much of a believer in fantasies, the rational and the scientific, Divyansh would not give up his dream of joining the Massachusetts College of Technology in the U.S. Even as he was taken to Jerusalem and then to the U.S., for his line of medical treatment, the boy  in his late teens stuck to his resolve, convinced that there would be a glowing light in the world of the steadily engulfing darkness.

To the authors’ infinite credit, at no point do they cover him with the mantle of a superhero. Theirs was the quintessential nuclear family - with its roots in Patna, a sojourn in Calcutta and their final stop at the Hyderabad House Colony facing the oceanfront of Napean Sea Road. Mumbai.

If I bring up the Mumbai address, it’s only because I spent my growing up years in the compound and gardens of this colony since I stay closeby. At a whim, on hearing the music of The Doors and Pink Floyd, emanating from an apartment of the colony, I had rung the door-bell to meet Mukund Thapa and shared our delight in being besotted by rock music. That friendship has lasted for decades - even if Mukund, a mathematics wizard, is now settled in the Silicon Valley of San Francisco. Perhaps, I could have requested Mukund to take care of Divyansh and keep in touch with him by mail. I’m afraid, so many what-ifs spring to mind.

I am aware that I digress here. The reason is Poddar Jr was as much of a prodigy as Mukund, besides being a voracious reader, music aficionado and displaying a flair for culinary skills. That he was a companionable soul is vivified by the fact that he had two close friends, the trio being as high-spirited as The Three Musketeers from Alexandre Dumas’ classic 19th century adventure book. Some relatives and neighbourhood kids, as the authors point out, may have shunned him. The Poddars were disturbed but their son took the aloofness in his stride bravely. No complaints, no recriminations. 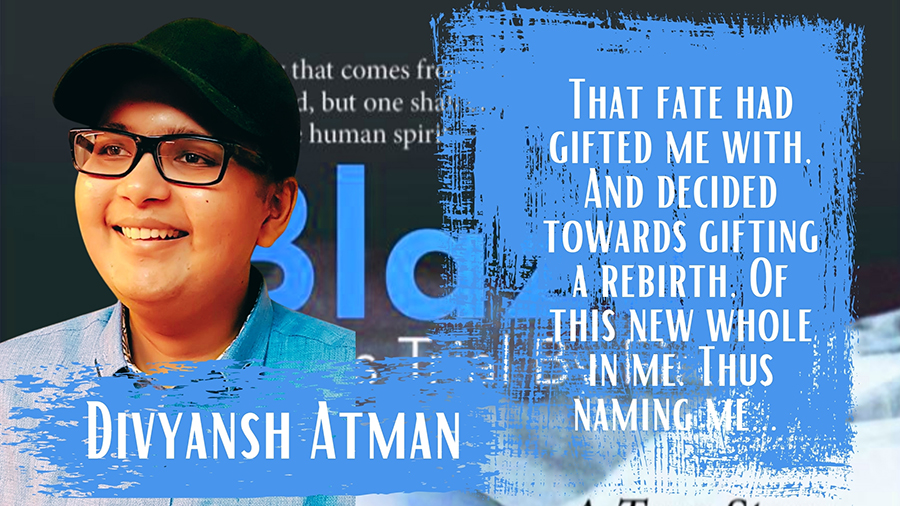 Throughout the course of the meticulously edited and designed 326-page book, ending with a photograph of a smiling Divyansh in a cap, we are introduced to some of the extended family members that were constantly supportive, to his educators who recognised his boundless talent and above all, to the St. Mary’s School teachers and principals, who saluted his uncrushable morale and will power. It’s a story, all too real, which restores the reader’s faith in humanism. Truly if that humane quality wasn’t embedded in all of us, where would it be? - a question that now resonates with  exacerbated anxiety and dread every ongoing day of the pandemic.

Again, this may be just my take. Yet I can’t help feeling that there’s a re-play of Hrishikesh Mukherjee’s Anand (itself inspired by Akira Kuroswa’s classic film Ikiru). Anand had resolved to grab every day as it came, and when the end arrived, he left us with his memory.  Admittedly, a comparison is far-fetched. The case study of Divyansh Atman is way more complex and real than what a film could have informed us. Fortuitously, the book by its relentless detailing of a perfect family confronted by the spectre of a tragedy, is a significant work, a must-read for anyone who, however cynical, is receptive to a story that is vaulting, inspirational and uplifting.

No parents can ever say farewell to their child. The Poddars have not bid him a facile good bye. Rather, the boy who radiated brilliance from every pore, is still with them - not as a memory which can fade away but as a living presence that will always be there, pottering away at his books, laptop or music system.

To quote an excerpt from one of Manu’s poems titled Rebirth:

The name can be roughly translated as: Part of the Divine Light. The Real Self, the Real Soul. Manu had the foresight to say that himself. And his mother, Nidhi, has reiterated that in a soft-spoken yet articulate voice, for all  of us to understand how to come to terms with a loss, if we ever can.