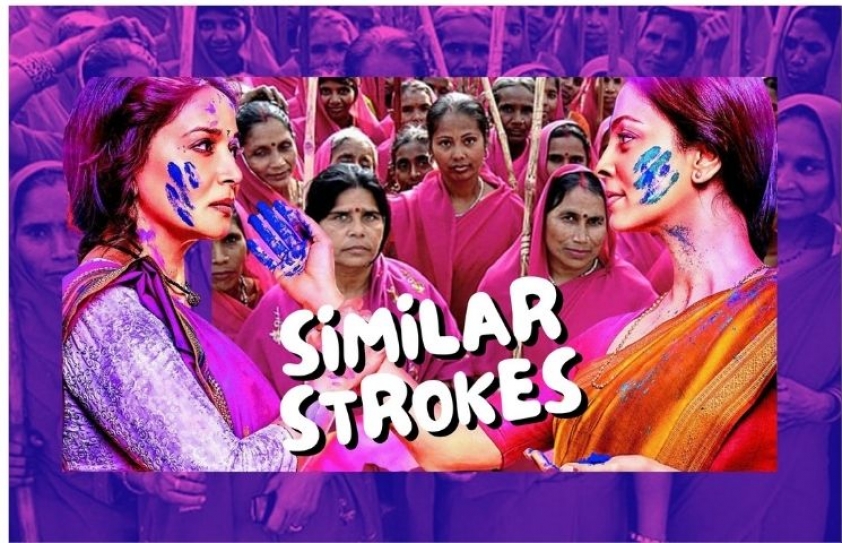 Call it a coincidence or plain copycatting. Film historian, Dhruv Somani, writes on the curious clashes between Bollywood filmmakers who have tackled the same subject or storyline simultaneously.

‘Great minds think alike’ goes a proverb. When applied to Bollywood, it can spark major controversies. Down the decades then, we have witnessed the acrimony between filmmakers who somehow simultaneously land up working on a similar theme or storyline.

Occasionally, producers have scrapped projects to avoid a clash. More frequently, throwing caution to the wind and to assert their ego, films narrating the same story, have been released, thereby eating into one another’s ticket sales. By the way, copyrights are a dodgy issue, since the tendency is to avoid prolonged court cases. So the wheel of ‘thinking alike’ spins on.

For example, there was a face-off between Nishtha Jain’s documentary Gulabi Gang (2012) on Sampat Pal Devi, founder of the vigilante movement in Bundelkhand Uttar Pradesh and Madhya Pradesh. Quick on its heels, came Soumik Sen’s Gulaab Gang featuring Madhuri Dixit and Juhi Chawla, which may have picked up a National Award for the Best Film on Social Issues but was a downer at the box office.

For this Sunday, here’s a pick of 10 instances of films, which faced the same ‘copycat’ dilemma: 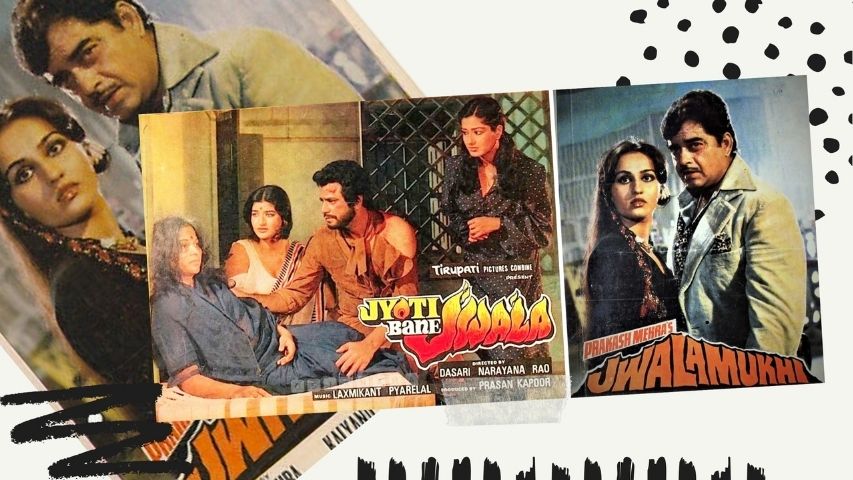 Prakash Mehra would often inquire about the status and progress of his competitor from Vinod Mehra, which would make the actor uncomfortable at times. Jyoti Bane Jwala released first and proved to be successful while Jwalamukhi was delayed because of the disappearance of its heroine Parveen Babi. Reena Roy replaced her but it was much too late. The outcome tanked. 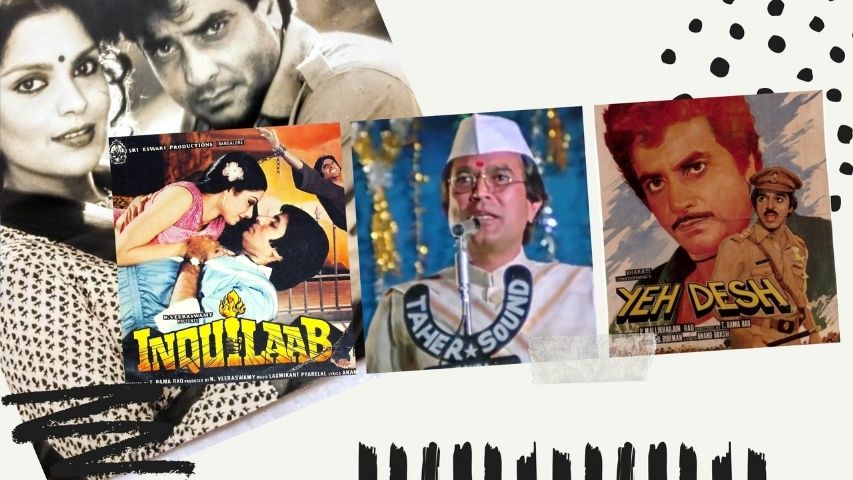 Inspired by the Telugu film Eenadu (1982), all the three were based on the theme of political corruption. Director T. Ramarao directed both Inquilaab and Yeh Desh. Hyderabad’s Padmalaya Banner was upset with him for giving preferential treatment to Inquilaab starring Amitabh Bachchan and Sridevi over Yeh Desh top-lining Jeetendra and Zeenat Aman (again brought in after the disappearance of Parveen Babi).

As for Aaj Ka M.L.A. Ram Avatar, with Rajesh Khanna, Shatrughan Sinha and Shabana Azmi, Dasari Narayana Rao directed it. There was a three-legged race of sorts to reach the finishing line. No point. Inquilaab released first but the masses as well as the mandarins thumbed all the three down. 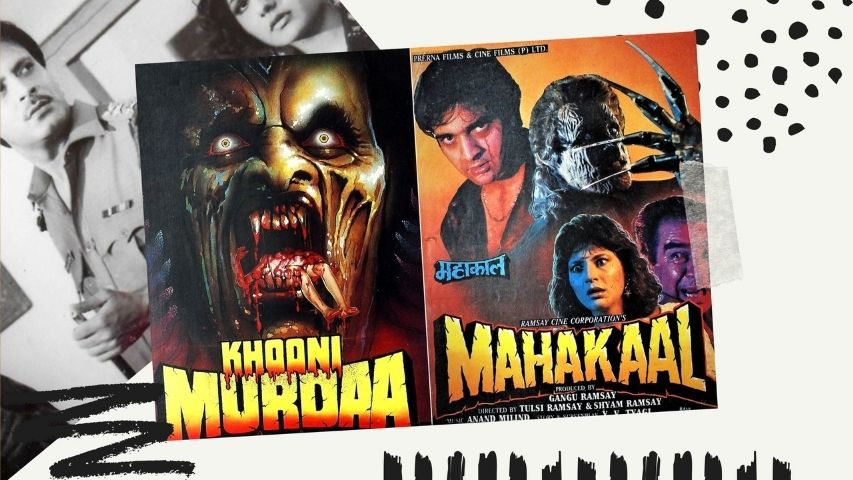 Both were inspired by Hollywood’s horror classic Nightmare on Elm Street, even carbon copying some of its scenes brazenly. Khooni Murdaa released first. The Ramsays smartly staggered the release of Mahakaal right to 1994.  Both the desi Nightmares were hits. 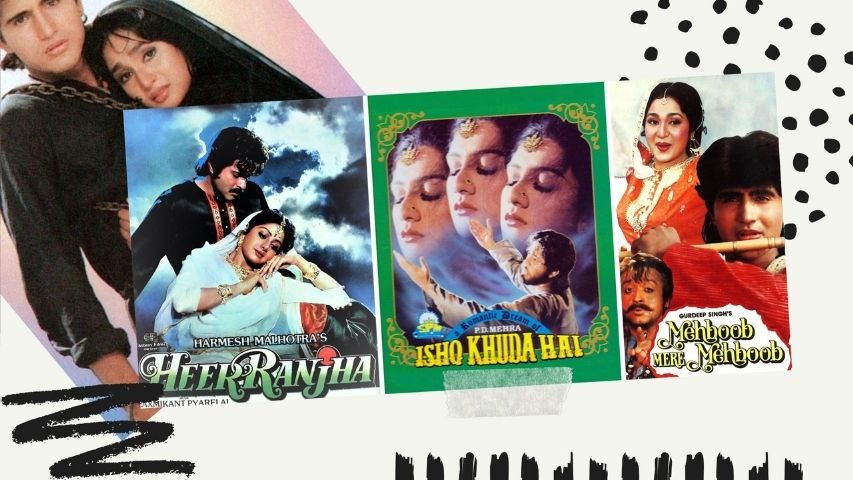 All the three, launched around the same time, were inspired by the legendary love story of Heer Raanjha, which had already been poetically rendered by Chetan Anand with Raaj Kumar and Priya Rajvansh.

All proved to be non-starters at the ticket windows. Incidentally, after the success of Sohini Mahiwal, the F.C. Mehra banner was  keen to remake Heer Raanjha with Sunny Deol and Poonam Dhillon but the project went under the cracks. 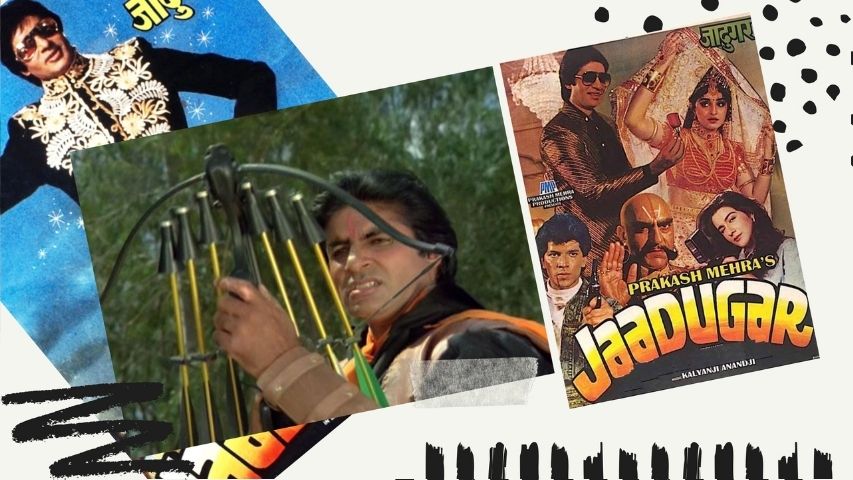 Amitabh Bachchan’s pet directors Manmohan Desai and Prakash Mehra launched Toofan and Jaadugar respectively. But zindagi ittefaq hai maybe… the superstar was to portray a magician in both the projects. Prakash Mehra was vocal about his disappointment and felt cheated, saying Bachchan should have informed him about the similarity.

Desai’s Toofan released first. Again this turned out to be box office poison. Both the films were duds. Not surprisingly, this was the last collaboration between Bachchan and Mehra who had given him first whopper hit Zanjeer. 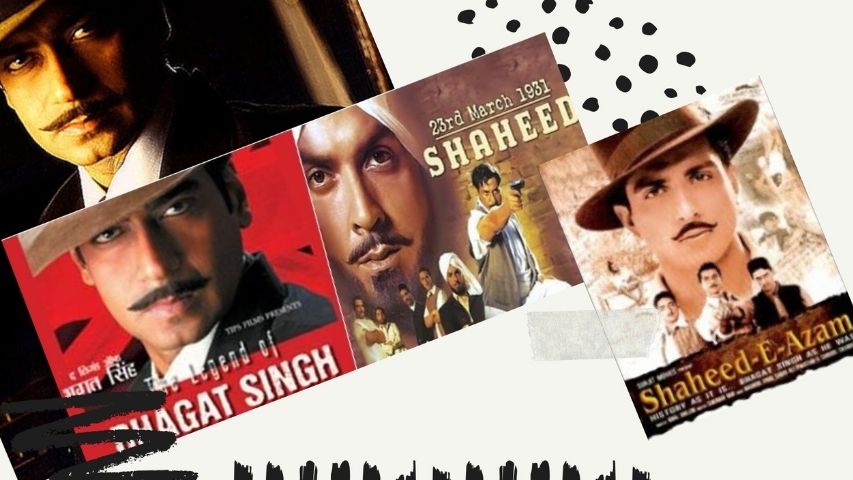 Bhagat Singh had sacrificed his life for the freedom of India from the British Raj. He was just 23 years old when he along with Sukhdev Thapar and Shivaram Rajguru were hanged on 23rd March 1931. Manoj Kumar had already portrayed him in a black-and-white biopic titled Shaheed (1965).

Evidently, the iconic freedom fighter’s had to be re-told. Rajkumar Santoshi directed the Legend of Bhagat Singh. It began with Sunny Deol but he walked out citing creative differences and was replaced with Ajay Devgn. The ensemble cast included Sushant Singh, D. Santosh, Akhilendra Mishra and Amrita Rao.

Simultaneously, Sukumar Nair’ Shaheed-e-Azam featured the then-newcomer Sonu Sood as the martyr. Since the three films were released in very close succession, they turned out to be commercial downers. The only upper was the fact that Rajkumar Santoshi’s take was bestowed the Best Hindi Film National Award and Ajay Devgn won the Best Actor National Award. 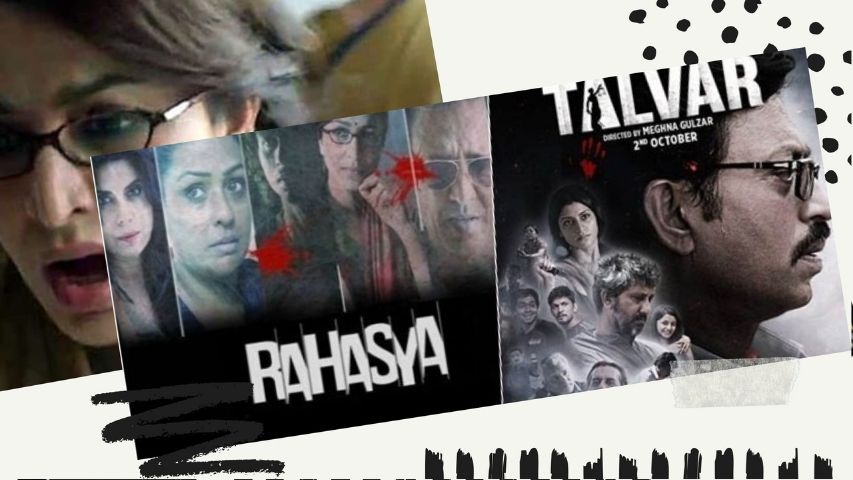 Both the films clicked, perhaps because their directorial treatment was different. Manish Gupta’s Rahasya was designed as a whodunit while Meghna Gulzar’s Talvar, opted for a more realistic investigative style. 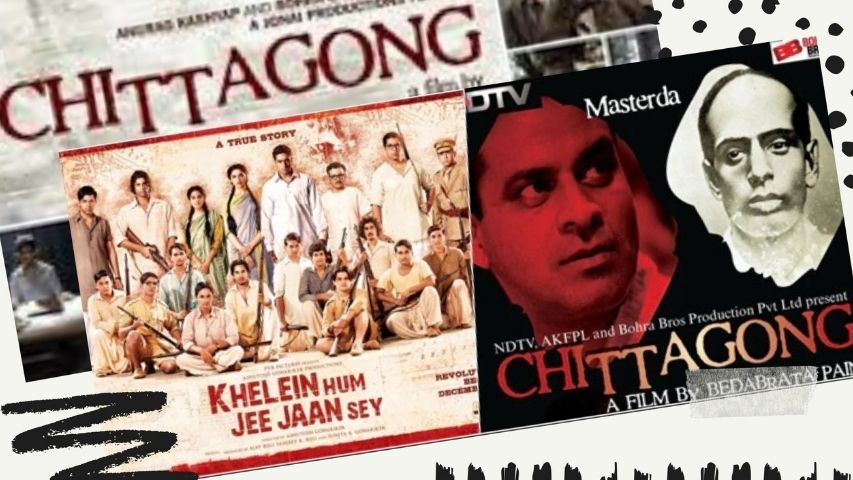 Bedabtara Pain’s Chittagong, with Manoj Bajpai, Barry John, Nawazuddin Siddiqui, Raj Kumar Rao and Jaideep Alhawat, also revolved around the subject of the Chittagong Uprising. A far superior film with fine performances, its release was stalled for unknown reasons. Both the films failed to make an impact. 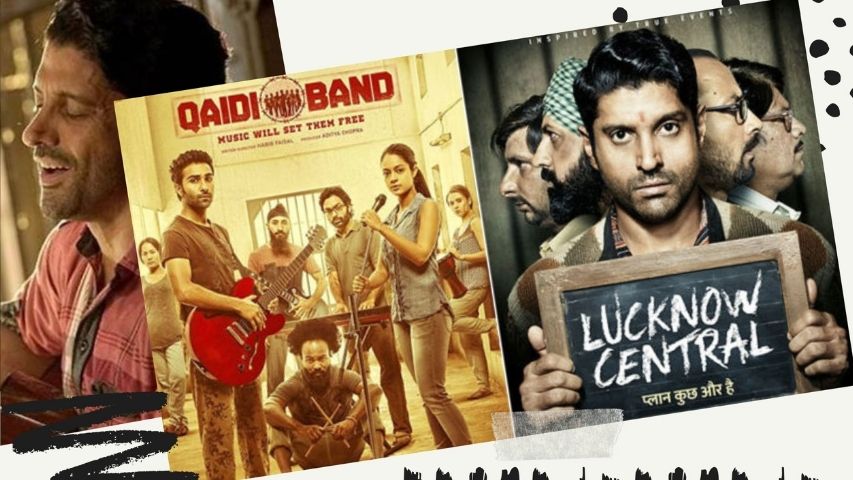 The Yash Raj banner and Viacom both began projects which were on the same lines. Yash Raj’s Qaidi Band introduced Aadar Jain (grandson of Raj Kapoor), opposite newcomer Anya Singh.

Meanwhile Lucknow Central starred Farhan Akhtar and Deepak Dobriyal. The scripts revolved around a bunch of under-trials who form a rock band, so as to escape from jail somehow. Neither made ripples, commercially or critically. 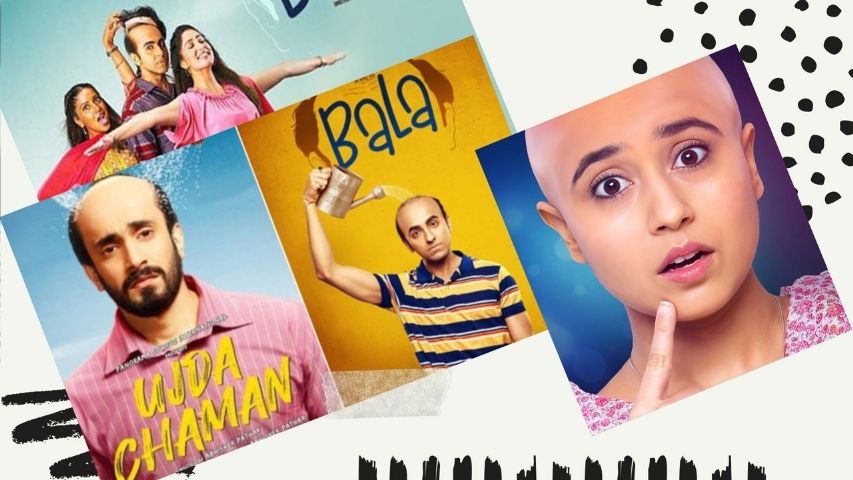 Premature balding was their common theme. Ayushmann Khurrana’s Bala was the most awaited among the trio but it was the Sunny Singh starrer Ujda Chaman, which released first. Its producers even slapped a legal notice on the makers of Bala as they had the official rights of the original source, the Kannada film Ondu Motteya Kathe.

Kesh Gone was a film released on a similar subject in 2019 with the main protagonist being a young woman (Shweta Tripathi) who goes bald. Of the three projects, only Bala managed to attract a semblance of public curiosity.