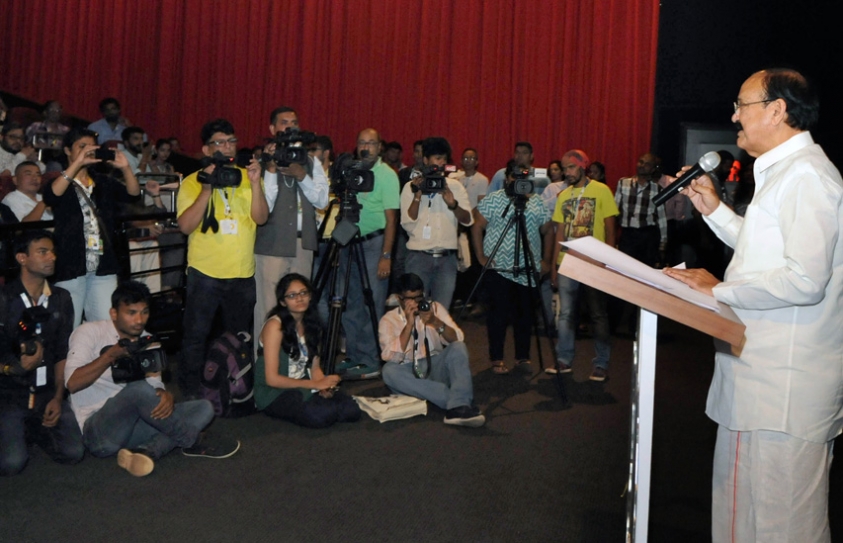 For the second consecutive year Panorama opens with a Sanskrit film

The day after the grand inauguration of the 47th International Film Festival of India in Goa, the Union Minister for Information & Broadcasting Shri Venkaiah Naidu opened the Indian Panorama featuring 26 feature and 21 non-feature films. Complementing the Indian film makers for their story telling ability, Shri Naidu said “we are here today to celebrate the boundless power of the creative medium of cinema”. He further said that Indian Panorama presented a platform for young, aspiring and independent film makers from India to showcase their craft to an audience from across the world. Shri Naidu said the Indian Panorama 2016 had extended entries to uncensored films as well with an aim to encourage the participation of latest films from across the country.

Sanskrit film ‘Ishti’, directed by G Prabha is the opening Feature film of Indian Panorama 2016. It is set in the mid-twentieth century Kerala, when young Namboothiri Brahmins successfully challenged the orthodox, patriarchal traditions of a Brahmin community. Consecutively it is for the second year where a Sanskrit film has been chosen as the opening film of Indian Panorama.

Manipuri film ‘Ima Sabitri’, directed by Bobo Khuraijam as the opening Non Feature film of Indian Panorama 2016. The film is an intimate portrayal of Sabitri, who is an Indian stage actor and one of the notable theatre personalities in Manipuri theatre and married to Late Heisnam Kanhailal her theatre associate and fellow Padma Shri Awardee. Indian Panorama this year has 5 entries from the North East.

Speaking on the occasion, Chairman of the Feature Film Jury Shri Rajendra Singh Babu said “the jury was impressed by new subjects, new ways of story telling, not only by the veterans but also by the high talented young directors”. Mr. Babu further suggested that since the number of entries under Indian Panorama is ever increasing, a two tier- primary and final, selection process should be evolved.

Non Feature Film Jury Shri Arvind Sinha said “we got to see some very interesting films from young film makers giving an overview of many issues and cinematic forms. Some exceptional films from the North East made the cut including the opening film ‘Ima Sabitri”. The selection was truly panoramic