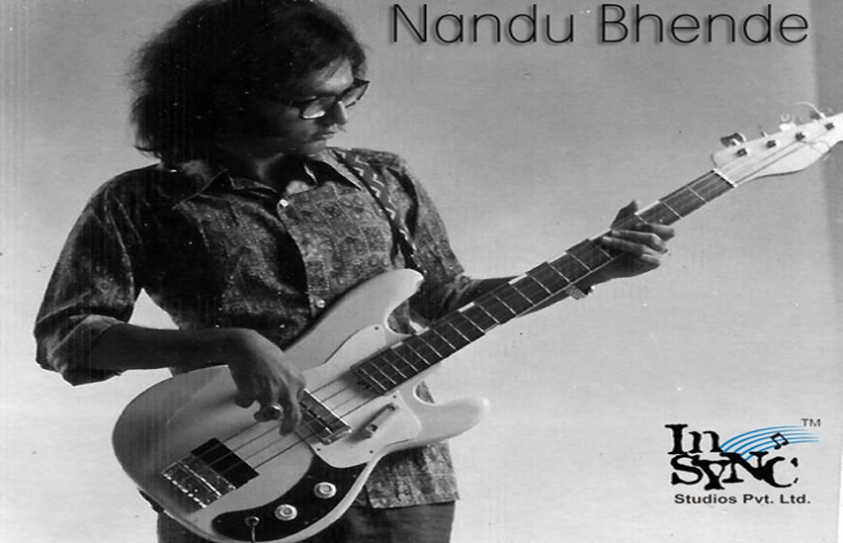 Woodstock and Nandu Bhende are inextricably linked in my memory. When the film was showing at Bombay’s Eros Cinema, teenaged audiences filled show after show for its entire run. Sure everyone saw it two to three times at least. But Nandu Bhende saw it every day of its run (maybe barring Sundays) in the first show of the day. He had to pass by Eros to get to his college, but once there his legs moved no further; by the time the show was over,  so were his classes,  maybe. His wife Usha, a classmate had reiterated this story.

Being a groupie of Riot Squad, one of the bands that rocked Bombay in the 1970s, I was familiar with Nandu Bender’s vocals and musicianship,  often the Riot Squad too would be playing at Beat Shows, as they were called then and the Simla Beat Contest rounds  at the Bhulabhai Desai Auditorium (now defunct) and  Shanmukhananda Hall. Nandu was a crowd favourite at Blow Up, Taj’s discothèque, the floor would be overrun at the last dance with Nandu’s signature Knights in White Satin.   The bushy haired bearded rock musician coveted the role of Judas in Alyque Padamsee’s production of Jesus Christ Superstar. He captivated theatre audiences, including middle aged mothers with his sheer voice presence with Heaven On Their Minds. His was an authentic voice for music theatre.  Only recently, I heard that the theatre veteran was planning to revive JCSS. Who would fill Nandu’s shoes? Even though Rahul DaCunha presented JCSS, I forget who played Judas? Was it Vishal?

I reconnected with Usha and Nandu years later. By then Nandu had his studio. Their daughter Amrita had cut her album. But the old spark for music and live shows was still gleaming in him. I was heading the PR division of a media company, when he was performing for a club nite at a South Bombay club; the events arm of the company was managing it. The huge revolving dance floor was moving, but no one got up to dance. Once Nandu took the stage, the floor started   filling up. Nandu Bhende could still hold the crowd just as he had in the 1970s-1980s. Requests went up for Heaven On Their Minds and Knights in White Satin. He was a true crowd pleaser, as he obliged.

When Lillete Dubey presented Jaya, a view of the Mahabharat through the eyes of Yudhistar, with music, mime and dance, she entrusted Nandu to play Yudhistar. The outdoor performances in Bandra Reclamation and Horniman Circle featured some of the city’s best singing talent and artistes. I was hearing Nandu sing live after a long time. He was easily the best that night, at Horniman Circle. He took the younger voices to the edge, with his remarkable voice and technique. He was among the few rock performers who used his diaphragm whilst singing and the proof was that night no one saw a taut muscle on Nandu’s neck. A friend, who was with me that night, would come readily for any event or club night at Not Just Jazz By the Bay when I would mention that Nandu Bhende was   singing. I didn’t know then that by missing the Blue Frog appearance, I was depriving myself of  hearing Nandu Bhende that one last time.

Despite his fine musicianship and his commanding presence, Nandu Bhende was never critical or envious of others. Once, we were talking about Credence Clearwater Revival, and I mentioned about a wannabe singer who was claiming he was going to be the first Marathi rock singer. Usha interjected: “Excuse me, does he know that Nandu Bhende is the first one there.” Nandu remained silent and, embarrassed. I then remarked that the same wannabe…. didn’t know who the Fogerty Brothers were or what CCR stood for. Nandu merely smiled, but said not a word. Such grace.

On a visit to Toronto in 2007, during the Earth Day Live concert, I saw a white haired guitar holding man wearing a tee shirt with a legend: Old Rockers Don’t Fade, They Just Die. Nandu Bhende, our original rock star didn’t fade, he just left for the stage beyond…