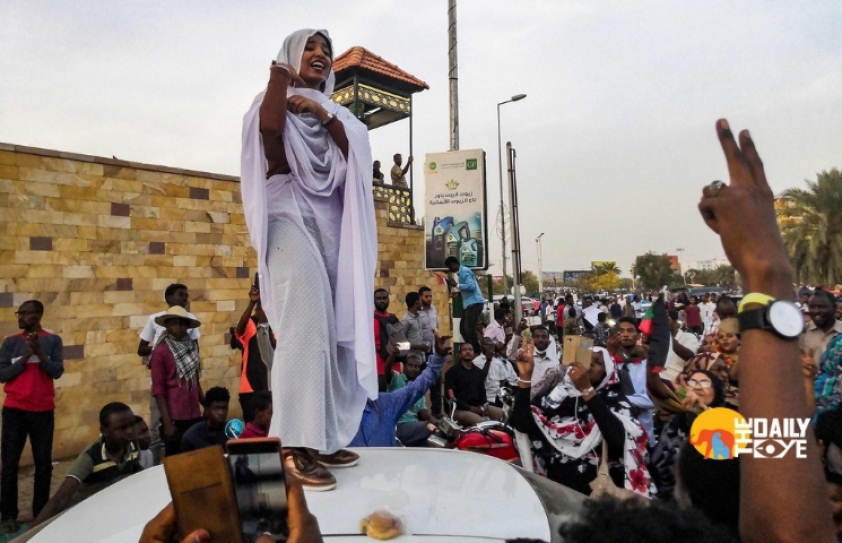 On the 8th of April, an image of a young woman standing above a crowd in Khartoum, Sudan went viral among social media. As tens of thousands crowded the roads in front of the heavily guarded complex - headquarters of the military and the feared intelligence services, the woman was an icon of protest.

The lone woman was observed to be dressed in traditional white attire with gold moon earrings as she sang and chanted slogans against the government.

Lana Haroun reported to the CNN, that she had taken the picture. “She was trying to give everyone hope and positive energy and she did it,” she said. “She was representing all Sudanese women and girls and she inspired every woman and girl at the sit-in. She was telling the story of Sudanese women... she was perfect.” She added: “We have a voice. We can say what we want. We need a better life and to stay in a better place.” She said when she saw the photo on her phone, “I immediately thought: this is my revolution and we are the future.” Netizens around the world have been lauding her bravery and many artists were inspired by her, reports the Indian Express.

Women have played a significant role in the demonstration in Sudan in recent months, with men often in a minority among the crowds calling for president Omar al-Bashir to step down. Many well-known women activists have been detained since the first wave of protests at the end of last year. “This regime could not crush down women and women’s ability to fight for change and freedom… Sudanese women’s resistance and resilience overcome this suppression,” said Dr Sara Abdelgalil, head of the UK branch of the Sudan Doctors’ Union, who moved to Britain in 2001 but is in contact with protest leaders.

A Human Rights Watch report described how national security services targeted women activists during crackdowns. The “public order police” arrest women and girls for their choice of dress, such as wearing trousers or exposing their hair or for merely riding in a car with members of the opposite sex. Corporal punishments for adultery have been used disproportionately on women and girls, the group said. One observer in Sudan said the unidentified young woman was wearing “the clothing worn by our mothers and grandmothers in the 60s, 70s, and 80s … while they marched the streets demonstrating against previous military dictatorships”.

The protests began in December last year when the government tripled the price of bread and quickly spread, says The Guardian. According to Sudanese non-governmental groups, some 15,000 women were sentenced to flogging in 2016. Jehanne Henry, who works on Sudan for the international NGO Human Rights Watch, said women had played a significant role historically in political activism in the country, adding that it was difficult to tell if they were more prominent in the current protests than in previous unrest. “For many women this regime is synonymous with all types of repression ... It is not surprising that they are seeing this as an opportunity to change things that matters to them,” she said.

The woman was later identified as Alaa Salah, a 22-year-old architecture student. Talking to The Guardian, the young woman said she was happy with the outpouring of love and support from across the globe. “I’m very glad that my photo let people around the world know about the revolution in Sudan … Since the beginning of the uprising I have been going out every day and participating in the demonstrations because my parents raised me to love our home,” Salah said.

Now protesters have demanded that President Omar al-Bashir, who has been in charge for nearly 30 years, should step down. Poor governance along with cuts in bread and fuel subsidies has resulted in such serious protests in the country that has left many dead.