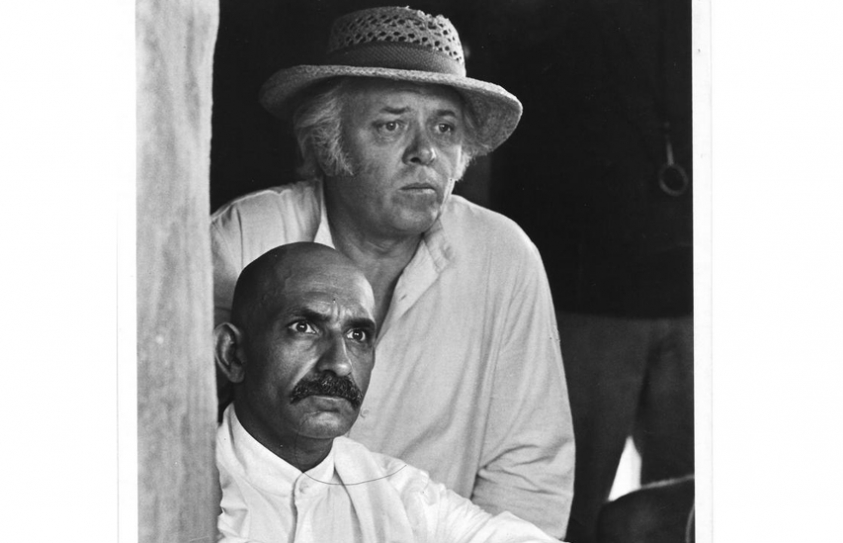 An Encounter With Sir Richard

When I met Richard Attenborough after a press conference on a Sunday morning at Bandra’s Sea rock Hotel, he was wearing a turquoise blue kurta and fawn trousers, a wide hat was at hand, I soon discovered, that was his dress code during the making of Gandhi. I was briefed by the PR ladies that I had just 10 minutes with the newly knighted filmmaker. Wary about the British protocol, I asked how I should address him. The local lady suggested: Sir Richard, but the Brit head of publicity said: ‘Call him Richard or Dickie.’

Attenborough and his unit had received a drubbing by the media in Delhi, so requests for interviews and visiting the sets were met with much trepidation. A brief fax on the context of my article allayed their fears, and I went the whole hog, but not without their supervision.

He kept calling me ‘Darling Girl’ and made sure I was comfortable. The first question was the obvious: Why Gandhi? “I knew next to nothing about Bapu till someone gave me his biography by Louis Fischer,” the director replied. Coincidentally, I was reading the same book; but I daren’t start a book discussion as the hawk-eyed PR team was hovering around to make sure I didn’t trespass beyond the allotted time.

Attenborough continued that, “I was struck by this incident in South Africa, where Gandhiji is walking with another Indian and two South African whites come towards them. As is expected the two Indians step aside into the gutter. Later, Gandhiji tells his friend ‘I am amazed that men feel honoured by humiliating their fellow human beings.’ A staggering statement from a 20-year-old!” Soon Attenborough found himself overwhelmed with what   he read. That when man slaughtered man in the name of God, “this little brown man from Gujarat should show them the way passively.”

Attenborough reminisced about a meeting he had with Nehru 20 years before a single shot was canned. “It is ironical, that when I met Pandit Nehru in 1962 to show him my script, as I was leaving, he said, ‘Richard whatever you do make sure you cast an English actor to play Bapu. No Indian actor will be able to play Bapu over such a span. Besides it will make Bapu laugh.’ ”

Ben Kingsley’s uncanny resemblance to Mahatma Gandhi, led many locals, who milled around the shooting in various parts of India, think him to be Gandhi’s ghost. “Physical resemblance was a prerequisite,” said Attenborough, when asked about the casting. “I had photographs of various actors under consideration for various roles, stuck up on the wall, which had sketches of characters drawn on,” the director shared. “I had Ben (Kingsley) in mind for five years, from the first time I saw him. Nobody struck me as Ben did.” Born Krishna Pandit Bhanji, the English actor changed his name to Ben Kingsley.

Ben Kingsley and Rohini Hattangadi made the final cut as Ba and Bapu, after Richard Attenborough had screened several actor pairs. Though both actors were taller than Ba and Bapu, the height difference between them made them suitable. Actors originally considered playing Mohandas Karamchand Gandhi were marquee names like Alec Guinness, Albert Finney, Peter Finch, Tom Courtney, Dirk Borgarde, Anthony Hopkins and John Hurt. The latter, in fact, was screen tested with Bhakti Barve. The other contenders were Naseeruddin Shah and Smita Patil, the latter was greatly admired by Attenborough who   called her ‘a ravishing beauty’. It was the same beauty that lost Smita the role of Ba. “I still hadn’t cast my Ba, when I saw Rohini walking into my room at the Centaur Hotel, then I said to myself: This is it. This is my Kasturba.” Then he saw her on stage in a role which spanned ages from 20 years to 80 years.

The sleepy hamlet of Panvel on the Bombay-Pune Road suddenly woke up to the presence of hoardes of firangis, cameras, lights, recorders, etc. Tents were pitched, houses constructed. Bare-chested or vested men in Bermudas and sneakers and hats, bandanas, caps and sunglasses would be perched on cranes and aluminum scaffolds adjusting reflectors, lights and   cranes with   cameras and operators dotted the landscape that February late morning.

Bermudas, cottons, headgear and sunglasses were the dress code, strictly behind the camera, on camera it was dress for the scene. That warm day in Panvel, Rohini Hattangadi was dressed up in a light beige sari with a full sleeved lace and ruffles blouse. While, Ben Kingsley was in a white shirt and beige trousers. Post-lunch I was driven past the temple by the pond where   Ba and Bapu re-enact their wedding vows, as they were mere children when they first walked the saat pheras and hadn’t understood the importance of their vows.

In the late 1980s, I visited a village near Panvel for a medical camp sponsored by an NGO that I was then working with. One of the volunteers insisted that before we return to the city, we do some ‘sightseeing’. He took us to a small temple on the edge of a water body with steps. “This is where Bapu got married to Ba!” He exclaimed. Noticing the puzzled faces and before anyone could jump at this distortion of history, he continued, “I mean, in Richard Attenborough’s film Gandhi.” My colleagues and I were then shown around more spots – like the area where the Phoenix Ashram from the South Africa days of Mohandas Karamchand Gandhi was replicated. That day, I returned home and delved into my clippings’ file to read an article: Gandhi Comes to Bombay which I had written for a fan magazine in 1981.

Life couldn’t have been the same even for Richard Attenborough. The film he had waited to make for 20 years, earned him a rich haul of awards and box office collections. Gandhi is the first feature film which authentically depicts India’s fight for freedom and succeeded in taking history out of classrooms and books. We have to thank Richard Attenborough for that.