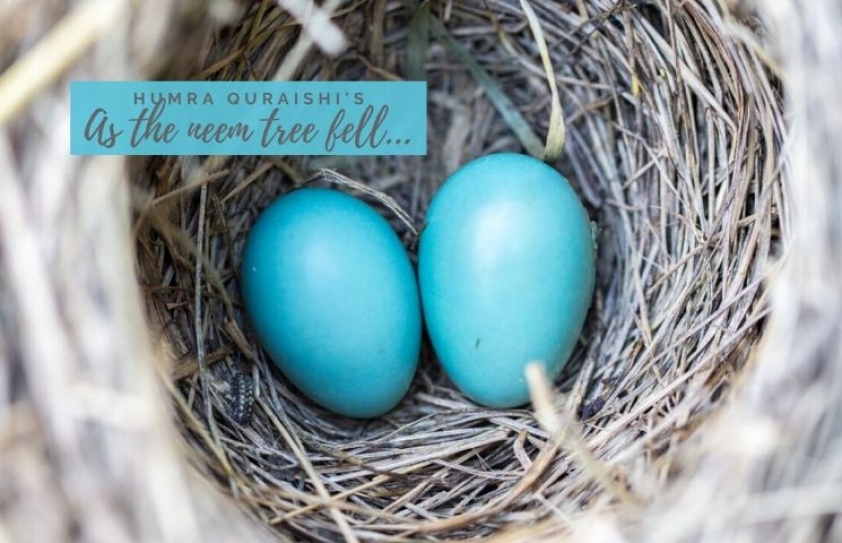 As the neem tree fell… The delivery boy came up!

Humra Quraishi  tells the story of Zeb... a young unemployed boy, who gave birth to his new job…

It was a stormy and turbulent night but we had continued to sit; we remained unmoved from the verandah of the ancestral kothi. We sat staring at the tall Neem trees, at those branches swaying wildly amidst the unabated fury of the strong winds and discussing the clan’s obsession with the healing powers of Neem.

What, with several of my cousins prefixing ‘Hakeem’ to their names, along with delving deep into the study of medical properties of the Neem bark, fruit, leaves and flowers… Even that night, my cousins kept talking non- stop of the long list of virtues of Neem, which keeps at bay - termites, diabetes, tooth decay and various types of infections.

A sudden commotion. One of the Neem trees fell. Perhaps, the thud wasn’t particularly harsh as the tree fell on adjoining shrubs. More than the noise what stunned us was my maternal grandmother, Amna Hussain sahiba’s, shriek. Before she could scream any further, another Neem tree fell. Surveying the fallen trees, along with that consoling herself and the rest of us she said, ‘They’re falling on their own! Not that we cut and chopped them… never cut a tree! Shahrukh had once done that… hell it was!’

Detailing those times when her younger brother had chopped off a Neem tree, which was growing in the courtyard she continued, ‘Shahrukh had gone on and on that the tree was blocking our sunlight. Angrily he took to  cutting  its lofty branches and  by  the  time the  axe had  hit the  trunk, there was blood  on that axe… yes, blood  trickling down, with those maalis and  chowkidars shrieking that Jinns lived on this tree!’

‘Did Jinns live on that Neem tree?’

‘Jinns did live on those branches but they didn’t take revenge. After all, Jinns not jallads! They understood my brother’s recklessness… but then to make up for that, we took to planting as many Neem trees as possible!’ She’d looked about at those fallen trees with an array of emotions. ‘Never ever trouble a Neem, its loaded!’

That night when another Neem tree fell, efforts were made to fetch the ageing Hakeem, Haider Hussain sahib, from his haveli. Perhaps, to mourn the loss of the freshly fallen trees? A collective mourning!

A rickshaw was arranged to fetch him. After all, he was the oldest surviving member of the clan. He arrived armed with a small torch and a big lantern. Looking somewhat flustered, the first thing he did was to walk towards the three fallen trees. Not too sure whether he was muttering Fatiha prayers or condolences or both. And as that night progressed, we’d heard a whole lot of Jinn stories from him till about noon the next day.

He had come to spend only few hours at our ancestral kothi but nobody would let him go. And come afternoon, he looked impatient and tense as his wife had sent a neatly folded one-page letter through an unemployed young man, Zeb, who lived in one of the outer rooms of their haveli.

The couple possessed no car, no telephone and none of the other gadgets needed to connect and communicate. So this note was sent to him, before she herself arrived in another one of those rickshaws!  She flung around some angry looks at him before bursting out, ‘You left me behind. I’ve been waiting for you! Enough! All our plants and trees and creepers are waiting for you!’

Whilst we smirked, he didn’t look amused and decided to go back with her, almost immediately and even after my grandmother insisted that he and his wife should stay back until the evening, they spoke of ‘their’ plants as though they were their offsprings.

But, before stepping out, they asked us, if my sisters and I wanted to spend a couple of days at their haveli, ‘Come along… will cook lots of tarkaris growing in the backyard. There’ll be raunaq in our haveli… childless we are, but that doesn’t mean we dislike laughter!’

A sigh of relief as the rickshaw turned towards their haveli… well inside the  gates. The greens stood out. The couple walked around ‘their’ plants, shrubs, trees, saplings and creepers… watering them with a rubbery crumbling pipe, before announcing it was time for  their  much-needed  tea  break.

Pulling out a rickety table, rushing in and out of the kitchen, with cups brimming with chai and a wooden tray over-laden with home-made atta cookies… dipping the cookies in the chai, we sat rather attentive, hearing them detail the significance of leaves, ‘These Jamun leaves control blood sugar levels, paan-pattas for digestion and diabetes, bel-pathars heal intestines, guava leaves - the best possible remedy for throat problems!’

Before we could digest the long list of benefits of those leaves, a small assembly gathered around us. Withered looking mohalla-wallahs desperately in need of relief from pains, coughs and cold, skin eruptions and boils… and as she and he began handing them leaves and  flowers  from  their varied plant, for their varied ailment, their commentary continued, ‘Nature’s bounty to settle everyday disorders in this disorderly system!’ still looking at their patients in that earnestly connected way they said to us, ‘These people were once thriving but now only poverty thrives here… so much poverty! Anyway, doing all that we can do for them.’

That night as we slept on cots in their courtyard, the quiet lay ruptured by the sound of screaming coming from not too far. Much too bewildered we sat up, even as this couple went assuring and reassuring us, ‘Nothing to worry… nothing dangerous is happening here! It’s Zeb’s begum’s delivery time… arrival of a new life comes with much effort’, before walking towards the outer rooms to their haveli, where Zeb lived with his wife. 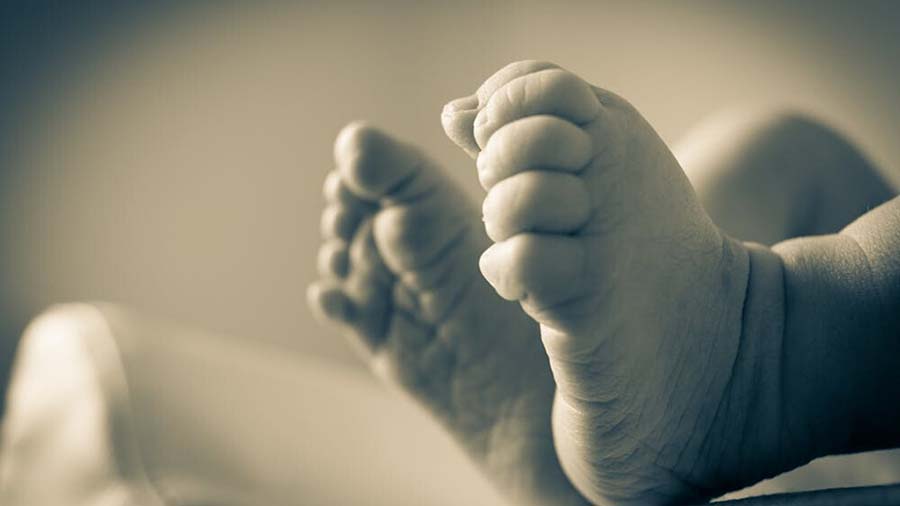 In the next minute or so, this couple was carrying a young woman with a hugely protruding stomach. Making her lie on a cot, they kept rubbing her hands and feet and also settling, rather re-settling the shalwar- kameez on her.

Seeing our curiosity, we were told repeatedly to move inwards, into the living room.

‘Why should we sleep inside?’

‘Because a baby arriving… you’ll see the baby only in the morning… now we are getting busy taking out the baby.’

Before they could react to our ongoing queries, that pregnant woman’s shrieks getting shriller and louder. With that, this couple kept instructing Zeb to rush here and there in that garden stretch, collecting Neem and clove leaves before setting them to boil.

In between that bandobast, ample warnings were getting thrown at us to move inside. And we moved inwards, but not really. From the open bay window we continued watching the woman writhing in pain, even as Zeb tried rubbing various leafy concoctions on her bloated stomach, together with rubbing her  feet and legs with what  looked like another of those leafy-flowery pastes. And as her shrieks intensified so did his massaging tactics. And in between it all, the couple sat looking much too exhausted, instructing him all along… helping him deliver the baby.

Suddenly a huge gigantic shriek before a lull of sorts. Overtaken by a new-born’s wail!

With that, we came rushing out, towards the cot, where the couple were holding the new born, whilst Zeb was patting and rubbing turmeric-garlic-clove paste all over his wife’s abdomen and inner thighs. Yes, there were bloody stains spreading themselves out but this young man was taking care of not just the mess but also of his wife’s subdued cries.

Don’t know whether they were cries of relief from the exhausting labour pains or else cries erupting out of sheer joy seeing her new born. Whatever be the case he was managing her quite well, gently patting her back, her hair, her limbs… And as he was trying to put up a maachar-daani on her cot so that mosquitoes don’t invade, some sort of movement around the courtyard’s outer gate took place.

Before not too much longer, there stood an ageing bent woman. She had walked from the adjoining mohalla, with requests not just for Neem leaves and turmeric roots but also assistance in the delivery of her daughter, as the midwife couldn’t be fetched at that hour. It was the middle of the night.

Hakeem sahib and his wife not just explained their ‘complete exhaustion, but much to the ageing and bent woman’s bewilderment, they suggested Zeb’s name.

‘But he a man…how can he see my daughter in that state of utter nakedness… No, no… impossible! How can you even suggest this!’

‘He’ll cover his face… will be helping you bring into this world a new life!’

‘But how can he help deliver… He a man!’

‘See… he just helped his wife deliver… see, for yourself. We were only instructing him but he took care of the actual delivery… taking care of his wife all through.’

‘Never heard of a man doing all this! Taubah…Taubah!’

‘Look this side, his wife and baby look fine because of him… he followed all our instructions.’

‘But …what will the mohalla- wallahs say!’

‘Don’t you want your daughter to deliver soon and safely? Don’t waste time… we all are too exhausted. Decide or leave.’

‘Theek hai… let him help with the delivery but you both have to come along with him.’

‘Okay we will come along but will only sit there… and instruct. Zeb will be the delivery boy!’

That seemed to work.

From that day onwards, unemployed Zeb was more than employed!

He became the much sought after delivery boy!