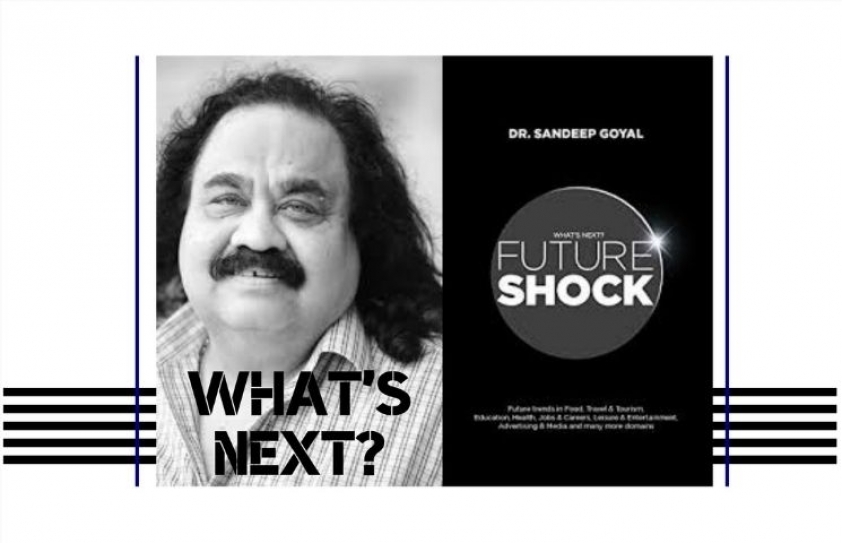 The prologue by Sanjay Gupta, Country Manager Google India and introduction by Prasad Sangameshwara, Editor ETBrandEquity.com along with a part from the chapter titled Advertising, Media; Digital and Content - Excerpted from the book Future Shock by Dr Sandeep Goyal 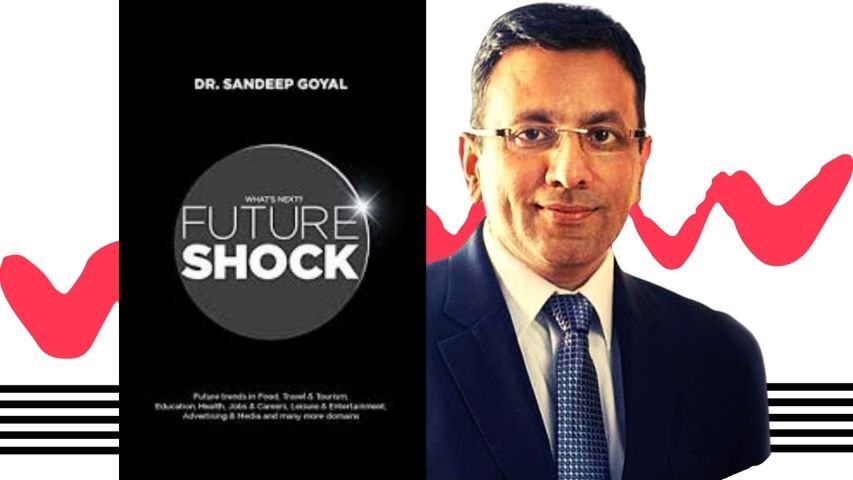 We are living in a time of over-information. Each one of us is being bombarded with news, comments, likes, forwards, you name it; each intended to ratchet up emotion, hyper accelerate change and a frenzy of opinions and jargon. This has all contributed to an endless overwhelm.

How does one make sense out of this? How do you synthesise all this and explain today and possibly predict tomorrow? How do you move from ‘Information Overload’ to ‘Identifying Trends’?

To arrive at that, it’s useful to rst identify a fundamental question – What exactly is a trend? To my understanding, a trend is a new manifestation – in behaviour, attitude or expectation – of a fundamental human need, want or desire. A trend is about now. And about tomorrow.

Traditional market research most often falls short of predicting the future, simply because it is largely based on data about what people were doing, or saying, yesterday.

At the same time, predicting the future is not a guessing game. It is actually a strenuous and painstaking effort to collate, sieve through, examine, analyse and assess a large amount of information from varying sources to track key indicators, which provide clues that a particular trend is evolving, and whether it merits further exploration. Predicting the future, therefore, is not easy. Writing a book about it is even more difficult.

Another barometer for nascent trends is search queries people make on the Internet. Search data provides a unique view of what people are currently interested in, curious about, or concerned with.

In these trying times, many new anxieties and questions have surfaced, resulting in exponentially higher search queries ... on the virus, on cures; on filling time, killing time; on working from home, enabling technologies; on e-learning; on food safety, cooking and eating-in; on apprehensions around job losses, newer opportunities; on up-skilling; on future travel and much more.

Most of the trends covered in Dr. Sandeep Goyal’s book Future Shock are ones that the world has been searching for over the past few months – seeking reliable information from researchers and experts; allaying fears and anxieties; obtaining reassurance and solace.

In my personal experience, trends, and trend extrapolation, are powerful tools for storytelling because they help map people’s reactions over different moments in time.

The past few months have had the greatest impact on the world. These seismic changes, the trends emerging from them and consequent impact on human behaviour, are undoubtedly a subject that would make for a great book, or several.

I have known Dr. Goyal for more than a decade. He has been an advertising and media veteran, having worked across many domains for more than thirty- five years. He, therefore, possesses the experience, the erudition and the exposure that writing about the future, especially Future Shock, needs.

It has been famously said that the quality of your life is in direct proportion to the amount of uncertainty you can comfortably deal with. The future is what we wish to make of it. Future Shock is an attempt to collate and map change as it impacts the future of the world we live in today.

Dr. Goyal’s book is neither prescriptive, nor does he pontificate. He just points the reader in the direction of the change. And let’s you decipher for yourself what the future may, therefore, potentially hold.

Predicting the future, as I said before, is notoriously di cult. But systematic analysis can lead to clearer understanding and wiser decisions. Future Shock is really a guide to thinking intelligently about the future – a little peep into tomorrow, by looking at a whole lot of today, and a bit of yesterday. 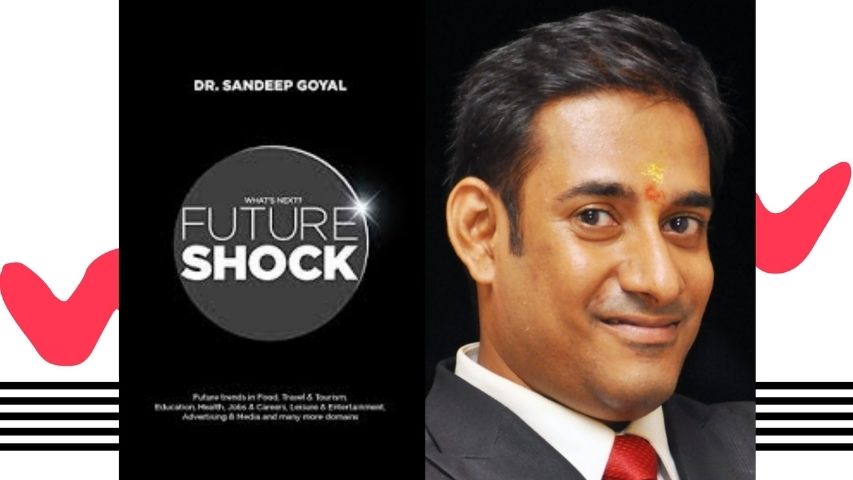 For a large part of 2019, the cloud of an economic slowdown was looming large over the corporate sector. In March 2020, when large parts of the world, including India, announced a complete lockdown in the battle against the Coronavirus, the world of business received a 440-voltage electric shock. The shock was more than just a hair-raising experience, as is famously illustrated by the toons, or that famous ad for a chewing gum brand.

In reality, there was bound to be more pain than gain for business in the short-term to mid-term. There was “too much change in too short a period of time”, and no one had articulated this better than futurist Alvin Toffler, in his bestseller Future Shock, that was published nearly ve decades ago.

The rapid changes in the Covid-era prompted Dr. Sandeep Goyal, who’s been tracking the media and advertising landscape for more than three decades to propose a series on the impact of Covid-19 on key sectors like food, health, education, jobs, entertainment and others for the marketing news vortal, ETBrandEquity.com.

A month into the lockdown, when this series was being written, most of the advertising and marketing world was still grappling with the pace of change and uncertainty that was glaring at them. As the fear of disease escalated, as job insecurity and pay cuts became a part of the new normal, as there were severe restrictions on people movement and socialising, it was a no-brainer to suggest that human behaviour had been altered. Dr. Goyal went beyond the over-the-top glazing commentary and instead adorned the role of a journalist. For one of his chapters on ‘Twenty-Five Trends on the Future of Food and Hospitality’, he interviewed master-chef Sanjeev Kapoor and the conversation brings out fascinating insights like the purchase of high-intensity cooking gas stoves by households. This observation is based on the fact that as eating-out at restaurants comes down drastically, ‘momade’ food will be much in demand. Compared to the home kitchen ames, restaurant cooking is essentially done at a much higher temperature – that is what releases food enzymes and makes restaurant food tastier – it will perk up demand for the gas stoves that aid higher temperature cooking. To win consumer confidence on aspects like food safety, health of employees working in restaurant kitchens and hygiene, the chapter also forecasts the emergence of naked kitchens (visible to all clients inside restaurants).

Goyal also ponders over the possibility of a disproportionately larger decline in animal protein consumption (as a result of unscientific consumer fears that animals might be hosts of the virus). Also, food demand in poorer countries is more linked to income, and here, loss of income-earning opportunities could impact consumption.

In another discussion about the future of jobs, he paints a future scenario of robots serving food and medicines to patients in isolation wards as the health of frontline health workers comes under a threat, making such jobs unattractive for humans. He predicts that robots will start to come into active use for many ‘contact less’ functions, including retail deliveries, and this could negatively impact jobs.

The Coronavirus crisis has also removed the stigma attached to areas as diverse as distance learning, or carrying meat home in a black bag. Brands like Licious are now delivering meat home in attractive packaging and home-schooling can become a distinct possibility, especially with middle and upper middle families as schools in some parts of the country will be shut till December 2020.

The business may take anything between nine to twenty-four months to start climbing back to previous peaks, says Goyal. Others predict that the path to recovery will be in the shape of a reverse square root and it will not be able to climb to previous levels anytime soon. Till then the headwinds will be strong and severe. As Goyal says it like it is, “some will succeed, some will struggle, some will perish”. 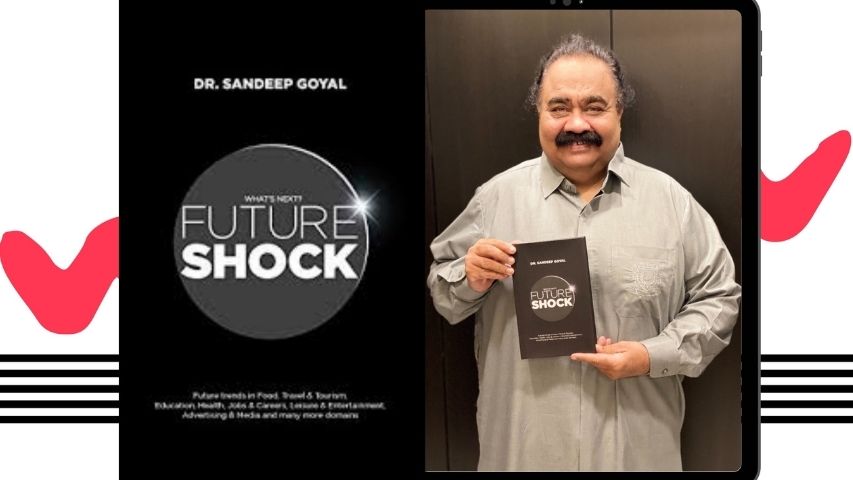 The pandemic really has dealt a body blow to the advertising business, as it has existed for over a century now. The break- down of supply chains, the shuttering of factories, the closure of retail, and the general hiatus in the buying of goods and services by consumers, has fundamentally re-contoured the marketing domain and all the thinking surrounding it. The crisis has already altered consumer behaviour significantly. There has been a visible shift in how people have started to use technology, e-commerce, live streaming, e learning, gaming and even online grocery shopping. At the same time heightened hygiene and safety concerns, work from home (WFH), social distancing, travel-if-you-must, no vacations, food take-away and home deliveries have changed established patterns of purchase, mobility, consumption and payment. All of this has impacted businesses; in turn it has forced companies to revisit their approach to marketing and that has obviously impacted the way brands will henceforth reach out to consumers and influence them to buy. But, before we go any further, let us acknowledge two very important trends that define the rest of my narrative on the subject:

At an industry level, the media world got shaken up in a different kind of way by the forced hiatus; especially the ‘Work from Home’ in a business that requires much teamwork and coordination. Most very quickly figured out that if there’s one thing that can help keep a company moving when employees are unable to be physically present in the office, it’s RPA (Robotic Process Automation) and it’s smarter and better version IPA (Intelligent Process Automation).

Media companies, especially those in broadcasting and digital, having been severely impacted by the pandemic, have figured that they need to offload as many tasks as they can to technology to ensure that business runs smoothly once the next global disruption occurs. This is not going to be as much about displacement of work as it is about up leveling and automating the mundane – a lot of investment will be directed towards seeing software driven automation meet the cloud and accelerate with the help of AI.

Despite some of the optimism starting to shine through after a prolonged period of doom and gloom with the ‘unlocks’, the long-term picture for marketers could be less than sunny. The times ahead are going to be difficult for the advertising and media domain. Much change, much rethinking, much reorientation is on the cards. Let us look at major trends that are likely to take shape in the near future, medium by medium.