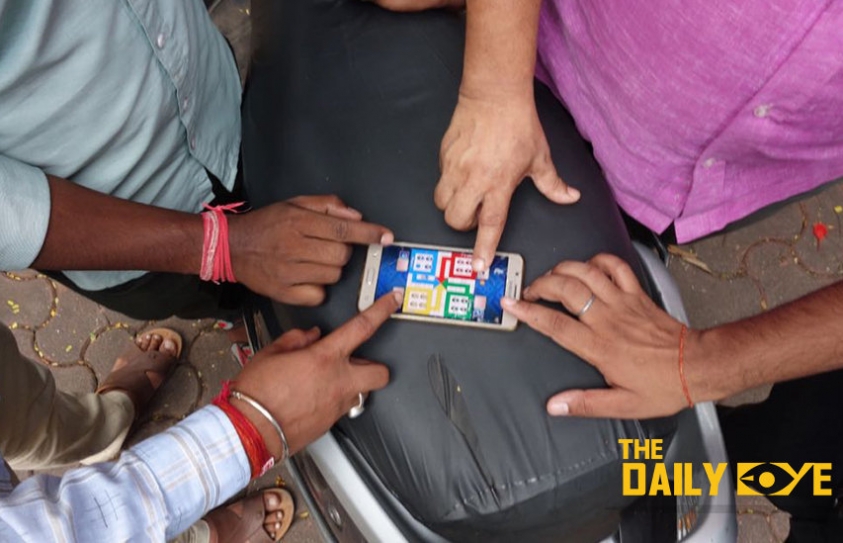 Ludo Mania On Cell Phones For The Common Man

Ludo mania has swept Mumbai and is spreading to the small towns of northern India, mainly Bihar, U.P. and Jharkhand.

The unusual aspect of the mania is that the centuries-old boardgame is now being played on cellphones. Downloads of  apps have spiralled sky-high in the last three months.

And it’s largely, blue collar workers, domestic helps at the swishy home of the metropolis, kaali peeli cabbies waiting for fares, and commuters on over hour-long rides on local trains from south Mumbai to the suburbs, who are into Ludo.

There are at least ten easy-to-go-to apps for virtually free downloads on the Internet currently. Ludo King, the most prominent one in the clutter, has recorded upbeat reviews from over four lakh khilaris.

I say ‘khilaris’ because the boardgame, associated with the pre-teenage years of growing up, now entices bets – the wagers ranging from Rs 10 and Rs 100 a game to figures in thousands.

Vishnu Rawat, an electrician at a central Mumbai housing society, stated with some flourish, “There can be no Shakuni mamas any more. Since Ludo is played with a click rather than a throw of dice, there’s no cheating.” The allusion, of course, is to the Mahabharata epic: Duryodhana’s wily uncle Shakuni owned a set of dice which obeyed his orders.

Of the scores of cellphone Ludo addicts I talked to, most of them pointed out that assembled-in-India smartphones are no longer beyond their budget. Arjun Jadhav, a domestic aid in the western suburbs, conceded, “Bets are on at times but not at high stakes. At the end of the month, when we are all quite broke, the loser just has to buy us a round of chai and vada-paus.”

Is the Ludo habit placed on hold, when the domestic aides head towards their villages for their annual chhuti? “Absolutely not,” Jadhav laughed. “Now even in my hometown, Madhubani, you will see our fathers and grandfathers playing the game for time-pass. Some of them do lay small bets. Our wives, sisters and mothers keep away from Ludo though because they see it as a form of gambling.”

According to Kalpesh Patel, an online sales entrepreneur, the mania has been evidenced in the cities of Gujarat of late. “Groups of businessmen have discovered an alternate option to card games.” To that he added cautiously, “But I am clueless if the stakes are high or low. It’s just that when I had visited Surat a month ago, I was quite surprised to see many of my friends, clicking away at the boardgame on their cells in twos and fours. They aren’t so much into impromptu card parties anymore.”

The online games Candy Crush and Angry Birds aren’t an option for the blue collar workers. “Ludo is child’s play and that’s the way we like it,” remarked Ahmed Syed, who works as a chauffeur to a south Bombay family during day and drives a taxi  by night to augment his income. “Iss mein harz kya hai? (What’s the problem with this?)” Syed countered. “Are you insinuating that we are doing something illegal?”

To crosscheck whether Ludo bets – for major or minor sums of money--  can be construed as illegal gambling, I asked police officer H. Goswami for his take.

“The craze is there,” he acknowledged right off. “But there have been no untoward incidents or street brawls, the sort which are caused by card and carrom board game in the backalleyes of Mumbai. Till an FIR report is registered or any form of aggravation is noticed in a public place by constables on street patrolling duty, no objections can be taken.”

So, there you are, the boardgame called Pachisi which originated in India back in the sixth century – and was then modified and patented as Ludo towards the closing years of 19th century in England -- has become the poor man’s game in Mumbai right now.

And to think it was once played exclusively by the emperors and the aristocracy. Today, no tumbling dice is required.