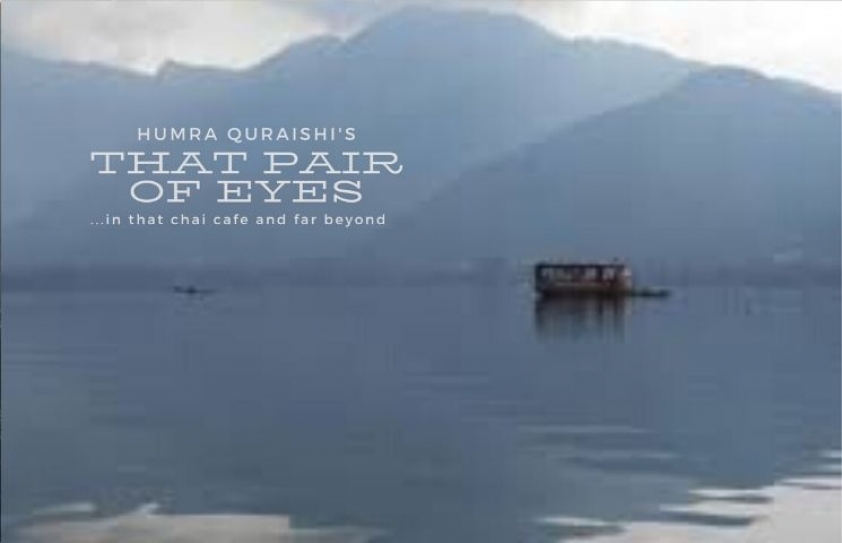 That pair of eyes…

His words changed my perception to life and living… nudging me to accept whatever comes along in life, writes Humra Quraishi

Over two summers back, during  one of  my  travels to the Kashmir Valley,  as  I’d  entered  a  chai  cafe,  what  hit me was this pair of eyes. An ageing man  sat at one end of the café; and  his  eyes  stood  out from the ruins of what must have been a very  handsome face.

For years I’d been looking for that pair of eyes carrying fierce intensity together with gentle want. But  in this metropolitan intense individuals a rarity of sorts, to find intensity dripping eyes was an impossibility ...

I’d stared at him. To be precise at his eyes.

He stared back. Continued doing so as the manager manning that small café asked him if I could share his table with him because the other five tables were reserved and the guests could be coming in anytime soon. And as I walked  towards his  table, he seemed quite okay for me to sit across him.

We ordered tea and then more tea. Sipping chai we chatted for what seemed like hours. I was getting drawn to him… to the way he spoke out in that blatantly forthright way. His deep voice impregnated with emotions, added to the very flow; of words that is.

Our talks started with the mundane but went beyond, stretching ahead, centering around his interests, this place and those offshoots. After years I felt comfortable talking in that carefree way to a  stranger… I sat there talking to him as though in some sort of a trance. No, I did not bother to look at the watch on my wrist, nor towards the setting sun. 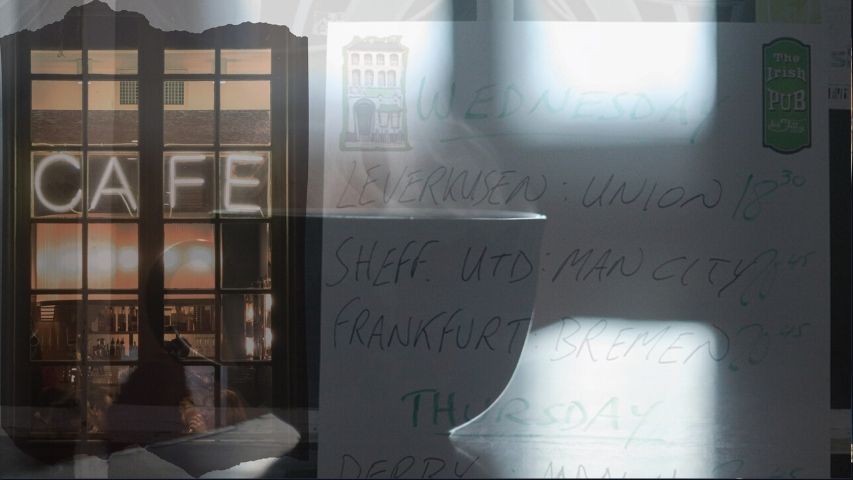 There was an interruption as the manager neared our table to tell us that it was time for closure. Of this café, not of anything else.

I didn’t want to move from that table, from that cafe, from that person. I didn’t want this premature parting to take place. Putting his hands on the knees, stretching his legs, this man tried getting up, mumbling, “Arthritis at work... playing havoc with my legs!”

I tried asking him if we could meet again or at least talk. He looked somewhat tense, ‘No, no… talk how! I told you I haven’t bought a mobile… hate that crazy intrusive thing… I’m the only person around who doesn’t possess a mobile here!’

‘We could meet at this café. If it’s difficult for you to reach this café, I’ll come to your place. Maybe tomorrow or... ’

Looking more than tense, turning his back, he was walking away. No, not pausing or looking back. Not even bothering to utter a word.

For a couple of minutes I stood there, rather still. Upset and hurt. Then I started walking towards him. Till a very short distance away,  I saw him turn towards an inner road, into a home compound. From the gate where I stood, I could see him walk somewhat further, before entering the semi-covered outer verandah. And the next second he was trying to hold a human form. Perhaps, he was hugging his wife or whoever was said to be waiting for him.

All of it was too strange!

Conflicting thoughts pierced into me to such an extent that bypassing protocols, pressing the door-bell and even knocking, I walked inwards, into the semi- covered verandah. Seeing me standing right there, he looked all too startled and more than upset. The ageing woman he was trying to hold or hug, sounded angry and aggressive, ‘Someone around here? Anyone here! You got along someone? Who’s walked in with you?  Right here!’ Together, with settling the dupatta on her, he tried mumbling, ‘No, no one’s here. Just this breeze… this breeze.’

‘No breeze! Someone’s around here, not too far.’

‘No one’s here, you’re imagining… as always your silly allegations and …’

‘Just because I can’t see and you can!’

‘You got along a woman! A woman here! Just because I  can’t see and… ’

‘No woman here! It’s this breeze!’

‘What breeze… it’s so warm! I can sense what’s going on even if I can’t see.’

‘You can’t sense… nobody dare come in between you and I!’

‘You and your dialogues!’

‘You’re always suspecting… all these years of our marriage! Telling you no one’s around. Only me… I’m there for you.’

His eyes looked angrily towards me. More than saying I should get out.

Far away from him, from his place, from his woman.

I rushed out. Tried walking as fast as I possibly could. But I couldn’t walk beyond the narrow road… Hurt and exhausted, I sat back on a boulder at the roadside. Angry and upset with myself, cursing myself for having been very naïve… as always! Quite obviously, he was out for a mere breather. That’s about it. Nothing less or more to it. Silly and stupid of me to have thought he was going to breath life into my mundane existence!

Don’t know for how long I must have sat there, on that boulder.

Till I’d counseled and settled my bruised self to such an extent that I could at least walk on… Desperate to drown my sorrow in chai, I tried taking the short cut to the main road, looking for a café or an eatery but shutters were down all along the way. I was walking still ahead, towards the Dal Lake… all too hurriedly hiring a shikara, hopping into it, sitting back and closing my eyes, allowing my two eyes to take out all possible tears by way of mourning or moaning or both. In between it all, rebuking myself!

As the  shikara  gently moved on those waters, I started  feeling somewhat relaxed. The gentle breeze and those slow flowing waters calmed me to a certain extent and as the shikara-wallah rowed along in that ongoing way, I put my hands in those waters, playing with those ripples, pulling out strange looking weeds, catching hold of crestfallen flowers that were floating along…

I had hired  the shikara only till the Char Chinar little island set in the middle of this lake and then back to the Dal Gate side but just as the  shikara was reaching the Char Chinar island, I told the shikara-wallah to  take it further and further ahead…

Beyond the Char Chinar, towards Naseem Bagh and the  Hazrat Bal Shrine, and still further towards the  end of the lake, right  up to  that  fishermen’s  village.

Hearing me continuing to give ongoing directions, he said that it wouldn’t be possible as it was getting dark.

‘But I’ll pay you… will be paying you extra. Whatever the rate and… ’

‘Nothing to do with payment. It wouldn’t be possible for me to keep on rowing with this darkness spreading…. I’m going to turn the shikara from here and leave  you at the Dal Gate side.’’

‘No, no… I don’t want to stuff myself back in that dingy hotel room… its not very dark… Will pay for another two hours of this shikara ride.’

‘What… why are you going on and on saying its night time!’

‘Its getting so dark and… ’

‘You have put on these dark glasses and that’s why you saying its getting dark… just remove these shades and see its not that dark!’

He didn’t say a word. Nor did he remove the sun- glasses.

Until I once again told him to do so. This time he removed them. There was absolute silence for seconds or minutes!

All too shocked and rattled, I still couldn’t utter a word… just  kept on listening to him, ‘First I couldn’t see a  thing then one very good eye doctor janaab Dr Natarajan, was brought here to Srinagar from Bombay’s Aditya  Jyot hospital… and his team and our doctor janaabs tried their best…. I can see from one eye but my studies gone! I was trying to get admission in college but now my studies are all ruined.’

All that I could barely mumble, ‘But… then… now what!’

‘Nothing! At least there’s roshni in one eye… Shukar!

‘But it must be very difficult?’

“For days I sat very sad and angry and so upset… I couldn’t even cry out  because of the injuries and bandages… then I sat back with sabr, accepting this change. You know my one old teacher who’d taught me in school, her both eyes gone… hit in pellet gun firing!’

‘Your teacher staying with you all… near your home?’

‘No, no… she’s not like us… she’s rich.  Her house near that main big bazaar, where there are lots of places to eat and all those restaurants and cafes… she got injured in firing near her market. Now she can’t see at all! No children she has but her husband takes care of her… very good care.’

‘And who takes care of you?’

‘I live with my parents but they getting old… This is my father’s shikara. Earlier I was hardly here on the lake, too busy studying but now all’s changed. At least my one eye is still okay! What if both eyes had been destroyed by those pellet guns!  Sabr… life is nothing but accepting all that comes along!’

His words changed my perception to life and living… nudging me to accept whatever comes along in life.