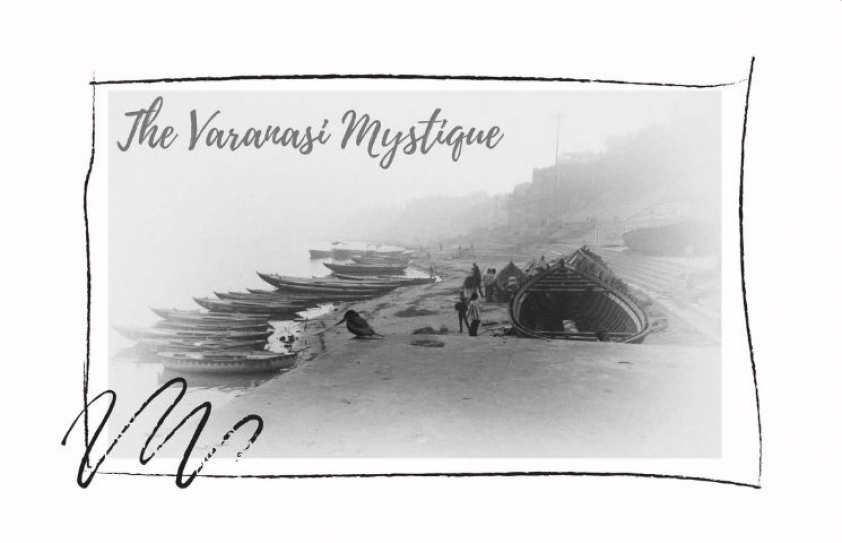 A photo-essay by Ashis Ghatak, vivifying how the winter sets in on the holy city of Varanasi, on the banks of the River Ganges.

Varanasi earns an added robe of mysticism when winter sets in. The city opens up new vistas of meaning every time I come in.

Every visit ends up with a sense of longing for more because there is always a sense of unexplored mystery. The kaleidoscopic events and the endless string of activities in such a vast backdrop of history, religion and a deep rooted Indianness of the city invariably boggles my mind.

Despite the lack of any so-called sightseeing places that a normal touristy place demands, Varanasi offers something, which any other Indian city gives. And that 'something' is beyond my perceptual experience. This is the mysticism that binds me in a strange hypnosis. Winter adds to this a mystic strangeness. 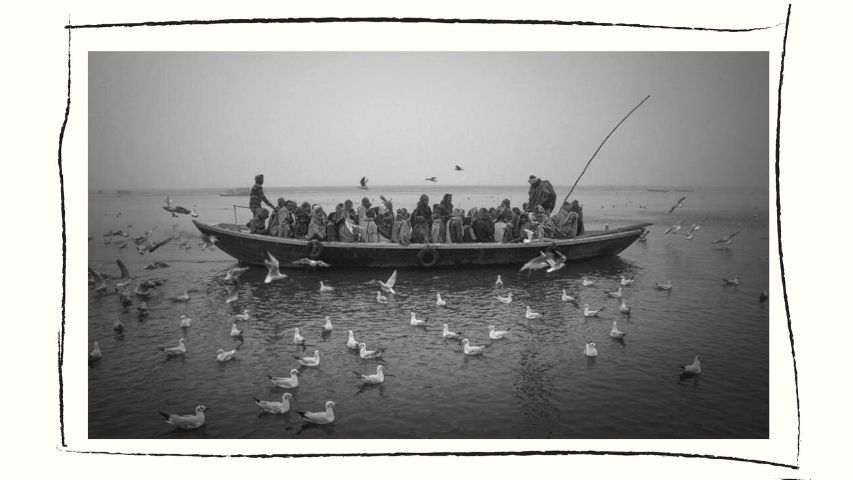 When I stepped out of the train in the early morning at Mughalsarai, a thump of cold breeze struck me instantly. The platform was nearly empty. The coolies and auto drivers came through the fog covering all over with a red blanket. Dawn has just broken out.

No matter what the season is, the saffron-robed ascetics are bound to greet you. I get in an auto rickshaw, which drives through the fog and faint morning light. The city is blanketed and chilled. Reaching the banks of ever flowing Ganga, I find the eastern horizon getting brighter but the sun is  hidden behind layers of fog. Winter seems to cast over the city an impregnable air. People and pilgrims are all under a spell of stasis. 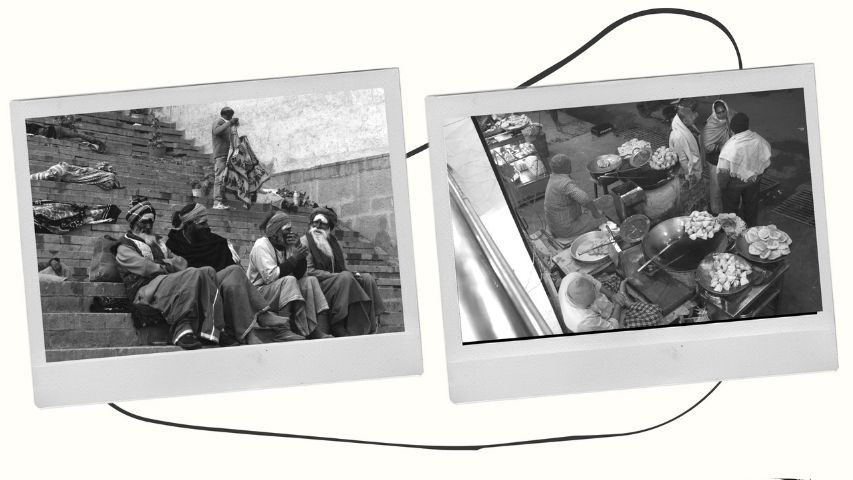 Yet the daily rituals go on defying the cold. Holy dips are taken at wee hours of the morning, no matter the tremors it sends up the spine. Sounds of bells start coming from the temples. The aspen smeared sages stay absorbed in puffs of smoke coming out of their chillums. The lone priest worships the new sun rotating the big brass lamp and distributes prasad to all those who have collected at the ghats. The day is about to roll. The city fascinates me the moment I am there.

The essential sights and sounds of the city remain unchanged throughout the year. The buzz on the streets, the inescapable chaos of the traffic, the dozing cows and bulls that lord over the city's main thoroughfare, the colourful montage of people, the hordes of pilgrims queueing up at the temples - these  lend the city a uniqueness that stays all round the year.

Winter brings with it something more. Covering up my body and face with thick woollens I come out to watch the dynamism of life and stand in front of a shop that is already crowded. In leaves neatly folded in conical shapes, they are serving hot samosas and kachoris. A bite into a kachori lets the steam out.  A wholesome breakfast summed up with a glass of tea is an ideal winter morning. What comes with winter is a rare delicacy of flavoured milk froth garnished with pistachios and slices of almonds. Delightfully called Malaiyo, the very sight of the dessert tickles the taste buds. Taking a small delicate spoon, one is dazed for seconds. I tried out the same in the streets of Lucknow but the taste was different. During winter in Varanasi, milk is boiled for long and then kept open in dew for hours to get that fluffy shape. 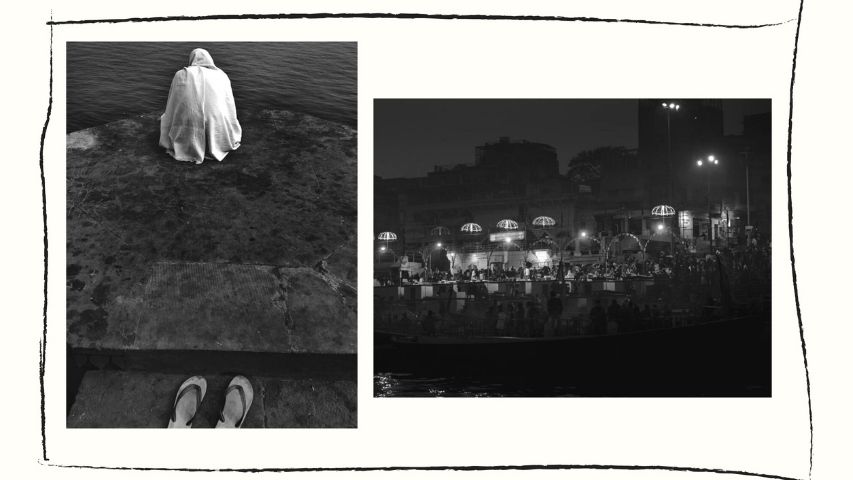 Winter comes on the wings of the Siberian gulls. Throughout the day they skim over the placid waters of Ganga - thousands and thousands of them making merry untiringly from dawn to dusk creating a marvellous spectacle.

The jetty floating inside the river is packed with visitors throwing morsels of food at the gulls. The white birds form intricate patterns while floating in the air and gliding over the ripples. Sometimes a stray gull perches itself on the long matted hair of a meditative saint who sits cross-legged with closed eyes above the steps of the ghats. 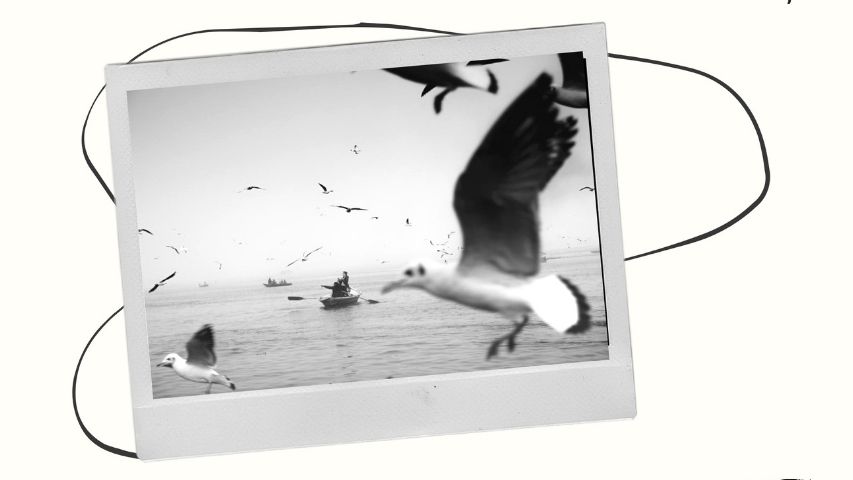 I am  amazed by the blend of stillness and frantic movement - at the contrast between meditative sombreness and youthful effervescence. Beside the taciturn sage in meditation, street children somersault in the river. Ritualistic mantras of deaths and the new-born are recited almost in the same breath. Standing at the middle of a burning pyre to my right and rows of holy men performing rites for the departed souls to my left, I stay numbed at the eternal journey of Life - the continuous see-saw of birth and death, union and separation, joy and sorrow and the endless streaming of life, everything seems to be in harmony.

Varanasi, despite having been tagged as a Hindu city, is secular and cosmopolitan. Walking from one end to the other beside the river, I see a maulvi, standing at the stairs and feeding the gulls. Some tourists with oriental features  sit in deep meditation. 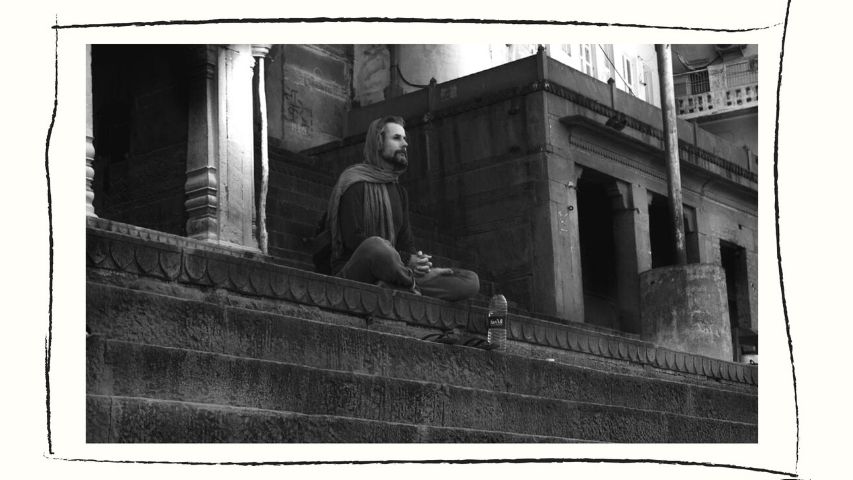 There are large contingents of South Indian people in one part of the city. Last year, there were quite a few foreigners with long beards and locks in hippie accoutrements and a cross pendant dangling around their neck. I saw one of them sitting on the stairs and playing on some eastern tune on a bamboo flute, maybe a raga, which years back the legendary Ustad Bismillah Khan used for riyaaz at his hut, declining the proposal of staying in the US.

The city seen from the boat floating day and night on the River Ganga is an experience. Ganga is that omniscient seer which observes the multitudinous roop and rasa of life. Settling on the narrow deck of a boat, I sit transfixed at the ripples of water as time slows down. Fog makes a huge blanket above my head again and through it I keep watching the city.

The tall structures, beside the river, stand like pillars of wisdom. Spirituality seeps in from everywhere. What a fascinating everyday life! A harmony in heterogeneity. The air is thick with the morning azaan of a mosque and the aarti of a solitary Hindu purohit. 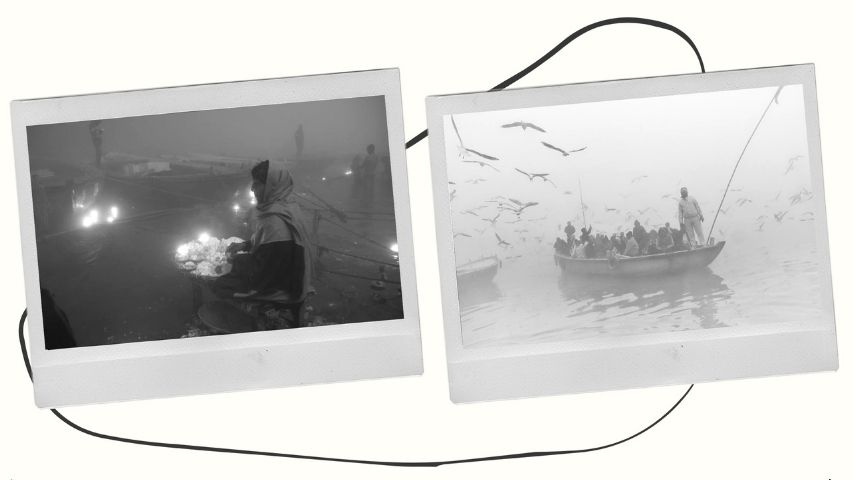 A sage immerses himself in his voyage of self discovery, charcoal keeps burning inside the brass pot to keep him warm. A wandering monk smears vermillion and ashes in a trance with only a stray dog and a sleepy ox witnessing his antics. The boat is floating parallel to ashen-faced men on the road. They are dancing and singing hymns in a trance. Some street children are dancing to the percussion beats of their cymbals and drums. And as I throw some food for the gulls, the boatman says, “Gulls are a god-send. In the winters they come as messengers and return to their abode with the names of those who do good on earth”

They say dying in Varanasi emancipates one’s soul from taking rebirth. Our soul is believed to  reach heaven and will be liberated from the trials of taking another human birth. My eyes are fixed on the boatman's oars slapping the placid waters. And so many images keep overlapping in the mind.