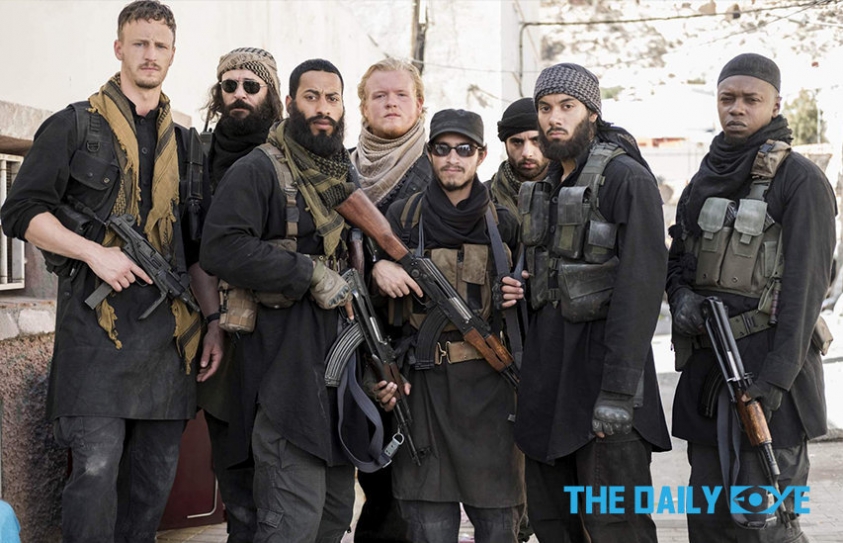 The State - Unflinching Drama on the IS death cult.

Somehow, we all agree to have squandered our hours away facebooking, but some people out there have ended up selling their own youth, unacceptably for the sake of false claims on restoring humanity. It’s no new subject as to how many people have been lured so far to join the ISIS through various means; but is it too late by the time one realizes the otiosity of it all?

The State reels out smoothly, with four Brits being welcomed into the cult— too much laughter and bro-codes being exchanged, that will make one quiz  promptly whether this drama tries to glorify the incendiary organization whose sedition has already caused mayhem worldwide? But that’s what says a lot about Kosminsky’s wondrous work and allows the following episodes to unpick that view.

The Brits are initially seen traveling from different parts to join the organization, beginning with a lot of laughter and many warm embraces- but what follows next is disturbing- arms, tears and brutality. They are taught to assemble many weapons of mass destruction, women are fettered behind the four walls, the new recruits are shown the clip of men being beheaded and ravaging is being celebrated.

The cast- Londoner Jalal (Sam Otto) knows what’s at stake – his brother also travelled from the UK to Syria to fight for ISIS and was “martyred” and is accompanied by his friend Ziyaad (Ryan McKen). Ushna (Shavani Cameron), a bubbling teenager embarks on this journey to fossick and marry the sort of fighter social media tries painting for her.

The drama is a very ingenious and clever take at projecting the human psychology, the truth behind the masked, faceless business and the shocking revelations that follow. The story follows British Muslims who join the terrorist’s organization only to get slapped by heart-wrenching atrocities. The quartet receive warm gestures at first- the novices are presented an all rosy picture of the death cult until they discover hints of things going awry. Soon you find them feeling victimized- the noose goes around their neck for they are petty humans or at least aren’t like those callous maniacs, but it’s too late by the time they realize and worse they did see it coming. Somehow you are filled with ruth for them who deliberately chose to join a cult so horrific by nature.

Shakira (Ony Uhiara) is a doctor by profession and motivated by state-building and a chance to test herself. And she’s inflicting this on her nine-year-old son, the sweet-natured Isaac (Nana Agyeman-Bediako), who she has taken with her. But soon Jalal and Shakira try to break through the chains and help everyone they could. But do they manage to escape from the clutches of this diabolic world or are there no ways out of this graceless empire?

Director Peter Kosminsky adds another feather to his cap with this phenomenal drama. The subject being much needed and the directing prowess so rad, nothing ever manages to beat his work and emerge superlative. Kosminsky has proved his mettle previously by whipping out some very original political dramas like The Government Inspector and The Project, which already claimed him to be the undisputed king of this genre.

You are definitely going to struggle to bring yourself to look at all the barbaric activities, blood-smeared scenes and little kids in their ten-somethings being groped into the cult- but that’s the thing about truth- sometimes you learn it the hard way.

The State is a Channel 4 platform’s original creation and can be viewed on this link: http://www.channel4.com/programmes/the-state/episode-guide