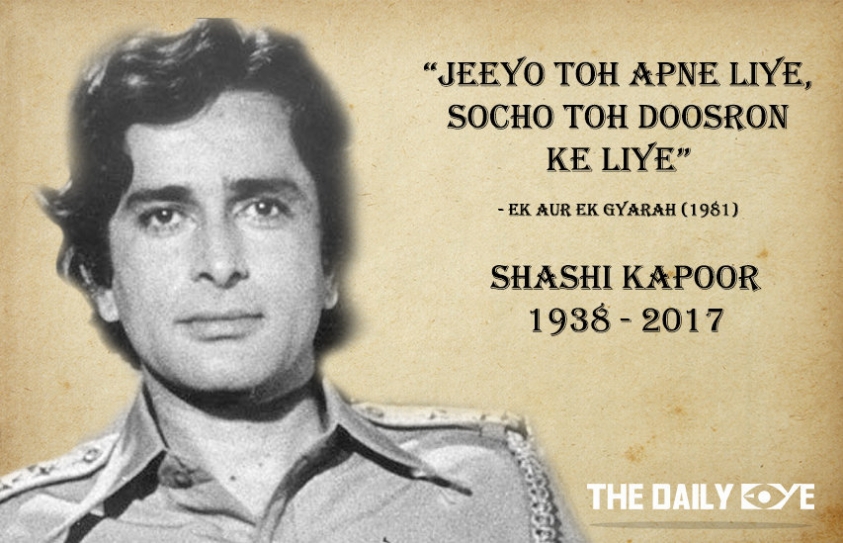 Shashi Kapoor - The Actor Without Airs Is No More

Shashi Kapoor, born as Balbir Prithviraj Kapoor, who was adored as the Adonis of Hindi Cinema and hailed as an actor with a global appeal of his own is no more. The embodiment of romance and charm who wooed the top leading ladies of the '70s and '80s on the silver screen and captivated millions of fans, died at 79 on Monday 3rd December, 2017 in Mumbai. The most understated Kapoor among the three Kapoor brothers- Raj, Shammi and Shashi, the Kolkata born actor who has left behind a legacy of his own films like Junoon, 36 Chowringhee Lane, Vijeta, etc besides super-duper hits like Jab Jab Phool Khile, Jahaan Pyar Miley, Pyar Ka Mausam, Kanyadaan, Sharmilee, Chor Machaye Shor and Haseena Maan Jayegi had actually made his debut as a child actor with his own elder brother Raj Kapoor’s film Aag and followed it up with Awara. I have had the proud privilege of meeting and conversing with the smart and suave gentleman of all times umpteen numbers of times in my 45-year-old career as a journalist on various sets including Satyam Shivam Sundaram and Bandhan Kache Dhagon Ka. To mourn his death, we reproduce this rare and frank interview with the then 48-year-old actor by JYOTHI VENKATESH, which appeared 31 years ago in FRONTLINE issue dated June 14-27, 1986. 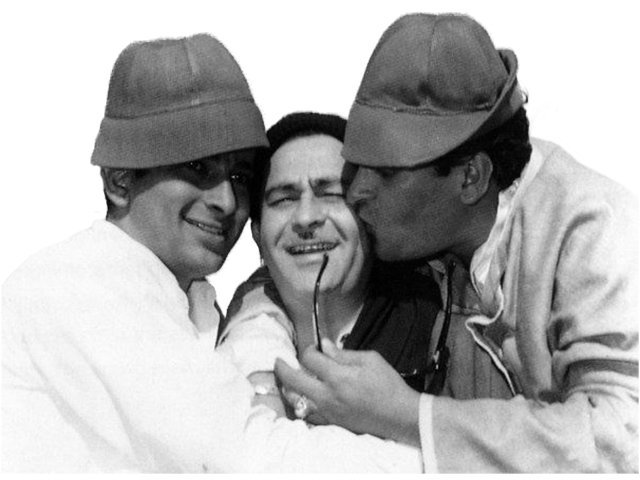 For this year’s national award winner Shashi Kapoor, the actor for every role, recognition has been belated but he is not planning rest on his oars and has ambitious plans ahead. Shashi Kapoor is an actor without airs. Not for him the star trappings of the others. If he is not at home when you call, he gets your message and calls you back. And yet he continues to be a busy star working in about 20 films right now.

An interview had to be conducted in between shots, when he was working in two films in the same bungalow in Juhu in the suburbs of Bombay. He was playing Mandakini’s father in Ravindra Peepat’s Hum To Chale Pardes whereas in Khushkismat, he was the young romantic lead opposite Swapna.

Shashi confesses it was a feeling of disbelief that he had on being informed that he had won the year’s national award for best actor for his performance in the controversial New Delhi Times. “Even though this is my 27th year of acting in films, I have never ever paid much attention to awards. I only wish they had given it to my wife Jennifer when she was alive, for her performance in my film 36 Chowringhee Lane. Frankly the awards mean nothing to me at this stage when I do not have her to share it with me.”

“In the fine arts there should be no races”, said Shashi. “It is unfair to all the other contestants. I am told I had to compete for the award with veterans like Sivaji Ganeshan and Gopi. It is unfair to them. I feel that the awards do not make any difference to either the actors or the films in our country unlike in the U.S where the Oscar can change the destiny of an actor or a film. In India the distributors refuse to touch a film that has won an award and the producers refuse to sign up an actor who has won one because the industry survives on popular Cinema.” 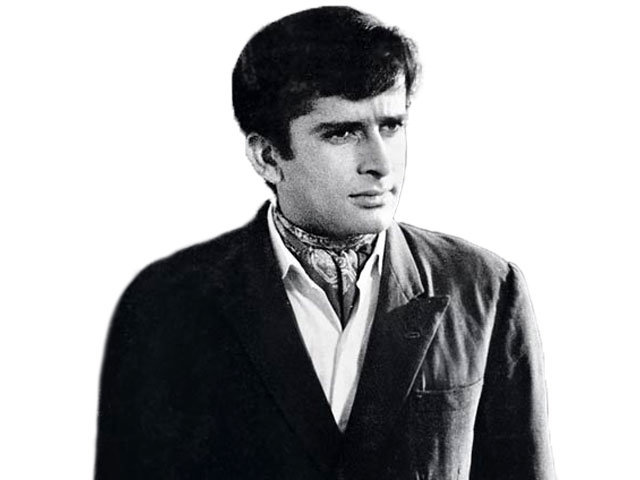 Shashi says he is no method actor. “I know the craft of acting. No pretensions for me. I do not believe in skipping a bath for three days just because I have to play an untouchable shudra. I am absolutely a switch on switch off actor who believes in transforming oneself only in front of the camera. As and when I get a role worth its salt, I do involve myself in it. But where are the roles and where are such filmmakers? Right now, I get the script for the films in which I am acting only a few minutes before I have to face the camera. How do you think one can do the home work for his role in such a situation?”

Recognition as an actor may have come at the fag-end of his career to Shashi Kapoor but he has done some myriad roles. “I have played different roles in different films right from the time I made my debut with Char Diwari. Whether it was Char Diwari or Householder, Shakespearewallah or Bombay Talkies or Haseena Maan Jayegi or for that matter Jahaan Pyar Miley, I have been proving myself in different roles. The only thing is that I had always maintained a rather low key and don’t believe in tomtomming about my plus points as most actors do today.”

He is the most popular character artiste today. And he has no qualms about admitting it. “I do not believe in hanging on to my youth or teenage. Let Jackie Shroff, Anil Kapoor, Sunny Deol and Sanjay Dutt come to the fore. It is high time I made my way for the youngsters to step in and take over from the old guard. I am 48 today. I have had a chequered career spanning 27 years and I have enjoyed 28 years of married life. I am today a contended man with two sons –Kunal and Karan and a daughter Sanjana who are grown up.”

But he is in the red financially after Utsav which cost him nearly 3 crores. However, Shashi has no regrets having made it. “Utsav has not dampened my spirits. Its delay did initially dampen my spirits but it was inevitable because half- way through, Jennifer was indisposed and I had no alternative but to suspend it and attend to her. For nearly 18 months, I could not concentrate on the film. As a result, the interest on the amount that I had borrowed mounted. Imagine how much I have had to pay on a principle of Rs 1 crore, not at the bank rate but the market price”.

He is on a signing spree as a character artiste only because he wants to earn whatever he can and then concentrate on making films the way he wants them to be made. “I am working in two shifts. There are even days when I am working in three shifts because I cannot say no to a producer if he comes to me with a sob story that he has got his sets erected and all the other stars required for the scene are present except me.”

Shashi is planning to launch a film for his son Karan Kapoor too, just as he launched Vijayta for his eldest son Kunal. “I will launch a film Sahebzada with Karan playing the title role. Of course, I will be also acting in an elderly role. Sridevi will be Karan’s leading lady and Prayag Raj, my friend from the good old days of the stage will direct it. I want to make Sahebzada as a quickie on a modest budget before I set out to launch an ambitious Indo-Russian co-production, a fantasy with Amitabh Bachchan and Sridevi in the lead. I have yet to finalize the director of the film. Amitabh has agreed to do the film, I am waiting for him to be free from his fresh commitments before I launch it. The film will be made on a budget of Rs 11 crores.”

He may take to direction sooner or later as and when he is able to free himself from his commitments- assignments wise as well as financially. However, he will continue to make films for his concern Filmwallas. “It is my ambition as a producer to have the great honour and privilege of having the greatest showman Raj Kapoor as the director of my film. I know it is like reaching for the moon but then I am sure one day I will be able to launch a film with Rajji as the director.”

Shashi is meanwhile toying with the idea of going in for television serials in a big way. “Amritlal Nagar will be writing a TV serial to be produced by me with Shyam Benegal as the director. The serial known as Parampara will deal with Indian culture and heritage. It will be about Indians and deal with the past, present and the future. Shyam has reservations about the serial because the serial Buniyaad has already been made by Ramesh Sippy but I feel that the scripts of Parampara and Buniyaad are poles apart. I am confident of launching the TV serial as early as possible. I am waiting for Shyam to be free from his commitments too.”

“I have done all my parts in real life too. As a child, a teenager, middle aged husband and now a widower. I will be failing in my own esteem if I were to fall in love and marry again after spending 28 years with Jennifer. However, I do not mind having a couple of affairs,” he signs off.

That’s Shashi Kapoor for you, a thorough gentleman, with a wicked sense of humour.