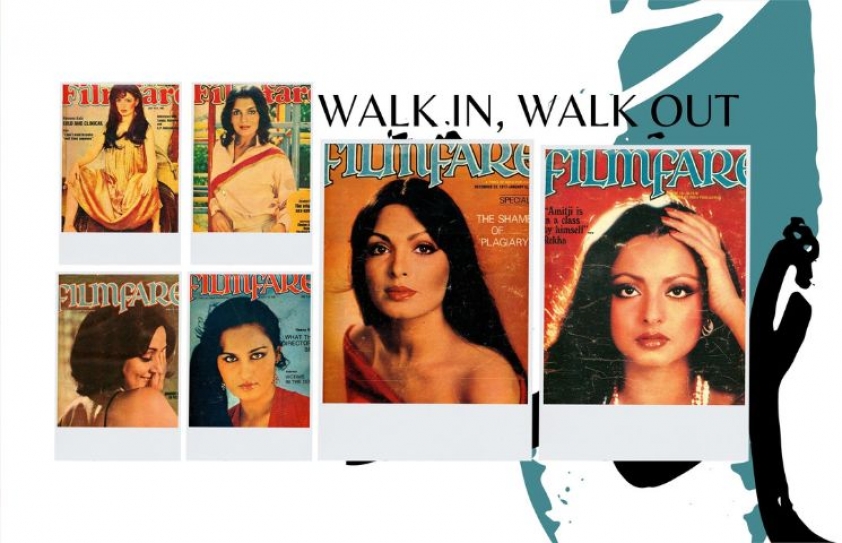 It has always been a regular phenomenon. Bollywood actors walk in and walk out of films signed and committed, without bothering about the consequences. And the sheer waste of time, energy and money. Since decades the names of certain actors, male or female, would be announced in the trade guides. But eventually there would be a replacement, often due to internal politics or favoritism, or pure unprofessionalism.

Some deals often faded out over monetary issues, malice and insecurities of other actors being cast opposite another or sometimes even out of past acrimony. There were times when some stars quit just for the fun of it, even sparking headlines. There were serious incidents too.

For a while, Madhubala had walked out of Mughal-e-Azam (1960) because she had differences with Dilip Kumar and Meena Kumari from Kamal Amrohi’s Pakeezah (1972), only to return. B.R. Chopra because of those differences had even gone to court over Madhubala’s absence from the sets of Naya Daur and subsequently replaced her by Vyjayanthimala.

But from the 1960s to the ‘80s, such cases of kabhi hanh kabhi na, were particularly rampant.

Hema Malini ruled the ‘70s. She was often in the news because of link-ups with her heroes like Sanjeev Kumar, Jeetendra, Girish Karnad and Dharmendra (whom she eventually married). She dropped out of Jeetendra’s home production Deedar-e-Yaar (1982), which featured Rishi Kapoor, Jeetendra and Tina Munim, ostensibly because she was not satisfied with her role. According to the tabloids there was more than what meets the eye since their marriage plans had backfired. She didn’t want to sign films opposite Jeetendra at that point of time. Eventually, the role was essayed by Rekha. Hema also dropped out of a multi-starrer Ek Do Teen Char to be produced by her secretary I.K.Behl. Result: the project was shelved. She was also signed for Shaan (1980) and Mahaan (1983) but differences had cropped up with the producers, which made her walk out. 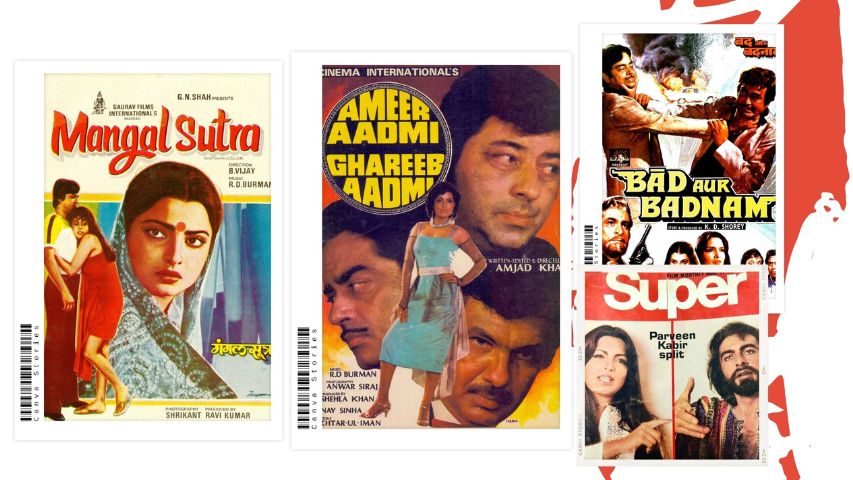 Reena Roy was at her peak in the early 1980s. She had a hit ‘jodi’ with both Jeetendra and Shatrughan Sinha. She had already been paired with Shatrughan Sinha in several projects, but nixed Bad Aur Badnaam (1984), claiming that she didn’t want their pair to be overexposed. Her exit paved the way for Anita Raj. Then Takkar (1980) with Sanjeev Kumar was rejected by her because of remuneration issues and Zeenat Aman replaced her. Reena was cast in Mangalsutra (1981) but she insisted on Kamal Haasan as her co-star instead of Anant Nag whom the producers had selected. The part eventually went to Rekha.

Parveen Babi was in tremendous demand during the 1970s and early ‘80s. The first time she left the country to be with her beau Kabir Bedi in Italy, she left quite a few of her projects mid-way. Yet, she did return to complete her assignments. It was the second time when she left the country due to her illness that the producers had to replace her. She was out of Prakash Mehra’s Jwalamukhi (1980), which had already been delayed by her absenteeism. Reena Roy was signed instead. She was also replaced by Reena Roy in Manmohan Desai’s multi-starrer Naseeb (1982). She had shot for a few scenes for Laawaris (1981) but after her disappearance she was replaced by Zeenat Aman.

Other films, which suffered due to Parveen Babi’s absence from India were Amjad Khan’s Ameer Aadmi Gareeb Aadmi (1985). Her song was retained while her role was essayed by Zeenat Aman. A similar case happened with Akarshan (1988), too, where her song was retained and Sonu Walia was signed instead. She was originally cast as Poonam in Namak Halaal (1982). The song Pag Ghungroo was recorded keeping her in mind. The lyrics read as Dil Yeh Kehta Hai Aap Apni Hain Paraayi Nahin, Sangemarmar Ki Hai, Koi Moorat Ho Tum. Since she went missing, Smita Patil was cast opposite Amitabh Bachchan. On Parveen’s return, she was paired by Mehra with Shashi Kapoor. Meanwhile, Zeenat Aman had already replaced her in Daulat (1982), Yeh Desh (1984) and Ricky (1985). 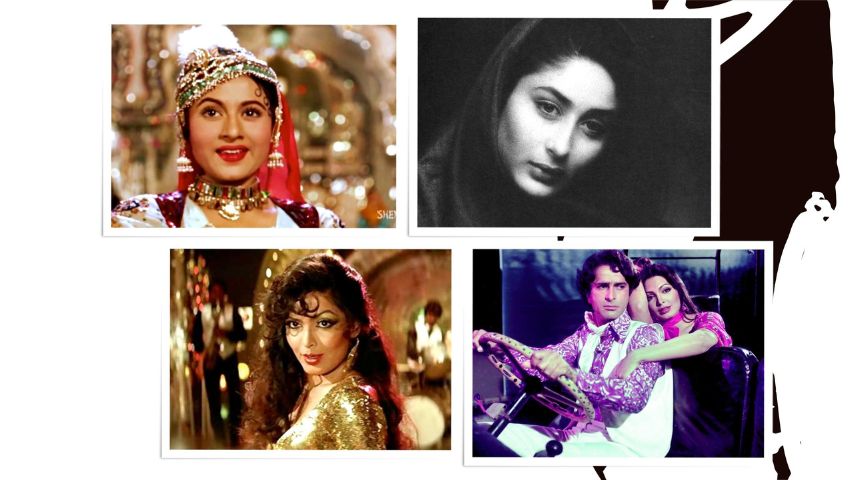 Dimple Kapadia was much-wanted in the ‘80s. Although her comeback films Zakhmi Sher and Saagar had not fared too well, the audience and the critics adored her. She was signed for Khuda Gawah (1992) by Mukul Anand but due to a dispute in her price, she walked out and Sridevi was signed for a higher remuneration.

Once again, Dimple was signed for Mahasangram but she was replaced by the much younger Madhuri Dixit. J.P. Dutta was in talks with her for Hathyar but the role eventually went to Sangeeta Bijlani. She had signed Sunil Dutt’s social Yeh Aag Kab Bhujegi and had started shooting for it but due to creative differences she staged a walk out after which Rekha stepped into her role. She was also signed for Shehanshah opposite Amitabh Bachchan but Meenakshi Sesadri did the film.

Parinda was another film Dimple was almost signed for as she was the first choice but the role was eventually done by Madhuri Dixit. She had signed Kartavya and was to play a strong elderly character role in the film alongside Sanjay Kapoor and Divya Bharti but at the last minute there was a change due to Divya’s untimely death, and Juhi Chawla was pencilled in. Dimple declined to be part of the the film since did not want to play mother-in-law to Juhi Chawla who was a few years younger to her. Aruna Irani had no such qualms.

Rekha threw a tantrum on the sets of Gulzar’s Namkeen (1982) and was replaced by Sharmila Tagore. She was all set to do a Tamil film with Kamal Hassan as her co-star but owing to her whimsical mood swings those days she walked out of the project. Kamal was so upset that he vowed never to work with her again.

There was a film announced by Chetan Anand’s son, Ketan, Registaan, with fanfare in the early ‘80s, starring Rekha. According to tabloids she said that she had been signed while insiders claimed that she was dropped as she was giving him date hassles. She was replaced by Zeenat Aman who was already working in his father’s film Haathon Ki Laakeeren (1986). Eventually, the jinxed film was shelved. More recently, Rekha was replaced by Tabu for Abhishek Kapoor’s Fitoor (2016). Rekha had done the look test and finalised her wardrobe and make-up but as reported by the media had decimated a chunk of the film’s overall budget. 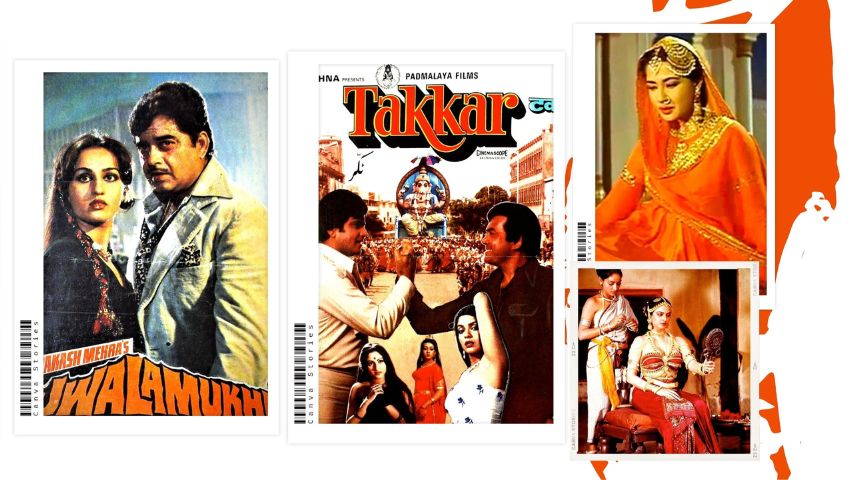 Poonam Dhillon, Padmini Kolhapure and Tina Munim, all dependable artists, were around at the same time. Yet, there was a constant Tom and Jerry-like chase going on. Poonam Dhillon was to star in Rajiv Rai’s Yudh (1985) opposite Jackie Shroff but she walked out at the last minute and Tina Munim was selected. Tina Munim also replaced her in Ramesh Behl’s Bachchan opus Pukar (1983).

The maximum number of alterations were evidenced in the Shashi Kapoor-produced Utsav (1984). Initially, the period film was planned with his friend Amitabh Bachchan as the hero but due to his dates unavailability he had opted out. Kamal Haasan, who was approached then, also quit. Padmini Kolhapure was to enact the second heroine (Rekha being the main one), cited date issues and was replaced by then newcomer Anooradha Patel.

Amit Khanna, a close associate of Dev Anand and executive producer at Navketan Films, after producing Man Pasand (1980), launched an ambitious project titled, Naya Zamana, but faced far too many blockades because Dev Anand was busy with his own bunch of films. Sanjeev Kumar was the next choice but walked out mid-way and finally the project was shelved. Rajesh Khanna was signed for Mohan Segal’s Jeevan Jyoti (1976) opposite Rekha but dropped out, saying it was a women-centric film and his role didn’t amount to much. He did return the signing amount though, and the film was shelved.

Nagi Reddy’s Shriman Shrimati (1982) had a stellar cast of Sanjeev Kumar, Raakhee Gulzar, Amol Palekar, Deepti Naval and Sarika. Raj Babbar who had been signed developed cold feet as there were so many big stars around him and quit. Enter Rakesh Roshan. out of the blue. And the film proved to be successful at the ticket counters. Shakti (1982) was initially announced with Dilip Kumar, Rakhee Gulzar, Amitabh Bachchan and Neetu Singh, who decided to quit the film as she was due to get married and hence Smita Patil was signed in her role. This can be seen in the trade papers.

In 2000, Kareena Kapoor made headlines when she thumbed down Rakesh Roshan’s film Kaho Na Pyar Hai, marking the debut Hrithik Roshan, owing to creative differences. Newcomer Ameesha Patel was signed on. Kareena Kapoor was supposed to do Karan Johar’s Kal Ho Na Ho (2003) but staged a walk-out citing price issue. Preity Zinta stepped in. Kareena also walked out of Milan Luthria’s Chori Chori (2003) after which Rani Mukerji was in. It was reported that Kareena was even considered for Hum Dil De Chuke Sanam (1999) and Ram Leela (2013) but opted out due to creative differences.

And of course, there was the infamous incident when Salman Khan created a ruckus on visiting the location shoot of Chalte Chalte (2003), featuring Shah Rukh Khan and Aishwarya Rai. The shoot was halted. To prevent such an incident from occurring again, Rani Mukerji was cast instead.

Thereby hang the tales of one actor’s loss, becoming another one’s gain.