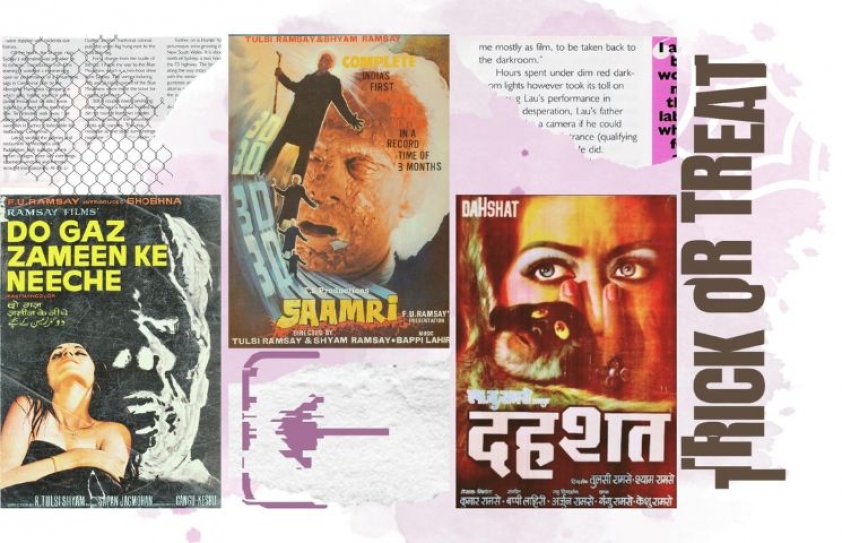 An inveterate fan of the Ramsay Brothers, film historian Dhruv Somani, writes on their cult horror movies, as Halloween approaches on October 31.

Horror has long been one of the most underrated genres of Indian cinema. However, with the advance of time, there has been a considerable rise in serious scholarships on horror cinema. Most of these academic studies are by students from the world over.

I have often received mails and calls from different parts of the world, asking for information on Bollywood horror films. A cult following has grown for the oeuvre of Ramsay Brothers, the pioneers or the fathers of Indian horror films.

Combating the big banner productions throughout the 1970s and the ‘80s, the Ramsays’ production house created a brand and a following of their own. When others tried to cash in on horror, they did so by dishing out films with similar storylines and backdrops of the Ramsay movies.

Having already covered most of these films made in Bollywood in my four-volume anthology, A Touch of Evil, on the eve of Halloween, I write on a genre, which has been closest to my heart, and on the production house whose films I have relished watching over and over again. 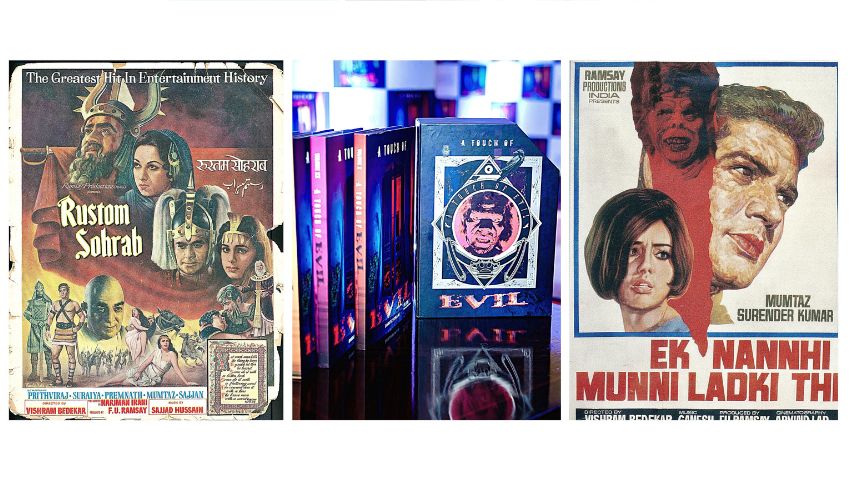 It all began with radio engineer Fatehchand U Ramsinghani, popularly known as F.U.Ramsay, moving from Karachi to Bombay after partition in 1947 and starting a new life altogether with a radio and electronics shop in the city’s Lamington Road. His heart was however set on Bollywood while he got together with some friends to produce his first film Shaheed-E-Azam Bhagat Singh in 1954. Rustom Sohrab (1963) soon followed, which did better than the previous release but both the films failed to impress the audiences.

A third film Ek Nannhi Munni Ladki Thi (1970) was made with a stellar cast where a seven-minute horror sequence caught the fancy of the audiences and was applauded as they walked in and out of the theatres only to watch that sequence over and over again. This was enough to plant the horror bug in the minds of his sons. The rest they say is history as the seven brothers worked together in different departments of filmmaking and gave nail biting films in the horror genre in quick succession. Out of the seven brothers, Arjun, Kumar, Tulsi, Keshu, Gangu, Shyam and Kiran Ramsay, most of the films were helmed under the direction of Tulsi Ramsay and Shyam Ramsay.

Films made before the Ramsays entered the scene were mainly based on the paranormal or on reincarnation. Often made on low budgets, the Ramsay films showcased monsters, beasts, and creatures with giant claws, horrifying red eyes, missing pupils, characters inhabiting attics and dungeons of ancient mansions, all scaring the daylights of women in distress and the audience. They belted out hit after hit. The audience related to the ambience of fear and the bizarre plots. Their films were often described as ‘sleaze and gore’ but yet managed an unshakeable connection with their fans. 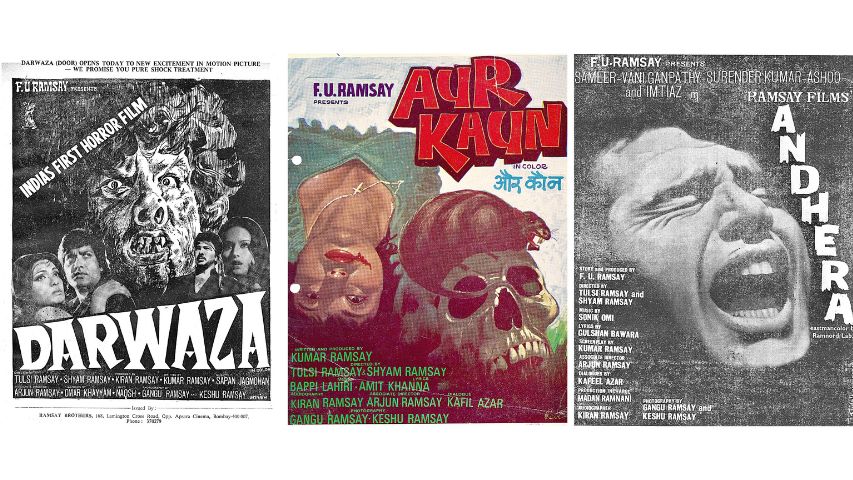 During the 1970s, the Ramsays made India’s first full-fledged horror film, Do Gaz Zameen Ke Neeche (1972), starring Surendra Kumar, Shobana, Imtiaz Khan and Helen. A major commercial hit, the film introduced the archetypal horror figure of a zombie. In 1978 they came up with yet another authentic monster scare-flick, Darwaza (1978), starring Anil Dhawan, Shyamlee, Anju Mahendroo, Imtiaz Khan, Shakti Kapoor and Sheetal. Darwaza again minted money even though it was banned for a few days due to its horror content.

There would be an ambulance waiting outside the theatres showing a hybrid monster in Darwaza. Amit Kumar made his debut as a singer with the track ‘Hosh Mein Hum Kahan’. Two films in the late ‘70s were the inordinately delayed Andhera, starring Sameer Khan and Vani Ganpathy, and Aur Kaun, with Sachin, Padmini Kapila, Rajni Sharma and Om Shivpuri. Released in 1979, both made waves at the ticket counters. 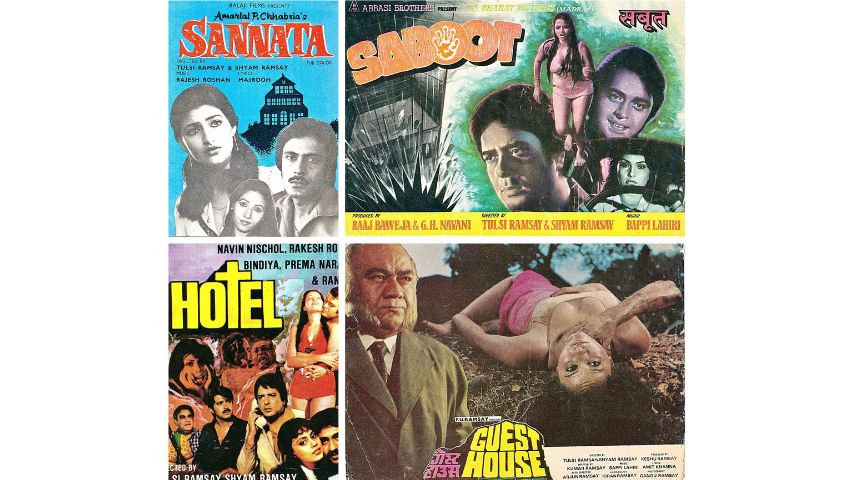 The ‘80s, saw them at their peak form with Saboot (1980), Guest House, Sannata, Hotel and Dahshat (all in 1981). Dahshat showcased an over enthusiastic scientist whose experiment misfires turning him into a bat (somewhat on the lines of Dr. Jekyll & Mr. Hyde). By this juncture, they had started working with more established actors like Navin Nischol, Rakesh Roshan, Deepak Parashar, Vinod Mehra, Vidya Sinha, Kajal Kiran, Sarika, Bindiya Goswami, Prem Kishen, Rajan Sippy, Swapana. The same year, they directed Ghungroo Ki Awaaz produced by Vijay Anand featuring himself opposite top star Rekha.

The year 1984 was a significant one as their film Purana Mandir again hit the bull’s eye at the box office. Made on a modest budget starring Mohnish Bahl, Aarti Gupta, Satish Shah, Puneet Issar, Sadashiv Amrapurkar, Pradeep Kumar, and Ajay Agarwal as the monster Saamri, it was the second highest grosser for the year. It was in competition with Amitabh Bachchan’s Shaarabi, which was at the top position followed by Purana Mandir at number two. 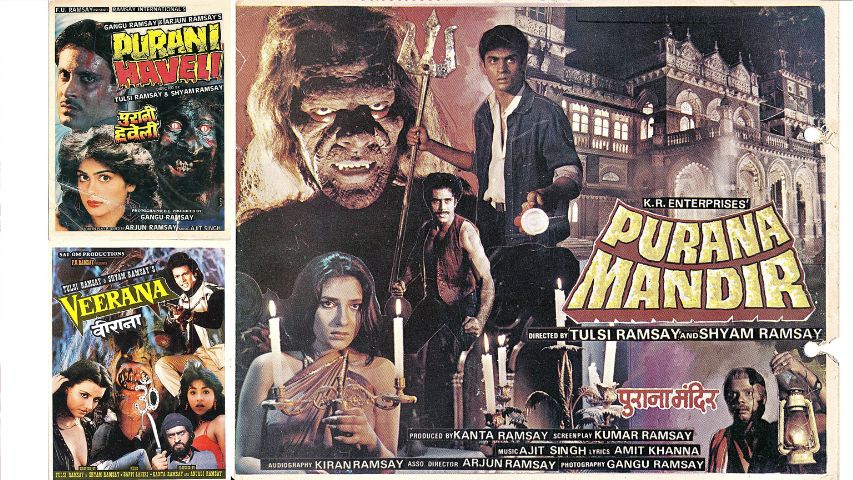 Purana Mandir completed 38 years of its release recently. It was released on October 19, 1984.  I can vouch for the fact that Purana Mandir is one of the most adored films among Bollywood’s horror movies.

Incidentally, Veerana is one of the most watched films on OTT today. Just recently on the eve of Halloween 2022, Bollywood Crypt hosted an event in Bangalore to honour the Ramsay Brothers where they had planned a World Premier Screening of the iconic film for the first time ever in its fully resorted 2K format before its official launch of a Blu-ray version with their international partner US Blu-ray HD movie label Mondo Macabro.

During the 1990s the Ramsays flashed yet again with Bandh Darwaza (1990) based on a vampire creating havoc in a small town. A hit again, it starred Hashmat Khan, Manjeet Kular, Vijayendra Ghatge, Kunika, Satish Kaul, and Ajay Agarwal as Nevla the vampire. This was one of their last money spinners.

Other films followed. The banner’s Shaitani Ilaaka (1990), Aakhari Cheekh, Ajooba Kudrat Kaa (1991) and Mahakaal (1994) fared reasonably well. To keep in step with the altering times, Tulsi and Shyam Ramsay along with generation next - Deepak Ramsay conceived the Zee Horror Show for television. It was telecast from 1993-1998 showcasing stories of four or five episodes, a common practice on the OTT channels today. They remained ahead of their times. Some loved their films, some hated them, but none could ignore them. 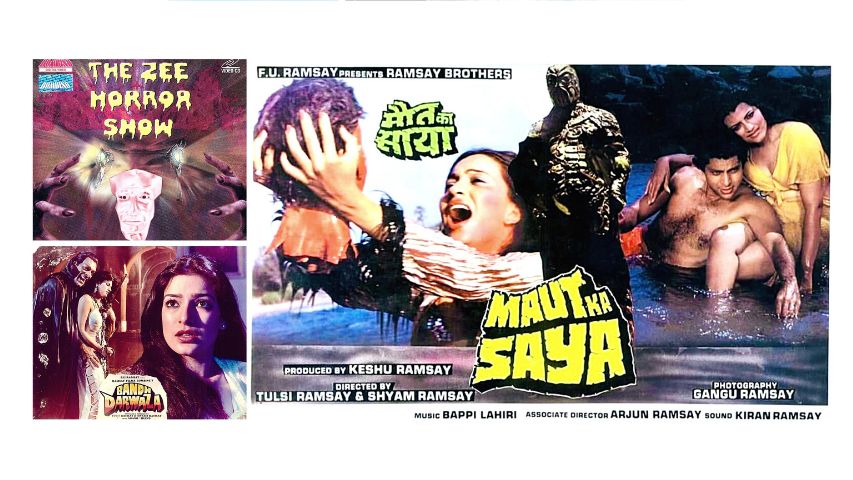 Their films were often classified as B-grade, sleazy efforts with small-time stars. That is an off-the-mark notion. In Ghungroo Ki Awaaz, they had worked with Rekha and Vijay Anand, considered to be one of the finest Bollywood directors of those times. Obviously, Vijay Anand must have detected something special in the brothers to offer them a film to direct for his banner.

They had also directed the extremely successful Sannata and Hotel for outside producers. In fact, a few years ago there was an announcement by a producer to remake Hotel.

Then there was Khoj (1989), headlining Rishi Kapoor, Naseeruddin Shah, Kimi Katkar and Danny Denzongpa. The same year came Saaya starring A-listers Shatrughan Sinha, Poonam Dhillon and Danny. Come to think of it, Shatrughan Sinha had worked with them right at the outset of his career in Ek Nanni Munni Ladki Thi (1970) with Mumtaz, and later in Telephone (1985) opposite Deepti Naval and Parveen Babi. Aarti Gupta who had worked with them in Purana Mandir followed by Saamri 3D and Tahkhana, was considered a lucky mascot by the Ramsay - she always has wonderful things to say about all the brothers and the family. 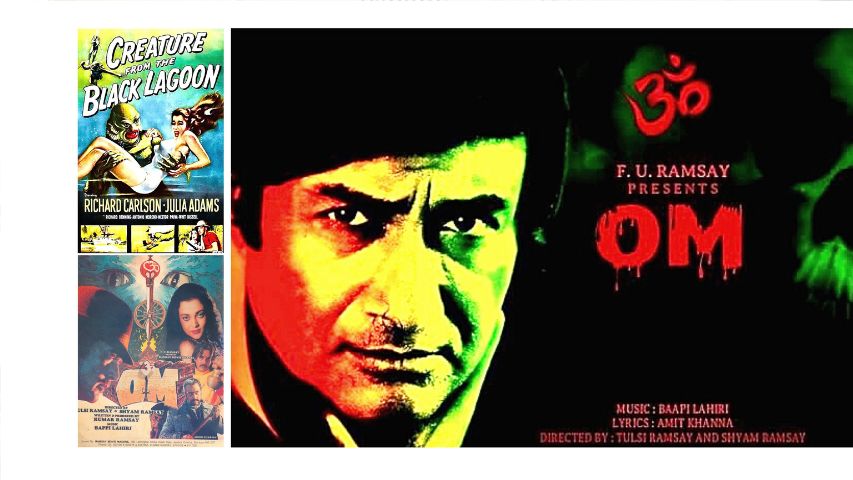 Some projects announced by them made headlines in the trade papers. Like Maut Ka Saaya (1982) starring Vijayendra Ghatge, Sachin Pilgaonkar, Kanwaljit Singh, Javad Khan, Kalpana Iyer, Rajni Sharma, Geeta Behl, Asha Sachdev, Anil Dhawan, Deeraj Kumar and Sujeet Kumar. The film was almost ready but due to some technical glitches it could not be completed. Maut Ka Saaya was inspired by Jaws (1975) and Creature from the Black Lagoon (1954). They had tried to create a creature from underwater.

Another film, which had their fans excited was Om. Not many are aware that initially Dev Anand was signed as the main lead but he had to quit the project due to date issues as he was busy with directing another film. Rajesh Khanna was then signed up. With Khanna in the cast, it was supposed to have a massive budget, and would also feature Mandakini, Kabir Bedi, Kulbhushan Kharbanda, Gulshan Grover, Prem Chopra, Raza Murad, Preeti Sapru. Unfortunately, after shooting seven reels, it had to be shelved. Rajesh Khanna had no more dates to spare as he had joined politics.

Last but not the least, they had announced a film titled Kohraa in the early 1990s starring Zeenat Aman. However, it never got off the ground and remained a trade announcement.

Unarguably, horror films of Indian cinema are symbolised by the Ramsay Brothers. The Kings of horror cinema deserve every bit of critical attention they have been getting, even if it has been belatedly so.