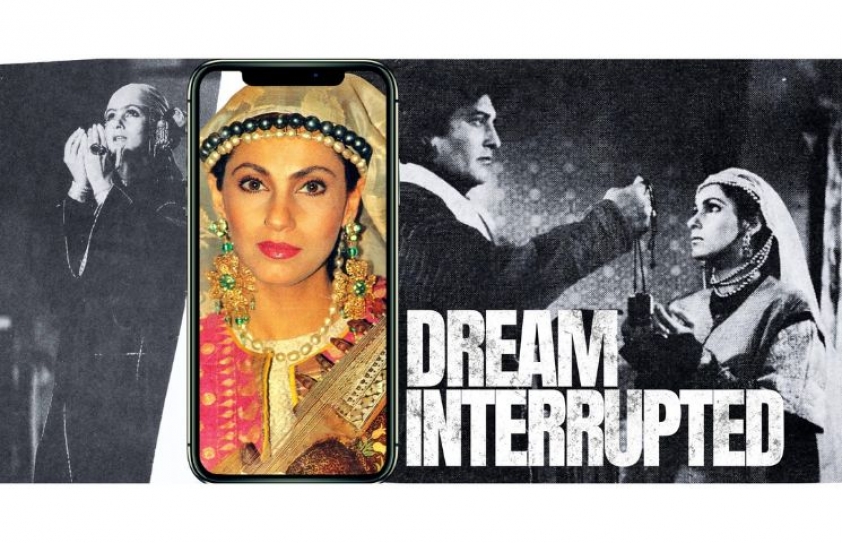 Film historian Dhruv Somani laments the fact that Muzaffar Ali’s Zooni (1989), with Dimple Kapadia in the title role, could never get to the finishing line.

Kashmir is often called heaven on earth. Cradled high up in the Himalayas its natural beauty, lush green valleys, glistening lakes, and spectacular Mughal gardens with fountains have inspired people from all over the world, be it filmmakers, poets or tourists.

Habba Khatoon, a Kashmiri poet in the 15th century, was born in a poor family of farmers in a small village. She was beautiful from birth and was named Zooni (the moon). In keeping with tradition, she was married at an early age to a local who also came from a modest background. But he could not understand her skills as a poet and often disapproved of her being a writer. Worse, a hostile mother-in-law wanted her to take care of the daily household work. Sick and tired of such a torturous and mundane life, she moved ahead and divorced her husband.

Very soon she was noticed by none other than Yusuf Shah Chak (the then ruler of Kashmir). It is said that it was love at first sight for both when Chak saw her for the first time reciting her poetry in the lush saffron fields. Later she was married to the emperor and was renamed as Habba Khatoon – The Empress of Kashmir.

As time went by, the Mughal emperor Akbar had Yusuf Shah Chak arrested for treachery and banished him to Bihar. Heartbroken, Khatoon left the palace with her little daughter and lived in a small hut by the banks of river Jhelum, composing soulful poems about love and parting. Her legendary beauty and melodious voice ensured that her poetry became extremely popular around Kashmir and remains so in the valley even today, more than 400 years after her death in 1609. 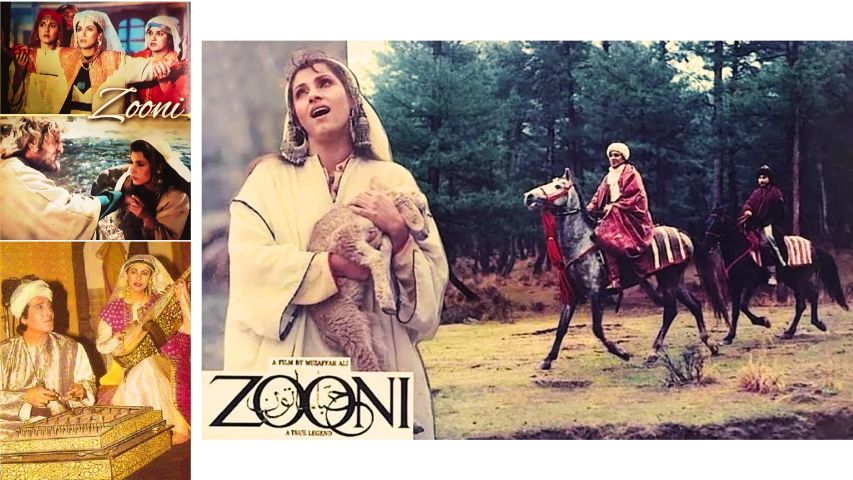 Bollywood filmmakers expressed a deep interest in her story and tried to make a film on her at several occasions. Early in the 1960s the great Mehboob Khan was the first one to announce a project on the life of Habba Khatoon. The announcement itself created a hype as it was to star Saira Banu in the title role with Dilip Kumar as Yusuf Shah Chak. Unfortunately, Mehboob Khan passed away in 1964 and the ambitious venture was shelved.

Around the 1980s, B.R. Chopra seemed keen on making a film on the life of the poet. Zeenat Aman was approached for the title role of Habba Khatoon opposite Sanjay Khan who was shortlisted to play Yusuf Shah Chak. Naushad was to compose the music.

All charged up he immediately recorded a beautiful ghazal rendered by his favourite singer Mohammed Rafi. It is said that while recording the ghazal ‘Jis Raat Ke Khwab Aaye’, Rafi Saab had wept profusely and refused to take any payment. This was also the last song he recorded for Naushad before he passed away on 31st July, 1980. According to my conversation with Zeenat Aman, even though one song was recorded for the film, it remained as just an announcement and nothing else. The untold story of the poet languished as a script on paper and was labelled as jinxed by many.

The third and widely discussed announcement came from director Muzaffar Ali who launched the film as ‘Zooni’ (the title Habba Khatoon had been already registered by B.R. Chopra who refused to part with it) somewhere in the late 1980s starring Dimple Kapadia in the title role opposite Vinod Khanna as Yusuf Shah Chak, Shammi Kapoor as Emperor Akbar along with Sushma Seth, Pran, Leela Naidu, Dalip Tahil, Pearl Padamsee, Raghu Khosla, Pammi Raina and Navneet Nishan in supporting roles. Muzaffar Ali wished to shoot the film covering all the different seasons in Kashmir and was keen to make two versions, an English one for an international audience and one in Hindi. The then Chief Minister of Kashmir Dr. Farookh Abdullah also came forward to help the director with raising finances and whatever resources available to shoot. 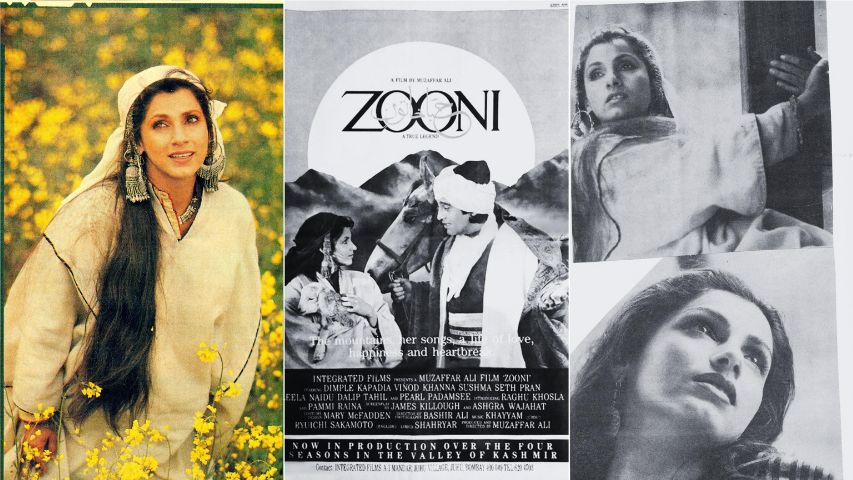 The shooting progressed well. The music director chosen for the film was Ali’s favourite Khayyam Saab who had collaborated on the magical score of Umrao Jaan. He came up with some brilliant songs in the voice of Asha Bhosle. The music for the international version was to be done by Oscar winning Japanese composer Riyuchi Sakamoto (of The Last Emperor fame).

An American fashion designer Mary McFadden was assigned to create the costumes for the leading cast as well as for a village consisting of around a thousand people. The designer was internationally renowned for creating distinctive costumes, which reflected her avid study of ancient and ethnic cultures. She was known to add her own exotic details and accessories on stunning fabrics. Two big sets were constructed on the outskirts of Srinagar for the shoot.

Major footage of Zooni was shot by 1989. The director had captured two seasons of the valley after which dissidence broke out in the valley. There was constant disruption and cancellations of the shoot, which came to a grinding halt in 1990. Muzaffar Ali along with the leading stars kept their fingers crossed waiting for better days to come but in vain. Some fabulous stills on the sets were published in Filmfare magazine with the stunning Dimple Kapadia as Zooni, carrying a baby mountain goat, along with Vinod Khanna.

As time went by Dimple seemed tad disappointed about her film not moving ahead. She was often heard asking Muzaffar Ali about its fate and would joke that if the film ever released it would be called Jooni (old) instead of Zooni. In fact, she was so gung-ho about the project that she even advised Muzaffar Ali to cast Twinkle, her daughter and reshoot the film. It was also a difficult time for the director, who lost his father and also the delay plunged him into a financial mess.

Finally, Zooni had to be shelved. The two sets in Kashmir remained there, which were used by local films and T.V. serials. It is believed that Dimple gave one of her best performances in Zooni and if it had been released it would have made her legendary (though I consider her to be legendary even today). 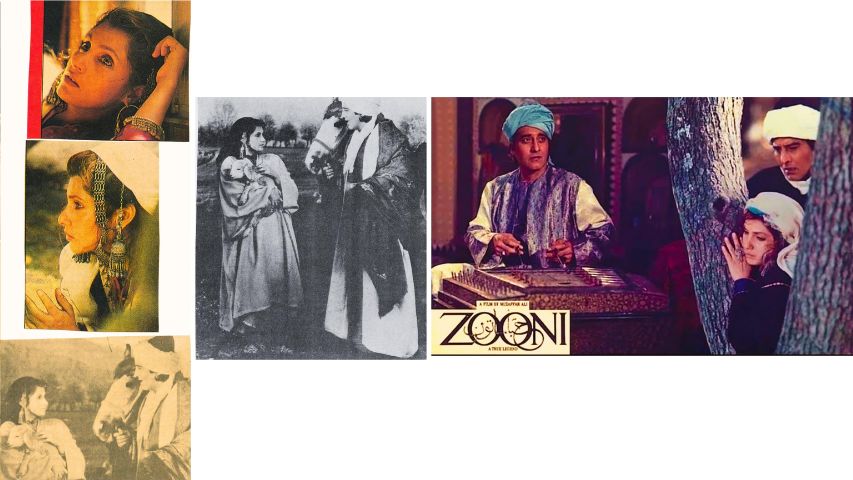 Incidentally, a Kashmiri film was eventually made on Habba Khatoon for Srinagar Doordarshan in the 1970s, on the poet princess starring Rita Razdan and Ghani Khan, which is rated as one of the most popular Kashmiri films ever made.

I was lucky to have heard one of the recorded songs of this doomed film ‘Tere Bin Yeh Jeevan’ sung by Asha Bhosle and I must tell you that it is nothing less than mellifluous. According to musicologists, who have heard this album and have the songs with them, it is indeed a masterpiece. Hopefully, some producer may buy the rights and use the songs sensibly in an appropriate film in the future. Every time I hear its hauntingly beautiful song, all I can imagine is the gorgeous Dimple Kapadia in the scenic valleys of Kashmir.

As a postscript, it may be mentioned that two years ago, Muzaffar Ali and his daughter Noor, made a 20-minute video film titled A New Dawn in the Valley. And Noor has stated that, “One night I couldn’t sleep after seeing the haunting images of dad’s ‘Zooni’. So, I just wanted to see Kashmir, my own land and just check it out for myself. They are building new roads, planning to set up IIMs and IITs.”

She is seen interacting with the girls of the Valley, including an architect, another a designer, still another a horticulturist. "They are so inspiring," she says.

So, one can definitely assume that Muzaffar Ali’s labour of love for the legendary poet Habba Khatoon must have narrated a timeless story to be cherished forever. Alas, the film Zooni will remain an unfulfilled dream for me and many others.